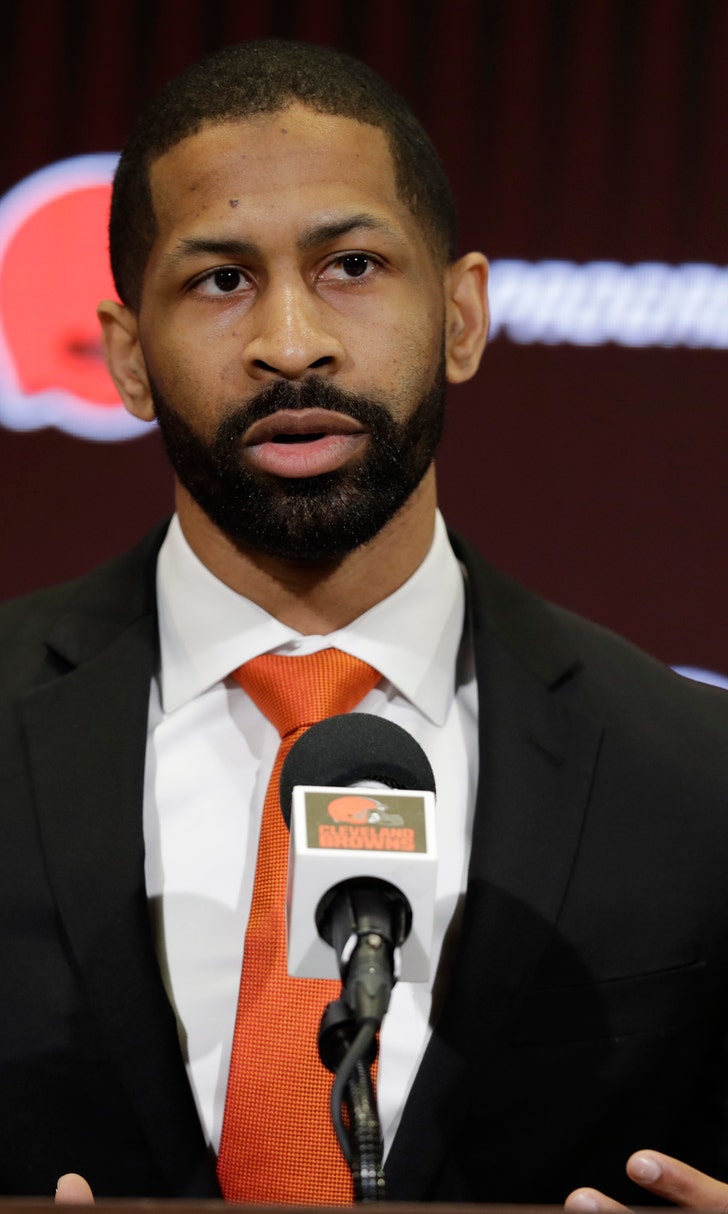 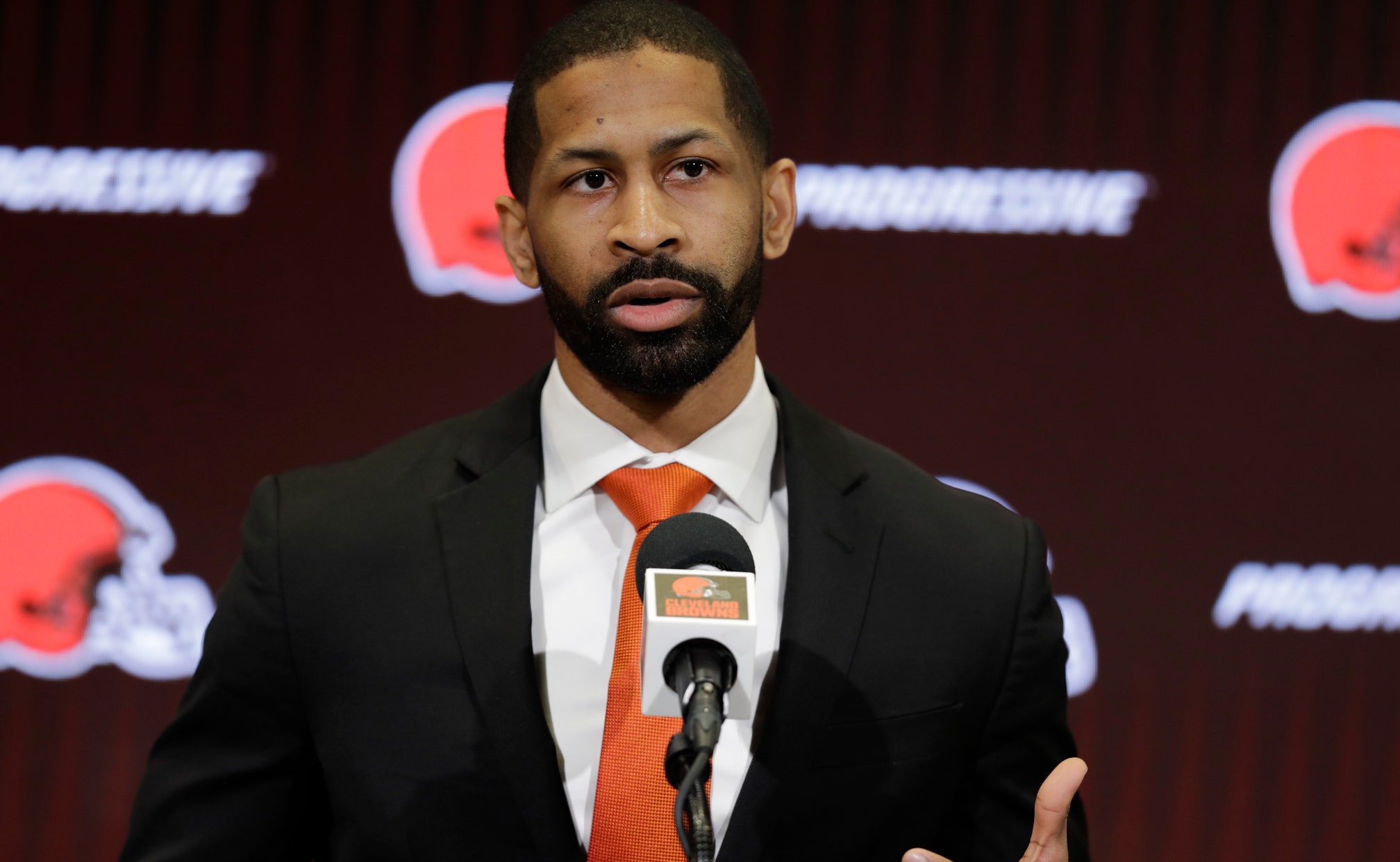 CLEVELAND (AP) — Andrew Berry’s draft debut as Browns general manager was undeniably unique and ultimately unforgettable. It’s way too early to know if it was successful.

The NFL's youngest GM stuck to his plan and addressed Cleveland's most pressing needs in this stay-at-home draft, which gave everyone a peek at Commissioner Roger Goodell's basement and provided sports fans a much-needed respite from weeks of being quarantined because of the COVID-19 outbreak.

This was Berry's first draft with final authority over which players would be picked. He had previously been a part of draft rooms in Cleveland and Philadelphia, but this time it was all in Berry's hands and Browns rookie coach Kevin Stefanski was impressed with how his boss handled things.

“I was very impressed with how he operated,” Stefanski said. "He knew when to have everybody be very quiet and he knew when to take input. He looked like a seasoned vet to me.”

Berry suppressed the urge to make a major move in the first round and landed Alabama tackle Jedrick Wills with the No. 10 overall pick. There were other options, but Berry stayed true to his board — he claimed the Browns had Williams ranked atop a talented class of tackles — and now has a protector for quarterback Baker Mayfield's blind side.

Wills' selection underscores a strong connection between Berry and Stefanski, who share Ivy League backgrounds and vision for how the Browns should be built. It hasn't always been that way in Cleveland, where power struggles have been the norm.

Maybe those days are finally over.

“We have a ways to go,” Stefanski said. "We are definitely not where we want to be, but I am appreciative of the group we have been able to put together to this point.”

Berry said his working relationship with Stefanski bodes well for the Browns.

“I love working with Kevin," he said. ”His insight, his calmness, his intelligence, it really does not matter the situation that we are dealing with, and certainly his presence is more than appreciated over the course of the last few days, going through the draft. I really could not ask for a better partner, really in any situation and I am really pleased with how our first drafts has gone as a group.”

If there was a thread connecting Berry's picks it was pedigree.

He added Wills, from one of the best programs in the country, along with a pair of LSU standouts — safety Grant Delpit and linebacker Jacob Phillips, who helped the Tigers win a national championship last season.

Florida Atlantic tight end Harrison Bryant was voted the nation's best at that position, Washington center Nick Harris was voted his team's most inspirational player and Michigan wide receiver Donovan Peoples-Jones has been on the radar of NFL scouts since high school.

The Browns concluded the draft Saturday with three picks, returning to the offensive side after taking three defensive players Friday.

The first brought a smile to Stefanski as Cleveland selected Bryant in the fourth round. Bryant is certain to get plenty of playing time under Stefanski, who prefers two-tight-end formations.

“The more we have in the room, the merrier,” Stefanski said.

With the No. 160 pick, the Browns selected the versatile Harris and then concluded their picks by taking Peoples-Jones, a player who didn't fulfill high expectations in college and could have a significant role in Cleveland.

“There is a lot this kid can do,” Stefanski said. “Then, it is going to be a matter of him showing it to us.”

The Browns showed some southern bias.

And while Berry and Stefanski insisted the run of SEC players was more coincidence than planned, the coach acknowledged it's a bonus to get players accustomed to the big stage.

“We did not go into this saying, ‘Let’s only draft SEC players,’" Stefanski said. "Now, if you are only going to draft from one league, it probably would make sense to draft from that league. I can tell you, though, when you are watching these guys, the lights are bright in that conference and to see the guys perform under those types of elements certainly does not hurt in evaluation.”

There's more star power than ever in the AFC North.

With top pick Joe Burrow now Cincinnati's quarterback, and Lamar Jackson, the NFL's reigning MVP running loose in Baltimore, the Browns are going to have their hands full for years to come.

Berry said he didn't base any of his decisions on moves by the Ravens, Bengals — or Pittsburgh Steelers.

“We are not going to build our team or build our defense just with those two players in mind, but we understand the challenges we face moving forward against two very talented young quarterbacks,” he said.

The 2021 draft is scheduled to be held in downtown Cleveland, but the uncertainty about mass gatherings — as well as the success of this year's virtual undertaking — could alter the league's plans.

The Browns currently have 10 picks next year after acquiring a third-round pick from Indianapolis on Friday.