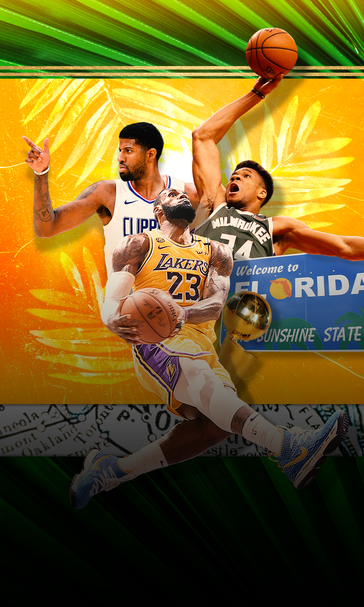 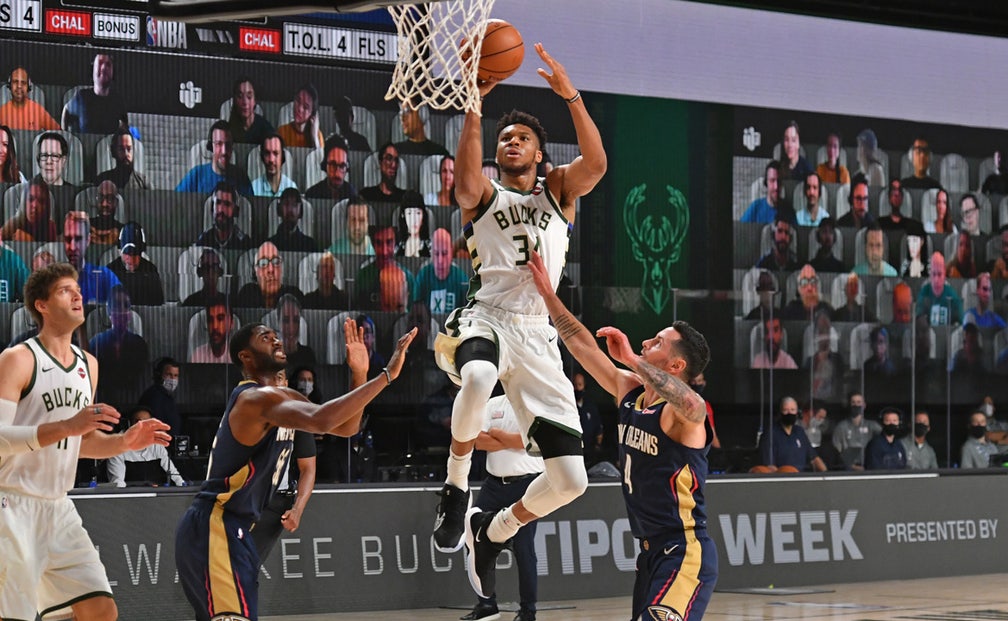 The NBA Bubble Enters The Spotlight

I’ve never thought about bubbles as much as I have in 2020. Partly because I’ve been enjoying an automatic bubble machine this summer with my three-year-old niece and one-year-old nephew, but mostly because the NBA is attempting to play basketball in a carefully controlled environment to insulate against COVID-19.

It was easy to be skeptical of the metaphorical bubble in Orlando meant to seal off thousands of people from a virus. But unlike fragile spheres of soap pumped into the air, this bubble actually seems to be holding up.

It’s kind of remarkable what the NBA has been able to do — on July 29, zero out of 344 players’ tests came back positive. If they do, there are strict plans in place for isolation and preventing the spread of the disease.

I’m thrilled the league’s plan seems to be working. Mostly for everyone’s safety, but also because ... I want to watch basketball.

Games resume on Thursday, and if you haven’t been paying close attention, you may have lots of unanswered questions from March until now. Such as ... can LeBron and the Lakers take home the trophy? What’s the deal with the NBA "snitch hotline"? Why is J.R. Smith in Orlando? What’s an asterisk? Should you put $100 on the Kings to win it all for a chance at $30,000?

I’m here to help you out, with a list of what I’ve deemed important to know about the situation in Orlando.

1. If I never hear the word “asterisk” again, it’ll be too soon

Seriously, who cares? We’re in the middle of a global pandemic, and you're worried about whether this year’s Larry O’Brien Trophy will “count” the same way? You think anyone’s going to look back on 2020 and be like, “Well, I’m sure that championship was won under normal circumstances!”

No! We don’t need a piece of punctuation next to a date to remind everyone what “the deal was” this year.

And if we did need one, don’t you think it should be an exclamation mark? I can barely string sentences together or text people back these days, so winning a championship should come with one of those “sent with confetti” settings on an iPhone. Not some dumb star that signifies an afterthought.

2. What’s the deal with the schedule?

I forgot what week the NBA season was in when the sports world ground to a halt after Rudy Gobert touched a bunch of microphones, but my research tells me it was Week 22.

So the games pick back up with two on Thursday: Jazz-Pelicans and Clippers-Lakers. Friday has six matchups, and then we’re basically off to the races for the last eight regular-season games.

Once those are done, there will potentially be play-in games for the eigth seed in each conference, then the playoffs will proceed as normal.

Is it strange without fans? Yeah. But everything is strange right now, and the NBA is managing to still put a good, if different, product on TV. If the scrimmages are any indication, we’re going to see some cool camera angles, for example.

3. This is NBA summer camp

There’s a level of freedom that players are afforded in Orlando that they haven’t experienced in….almost forever. During an interview with Bleacher Report’s Taylor Rooks, the Celtics’ Kemba Walker talked about how cool it was to see LeBron strolling around the lobby of the hotel without tons of security or fans angling for a glimpse.

In addition to some unusual peace, guys seem to be having a pretty good time when they’re not on the court. The Thunder played cornhole…

So maybe the correct analogy is less “summer camp,” more “the first few days of college when everyone’s back but classes haven’t started yet in the fall.”

4. LeBron has continued to out-LeBron himself

I’m sorry, but dunking around guys half your age while rocking gray flecks in your beard during the worst year ever is a flex to which I cannot help but bow down.

5. In case you forgot, here’s what the oddsmakers are saying about which team has the best shot to win the Finals

Amid all of the discussion about how teams will play, it’s been hard to remember what the actual quality of play will be like. Here’s who FOX Bet has as the top five contenders:

I personally feel great about the Kings at +30000.

6. The Raptors are screwed

I know Toronto shook off the Drake curse (the one where Drake roots for you and you lose) last year, but I think they are toast in 2020. Because Drake sent the entire team candles for their rooms in the bubble.

That’s basically like setting up a shrine to your own bad juju. I don’t feel good about this and would advise the Raptors not to light them if they want a chance of winning.

7. JR Smith is not popping the bubble

The Lakers signed J.R. Smith when Avery Bradley announced he wouldn’t be traveling to Orlando because of concerns about his family.

My first reaction was ...

….because the last time LeBron and J.R. played in the playoffs together, J.R. lost track of time and ran out the clock on his own team.

I had a hard time believing that the NBA was going to trust J.R. with the sanctity of the bubble, but he was, surprisingly, not the first player to visit a gentlemen’s club (more on that in a moment). Instead, J.R. has thrived in Florida, sinking deep shots and leaving LeBron sufficiently impressed.

8. Lou Williams risked it all for wings

It was always going to be interesting to see which player managed to pop the bubble first, but I wasn’t expecting the Clippers’ Lou Williams to sneak out for wings at a gentlemen’s club in Atlanta.

Williams had a family emergency that necessitated leaving Florida, but when his rapper friend Jack Harlow posted photos on instagram of the two of them at Magic City in Atlanta, people were like…

Williams defended himself, saying that he just stopped by Magic City because he likes the chicken wings.

Look, Williams’ really does love those wings. He orders them there so often that Magic City even has some named after him. They look amazing:

Was it dumb to go to a restaurant in the South when cases are rising and the health of an entire league rests on players’ individual shoulders? Yeah. But the league’s protocols went into effect, Williams was quarantined, and things seem to be okay. Hard to be on a high horse about this, because if you’ve ever had a transcendent chicken wing, you know how hard they are to resist.

9. The NBA hotline — and players’ tweets — will provide us with the “THIS LEAGUE!!!!” drama we so desperately crave

I don’t know about you guys, but one of the worst parts about this year is a lack of gossip. If you’re being responsible it means you’re not going anywhere, which means less stuff happens, which means there are fewer juicy stories.

But the NBA hotline is here to help. People can call anonymously to report players and staff who aren’t wearing masks, aren’t social distancing, or violating other protocols.

So….basically league-sanctioned snitching. The fact that this exists has been a source of many jokes, but I can’t wait for the big story involving the hotline. It hasn’t happened yet, but you know that there’s some drama just waiting to erupt in the bubble, and you know it’s going to involve some anonymous tipster. It’s basically the verbal equivalent of a Kevin Durant burner account on Twitter.

Luka Balks At NBA Award Talk
Luka Doncic isn't sold on being on the shortlist for the Most Improved Player award, and instead offered up another name.
2 hours ago

Draymond Green Pays The Price
The NBA fined the Golden State Warriors forward for his Devin Booker comments, but he seems unfazed.
4 hours ago

A Blazers-Clippers Brouhaha
Two missed free throws by Blazers superstar Damian Lillard led to a social media standoff for the ages on Saturday.
23 hours ago 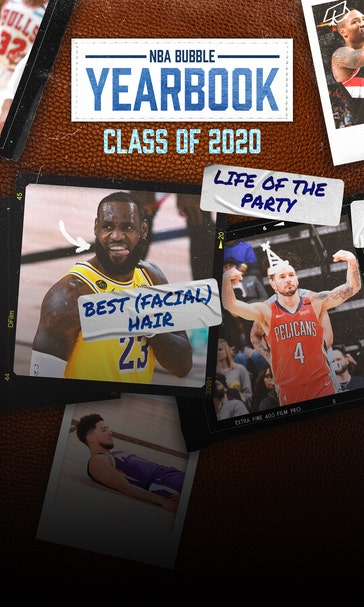 NBA Bubble Superlatives
With the NBA playoffs just 10 days away, Charlotte Wilder is handing out awards, yearbook-style.
1 day ago
those were the latest stories
Want to see more?
View All Stories
Fox Sports™ and © 2020 Fox Media LLC and Fox Sports Interactive Media, LLC. All rights reserved. Use of this website (including any and all parts and components) constitutes your acceptance of these Terms of Use and Updated Privacy Policy . Advertising Choices . Do Not Sell my Personal Info