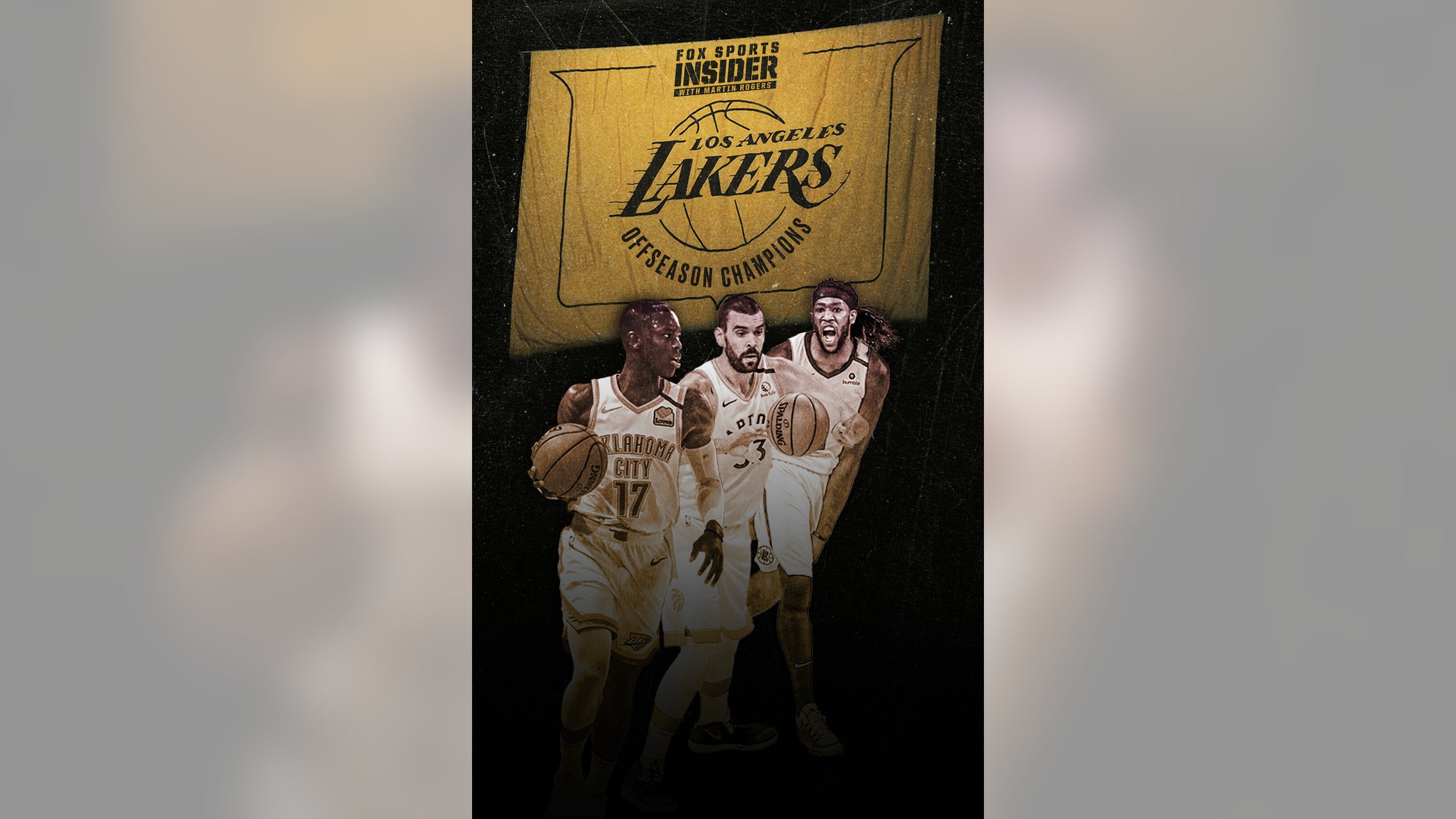 previous story
The One and Only
next story
Andy Katz's Preseason Tiers: Top 16
National Basketball Association

You can call it what you like: a mini-rebuild, a retooling, restocking, a Thanksgiving gift to LeBron James or, if you’re so minded, the week that ensured the Los Angeles Lakers will start the next NBA season with an iron grip on the role of championship favorites.

Regardless of what descriptor you settle upon, the reality is that the Lakers didn’t wait until Black Friday to get their hands on some of the juiciest bargains of the year. In doing so, the organization will enter the new campaign with a roster even stronger than the one that just lifted a title.

There was little in the way of splash or flash, no third megastar to join James and Anthony Davis, and no lavish spending. It was just L.A. being L.A., the Lakers being the Lakers, leveraging every part of what those things stand for to get elite help at exceptional prices.

Dennis Schroder, Montrezl Harrell, Wesley Matthews and Marc Gasol aren’t the kind of figureheads to take a franchise to glory under their own steam, but placed into a setup that already boasts two of the best five players in the league, they can provide a depth chart that looks utterly loaded.

Which, if you are one of the teams trying to knock the Lakers from their perch, is a major problem.

“The rule in the NBA is this,” FS1’s Nick Wright said on First Things First. “If you are going to beat a LeBron James team, you have to annihilate them when he goes to the bench. If LeBron’s team can just play you even in the 10 minutes or so that he sits, you cannot beat them. The Lakers are going to be fine when LeBron rests. The Lakers are not just the favorites, they are the favorites over the entire field.”

It is not actually that hard to get really good players to move to a new NBA franchise, they’ll just want exorbitant amounts of money to do so, which creates all kinds of other problems. Consider the Charlotte Hornets this week, feeling they were left with little choice but to pay the maximum to often-injured Gordon Hayward.

The Lakers have avoided that pitfall. This is an organization that has an inbuilt advantage at any time and a monumental one when it is in the middle of a period of success. Players across all major sports like to live in L.A. and will sometimes take less money for the privilege. Players in basketball cherish the opportunity to win a championship, and again, will often confer a discount to get it. And yes, it is probably kind of cool to tell people you play for the Lakers.

Schroder is a player able to make a real impact with his smarts, vision and movement. L.A. didn’t have to give up much to get him either, sending veteran Danny Green and the draft rights to Jaden McDaniels to the Oklahoma City Thunder.

Harrell was recruited for two years and $19 million, less than half of what it has been suggested his free agency haul would be, and less – according to the Los Angeles Times – than he was offered by the Hornets.

Even with Harrell’s drop-off in performance as the Clippers crashed out of the postseason, the 26-year-old looks like a steal at that price.

So too do Matthews at $3.6 million and Gasol, acquired for two years at $2.5 million, who will suit up where his brother Pau enjoyed success alongside Kobe Bryant a decade ago.

“Even before all these moves, I was saying they’ll be better,” FOX Sports NBA analyst Chris Broussard said. “Simply because Anthony Davis, with the confidence of winning a championship, is going to be much better this year.

“So, assuming LeBron doesn’t fall off by more than a fraction at age 36, they are going to be better. They already have the best duo in the league. Now they have improved their supporting cast and their depth. They’ve got two of the best sixth men in the league in Schroder and Harrell, and Gasol is a great defender.”

Just weeks removed from holding firm in the Orlando bubble and seeing off the Miami Heat in the NBA Finals, the Lakers have done the math and made things work. Kentavious Caldwell-Pope, often maligned in the past but highly effective during the most recent postseason, is coming back after hitting free agency. Markieff Morris signed a one-year veteran minimum deal.

When James moved to California in 2018, Kyle Kuzma was arguably the third best player in the locker room. Now he might be outside the top seven in terms of importance to the franchise, and he hasn’t gotten worse.

And yet while the Lakers keep trying to get better, there is an acceptance that they have to be.

“I think we as a group will play at an extremely high level,” head coach Frank Vogel told Spectrum. “But that target gets bigger now that we are the NBA champion. I’m sure every night we’re going to be seeing every team’s best punch. That alone will bring a lot of challenges and make it a more difficult season. But we’re all really excited about getting going.”

The games will follow again soon enough and the intrigue will come along with them. Yet the most interesting part of the offseason is now done – and the Lakers have already racked up a major victory.

Remembering Kobe: A Special Bond
Few were closer to Kobe Bryant than Brian Shaw, who looks back daily at their relationship – not in grief, but with joy.
1 hour ago

Sizing Up Zion
A healthy Zion Williamson has been a sight to behold. But his individual success hasn't always equaled wins in the Big Easy.
3 days ago
those were the latest stories
Want to see more?
View All Stories
Fox Sports™ and © 2021 Fox Media LLC and Fox Sports Interactive Media, LLC. All rights reserved. Use of this website (including any and all parts and components) constitutes your acceptance of these Terms of Use and Updated Privacy Policy. Advertising Choices. Do Not Sell my Personal Info