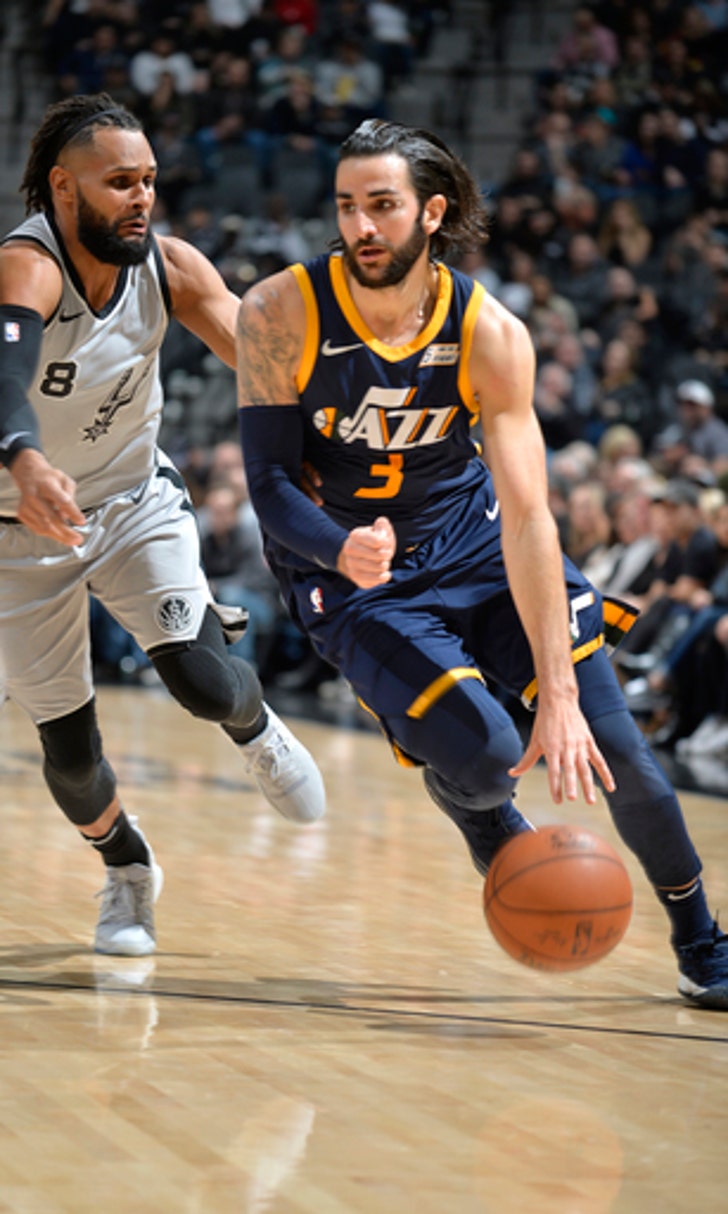 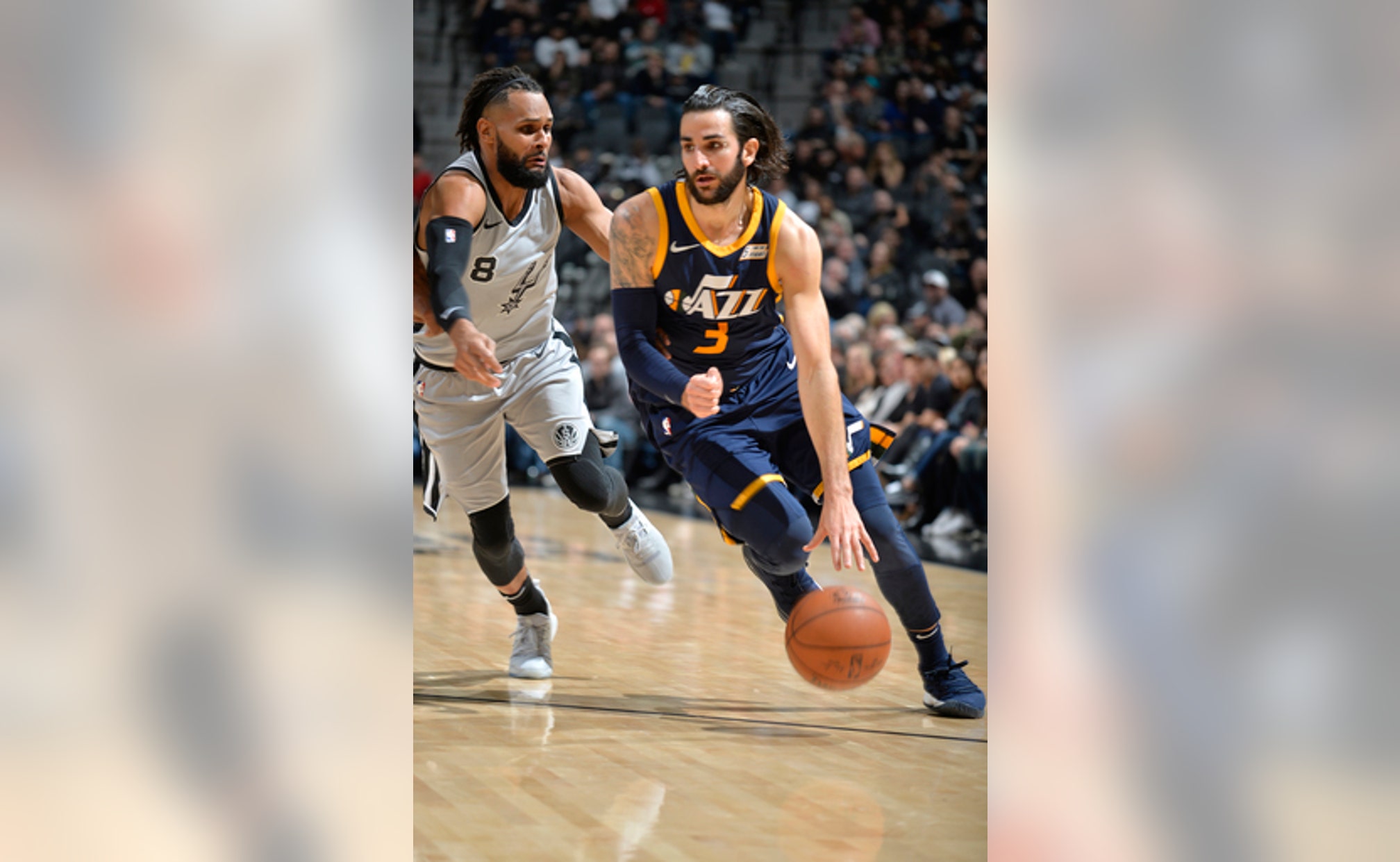 SAN ANTONIO (AP) After being run ragged by the Spurs' ball movement for years, Ricky Rubio continues to get some payback in his first season with Utah.

Rubio scored a season-high 34 points and added nine assists, and the Jazz upended San Antonio 120-111 on Saturday night for their fifth straight victory.

Utah shot 57 percent from the field and had 26 assists in its second win over San Antonio this season.

''We did the extra pass,'' Rubio said. ''We're trying to play like (the Spurs) actually. We were trying to move the ball and do the extra pass until one guy is open. Sometimes one guy open is not enough and we just take it to the next step where it's a wide open.''

LaMarcus Aldridge had 31 points for the Spurs in the final home game before embarking on their annual monthlong rodeo road trip. It was Aldridge's 10th game with 30 points this season after doing so just five times in his previous two seasons with the Spurs.

He was one of the few bright spots for San Antonio, which lost three times during the five-game homestand after losing just three home games prior.

Despite arriving in San Antonio late after playing Friday night in Phoenix, the Jazz rolled over the Spurs.

''They were inspired, we were poor,'' said Manu Ginobili, who had 13 points. ''Always late and they got everything they wanted. They got 3s, free throws, mid-range and layups. We were behind the whole game.''

The Jazz were without star rookie Donovan Mitchell, who missed the game due to an illness. Rubio made sure they had no trouble replacing the production of their leading scorer.

''He knew the situation tonight with Donovan out,'' Utah coach Quinn Snyder said. ''I thought he was efficient. He was taking really good shots and then the second half he started passing and finding other people. That's the sign of a guy that really understands the game.''

Utah was 5 for 8 on 3-pointers in the first quarter, including two from Rubio over second-year player Dejounte Murray.

''He's just being more aggressive,'' Jazz center Rudy Gobert said. ''He's attacking the rim and finding his teammates. We just got to be in the right spot. He's a very good passer. He's doing a great job with that.''

San Antonio struggled offensively in the first quarter as it did throughout the homestand.

''I can't figure it out,'' Aldridge said. ''We've just got to come out with the intensity that we have in the second half in the first half. We've just got to find ways to get ourselves going early.''

Jazz: Alec Burks made his first start of the season. He finished with eight points and eight rebounds in 25 minutes. . Rodney Hood played 16 minutes after being listed as probable with a bruised lower leg. ... G Joe Johnson sat the game out to rest. ... The Jazz beat the Spurs 100-89 in Salt Lake City on Dec. 21.

Spurs: Murray became the first player since Kawhi Leonard with 500 points and 300 rebounds in his first 100 games with the Spurs. ... Brandon Paul did not play after being downgraded from questionable with back spasms. ... The Spurs' next home game is Feb. 28 against New Orleans.

ON THE ROAD AGAIN

The Spurs hit the road again for their annual sojourn in February, but they enter it under unusual circumstances.

San Antonio has struggled for much of the season, battling injuries to key players like Leonard, Tony Parker and Rudy Gay and trying to adapt to rotation changes.

''It feels like we have played 10 games not 60 or whatever we played,'' Ginobili said. ''We've got a feeling that we're still building, trying to find our identity, trying to get players back, rotations and who's in and who's out. It's a very unusual situation. I don't remember being in anything like this in (his) 16 seasons, and the crazy thing is we're still third (in the West).''

The Jazz have the longest active winning streak in the NBA, which Gobert attributes to one thing.

Spurs: At Phoenix on Wednesday night.

Hollywood Headscratcher
Paul George's postseason play was shockingly uneven, creating question marks as to how he and his LA teammates move forward.
13 hours ago