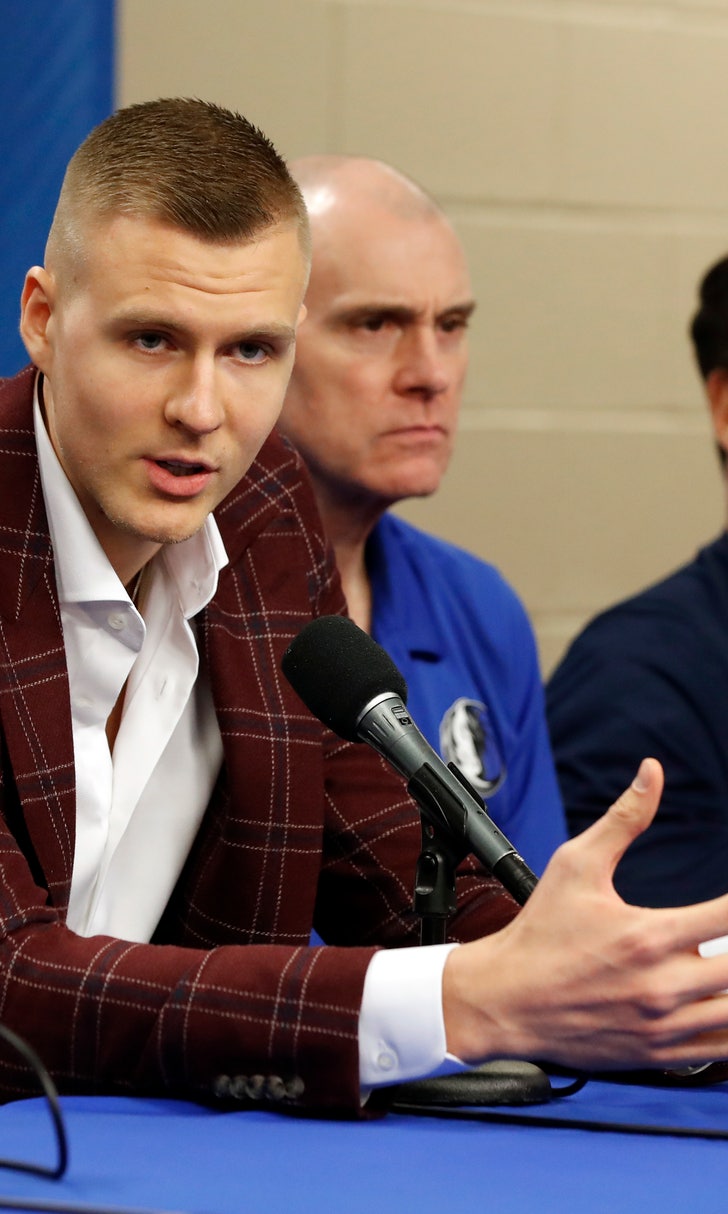 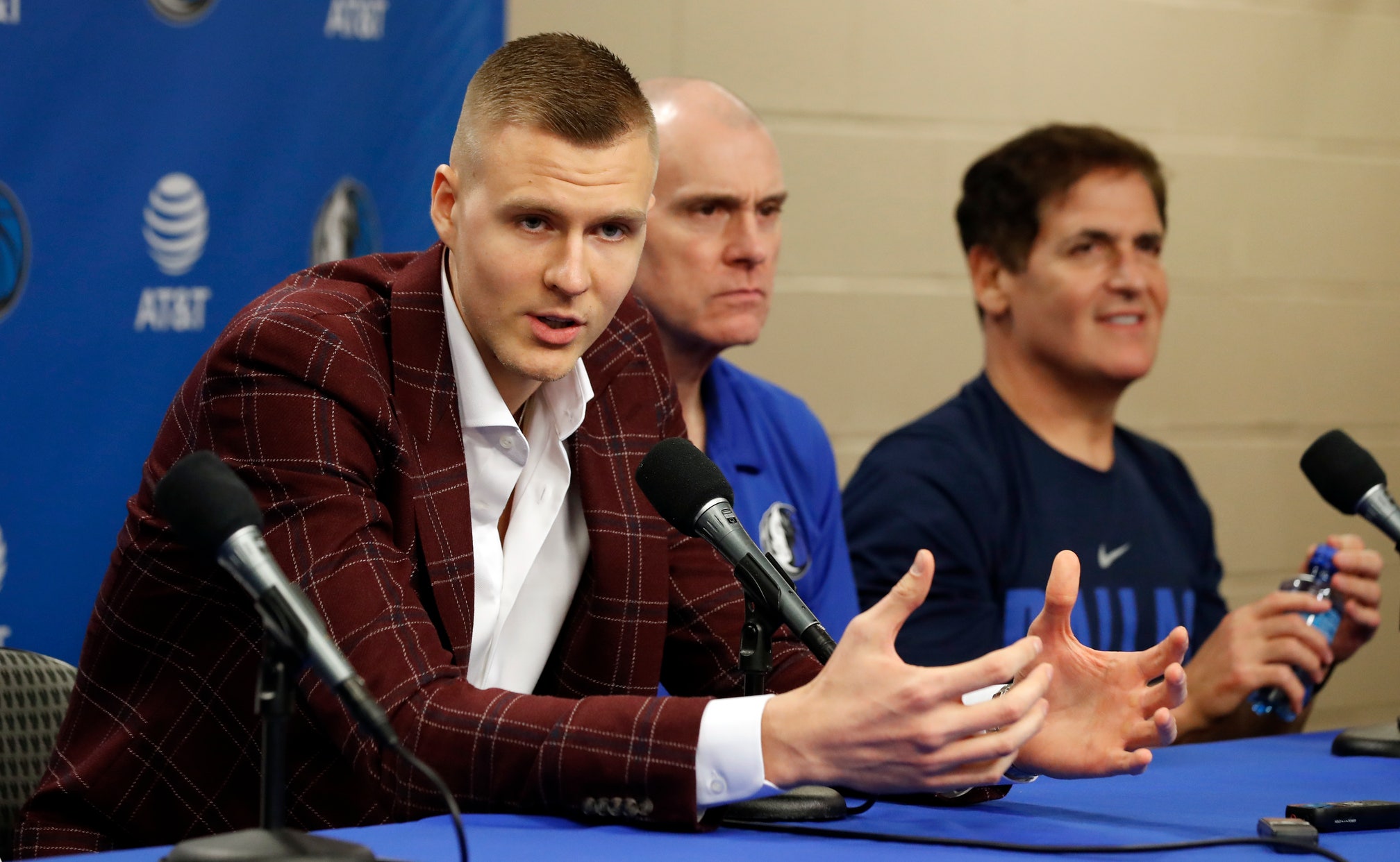 DALLAS (AP) — Kristaps Porzingis won't play for the Mavericks this season while continuing his recovery from a knee injury after Dallas acquired the 2018 All-Star in a blockbuster trade with the New York Knicks.

As for the next 20 years, Mavericks owner Mark Cuban said Monday he envisions Porzingis forming a Euro star pairing with 19-year-old rookie Luka Doncic even though the 7-foot-3 Latvian can become a restricted free agent after this season.

It was Cuban's way of saying he expects the 23-year-old Porzingis to sign a long-term contract, sooner than later. And for anyone questioning the math, Cuban likes to talk about medical advances extending careers of players into their mid-40s.

Cuban interrupted a question for Porzingis on whether the player once considered the cornerstone of the New York franchise planned to sign long term with Dallas.

Asked if that was true, Porzingis said, "Yes."

"Our goal is to keep them together for the next 20 years," Cuban said, interjecting himself again.

Porzingis said the plan all along was to sit out the season. He spoke two days shy of the one-year anniversary of tearing the anterior cruciate ligament in his left knee after a dunk against Milwaukee.

"There's no rush," Porzingis. "I've been patient this whole time, and I'm going to keep staying patient, which is one of the hardest things for me to do. We're going to make the right decision."

The Knicks made the seven-player deal last week on the same day they said Porzingis asked to be traded.

While Knicks President Steve Mills said Porzingis made it clear in their meeting last week that he wanted out, the fourth overall pick in 2015 said he preferred to discuss the future rather than dwell on the past.

Clearly, the future is all about Porzingis pairing with Doncic, the 6-7 Slovenian guard who swept the first three rookie of the month awards and is leading the Mavericks in scoring. Naturally, Porzingis was asked about the potential of the Euro duo several times.

"I get excited every time I think about it," said Porzingis, whose shares a pro background in Spain with Doncic. "I really see us being very special on the court and fun to watch."

Porzingis probably won't get to play with the European star he grew up watching: Dirk Nowitzki. The German has a secondary role in what is expected to be his final season. The 40-year-old Nowitzki set an NBA record by spending all 21 of his seasons with the same franchise.

Although Nowitzki hasn't said he's retiring and maintains that he will wait until the offseason to decide, several stops at hallowed NBA arenas have felt like farewells. That included Madison Square Garden — a day before the trade.

Porzingis had dinner with J.J. Barea after arriving in Dallas, and the Mavericks guard who is out for the season with a torn Achilles tendon said Porzingis had plenty of questions about the 2011 title run led by Nowitzki and sparked in the NBA Finals by Barea.

"Dirk is a guy I looked up to growing up," Porzingis said. "I hope we have a lot of time to spend together now that I'm in here in Dallas while he's still playing. I'll try to use every moment I have to bother him with some questions and some good stories that he has."

Assuming it is Nowitzki's final season, it won't be long before the focus turns entirely toward a pair of young Europeans who will try to bring a second championship to Dallas. The Mavericks haven't won a playoff series since winning their only title.

"I see two guys who are going to put their own signature on their positions," general manager Donnie Nelson said. "This is one of the most exciting times I think I've ever been a part of, having potentially two young players of their caliber for our fans to watch."

Coach Rick Carlisle's focus is on trying to get the Mavericks back to the playoffs, even though the trade could be viewed as a surrender on the current season, particularly with the decision to sit Porzingis with Dallas four games out of the final postseason spot in the Western Conference.

Even for Carlisle, it was hard to resist looking ahead.

"Next September seems like a long way away, but time is flying," Carlisle said. "In today's world of social media and things go a zillion miles an hour and we're going to blink and it's going to be media day in September 2019 and we'll be ready to go."

And Porzingis figures to be ready to play.