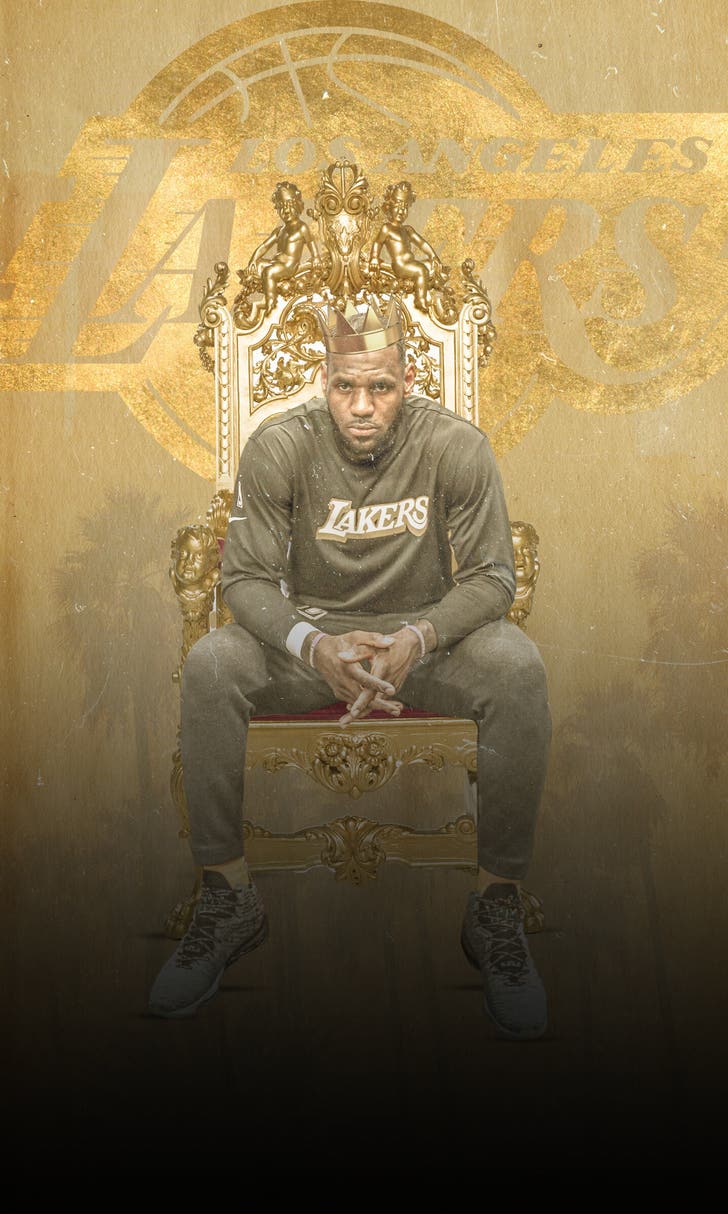 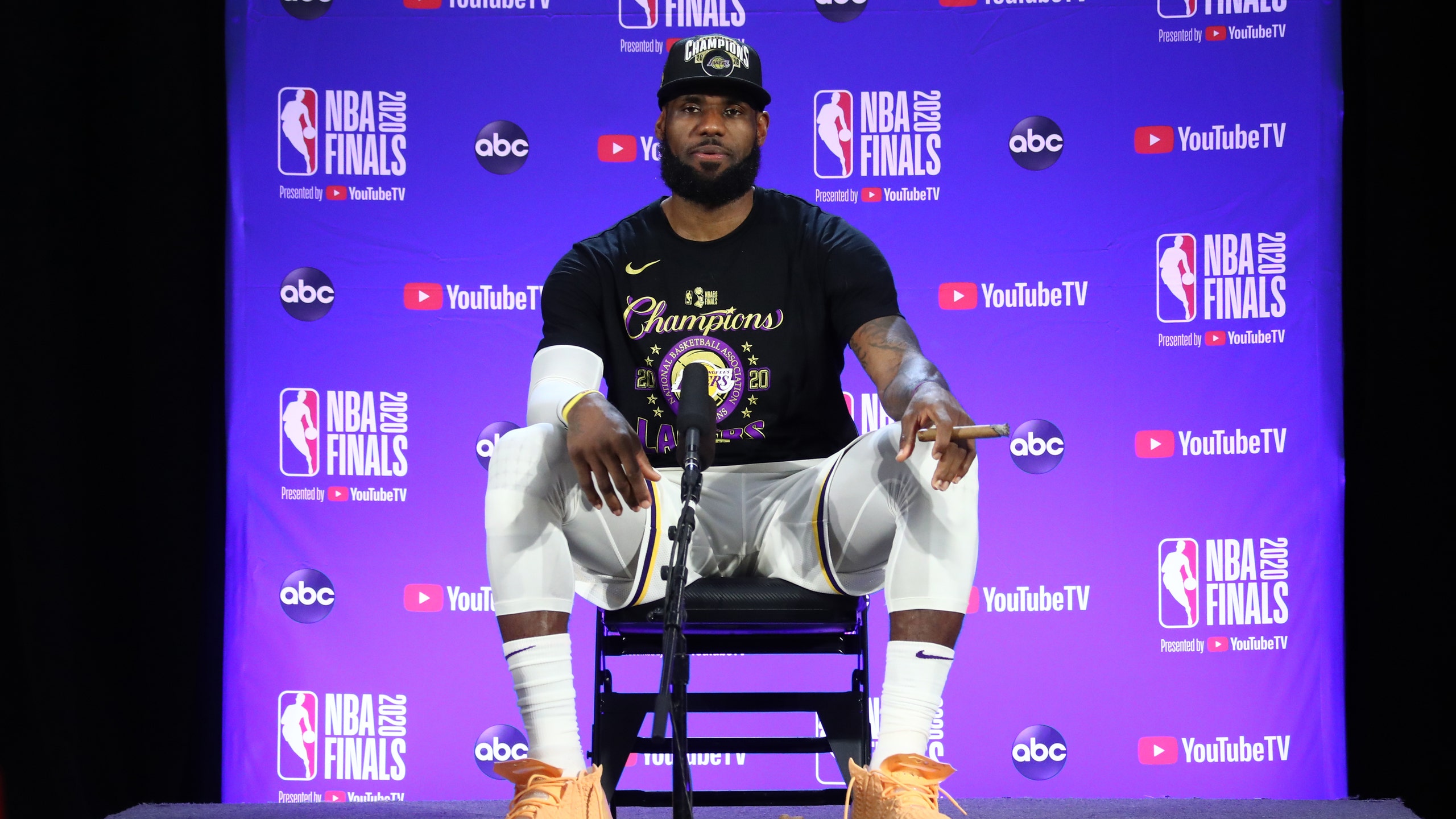 Weary Is The Head That Wears The Crown

When he found out the NBA season was going to start Dec. 22, a mere 71 days after he led the Los Angeles Lakers to their first championship in a decade, he let out an expletive.

"I was like, wow, and I said, ‘Oh, s---,' " James said Monday in his first official interview since winning his fourth title Oct. 11 against the Miami Heat.

In the video above, Colin Cowherd explains why the entire NBA is jealous of LeBron James and Anthony Davis.

James had just spent an incredibly challenging 94 days at Walt Disney World. Even under these extraordinary times, he thought he'd have a slightly longer offseason, at least one that was more than half of the usual 141 days after the NBA Finals.

"Just being completely honest, I wasn’t expecting that because early conversations were going on and I was hearing that there would be kind of a mid-January start and training camp would kind of start after Christmas," James said.

"We would have an opportunity to spend Christmas with our families. So, I had a break planned, a vacation with my family for us to go somewhere, which I haven’t been able to do, obviously, since I’ve been in the league. So, I had to switch up a lot of things once I heard the December 22nd start and with training camp starting, obviously, this week."

James, who turns 36 in a little more than three weeks and is entering his 18th season in the league, said he's doing as well as can be expected after Day 2 of training camp.

But apparently that's not unusual.

"And then mentally, I’m great. I’m healthy. My family is healthy. I’m great mentally, so I’m in a really good place in my life. I’m solid."

In the video above, Shannon Sharpe says he thinks there's a very good chance LeBron's Lakers become the NBA's next dynasty.

The Lakers, however, are well aware they're going to have to be especially careful with James at this stage of his career following the shortest offseason in professional sports history.

LA coach Frank Vogel said the team has to strike a balance between keeping James in rhythm and getting him adequate rest. It will be a collaborative effort, but Vogel would like to err on the side of caution.

"I made a joke with him last year that he basically should be retired from practice because of his tenure and his years and all that stuff," Vogel said Monday. "We’re always going to follow his lead with how he’s feeling."

Then in the playoffs, he averaged 27.6 points, 10.8 rebounds and 8.8 assists, leading the Lakers to their record-tying 17th championship.

But he was very transparent about how mentally and physically grueling the NBA Bubble was for him.

But James stuck it through, pouring his heart out in an attempt to prove to himself he could win a championship in the Western Conference and earn the respect of dubious Lakers fans.

Now, he's right back at it.

And the pressure is only amplified.

It's a challenge James embraces.

After all, last Wednesday he agreed to a two-year, $85 million contract extension with the Lakers that will take him through the 2022-2023 season.

What comes after that is a mystery.

"At the end of this contract, I'll be in year 20," he said. "The best thing about it is the year I'll be a free agent will be the same year my oldest son [Bronny] graduates high school. So I'll have some options to see, for me, personally, what I want to do forward, being around my family, being around my son more or continue to play this game I love with great health and great spirits. We'll see."

As of right now, James is focused on his present.

He said he's very happy about the Lakers' offseason moves, which included adding Montrezl Harrell, the reigning Sixth Man of the Year, Dennis Schroder, the runner-up for Sixth Man of the Year, Wesley Matthews, who has a wealth of playoff experience, and Marc Gasol, a three-time All-Star who won a championship with Toronto in 2019.

That mix should bring a new energy.

"You’ve got guys just hungry to make a mark on their career and do it at a high level," James said. "And we’ve got some guys that’s here that’s not satisfied with just winning one title. You add that all together, I think it’s going to be great for our ballclub."

The Lakers are in a unique position.

And James knows they have a chance to do something special.

So even though his body is aching, James is appreciating every second of it.

He knows not many players get this opportunity.

"I've been blessed to be a part of 18 straight training camps," he said. "And I'll never take that for granted."

The James Harden Experiment Is Working
James Harden appears to be both happy and motivated since his move to Brooklyn, and that’s scary for the rest of the NBA.
9 hours ago

'Club Shay Shay' Welcomes Rick Ross
"The Boss" Rick Ross stopped by "Club Shay Shay" to talk about the Miami Heat, his resemblance to James Harden and more.
11 hours ago

No Easy Explanation
Kyrie Irving is fighting an internal battle that has intrigued, inspired and infuriated NBA fans, Melissa Rohlin writes.
13 hours ago

The NBA's Most Devastating Injury
In recent years, Achilles tears have plagued some of the NBA's top players. Melissa Rohlin examines a painful trend.
23 hours ago