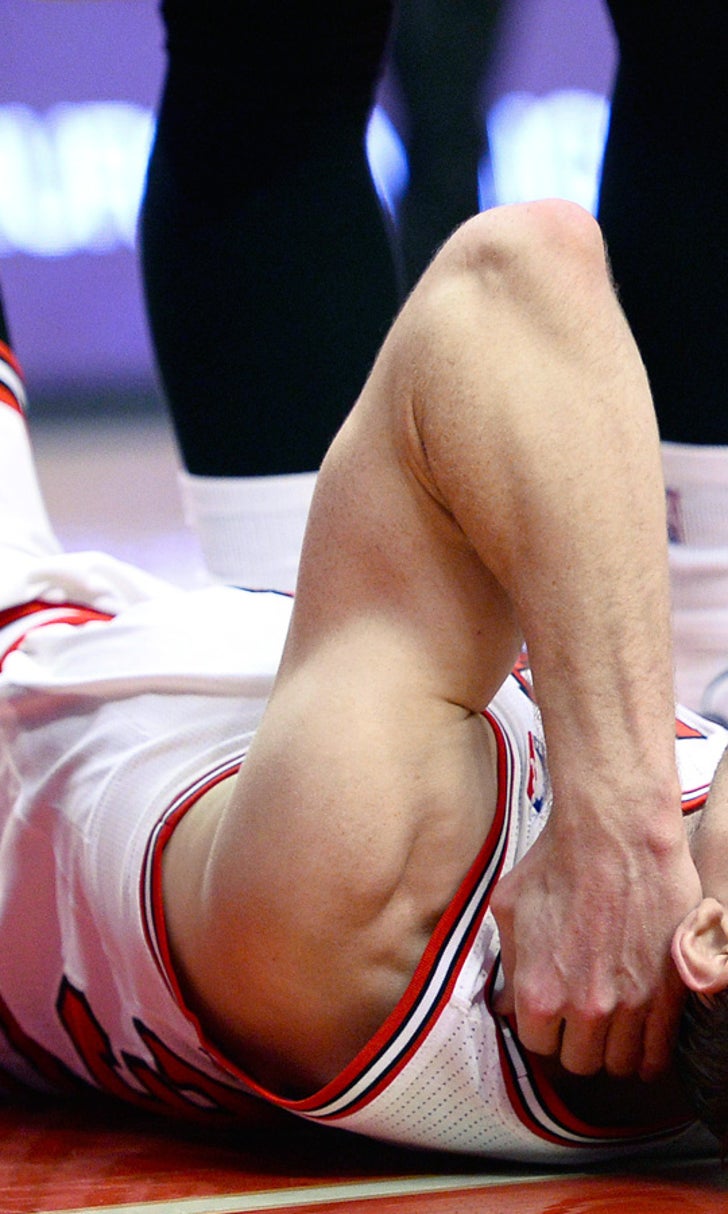 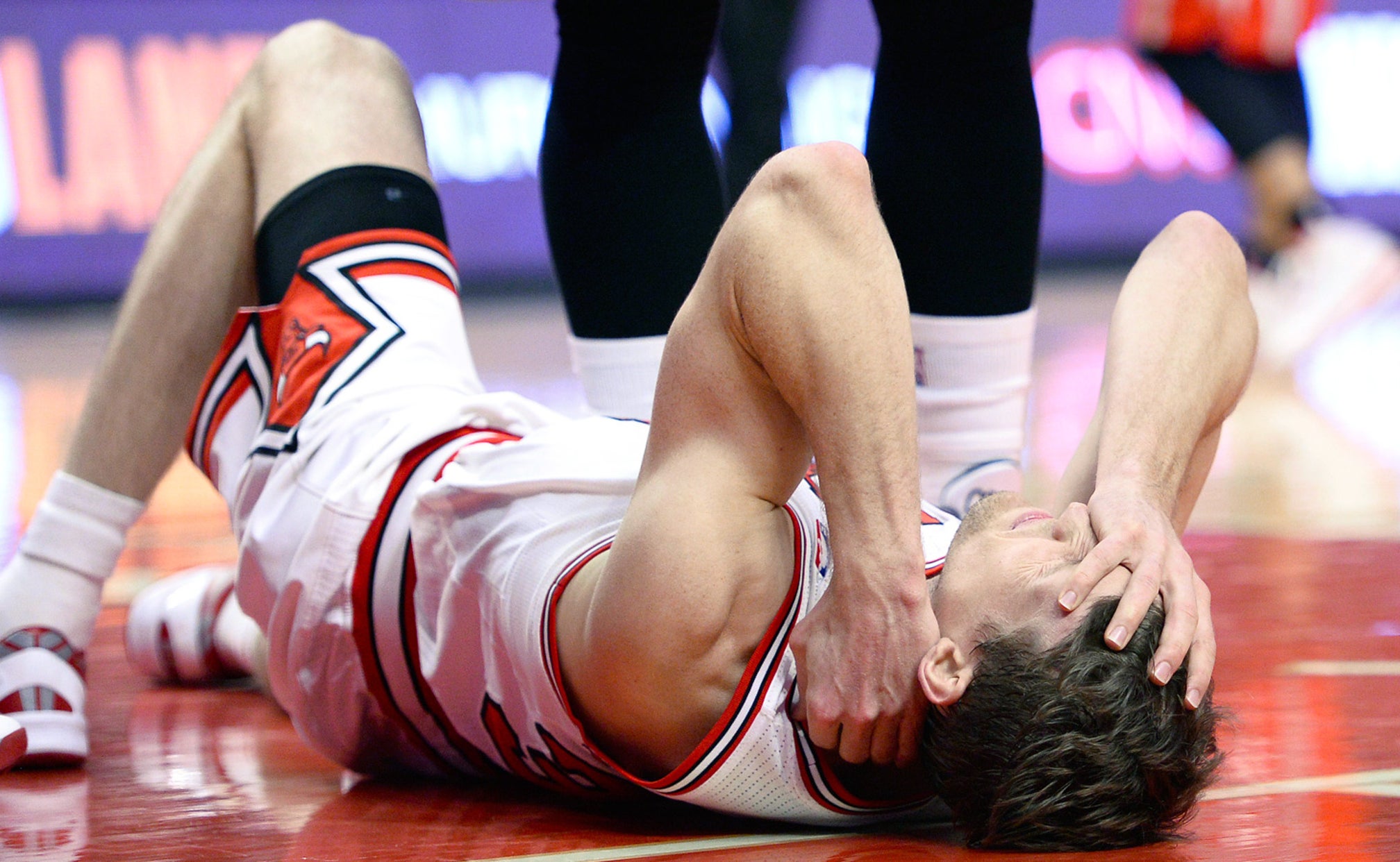 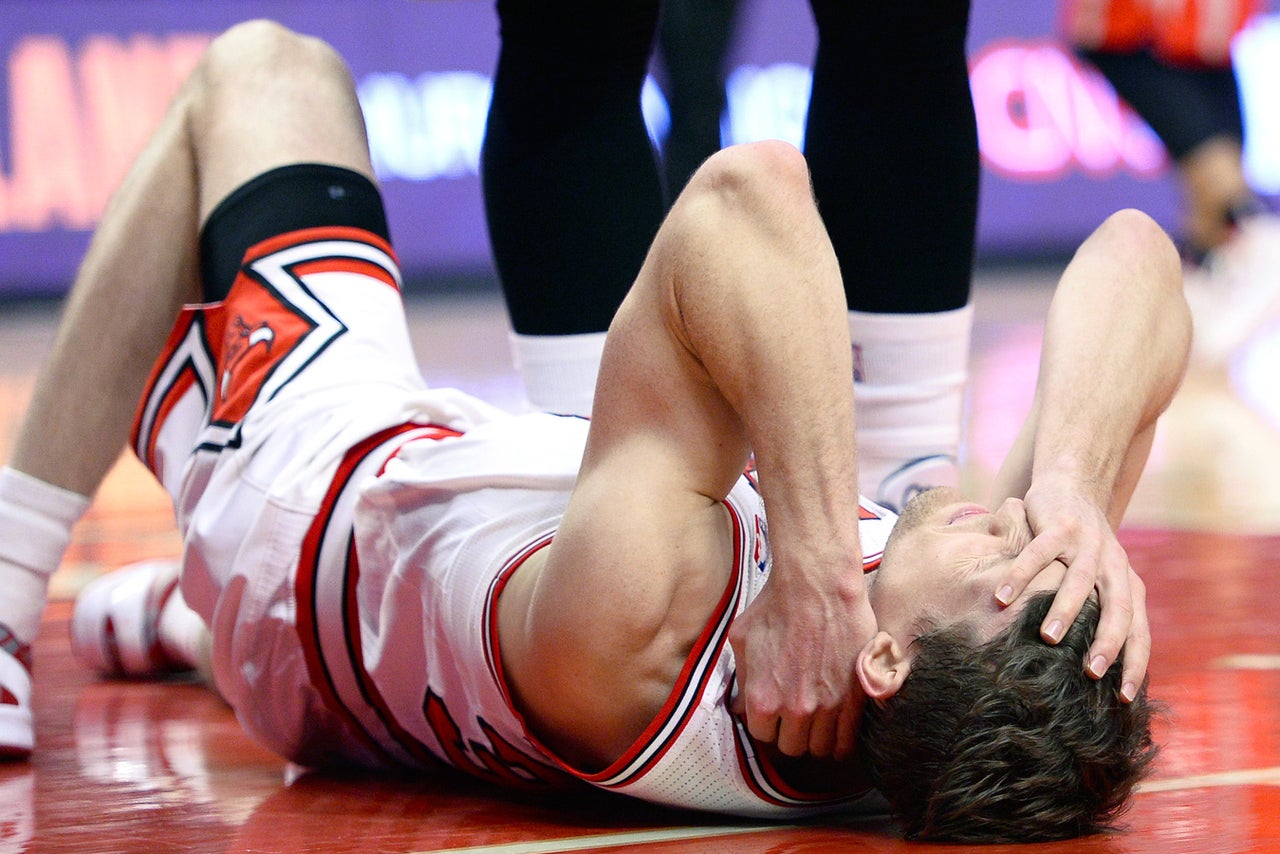 Mike Dunleavy caught an elbow just above the right eye while drawing a charge early in the second quarter Thursday night and left a trail of blood on the court as he ran into the Bulls' locker room.

Though the team said Dunleavy's return was questionable, there was never any doubt in his mind.

After getting 10 stitches to close the gash, Dunleavy returned in the second half to score all of his 21 points to help the Bulls pull away for a 111-87 wire-to-wire victory over the Houston Rockets.

"I just knew once they got the stitches done I was coming back," he said. "It was a pretty tough hit. My neck is sore -- there's some whiplash-type stuff -- and we're a little concerned about that, but overall, obviously, I felt pretty good in the second half.

"The hit knocked a little sense into me, I guess."

Center Joakim Noah flirted with a triple-double, finishing with 13 points, 10 rebounds and nine assists in 34 minutes. He was headed for his fourth triple-double of the season, but sat down with about three minutes left because of the lopsided score.

It was a team effort, but Dunleavy's play was the focus in the Bulls' locker room.

"I think it inspired the team," Noah said. "He had a huge knot on his head looking like (Evander) Holyfield, the white version, coming out there putting on a new jersey, gutting it out in the second half shows, it was good for Duke's street credibility.

"It was very impressive. It shows a lot about the character of this team. ... I've never seen nothing like that, to get rocked like he got rocked."

The Bulls improved to 2-2 on their six-game home stand.

The Rockets have dropped two straight. Reserve guard Jeremy Lin led Houston with 21 points, while Dwight Howard had 12 points and 10 rebounds in 28 minutes. James Harden had eight points on 2-for-7 shooting in 27 minutes.

The Bulls were coming off a humiliating loss to San Antonio on Tuesday. Although they lost by just eight points, 104-96, the game was essentially over after they fell behind by 32 points in the first half. Bulls coach Tom Thibodeau said his team simply wasn't ready to play following an emotional win against the Miami Heat two days earlier.

"If we don't play with great intensity, we're in trouble," Thibodeau said before playing the Rockets. "Two or three minutes when you don't have that edge, that's 15 or 20 points."

That wasn't a problem Thursday -- at least for the Bulls.

"We did not come out ready to play," Rockets coach Kevin McHale said. "I have no idea why. You have to ask them. We did not offensively or defensively start the game. We were walking it up, not running."

The Bulls led 50-42 at the half and any thoughts of a Houston comeback were quickly dismissed at the start of the third quarter when the Bulls scored 16 straight points for a 66-42 edge. The final 12 points of the run came on four straight 3-pointers by Dunleavy and Hinrich. They each had two, alternating after Hinrich started the streak.

Later in the quarter, the Bulls stretched the lead to 77-48 on a 3-pointer by Augustin. They led 85-58 entering the fourth quarter.

Dunleavy finished the period with 18 points on 7-for-11 shooting. He was 3-for-4 on 3-pointers and the Bulls were 6 for 8 from behind the line in the quarter.

The Bulls were able to open up the big lead because of the hot shooting, but Noah's defense on Howard was also key. Noah's ability to contain the Rockets' big man straight up hampered the Rockets' offense.

It was a far cry from early in his career when Noah usually was overpowered by Howard.

NOTES: The Rockets won 109-94 in the teams' previous meeting on Dec. 18. Houston had 66 points in the paint in that game, the most the Bulls have allowed this season. ... McHale, despite having Dwight Howard on his team, said before the game that Noah should be the league's defensive player of the year. "Especially after the (Loul) Deng trade, Noah's played with such high intensity," McHale said. "They've been winning a lot of games just on his grit and toughness.". Before Thursday, the Rockets were 13-3 since Feb. 1 and had won four straight against the Bulls. Rockets were averaging 106.5 points before Thursday.

Don’t Write Off The Denver Nuggets

Don’t Write Off The Denver Nuggets
Down 2-0, the Nuggets got a huge Game 3 win over the Lakers. No one should be taking this team lightly, Martin Rogers writes.
1 hour ago

Lethargic In Los Angeles
The Lakers looked sluggish in their Game 3 loss to Denver. Will it wind up costing LeBron & Co. in the long run?
6 hours ago

A Shift In Momentum?
Boston welcomed the return of Gordon Hayward in Game 3, with hopes it will translate into a comeback series win over Miami.
9 hours ago

Nuggets Hold On To Win Game 3
Denver has become known for staging epic comebacks, but it needed to stave off one to claw back into the West Finals.
18 hours ago
those were the latest stories
Want to see more?
View All Stories
Fox Sports™ and © 2020 Fox Media LLC and Fox Sports Interactive Media, LLC. All rights reserved. Use of this website (including any and all parts and components) constitutes your acceptance of these Terms of Use and Updated Privacy Policy. Advertising Choices. Do Not Sell my Personal Info