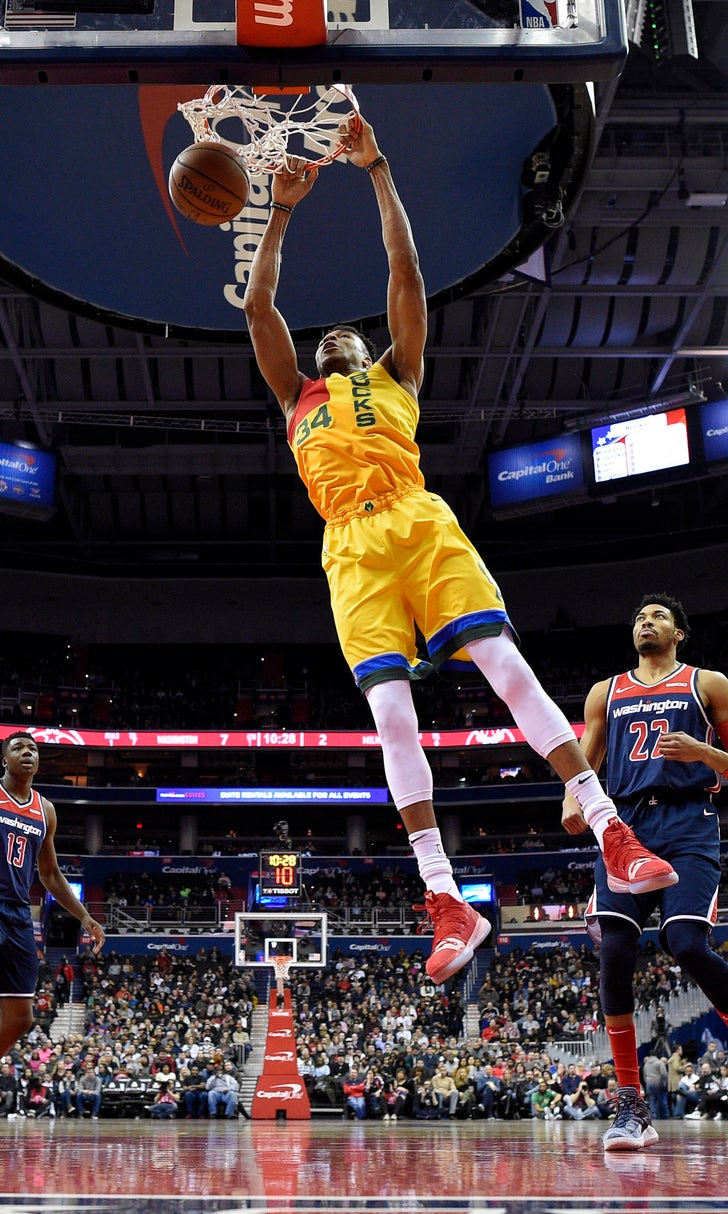 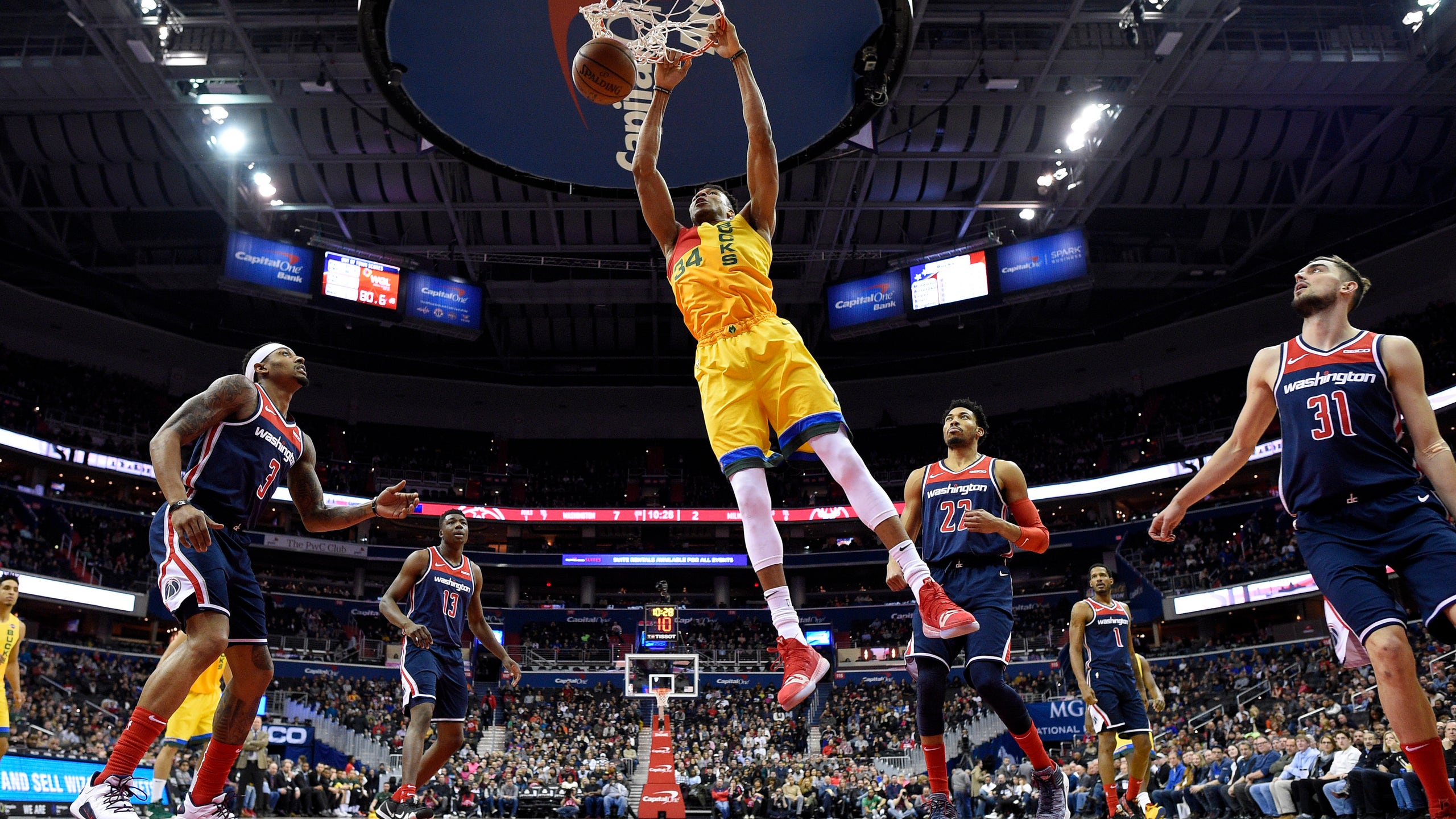 OAKLAND, Calif. (AP) — Klay Thompson returned from a one-game absence with an illness to score 28 points and light up the Lakers for the second time in 13 days, leading the Golden State Warriors to a 115-101 victory Saturday night over a Los Angeles team again missing LeBron James.

Splash Brother Stephen Curry missed his first eight shots before a layup with 6:20 remaining and still wound up with 14 points, two days after going off for 41 in a loss to the 76ers when he hit 10 3-pointers. Andre Iguodala hit a go-ahead 3 in the final minute of the third, and two more early in the fourth as Golden State pulled away and finished with 17 points. DeMarcus Cousins had 18 points and 10 rebounds in his second home game and seventh in all since coming back from a nearly yearlong recovery from surgery for a ruptured left Achilles tendon. Kevin Durant added 21 points and 11 of the Warriors' 31 assists.

The Lakers hung tough without James just as they did here in a 127-101 victory Christmas night. They lost James in the third quarter of that game to a strained left groin. He returned from a 17-game absence Thursday night against the Clippers only to sit again Saturday.

James' rest was for what coach Luke Walton called "load management." The four-time MVP had been set for his second game back but woke up Friday "very sore" after playing 40 minutes in the 123-120 overtime win against the Clippers. He finished with 24 points, 14 rebounds and nine assists.

SAN ANTONIO (AP) — LaMarcus Aldridge had 25 points and 14 rebounds and San Antonio withstood another bat intrusion — with a nifty play from the team's coyote mascot — and held off the depleted New Orleans.

The bat began hovering above the court three minutes into the game, causing officials to delay play. It was the second straight home game delayed by the winged intruders, with three bats buzzing the court Thursday night against Brooklyn.

An arena official walked onto the court with a net, but missed the bat on his first attempt. Almost on cue, the mascot charged onto the court dressed in a Batman costume with a net. He missed his first swipe at the bat, then dove near the scorer's table and caught the bat in his net to huge cheers from Spurs players and fans. The worker placed the bat into a towel and took him from the court, with play resuming after a delay of only 1 1/2 minutes.

Frank Jackson had a career-high 25 points to lead New Orleans.

SALT LAKE CITY (AP) — James Harden had 43 points for his 26th straight game with at least 30 points in Houston's victory over Utah.

Harden's 30-point streak is the third-longest in NBA history, trailing only Wilt Chamberlain's runs of 65 and 31 games. Harden also had 12 rebounds, six steals, five assists and four blocks. He was 12 of 22 from the field, making 4 of 12 3-pointers, and made all 15 of his free throws.

Gerald Green added 25 points, and Kenneth Faried had 16 points and 12 rebounds before fouling out with 5:07 remaining. Houston snapped a two-game losing streak, holding the Jazz to 36 percent shooting and forcing 23 turnovers. Donovan Mitchell had 26 points and nine assists for Utah.

WASHINGTON (AP) — Giannis Antetokounmpo scored 37 points, making all of his season-high 17 free throws in a perfect night at the line for Milwaukee, and had 10 rebounds to help the NBA-leading Bucks rout Washington.

Two games ahead of Toronto for the Eastern Conference lead, the Bucks have won three straight, nine of 10 and 20 of 24.

The Bucks were 24 of 24 from the free-throw line. They had a 17-2 run late in the second quarter, led by 23 at halftime and 32 early in third quarter. Antetokounmpo scored seven of the last 10 points in big second-quarter run, including a thunderous slam over Jeff Green that led to a three-point play.

MINNEAPOLIS (AP) — Nikola Jokic had his 25th career triple-double with 13 points, 16 rebounds and 10 assists, including a late full-court pass that set up a key basket to help Denver beat Minnesota.

The Nuggets won their sixth straight game, and added another accolade by ensuring that coach Mike Malone will head to the All-Star game with Jokic by virtue of their NBA franchise-best 37-15 start.

Karl-Anthony Towns had 31 points, 12 rebounds and seven assists for Minnesota.

CLEVELAND (AP) — Rookie Luka Doncic matched his season high with 35 points and did a little bit of everything for Dallas, and Harrison Barnes scored 13 points in the fourth quarter to lead the undermanned Mavericks past Cleveland.

With a contingent of fans waving Slovenian flags to support Doncic, the 19-year-old showed why the Mavericks are so excited about their future. He added 11 rebounds, six assists and made a couple long 3-pointers that drew gasps from the Quicken Loans crowd.

Barnes finished with 17 points. The Mavericks played their second game since acquiring star Kristaps Porzingis from New York in a blockbuster trade. Tim Hardaway Jr., Courtney Lee and Trey Burke also came in the deal, but are not eligible to play until their physicals are completed.

DETROIT (AP) — Lou Williams scored 16 Los Angeles points in a row during a torrid fourth-quarter stretch, and the Clippers overcame a 25-point deficit to beat Detroit.

The Clippers trailed by 25 in the second quarter and were down 83-60 in the third before storming back to tie it 89 in the fourth. It was 91-all before Williams scored every Los Angeles point during a decisive run that put the Clippers up 107-96.

Williams finished with 39 points. Detroit's Blake Griffin had 24 points and 11 rebounds against his former team, and Reggie Jackson added 29 points for the Pistons.

Joel Embiid had 29 points and 17 rebounds for Philadelphia. Butler added 29 points, 18 coming in the fourth quarter when he made two four-point plays.

Indiana ended a season-long four-game losing streak, which started in the game immediately following the one where All-Star Victor Oladipo left with a season-ending knee injury.

CHARLOTTE, N.C. (AP) — Kemba Walker had 15 of his 37 points in the fourth quarter and the Charlotte Hornets pulled away to beat Chicago for its fifth straight victory.

Walker had 10 assists and finished 5 of 6 from the field in the fourth quarter, sparking an 18-4 run to hand the Bulls their fifth loss in six games.

Bobby Portis led Chicago with 33 points, and Lauri Markkanen had 30.

PHOENIX (AP) — John Collins matched his career high with 35 points and fell one shy of his career best with 16 rebounds, and Atlanta handed Phoenix its 10th straight loss.

Trae Young scored 17 of his 27 points in the fourth quarter.

D'Angelo Russell had 23 points for Brooklyn, and Shabazz Napier added 15.

The James Harden Experiment Is Working
James Harden appears to be both happy and motivated since his move to Brooklyn, and that’s scary for the rest of the NBA.
2 days ago

'Club Shay Shay' Welcomes Rick Ross
"The Boss" Rick Ross stopped by "Club Shay Shay" to talk about the Miami Heat, his resemblance to James Harden and more.
2 days ago

No Easy Explanation
Kyrie Irving is fighting an internal battle that has intrigued, inspired and infuriated NBA fans, Melissa Rohlin writes.
2 days ago

Brooklyn Buckets
So far, so good in Brooklyn. The Nets are 2-0 since pairing "The Beard" with KD, and the duo has so far proven unstoppable.
3 days ago
those were the latest stories
Want to see more?
View All Stories
Fox Sports™ and © 2021 Fox Media LLC and Fox Sports Interactive Media, LLC. All rights reserved. Use of this website (including any and all parts and components) constitutes your acceptance of these Terms of Use and Updated Privacy Policy. Advertising Choices. Do Not Sell my Personal Info