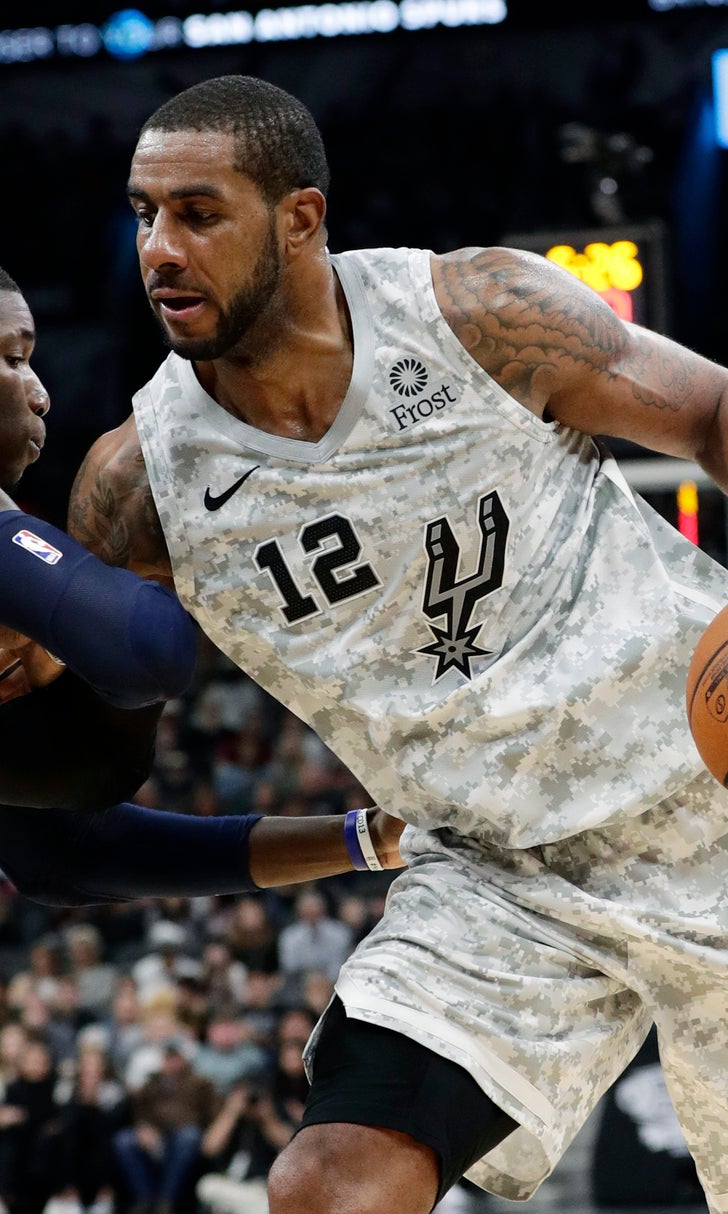 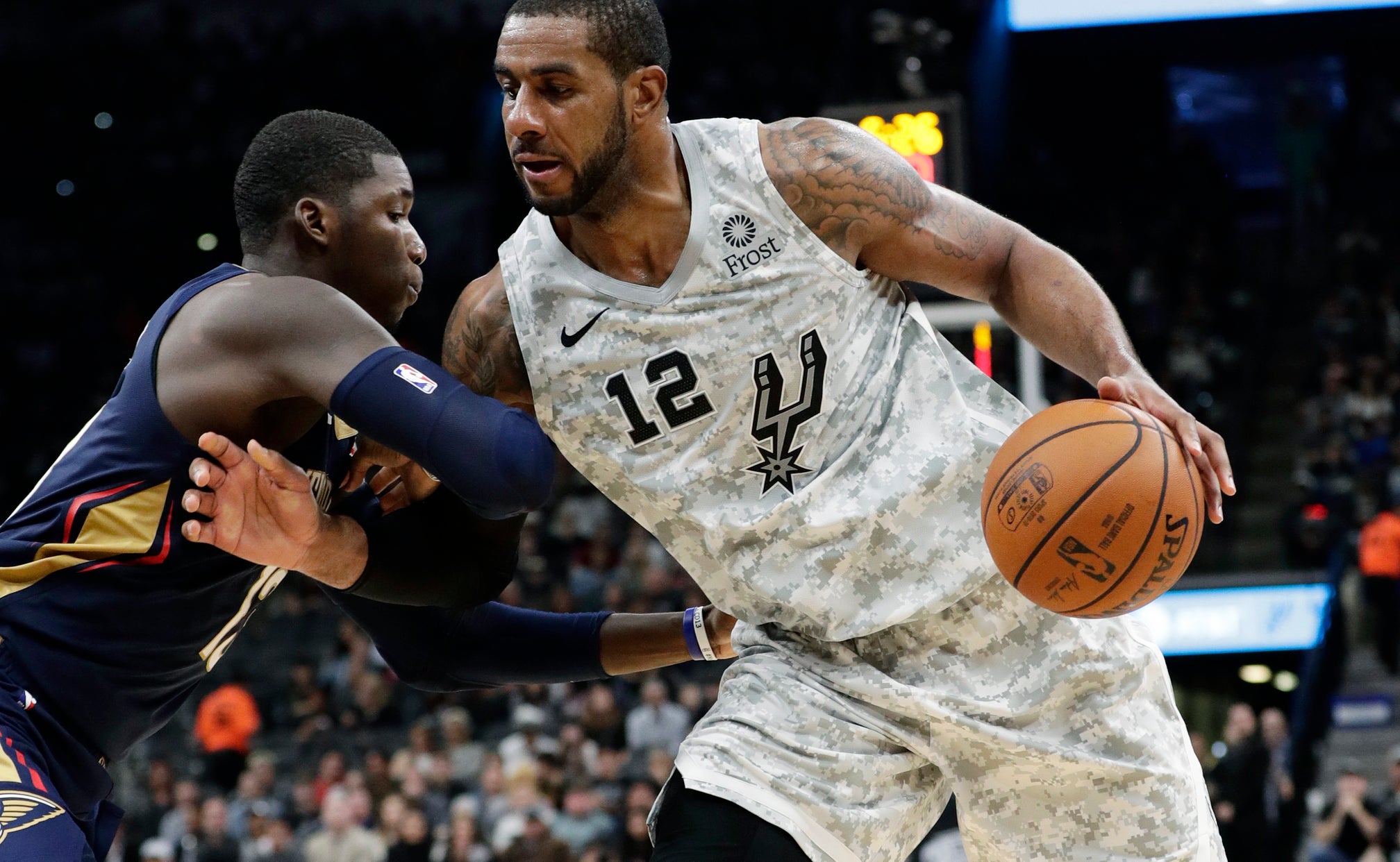 SAN ANTONIO (AP) — The San Antonio Spurs were hit by a couple of surprise attacks. They overcame both.

LaMarcus Aldridge had 25 points and 14 rebounds and the Spurs withstood another bat intrusion — with a nifty play from the team's coyote mascot — and held off the depleted New Orleans Pelicans 113-108 on Saturday night.

"The hardest teams to play against in this league is the guys that want to be out there and play that don't get the opportunity to play that much," said San Antonio's DeMar DeRozan, who had 13 points, six rebounds and five assists. "Because they're going to bring a whole type of intensity and type of play that you're probably not used to. A lot of things come unexpected and they really have nothing to lose."

The Spurs led for all but the opening basket in successfully sweeping a four-game homestand, but their fifth straight victory didn't come with some drama.

A bat began hovering above the court three minutes into the game, causing officials to delay play. It was the second straight home game delayed by the winged intruders, with three bats buzzing the court Thursday night against Brooklyn. Arena workers were able to shoo the bats into the rafters against the Nets, but the Spurs were better prepared against the Pelicans.

An arena official walked onto the court with a net, but missed the bat on his first attempt. Almost on cue, the Spurs' mascot charged onto the court dressed in a Batman costume with a net. He missed his first diving swipe at the bat, then dove again near the scorer's table and caught the bat in his net to huge cheers from Spurs players and fans. The worker placed the bat into a towel and took him from the court, with play resuming after a delay of only 1 1/2 minutes.

"I threw to hit it with the ball," Aldridge said. "I tried to, but I wasn't the hero tonight."

Anthony Davis was among five injured players out for New Orleans. Davis, who is listed out with a sprained left index finger, has not played since informing the Pelicans he wants to be traded from the franchise that drafted him first overall out of Kentucky in 2012.

"We never give up," Pelicans point guard Jrue Holiday said. "I feel like people think because we're short-handed or whatever may be, that we're going to get blown out but we haven't had many blowouts this year. That's because we're always going to fight until there's zero on the clock, no matter who's playing."

Frank Jackson had a career-high 25 points to lead New Orleans.

The Spurs emptied their bench while holding a 106-84 lead but were forced to put their starters back in after the Pelicans went on a 24-5 run. Jackson's layup pulled New Orleans to 111-108 with 38 seconds remaining.

"I won't say I wasn't nervous doing it," Popovich said of keeping the reserves in. "I just decided to stick with them and let them sink or swim for a while but when it got to three obviously, I had to do something different."

After DeRozan missed a floater, New Orleans' Tim Frazier upfaked and spun around Rudy Gay, but his 3-pointer circled the rim and fell off with 4.4 seconds left. DeRozan closed the game out with a pair of free throws.

The San Antonio Spurs honored media relations official Pete Anton, who is the oldest person employed by any NBA team, prior to the game. Anton, who is 98, has been with the Spurs since the franchise relocated to San Antonio from Dallas.

The Spurs gave Anton a framed jersey with his name on it.

"Petey, he's like a father, a grandfather, a great grandfather, a brother, an uncle, he's got all that, all rolled into one," Popovich said. "He's just the sweetest man. When you're around him, you know that he's a better guy than you. He's just one of those kinds of people. We all know a couple of people like that, and he's one of them. Obviously, he's been around here longer than anybody else. It's just fun to see that kind of continuity. He's always got a smile, no matter who it is, no matter what the situation."

Spurs: At Sacramento on Monday night.

Onward in H-Town
The Harden era has ended. But with Victor Oladipo joining John Wall and DeMarcus Cousins, redemption is possible in Houston.
3 days ago