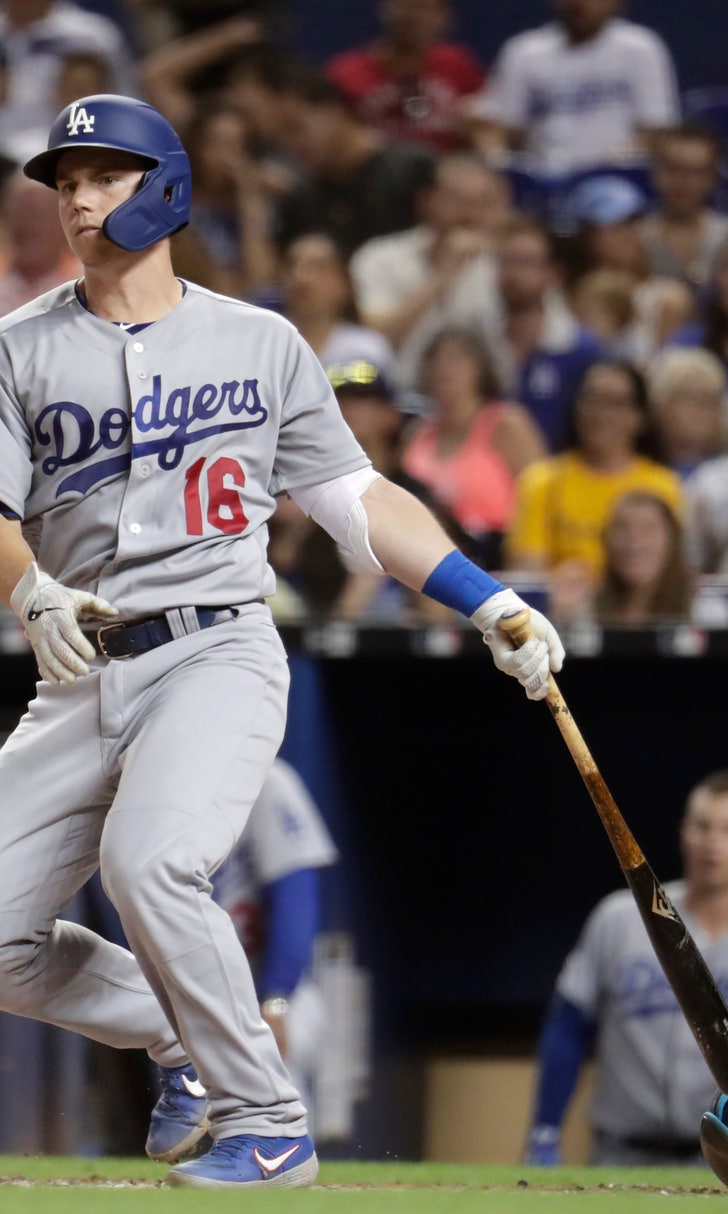 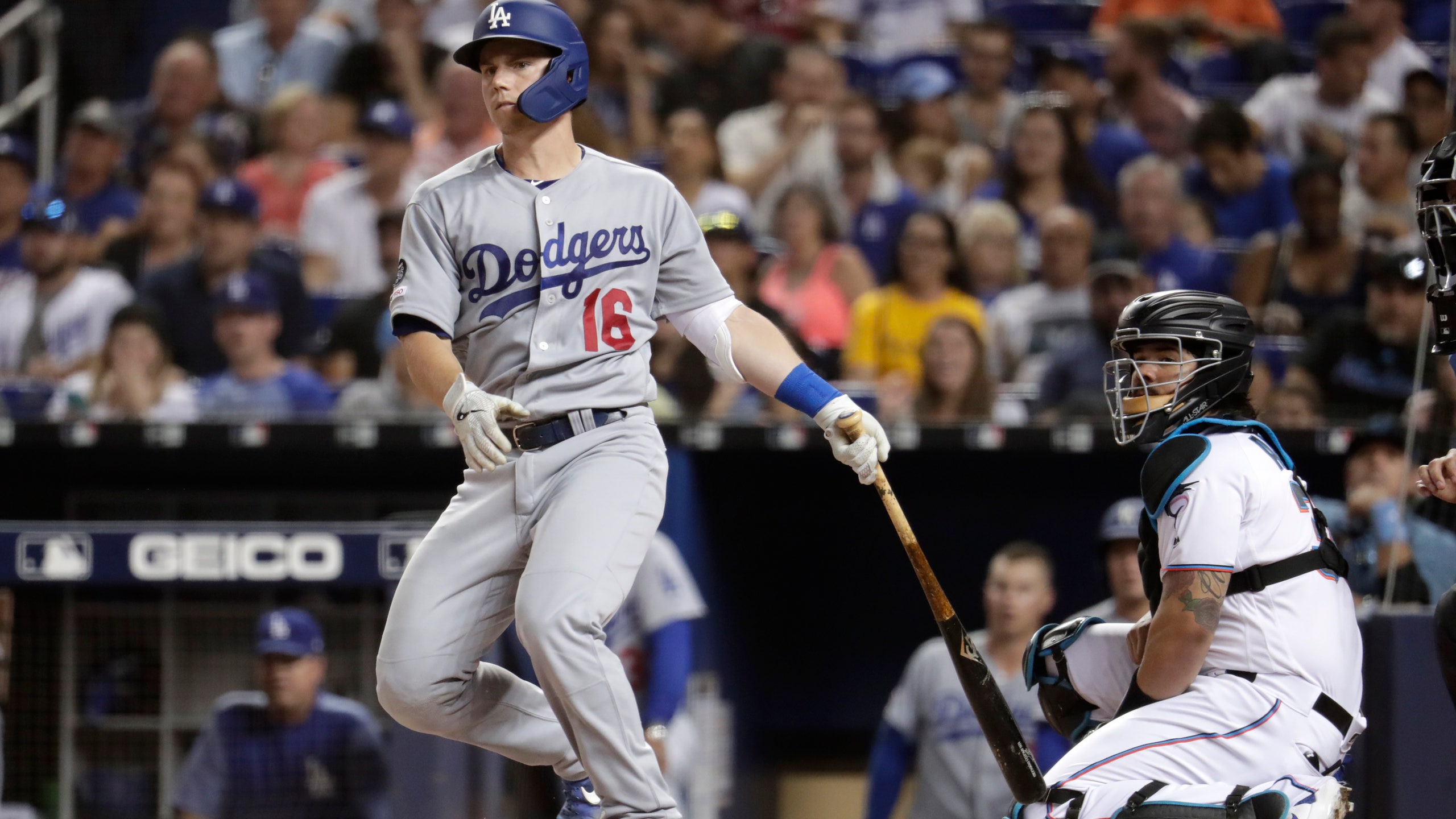 MIAMI (AP) — Even by the Dodgers' high-scoring standards, Tuesday night was extraordinary.

Rookie Will Smith achieved another milestone in the storybook start to his big league career with his first two-homer game, and Los Angeles twice hit back-to-back homers to pound the Miami Marlins 15-1.

Cody Bellinger tied a career high with his 39th home run and Justin Turner hit his 20th for the Dodgers, who totaled six homers and a season-high 13 extra-base hits — but no singles until there were two out in the ninth.

The six homers tied the record for most by a team at pitcher-friendly Marlins Park, which opened in 2012.

"It was as good a night as we've had all year, and that's saying a lot," manager Dave Roberts said. "Just a relentless approach."

Rookie Dustin May (1-1), making his third career start, earned his first win by allowing one run in 5 2/3 innings. Four relievers, including backup catcher Russell Martin, pitched the final 3 1/3 innings to complete a four-hitter.

The Dodgers increased their season run differential to plus-206, best in the majors. Los Angeles has won all four games this year against the last-place Marlins while outscoring them 36-8.

"Everyone wants to be great on this team," Bellinger said. "That's what we're showing."

The Dodgers, battling the Yankees for the best record in the majors, won for the 11th time in their past 13 games.

Corey Seager and Smith went back-to-back in the fourth inning. Smith added a two-run homer in the sixth to make it 6-1, and Turner and Bellinger hit consecutive homers in the seventh — the 13th time Los Angeles has gone back to back this year.

Smith, a catalyst in the Dodgers' recent surge, already had two game-ending homers and a grand slam. In 23 games he has nine homers, 26 RBIs and a .324 average.

Roberts acknowledged Smith has been better than expected, even as a 2016 first-round draft pick.

"He's very confident right now," Roberts said. "When he gets a pitch, he's not missing it. It's really fun to watch. He's going to be fun to track."

Matt Beaty completed the homer fest with his sixth in the eighth inning, and he added a bases-loaded triple in the ninth. A.J. Pollock doubled three times in three at-bats and scored twice. Relief pitcher Caleb Ferguson doubled in the ninth for the first extra-base hit of his career.

Both teams used a backup catcher as their final pitcher. Roberts substituted heavily in the late innings, and reliever Adam Kolarek entered in the ninth to play first base.

The Marlins' Bryan Holaday took the mound with two out and threw one pitch to end the four-run inning. Martin worked around a leadoff single to pitch a scoreless ninth.

Jordan Yamamoto (4-4) allowed four runs in four innings and lost his fourth decision in a row. Wei-Yin Chen gave up six runs in two innings, which hiked his ERA to 7.06.

"The Dodgers are great. Everyone knows that," Yamamoto said. "They're a playoff team, and we're trying to get to that point."

Marlins: RHP Jose Ureña (lower back) threw 24 pitches to batters in a bullpen session. He may work as a reliever when he's activated, because that way he wouldn't need as much rehab time, Mattingly said.

Plate umpire Chad Fairfield left the field in the ninth after a foul tip hit his face mask.

Dodgers: LHP Clayton Kershaw (11-2, 2.77 ERA), who has won his past three starts, is scheduled to pitch Wednesday night. He was originally scheduled to go Tuesday, but Roberts said he decided to give Kershaw an extra day of rest. The three-time NL Cy Young Award winner is only 5-5 in 12 starts against Miami.

Dodgers Dynasty?
With a loaded lineup, the Dodgers aim to win a second consecutive title this season, but will they be able to get it done?
5 days ago