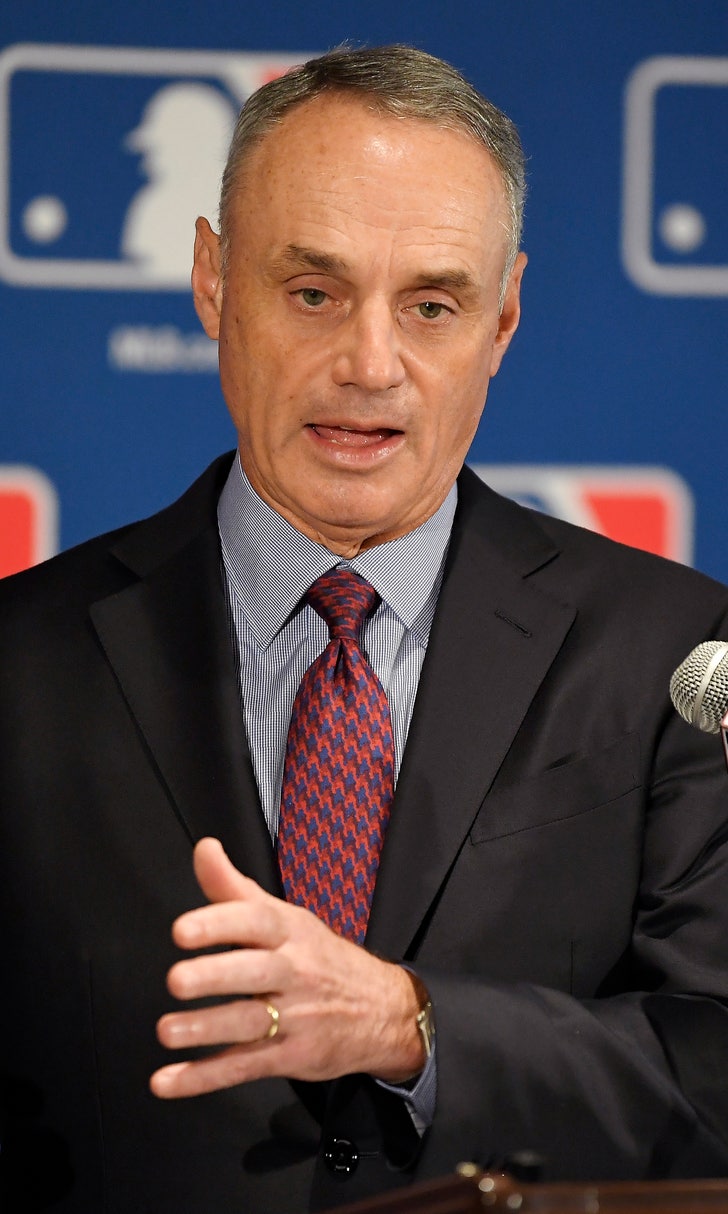 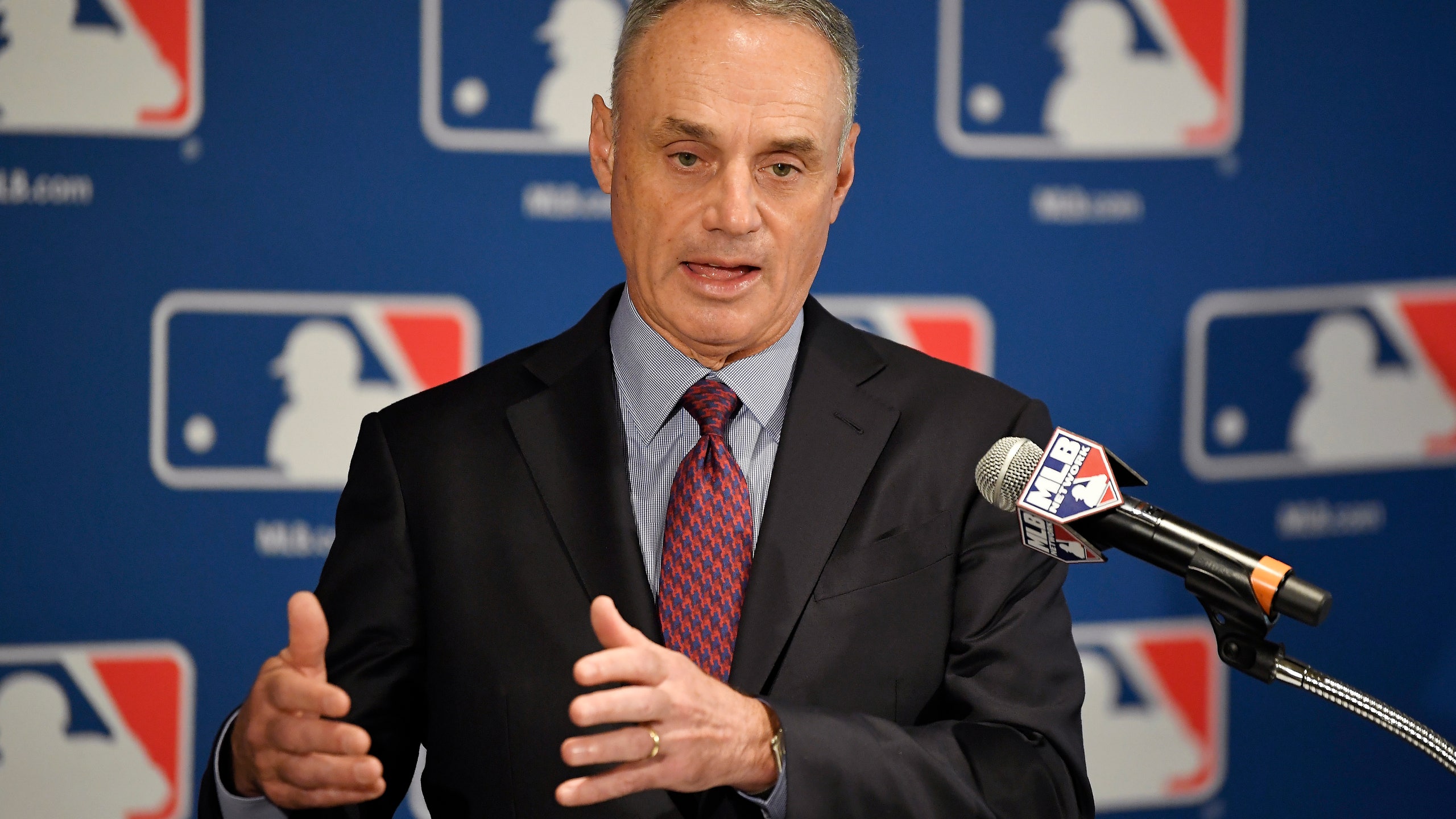 NEW YORK (AP) — Major League Baseball and its players agreed to an unprecedented early start to contract bargaining, a move sparked by union anger that raised the possibility of a return to work stoppages that marred the sport in the late 20th century.

MLB and the union announced modest rule changes Thursday, mostly starting in 2020 such as expanded rosters and a three-batter minimum for pitchers, and the commissioner's office agreed to drop its push for pitch clocks until 2022 at the earliest.

Players have been furious at slow free-agent markets during the first two offseasons of the collective bargaining agreement set to expire Dec. 1, 2021. The agreement increased the level of the luxury tax and prompted more teams to jettison veterans in favor of rebuilding with youth. None of the previous 11 collective bargaining agreements dating to 1966 was overhauled in mid-agreement, except for limited areas defined by the sides when the deal was signed.

Ordinarily, the sides would have started negotiations in March 2021. The union proposed major economic changes this offseason that management refused to consider, such as expanding the designated hitter to the National League, addressing service-time rules that affect eligibility to free agency and salary arbitration. Also, adding provisions to the amateur draft that would make it harder to accumulate high draft picks over several seasons. As part of the deal on rule changes designed to speed the pace of play, management agreed to broader talks.

"I think the common ground that we were able to find here has cracked open a door to a broader conversion," union head Tony Clark said. "And that broader conversion we believe is necessary and in the best interest of both parties. How things manifest themselves moving forward remains to be seen."

Baseball had eight work stoppages from 1972-95 but has reached four straight deals without interrupting play. While there is no deadline, as a practical matter the sides would have to agree to major economic changes before free-agent negotiations start, on the sixth day following the World Series.

"Teams have the right to know what the rules are before they start making decisions regarding what their teams are going to look like," Halem said.

Many players have labeled what rebuilding teams have done as "tanking." Attendance had dropped in three straight seasons, and the average crowd last year fell below 30,000 for the first time since 2003.

"Today's were steps in the right direction, but we want every team to want to win. The fact of the matter there's still really good guys out there are free agents and they can help," Detroit pitcher Matthew Boyd said after a union meeting at Lakeland, Florida. "Fans want to show up and pay money to watch two teams that are good and have the best players in the game."

The union meeting was held on a back field rather than the clubhouse after Tigers outfielder Nicholas Castellanos believed he spotted a team employee in a locker room kitchen, a person familiar with the gathering said. The person spoke on condition of anonymity because no announcement was authorized.

As part of the agreement:

—Trade waivers will be eliminated, meaning no player can be traded after July 31 through the end of the regular season. Players who clear outright waivers can still be claimed and will be eligible for the postseason if they are in the organization before Sept. 1. The sides are discussing when trades can resume, with after the League Championship Series or after World Series among the possibilities. With the change, additional free agents could be subject to draft-pick compensation because a team can make a qualifying offer only to a free agent who had been on the club since opening day.

—Mound visits without pitching changes will be cut from six to five.

—MLB has the right to cut half-inning breaks to 2 minutes this year, down from 2:05 for most games and 2:25 for nationally televised games.

—Fan voting for the All-Star Game will be divided into two rounds, with the top three vote-getters advancing for all positions except the outfield, for which six will move on. The top three voter-getters at each position will receive bonuses of $2,500 to $15,000, which will not count against a team's luxury-tax payroll. Home Run Derby prize money will be increased to $2.5 million, including $1 million for the winner, up from the $725,000 total previous agreed to for 2019, of which $150,000 had been designated for the winner. The amount of money for the winning team, which had been $640,000, will be increased so that each player on that team gets about $5,000 more.

—A joint management-union committee will study potential changes to the strike zone, the height of the mound and the distance from the mound to the plate. It is to issue recommendations by Dec. 15.

—Each team will start the 10th inning with a runner on second in the All-Star Game and spring training games.

—All pitchers must face at least three batters or end a half-inning, unless injured. While the union refused to agree to that provision, it also said it will not challenge it. There were a record 4,262 appearances of exactly three batters last season, according to the Elias Sports Bureau, up from 4,157 the previous year.

—The active roster limit will increase by one to 26 from opening day through Aug. 31 and will drop from 40 to 28 through the end of the regular season. What had been a 26th player for certain day-night doubleheaders through Aug. 31 will become a 27th player in those situations. A joint committee will determine the limit of pitchers, and if there is no agreement the limit will be 13 (14 from Sept. 1 through the end of the regular season).

—As part of the drop in the September roster limit, players may be optioned to a team's spring training facility from Sept. 1 on. The player would continue to get major league service if he had been on the roster continuously since June 1 and losing the service time would deprive him of salary arbitration or free agent eligibility that offseason, but those with split contracts would not receive major league salary.

—Unless changed by the committee, the injured list and option recall minimum period for pitchers will increase from 10 days to 15 in 2020, an effort to slow the use of relievers by teams who shuttle of pitchers between the majors and minors. There still will be a seven-day concussion IL.

—Position players will be prohibited from pitching through the ninth inning unless the player's team is winning or losing by six or more runs when he takes the mound.

—The commissioner's office agreed through the 2021 season not to exercise its right to implement a pitch clock.

With a nod and a wink
Trevor Bauer is new to the Dodgers-Padres rivalry, but he didn't hesitate to jump in with both feet, and one eye closed.
21 hours ago