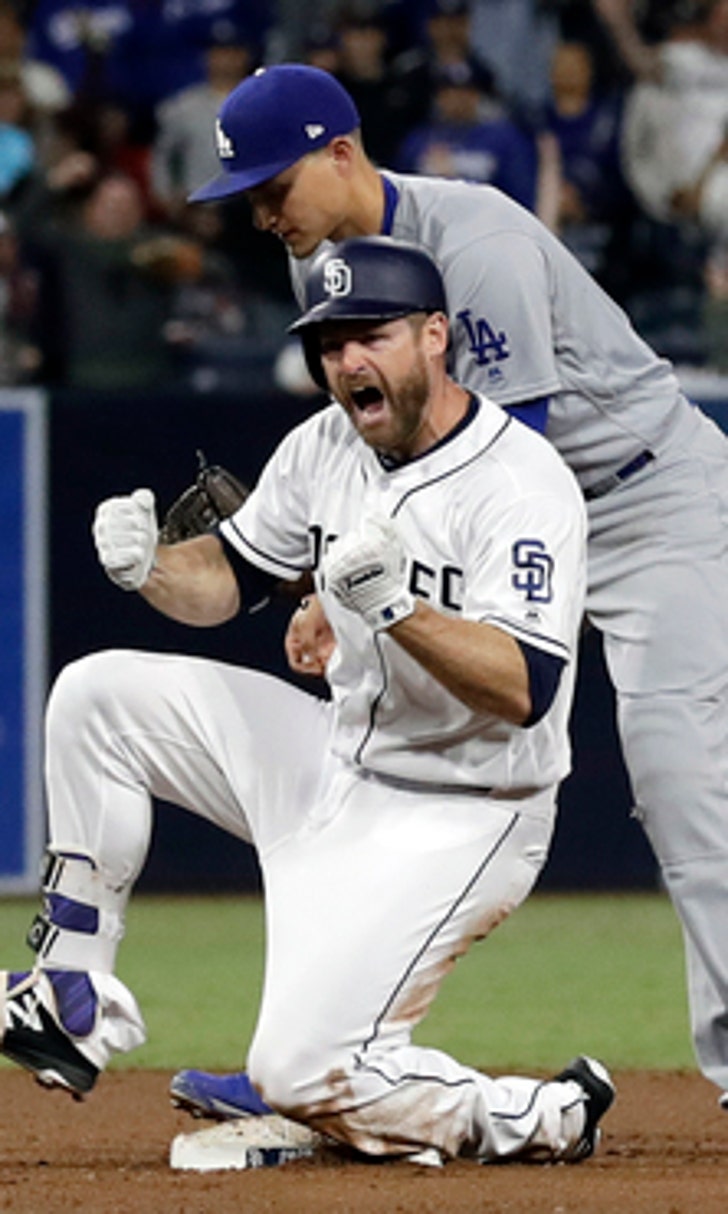 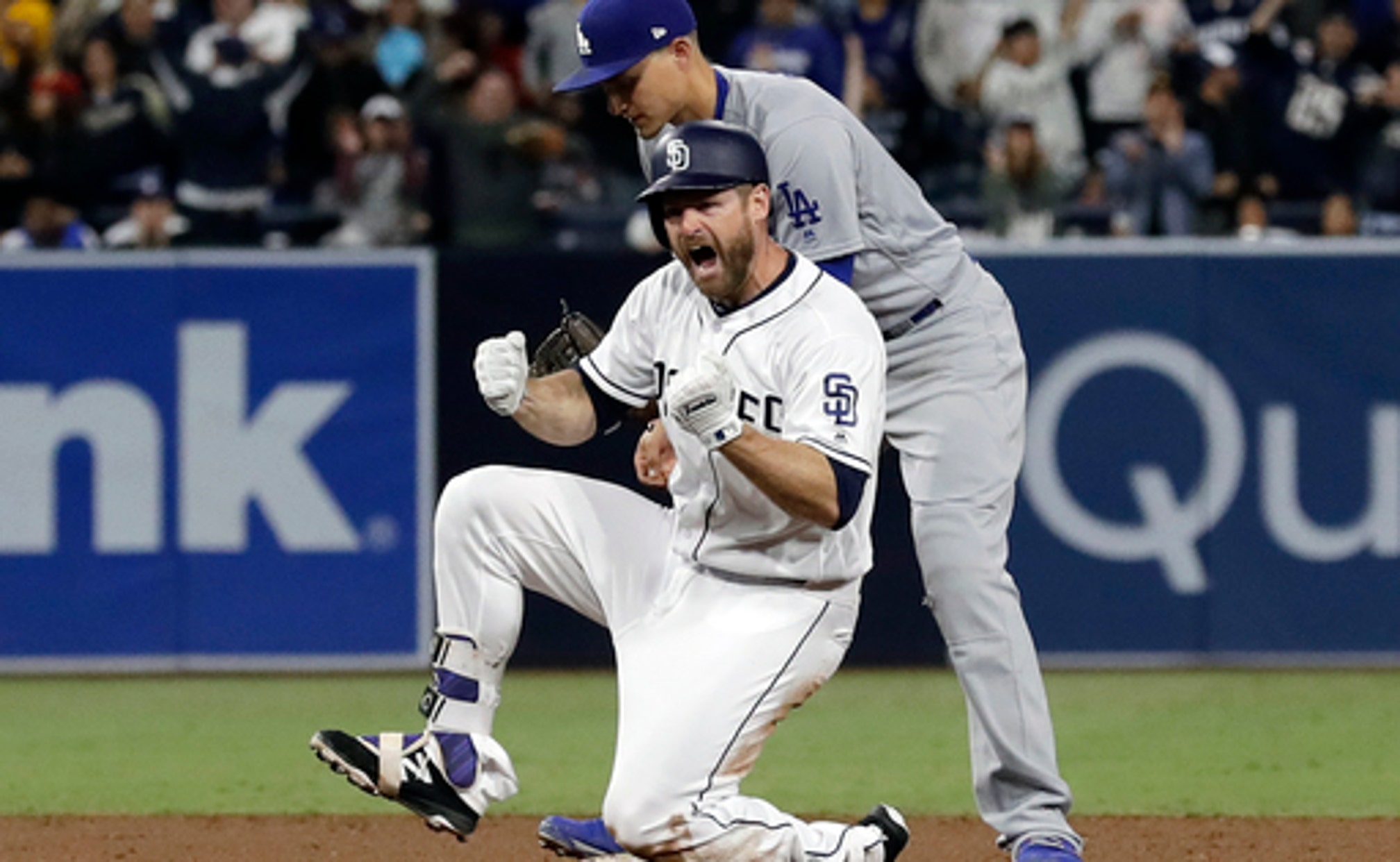 SAN DIEGO (AP) The Los Angeles Dodgers overcame a blown save by struggling Kenley Jansen thanks to a clutch hit by Yasmani Grandal.

Grandal hit a go-ahead, two-run double with one out in the 12th inning and the Dodgers beat the San Diego Padres 7-3 Tuesday night for their season-high third straight win.

''I don't want to imagine where we'd be without him,'' manager Dave Roberts said of Grandal, who hit a grand slam in a 10-3 victory Monday night. ''Behind the plate and obviously at the plate, what he's done. He's done amazing things.''

Grandal doubled into the left-field corner off Tyler Webb (0-1), who was called up earlier in the day from Triple-A El Paso. Corey Seager was aboard on a leadoff single and Enrique Hernandez on a walk. Kyle Farmer added a two-run double off Kazuhisa Makita with two outs.

Grandal was with the Padres from 2012 until being traded to Los Angeles for Matt Kemp in December 2014.

The Dodgers took a combined two-hitter into the ninth before Jansen blew his second save this season. He allowed Eric Hosmer's towering leadoff home run to center, his second, before center fielder Chris Taylor robbed Christian Villanueva of a homer for the second out. Jansen then walked Franchy Cordero, who stole second and took third on Jansen's balk.

Pinch-hitter Chase Headley, who came in hitting just .038, doubled to right on a 3-2 pitch to tie it. Headley clapped his hands and pumped his fists after sliding into the bag. Jansen struck out pinch-hitter Austin Hedges to send it into extras.

Hosmer had struck out in each of his previous three at-bats.

''When you have a two-run lead and you get the best closer in baseball coming into the game, you expect to not use three other relievers,'' Roberts said. ''We have to get Kenley right, and we're going to need him to accomplish what we want to accomplish.

''Right now he's not right, as far as the way the ball's coming out of the hand,'' Roberts said of Jansen, who has an 8.10 ERA. ''We have all the confidence in Kenley. It's one of those things that people go through and he's got to work his way out of it.''

''You've just got to give a greater measure of resolve,'' manager Andy Green. ''Balls have just got to be put in play. We didn't do that. We've got to do better.

''The messaging is great, it's about being stubbon with what you're looking for,'' he added. ''If you get that one pitch, you've got to put it in play. If you let yourself get into pitcher's counts all the time, where you're chasing outside the strike zone, they're going to get you. They're going to punch you out.''

The Padres loaded the bases with one out in the 10th against Ross Stripling before he struck out Hunter Renfroe and Villanueva.

Padres starting pitcher Tyson Ross walked as a pinch-hitter in the 11th but was erased on an inning-ending double play.

''We're still searching for that last big hit for us,'' Green said.

Kemp, reacquired by the Dodgers from Atlanta in December, homered for the second straight game against his former team, a two-run shot with one out in the first off Bryan Mitchell. Taylor hit a leadoff single ahead of Kemp's third homer of the season. Kemp hit a three-run shot Monday night.

Dodgers starter Alex Wood almost got out of the sixth but was undone by his throwing error. He allowed a leadoff double to Carlos Asuaje and walked pinch-hitter Matt Szczur. Jose Pirela made the first out when he was hit by his dribbler in front of the plate. Freddy Galvis hit a comebacker to Wood, who tried to start a double play but threw wide of second base for an error that allowed Asuaje to score. Manager Dave Roberts brought on Tony Cingrani to strike out Hosmer and then summoned J.T. Chargois to strike out Renfroe.

Mitchell, obtained along with Headley from the New York Yankees on Dec. 12, has struggled with the Padres, although he did go six innings for the first time this season. He allowed three runs and five hits while striking out four and walking three. The Padres wanted him so badly that they agreed to take on Headley's $13 million salary for this season.

Padres: OF Wil Myers, on the disabled list with a nerve irritation in his right arm, started a rehab assignment with Class A Lake Elsinore.

Padres: RHP Luis Perdomo (1-1, 4.91) returns from his five-game suspension for throwing behind Colorado's Nolan Arenado on Wednesday, starting a brawl. Tyson Ross is pushed back to Friday night in Arizona.