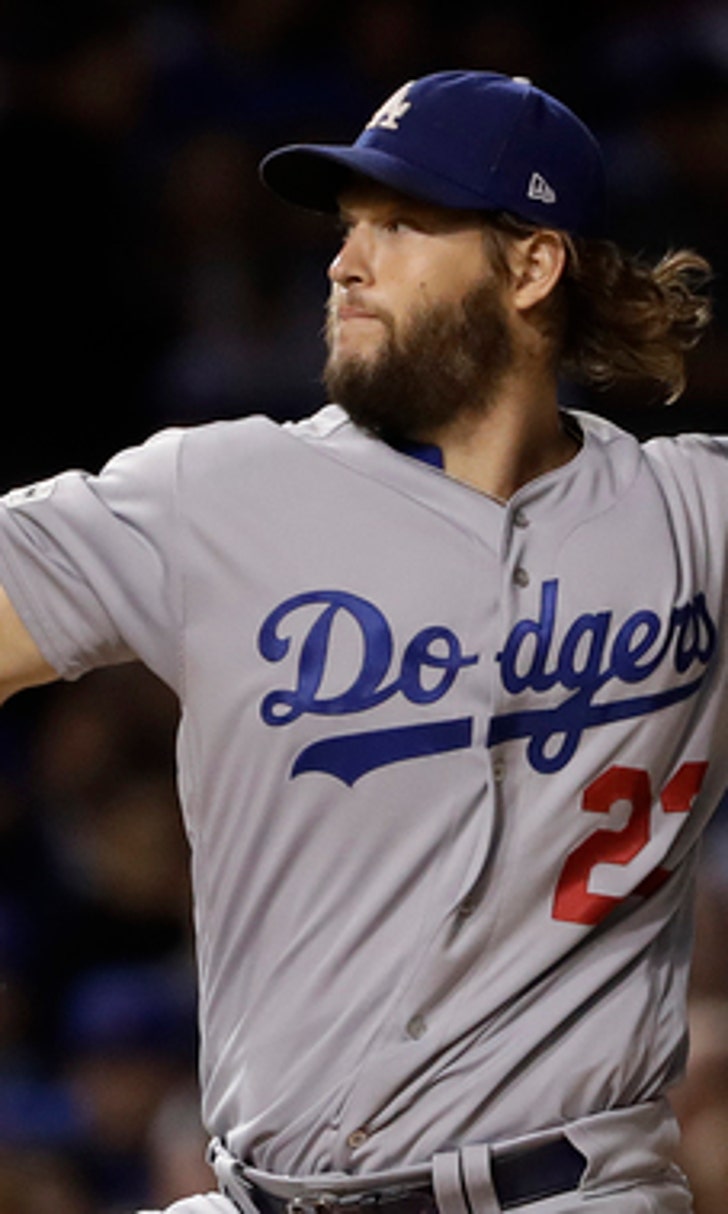 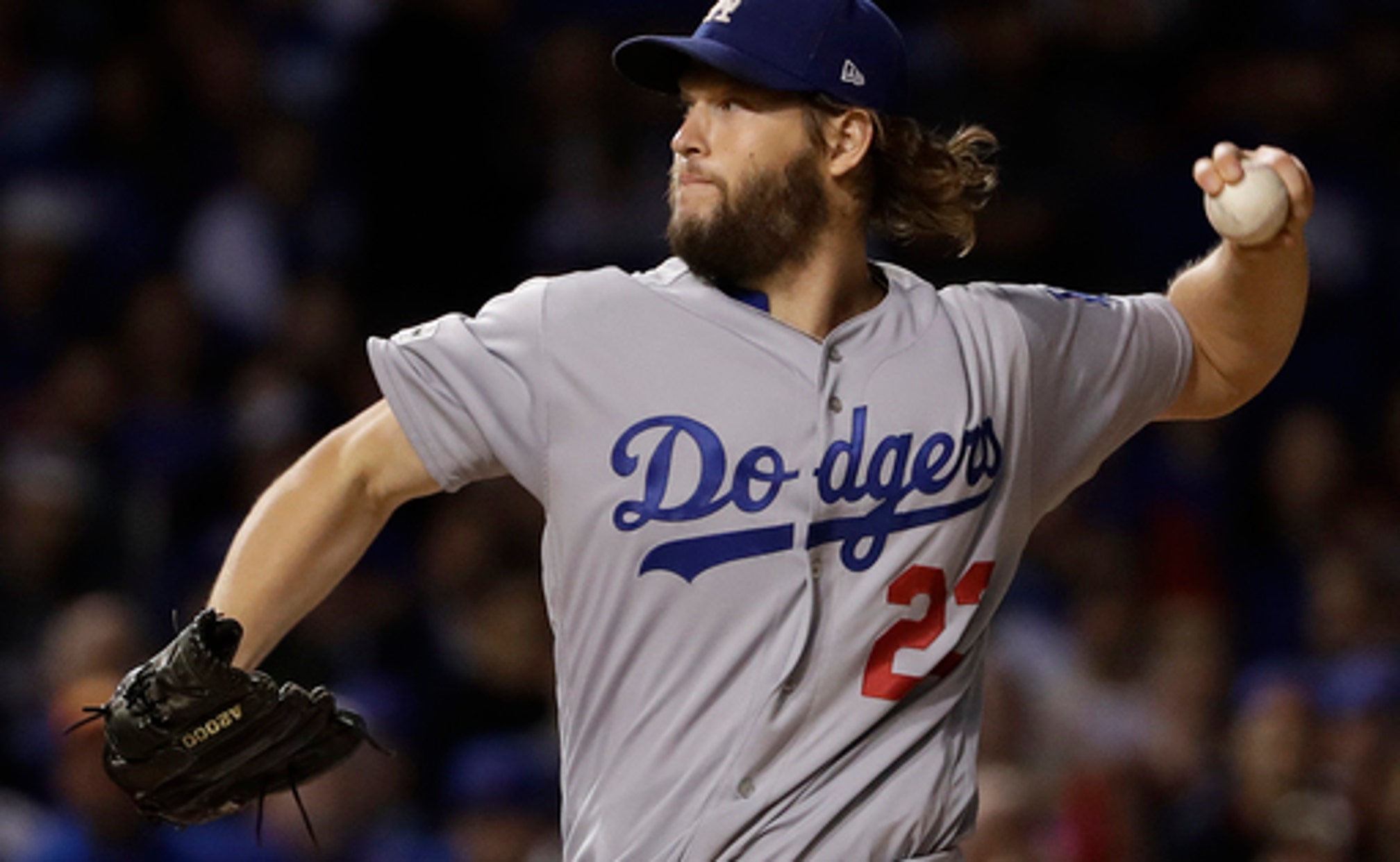 CHICAGO (AP) When it was over, when Los Angeles had finally secured another trip to the World Series and Enrique Hernandez's three big swings had become a part of playoff lore, the emotional utilityman just wanted to give his dad a big hug.

It was one sweet performance for Hernandez, Clayton Kershaw and the rest of the Dodgers.

Hernandez homered three times and drove in a record seven runs, Kershaw breezed through six crisp innings and Los Angeles ended the Chicago Cubs' title defense with an 11-1 rout in Game 5 of the NL Championship Series.

After years of playoff heartache, there was just no stopping these Dodgers after they led the majors with 104 wins during the regular season. With Kershaw firing away at the top of a deep pitching staff, and co-NLCS MVPs Justin Turner and Chris Taylor leading a tough lineup, one of baseball's most storied franchises captured its first pennant since Hall of Famer Tommy Lasorda managed Kirk Gibson, Orel Hershiser and Co. to Los Angeles' last championship in 1988.

''Every night it is a different guy,'' Turner said.

It was Hernandez on Thursday.

The 26-year-old Hernandez connected on the first two pitches he saw, belting a solo drive in the second for his first career playoff homer and then a grand slam in the third against Hector Rondon. He added a two-run shot in the ninth against Mike Montgomery.

Hernandez became the fourth player with a three-homer game in an LCS, joining Bob Robertson (1971 NLCS), George Brett (1978 ALCS) and Adam Kennedy (2002 ALCS). Hernandez's seven RBIs tied a postseason record shared by four other players, who all did it in a Division Series.

Troy O'Leary was the previous player to have seven RBIs in a playoff game, for Boston at Cleveland in the 1999 ALDS.

It was a stunning display for a player with 28 career homers who remains concerned about his native Puerto Rico, which is recovering from a devastating hurricane. He delivered a historic performance in front of his father, Enrique Hernandez Sr., who was diagnosed with a blood cancer related to leukemia in December 2015, but got word last November that he was in remission.

''For me to be able to come here and do something like this is pretty special,'' said Hernandez, who also goes by Kik�. ''My body's here, but my mind's kind of back home. It's hard being away from home with what's going on.

Kershaw will be on the mound again when the Dodgers host the New York Yankees or Houston Astros in Game 1 of the World Series on Tuesday night. The Yankees have a 3-2 lead heading into Game 6 of the ALCS at Houston on Friday night, so one more New York win would set up another chapter in an old October rivalry between the Yankees and Dodgers. Los Angeles is 6-12 in the World Series, including one victory over New York while the team was still in Brooklyn.

Los Angeles made the playoffs eight times in the previous 13 seasons and came up short of its 22nd pennant each time, often with Kershaw shouldering much of the blame. The three-time NL Cy Young Award winner took the loss when his team was eliminated by the Cubs in Game 6 of last year's NLCS at Wrigley Field.

The ace left-hander was just OK during his first two starts in this year's postseason, but Los Angeles' offense picked him up each time. Backed by Hernandez's powerful show in Chicago, Kershaw turned in an efficient three-hit performance with five strikeouts and improved to 6-7 in the playoffs - matching Burt Hooton's club record for postseason wins.

''To get to be on the mound tonight and get to be going to the World Series on the same night, it's a special thing,'' Kershaw said. ''Who knows how many times I'm going to get to go to the World Series? I know more than anybody how hard it is to get there. So, I'm definitely not taking this one for granted.''

When Kenley Jansen retired Willson Contreras on a liner to shortstop for the final out, the party was on . The Dodgers poured out of the dugout and mobbed their dominant closer near the mound, and a small but vocal group of Los Angeles fans gathered behind the visitors' dugout and chanted ''Let's go Dodgers! Let's go Dodgers!''

On the field, manager Dave Roberts hugged Lasorda and told the iconic skipper the win was for him.

Kris Bryant homered for Chicago, but the NL Central champions finished with just four hits in another tough night at the plate. Each of their eight runs in the NLCS came via the long ball, and they batted just .156 for the series with 53 strikeouts.

Long playoff runs in each of the last two years and a grueling five-game Division Series against Washington seemed to sap Chicago of some energy, and its pitching faltered against sweet-swinging Los Angeles. Jose Quintana was pulled in the third inning of the final game, and the Cubs never recovered.

''They executed their plan,'' Bryant said. ''They pitched great and the bullpen was lights out. That makes for a tough time scoring runs.''

Turner and Taylor helped put it away for Los Angeles, contributing to a 16-hit outburst while closing out a pair of impressive performances.

Turner singled home Taylor in the Dodgers' five-run third, giving him seven RBIs in the series and 24 throughout his postseason career. Taylor finished with two hits and scored two runs as the Dodgers, who have won five straight NL West titles, improved to 7-1 in this postseason.

Taylor's versatility helped Los Angeles cover for the loss of All-Star shortstop Corey Seager, who missed the series with a back injury, but is expected to return in the next round. Coming off a breakout season, the 27-year-old Taylor hit .316 with two homers and scored five times against the Cubs.

''I couldn't be happier to be a part of this and be with these guys,'' Taylor said. ''It's been an unbelievable year, and I'm just super excited.''