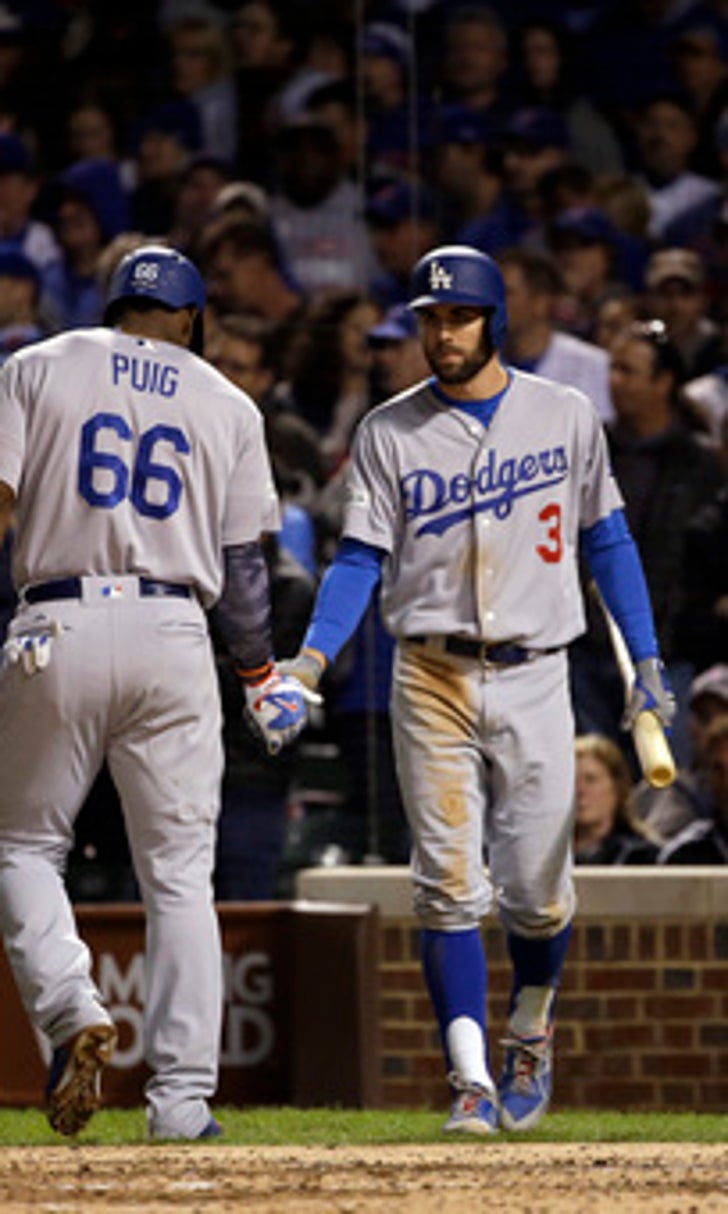 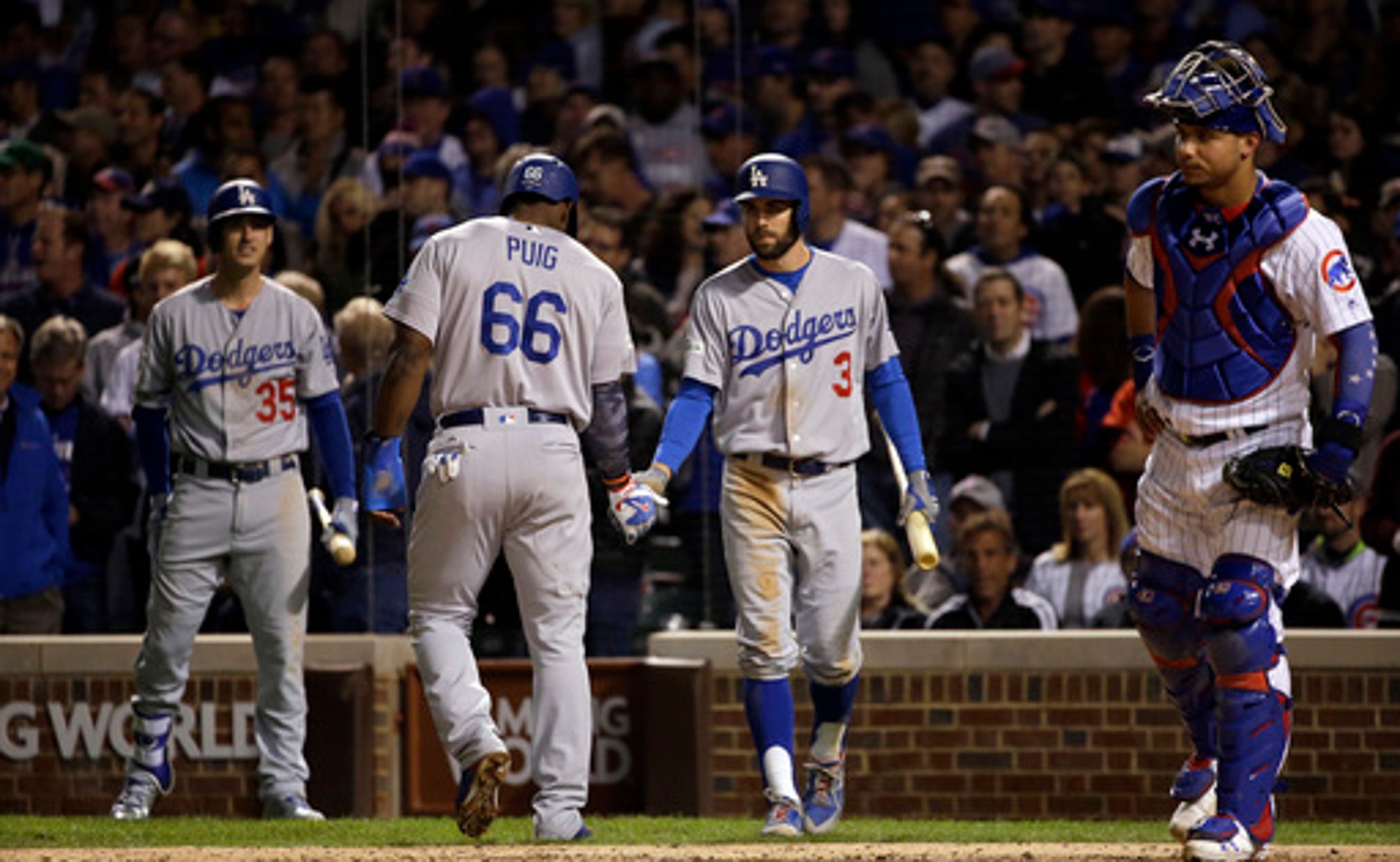 CHICAGO (AP) The Los Angeles Dodgers have a tough lineup, a talented pitching staff and a manager making all the right moves.

Yu Darvish pitched sparkling ball into the seventh inning, Chris Taylor homered again and the Dodgers beat the Chicago Cubs 6-1 on Tuesday night to open a 3-0 lead in the NL Championship Series.

Andre Ethier also went deep and Taylor added an RBI triple in the fifth as Los Angeles improved to 6-0 in this postseason, setting a franchise record for consecutive playoff wins. Yasiel Puig had two more hits in another entertaining performance that included an impressive bat flip - on a long foul ball in the first inning.

''The focus has certainly been heightened in the postseason,'' manager Dave Roberts said.

Looking for a four-game sweep and their 22nd pennant, the Dodgers will send Alex Wood to the mound Wednesday night at Wrigley Field with a chance to reach the World Series for the first time since Hall of Famer Tommy Lasorda managed Kirk Gibson, Orel Hershiser and Co. to the club's last championship 29 years ago.

Jake Arrieta, eligible for free agency after the season, pitches for the Cubs in what could be his final start with the team.

''I think we've won four games in a row before,'' Chicago slugger Kris Bryant said. ''Obviously, it's going to be a tougher road. But it'll make the story that much better. Can you imagine that?''

Los Angeles was eliminated by Chicago in the NLCS last year, but this is a different group of Dodgers. Their patient lineup is coming up big in key spots and the pitching staff is much deeper, especially since Darvish was acquired in a trade with Texas in the final minutes before the July 31 deadline.

Not even a return to Wrigley could get the Cubs back on track after a rough stay in Los Angeles. Chicago manager Joe Maddon juggled his lineup, inserting Kyle Schwarber into the No. 2 slot and benching slumping second baseman Javier Baez, but the defending World Series champions were shut down by another Dodgers starter and more stellar relief from the NL West champions.

''I really didn't change much approach-wise from first inning until the end of the game,'' Darvish said through a translator. ''I just kept pitching the same way.''

Making their third straight appearance in the NLCS, the weary Cubs also hurt themselves with a couple of big mistakes. Carl Edwards Jr. walked Darvish on four pitches with the bases loaded and two outs in the sixth, continuing a rocky postseason for the reliever and leading to a round of boos from a frustrated crowd of 41,871.

A passed ball brought home another run in the eighth, and pinch hitter Kyle Farmer hit a sacrifice fly to make it 6-1.

Darvish departed after striking out Addison Russell in the seventh, pausing for congratulations from his whole infield before heading to the dugout. The Japanese right-hander allowed six hits, including Schwarber's first-inning homer, in his second career playoff win - both this year. He struck out seven and walked one.

Tony Watson got two outs, Brandon Morrow worked the eighth and Kenley Jansen closed it out after Ross Stripling gave up two hits in the ninth. With Roberts pushing the right buttons, Los Angeles' bullpen has yet to allow a run in the series.

The only four-game postseason sweep for the Dodgers came in the 1963 World Series against the New York Yankees. If Los Angeles can finish off Chicago on Wednesday, the Dodgers would have five days off before hosting the Yankees or Houston Astros in the World Series opener.

Schwarber's sixth career postseason homer got Chicago off to a fast start, but Jon Jay struck out with two on to end the inning. The Dodgers responded with Ethier's leadoff drive in the second and Taylor's second homer of the series in the third, a mammoth shot to center off losing pitcher Kyle Hendricks.

''We had a chance obviously, early,'' Maddon said. ''We hit some balls well early in the game, and then he settled in.''

Ethier had two hits in his first start of this year's playoffs after he missed most of the season with a herniated lumbar disk. Taylor also had two hits and is 4 for 14 for the series, helping make up for the loss of All-Star shortstop Corey Seager to a back injury.

Tuesday was the 13th anniversary of Roberts' memorable stolen base for Boston in Game 4 of the 2004 ALCS against the New York Yankees. The Red Sox were three outs from elimination when Roberts ran for Kevin Millar, swiped second and scored on Bill Mueller's single.

Boston went on to rally past New York and sweep St. Louis for its first World Series championship since 1918. Roberts said he never mentions the steal to his players, but it comes up occasionally.

''Yu Darvish about two weeks ago I guess was surfing the internet, and there was an `aha' moment,'' Roberts said. ''He ran across the stolen base and kind of put 2 and 2 together and didn't realize that was his manager. So he proceeded to kind of awkwardly approach me about it and talked about my goatee and how I could steal a base.''

Dodgers: Wood, who had a career-high 16 wins this season, will make his first appearance since Sept. 26. He was lined up for Game 4 of the NLDS, but the Dodgers swept the Diamondbacks in three games.

Cubs: Arrieta has pitched just 14 1/3 innings since Aug. 30, including four innings of two-hit ball against Washington in Game 4 of the NLDS. The 2015 NL Cy Young Award winner was hampered by a right hamstring injury at the end of the season.