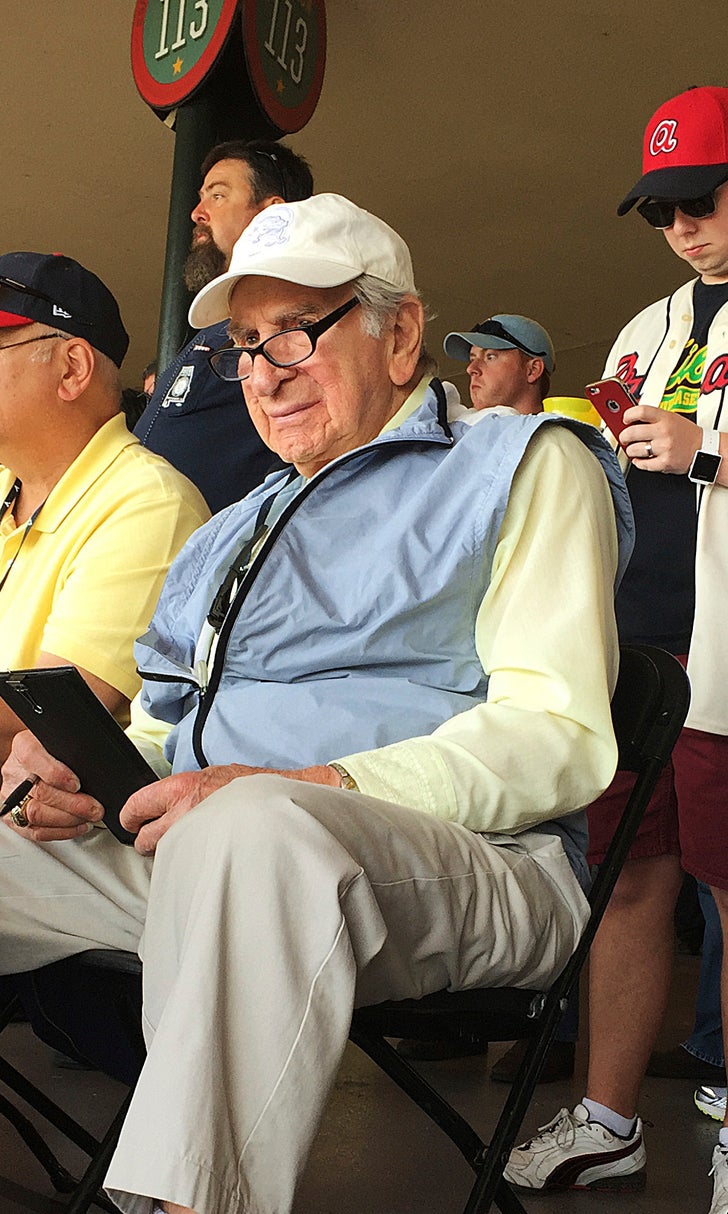 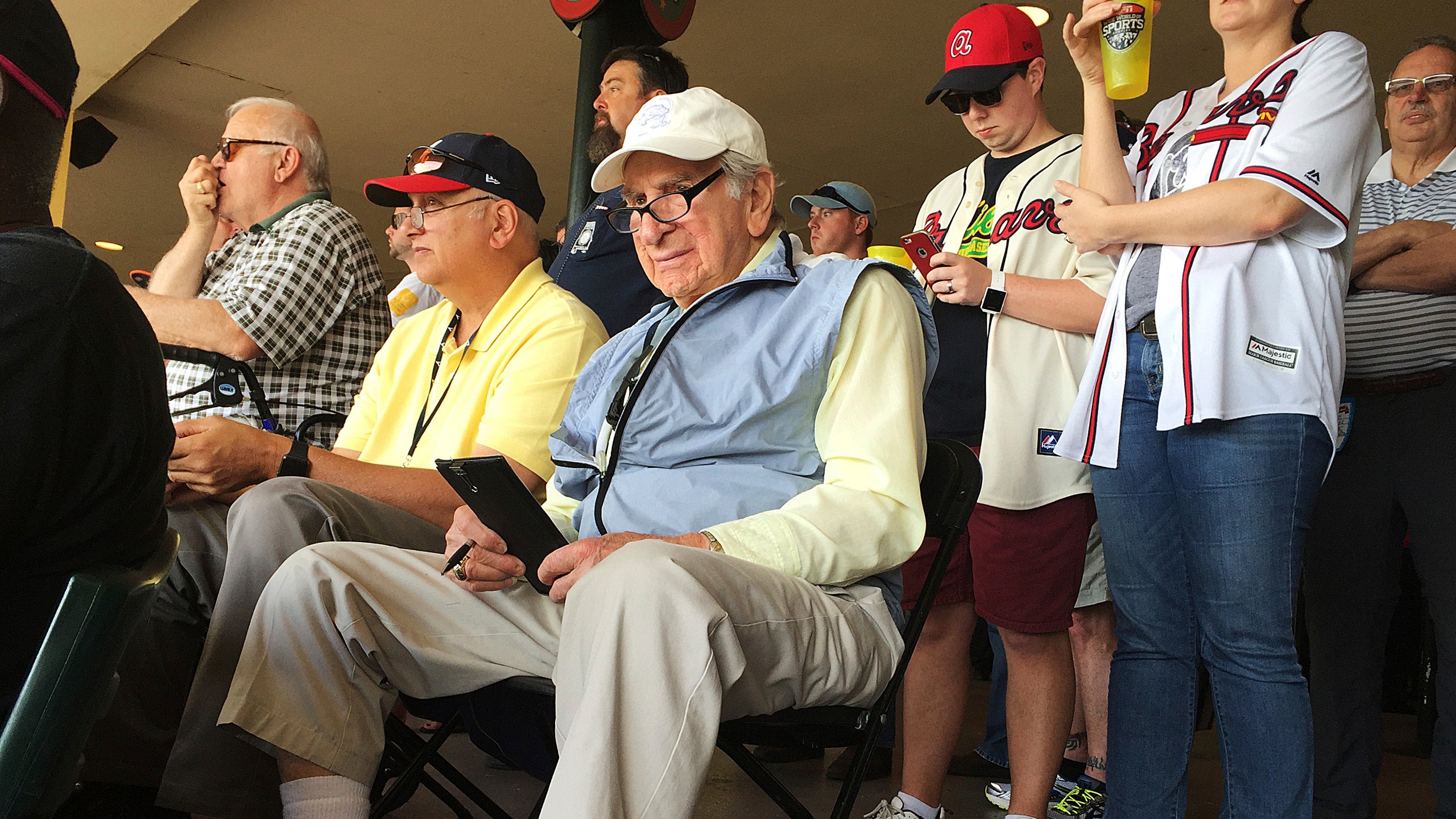 It won't seem quite the same without T-bone.

Yet, do not let your heart grow heavy.

He's going out like he lived for more than 93 years — surrounded by family and friends, accompanied by overwhelming love and stories that will endure long after he's gone.

"It's like we're doing the funeral, the celebration of his life, a little bit early," said his daughter, Gail Przeclawski, when reached by phone Monday morning at the family home where Giordano was spending his final days, "and he got to enjoy every moment of it."

Giordano spent nearly all of his full life as a baseball man. He was a major league player (for 11 games with the late, great Philadelphia Athletics), a minor-league manager, a front-office executive. More than anything, he was a scout, one of those guys who combed the backwoods and backwaters searching for the game's next big star.

It was a job he loved, a job he was good at, a job he held with the Atlanta Braves right up until what would be the very last year of his life.

"I'm going to do this until I die," Giordano told me back in 2016, when I first met him at the Braves' spring training complex, located within the confines of Disney World. "I can't wait to get up in the morning and go to the ballpark."

T-bone (a nickname that goes back to his days growing up in New Jersey, when his father would always make him a steak as a pregame meal) had every intention of coming back for his 72nd season — staked out behind home plate, a stopwatch in one hand, a lineup card in his lap, the games unfolding before his eyes as he gleaned those tell-tale signs of a player's strengths and weaknesses.

Can't hit a curve ball. Great speed from first to third. Gets a poor jump on the ball. Strong throwing arm. .

Then, the blood infection struck out of nowhere.

Not long after climbing three flights of stairs during a family vacation to the beach, Giordano started feeling poorly. He came down with a 102-degree fever. The doctors weren't sure what caused the infection.

Giordano spent nearly three weeks in the hospital. It looked as though he would survive.

Unfortunately, the infection returned. The doctors knew he wasn't nearly strong enough to ward it off like he did the first time. He might live a bit longer, but his quality of life would be greatly diminished. No one wanted that, so he was sent home to die.

That's where this sad story takes a beautiful turn.

These last few days in Orlando have given so many people a chance to show how much Giordano was loved.

Everyone from Hall of Famer Reggie Jackson to longtime baseball executive John Hart to an Uber driver who hauled T-bone around to the owner of a local Italian restaurant that Giordano frequented for a good bowl of pasta have called or stopped by to say farewell.

Przeclawski has watched it all with pride.

"I'm still learning things about my dad that I never knew," she told me in that phone call, her voice both sad and joyful.

For the record, here's a highlight reel, gleaned from my 2016 interview with T-Bone:

— Growing up in Newark, New Jersey, he played on the high school team but fibbed to his parents about his reason for staying late after school. His father, who owned a grocery store, believed young Tommy should focus on his schoolwork and devote any free time to working at the family business. "I used to hide my spikes," Giordano told me. "Well, my dad got hold of them and put them on the butcher block. He cut them up. He cut everything up. My bat, my glove, everything."

— Giordano was called up to the majors by the Athletics toward the end of the 1953 season, giving him a chance to meet one of the game's most towering figures, Connie Mack. In his very first game with Philadelphia, the slick-fielding shortstop homered off the facade of old Shibe Park, going deep against 20-game winner Virgil Trucks of the Chicago White Sox.

— Also in 1953, while playing with Class A Savannah, Giordano took the infield alongside a 19-year-old second baseman on his way up, a guy named Henry Aaron. The future home run king led the league in virtually every offensive category except one. Aaron hit 22 homers — two less than Giordano.

— After his playing days, Giordano was responsible for the Baltimore Orioles drafting Cal Ripken Jr. During a stint in Cleveland, T-bone signed off on the Indians picking Manny Ramirez. His scouting mantra was "get in the house," which gave him a chance to check out a prospect's family and any off-the-field red flags. "I love doing that kind of work," he said.

Now, everyone is getting a chance to return the love.

His daughter set out a book for visitors to sign. As I was speaking to her, someone arrived at the door. She instructed them to turn to the fourth page of the book. The first three pages were already filled up.

"He's gotten to attend his own funeral service the last four days," Przeclawski said. "He's had a blast."

But the end is drawing near. T-bone lost the ability to speak and swallow Sunday night.

Her voice choked with emotion, Przeclawski noted that Wednesday would've been her mother's birthday. She died less than a year ago. She and T-bone were married for 70 years.

"I think they're going to be celebrating her birthday in heaven," their daughter said.

Giordano will be buried just outside the family home, with a view of a lake.

His daughter issued an invitation to come by and visit the next time I'm in Orlando.

"We'll tell some great stories about my dad," she said.