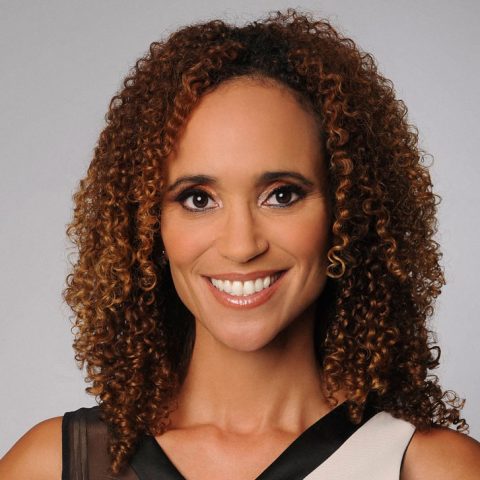 Karyn Bryant works as FOX Sports’ lead UFC host on FOX UFC programs, including FS1 UFC WEIGH-IN, FS1 UFC PREFIGHT, and FS1 UFC POSTFIGHT SHOWS. She hosts UFC 1-ON-1 shows and co-hosts TUF TALK, the weekly late-night companion show to THE ULTIMATE FIGHTER on FS1, in addition to being on UFC TONIGHT, the weekly news and information show of the UFC on FS1. She also serves as a reporter for NFL on FOX games.

In addition to her work with FOX Sports, Bryant currently hosts the weekly UFC NOW show on the UFC’s Fight Pass service, as well as co-hosts the MMA H.E.A.T. Podcast and Trocação Podcast (in Portuguese).

Bryant began working with FOX Sports in 2012 on the FUEL TV network as an anchor of UFC weigh-ins, as well as pre- and postfight shows. When FOX Sports launched FS1 in 2013, the UFC shows moved to that network and she moved with them.

In 2006, Karyn began her sports broadcasting career when she joined the “Showtime Championship Boxing” announcing team of Steve Albert, Al Bernstein and Jim Gray. After establishing herself in combat sports coverage, Karyn was invited by CBS to join their “Elite Xtreme Combat” announcing team, debuting mixed martial arts for the first time on primetime network television May 31, 2008.

Prior to her work with CBS and understanding that mixed martial arts was about to explode around the world, Karyn co-founded MMA H.E.A.T. in 2007. Initially an on-line destination for interviews, event coverage and lifestyle stories surrounding the sport, MMA H.E.A.T.’s popularity grew very quickly. In 2010-2011, Karyn produced and hosted 23 half-hour episodes of “MMA H.E.A.T.” for the MAVTV cable channel.

Bryant graduated from Brown University with a double major in political science and sociology. She began her professional broadcasting career as a 22-year-old VJ for MTV. Aided by a sharp personality, and a profound passion for music, Karyn was tapped by the then fledgling FX Cable Network to host the live, daily music show “Sound FX”.

Using live television to hone her skills as a broadcaster, Karyn was chosen by TNT to host an interstitial series of entertainment vignettes called “Rough Cut.” The success of the vignettes prompted TNT to turn “Rough Cut” into a weekly television series hosted by Bryant. Moreover, this marked the beginning of Karyn’s professional relationship with Turner Broadcasting.

TBS soon launched the wraparound series “Movies, For Guys Who Like Movies.” Strong enough for the action, and sexy enough to be a Bond girl, Karyn could be seen engaging the enemy in simulated dogfights or piloting a Navy LCAC Hovercraft.

Impressed with her on camera presence and her encyclopedic knowledge of music, Lorne Michaels hand-picked Karyn to host his new daily game show for VH1, “Name That Video.”

She also hosted CNN’s “Talk Back Live”. In 2004, Karyn was chosen to co-anchor CNN’s revamped “Showbiz Tonight.” “Showbiz” was the country’s only live, primetime, hour-long daily entertainment news show. When the series premiered in early 2005, Karyn earned the distinction of being the only African American woman anchoring in primetime on any cable news channel.

Music, entertainment and news are still not the whole story for Karyn. Growing up in the suburbs of Boston, Karyn became a rabid Patriots and Red Sox fan. That passion drew ESPN into her media fan base and she soon joined them for their first live New Year’s show as the countdown to 2006 began.

Raised in Massachusetts, Karyn now lives in Los Angeles with her husband Wade and their daughter Aurora.