To download a photo, select an image size from the two options below, and enter a valid email address in the email address field below.
NextTom O’Toole 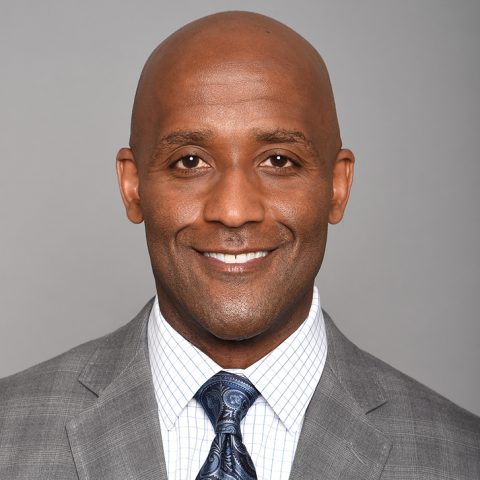 In addition to his work at FOX Sports, Custer is the main host of Showtime Championship Boxing on Showtime Networks. He also called play-by-play for CBS Sports and hosted CBS Sports Network’s college basketball shows. He also hosted a national NFL Radio show on ESPN Radio with Donovan McNabb for two seasons.

Custer was a host for SNY-TV in New York for 10 years and was one of the original hires for the network in 2006. He served as a host for the daily show “Wheelhouse” and for New York Jets programming, including the critically acclaimed “Jets Post Game Live.” He also led SNY weekly shows “Jets Nation” and “Jets Extra Point” and was one of the anchors for SNY’s “Geico Sportnite,” a 30-minute news, highlight and debate program. He was play-by-play announcer for SNY’s Sunday night Broadway Boxing, featuring some of the best talent in the sport. Through his work at SNY, he earned multiple Emmy awards – one for the network’s riveting documentary entitled “Baseball in Africa: A Diamond in the Rough.” In 2011, Custer won another Emmy for a feature on one of the New York Jets coaches.

Custer began his broadcasting career in his hometown of Columbus, Ohio, at the ABC affiliate WSYX-TV, covering the Columbus City Hall and Ohio State. Soon after, he moved to Dallas, where he spent nearly a decade doubling as a city hall reporter and sports anchor, namely on Dallas Cowboys and Dallas Mavericks pregame shows. While in Texas and Ohio, he received a number of civic awards as well as awards from the Associated Press and the Society of Professional Journalists.

Custer is an avid reader and a national motivational speaker. Currently, he is a spokesman for the Prostate Cancer Foundation. He is a lifetime member of Kappa Alpha Psi, a member of NABJ, and graduate of Hampton University. A prostate cancer survivor, he resides in New Jersey with his wife and three sons.