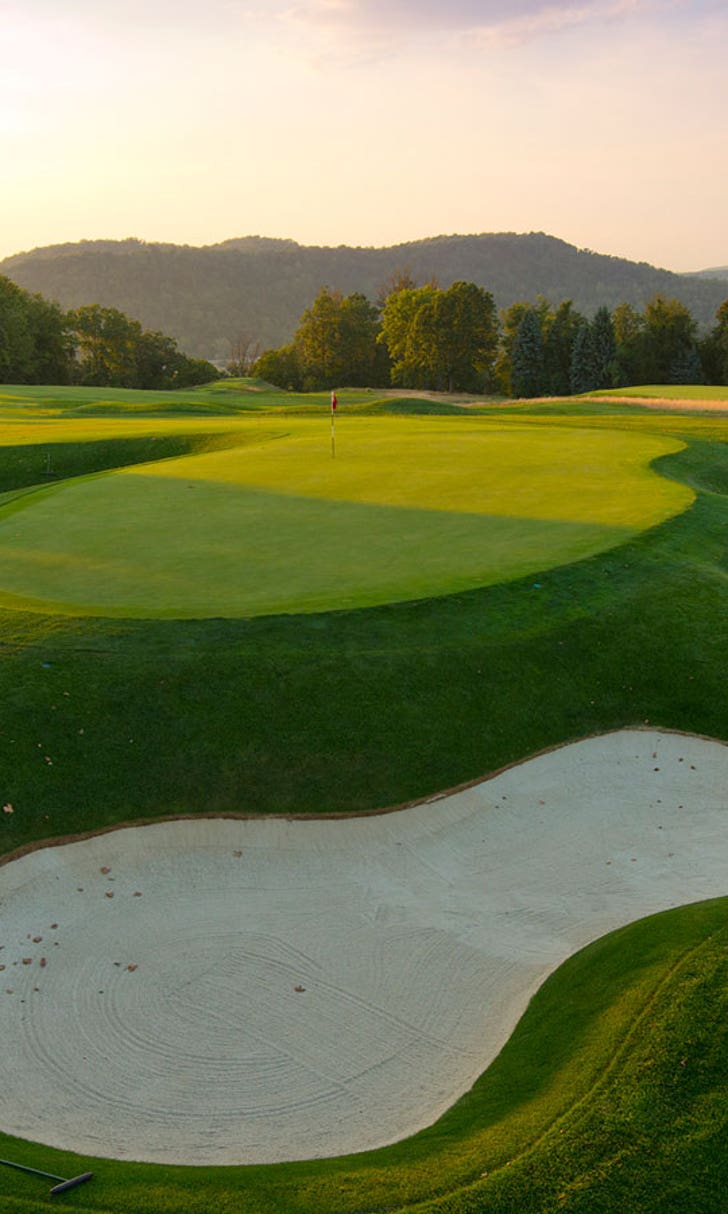 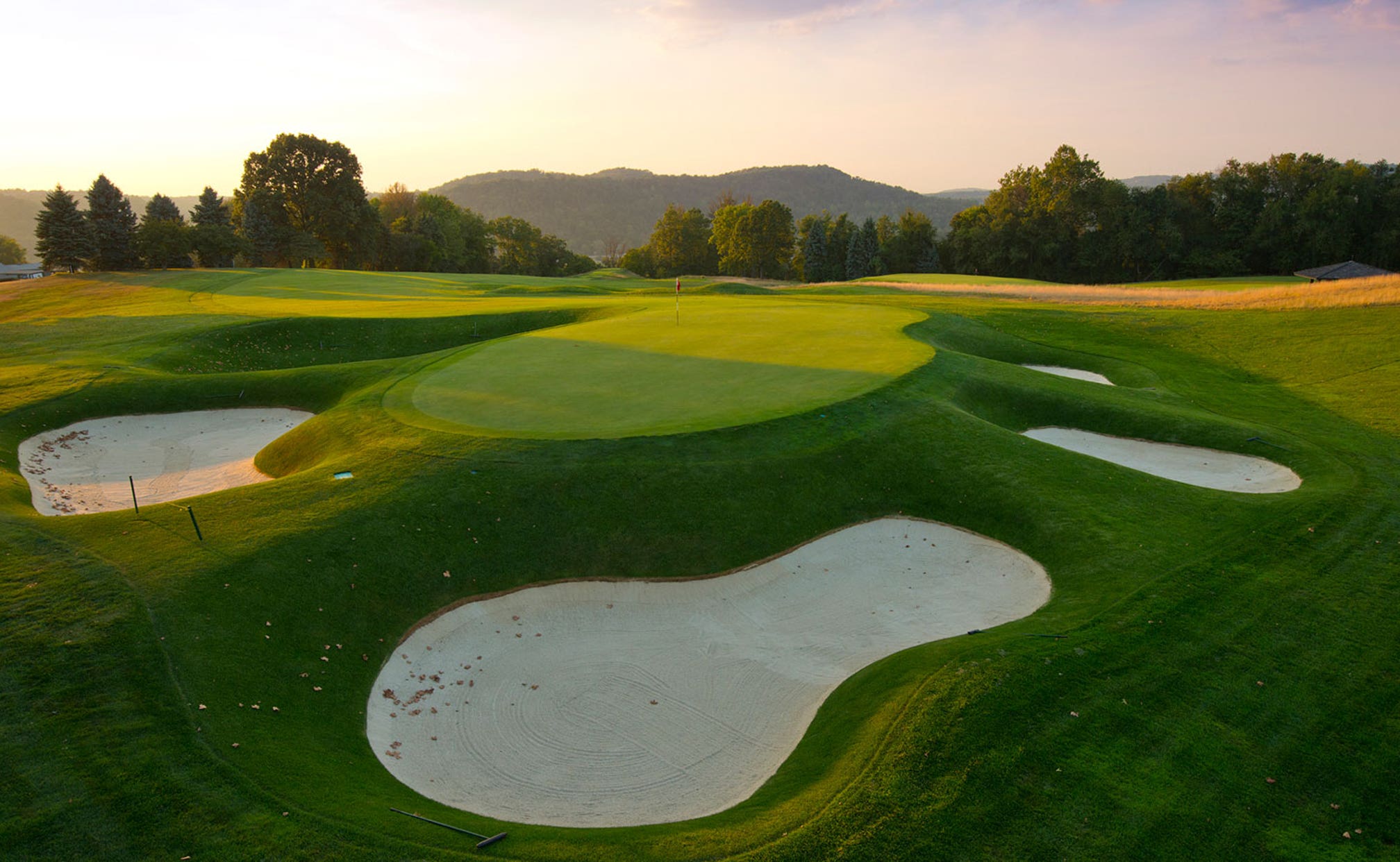 Three shots at Oakmont that could make or break the U.S. Open 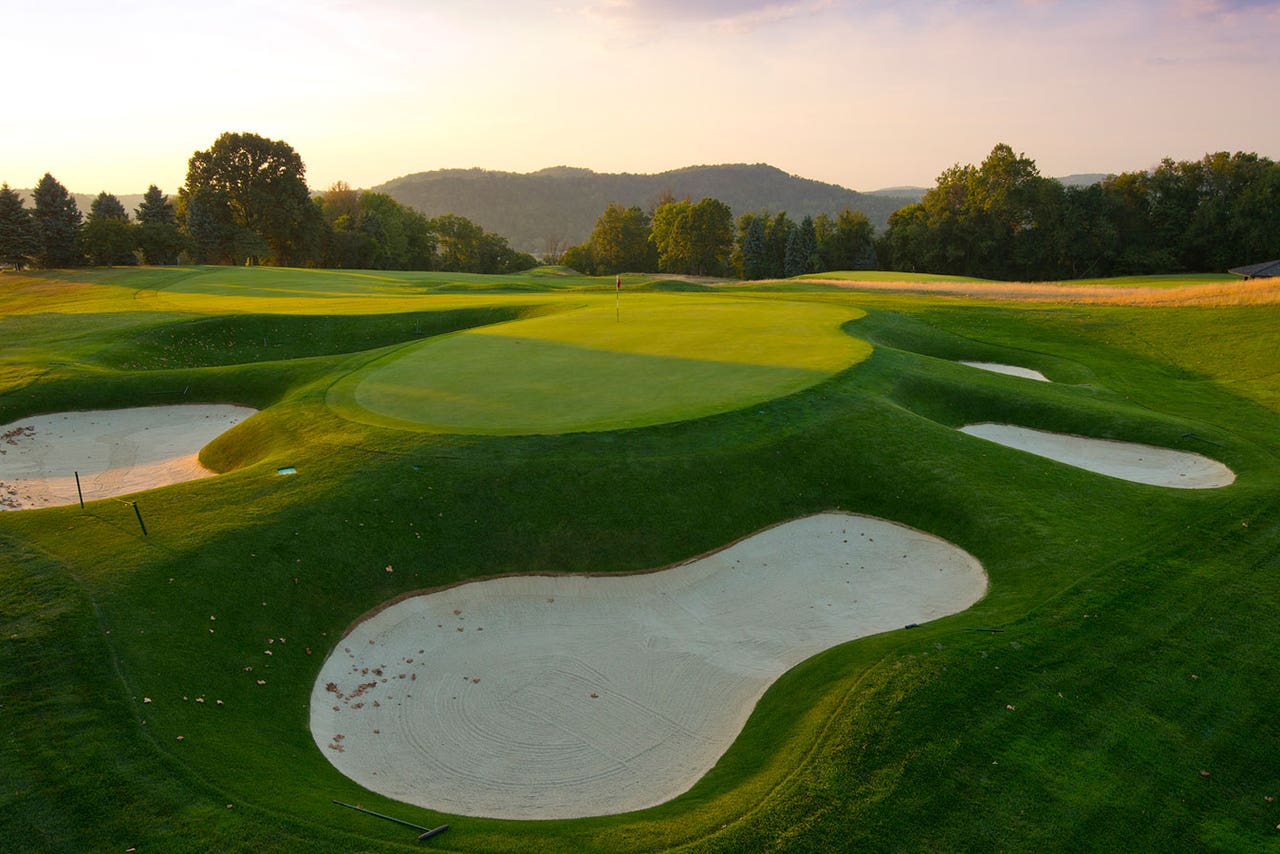 So on the heels of our incredibly successful "shots that can doom your round" piece for the Masters (sarcasm, of course, because the 12th is always that tiny demon that can doom a Champions Dinner invite), we decided to roll out the three shots here at Oakmont that could flip the script on guys coming down the stretch on Sunday at the U.S. Open.

The lone par-5 on the back nine might be the hardest par-5 I've ever played, and it's not just because it has nine bunkers in play off the tee, ditches down the left and right of the fairway for the second shot, and a massive bunker around 150-yards out that is basically a pitch-out if you find it.

Whew, that was even exhausting to type. While par-5s are normally the place to get shots back, the 12th at Oakmont is one that can balloon your scorecard if you don't play it perfectly, and I find the second shot one of the most stressful on any par-5 on the planet.

Either you decide to lay back of the aforementioned bunker and leave yourself some 170-180 yards for your third, or you hit a hybrid or three-wood over that left bunker into a fairway that kicks everything right into an area that, you guessed it, has more bunkers (and a ditch, and lengthy rough, and hungry lions ... OK fine, one of those is false). 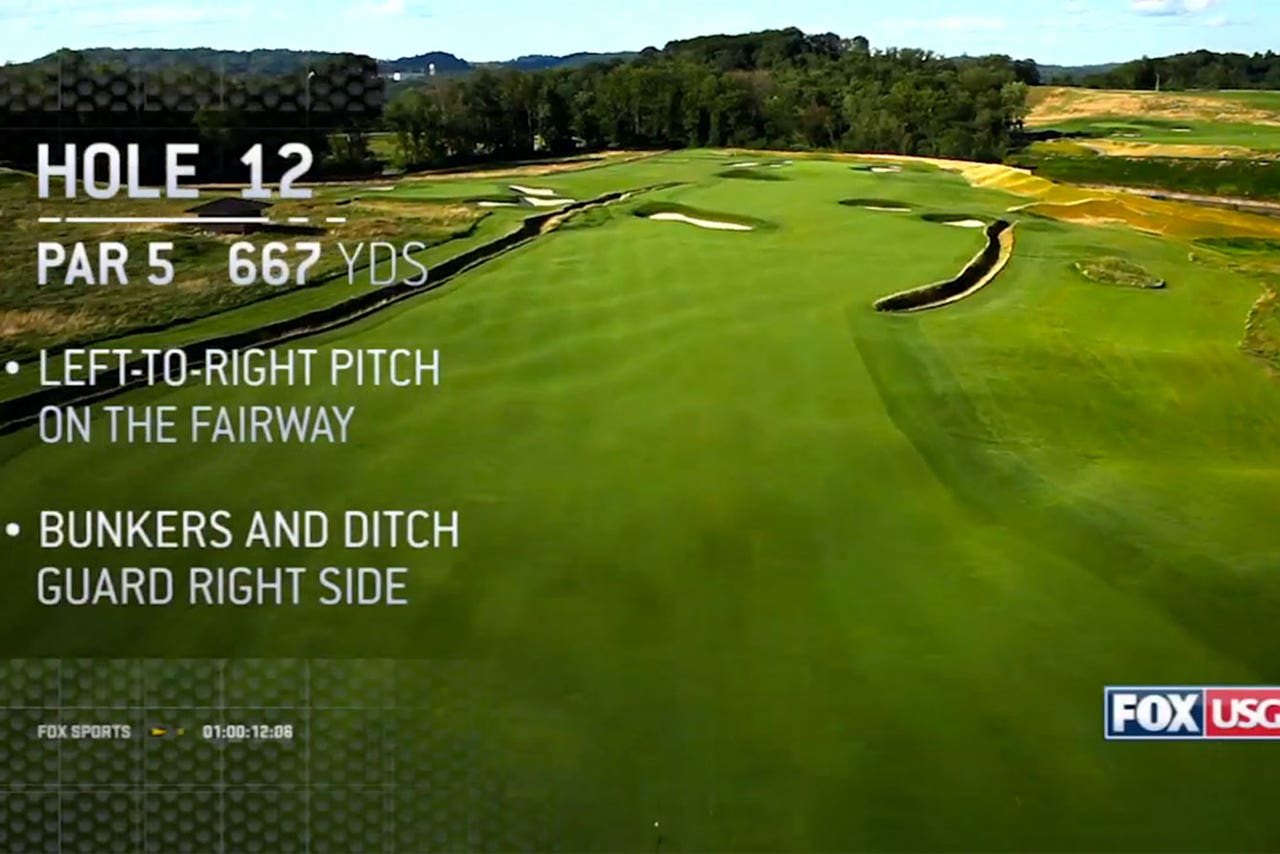 With ditches left and right and a slew of bunkers on the horizon, the second shot on the par-5 12th is a beast.

And all of this is to set up a third shot that comes into a green that slopes front-to-back, left-to-right, and requires a lofty pitch with a ton of spin just to keep it on the putting surface.

You will see birdies here when guys play it correctly, but that second shot is one that requires a player to be 100 percent confident in what he's doing or he will be scrambling for a par, and most likely making a bogey (or worse).

It's a 313-yard par-4 and it's an absolute monster, if those things aren't mutually exclusive.

It has doomed plenty of rounds for members over the decades, and plenty of U.S. Open runs, including Jim Furyk back in '07. It's so short that it teases players into wanting to hit driver, even if that isn't the smartest play. The problem is, I'm not sure what the best play is on that hole, and I'm not alone. Head professional Devin Gee told me that the more he plays the 17th, the less he knows what to do there, and says it gets harder each time he pegs it on the tee on this penultimate hole at Oakmont.

This week, Jordan Spieth said of the 17th, "I like driver right now. That right bunker, I hit from all different parts of it to all different pins and felt like if I hit the shot I'm capable of out of that bunker, then I was left with a birdie chance that would require two really solid shots from a layup and a really solid wedge just to get to that point.

"So it's been downwind. Downwind, I like that play getting it up near the green. Even though the left rough is brutal, you can still hit the green from it pending an average to good lie. If the wind changes and the tees are back, I think I'll lay up, but it's all going to depend on the conditions."

That's one man's opinion — one of the favorites this week — but plenty of guys will go the complete other way of Spieth and hit iron off the tee there in hopes of finding the short stuff and having a wedge in for a hopeful birdie. The problem with laying up is, even at its widest point, the fairway is just 28 yards from rough to rough, and it slopes hard from right to left, so you have to land that lay-up on the right side of the fairway and allow it to bound into the middle of the fairway. 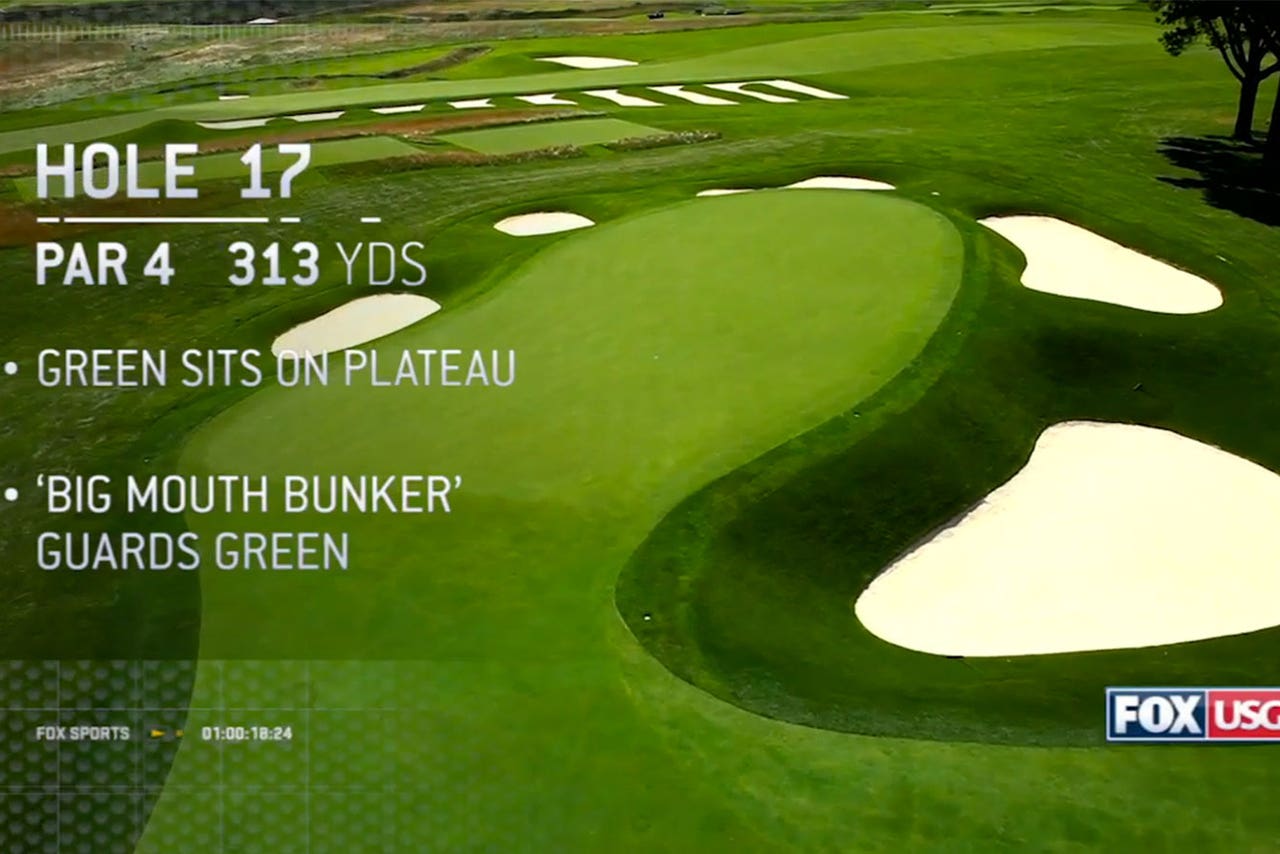 The short 17th will tempt players to hit driver off the tee, but a heavy sloping fairway and a ring of bunkers around the elevated green could make a mishit disastrous.

So basically, play it perfectly or make a bogey. And again, this is a 300-yard par-4. Oakmont, man. Oakmont.

I know, I know, this is cheating, but what the heck am I supposed to say about the hardest hole at the 2007 U.S. Open, which played to a stroke average of 4.6 the last time Oakmont hosted this championship?

The 18th was the third hardest hole on the PGA Tour in '07 behind Doral's closing hole and the nasty, nasty 18th at Carnoustie (side note: the 18th at Carnoustie is so tough I've literally had a nightmare about it, around five years ago, and I still think about that nightmare at times when I play holes that freak me out).

You close out your round with a 484-yard beast, where driver is needed but not always necessary. If you do pull driver, you have to squeeze it over a bunker that has a nose that sneaks out at 264 (a tough carry into the wind for a lot of players) and short of a bunker down the left side that comes into play around 286 yards.

The ditch that can swallow up golf balls and plays as basically a hazard this week runs just left of the fairway for players laying up, so anything pulled for a right-hander is basically a drop and a big number.

Not only is the fairway hard to hit, but it slopes hard left to right, meaning even good tee shots can run out into the right rough (Tiger Woods, needing a birdie on the 72nd hole here in '07 hit a driver he thought was perfect, concluded with a club twirl and all that old Tiger tour sauce, only to sneak up against the rough collar, leaving him an awkward lie for his second).

Your second shot is uphill to a green that slopes from back to front, and has different levels and undulations that mean you not only have to hit the green, but hit the right level to have a legit birdie putt. 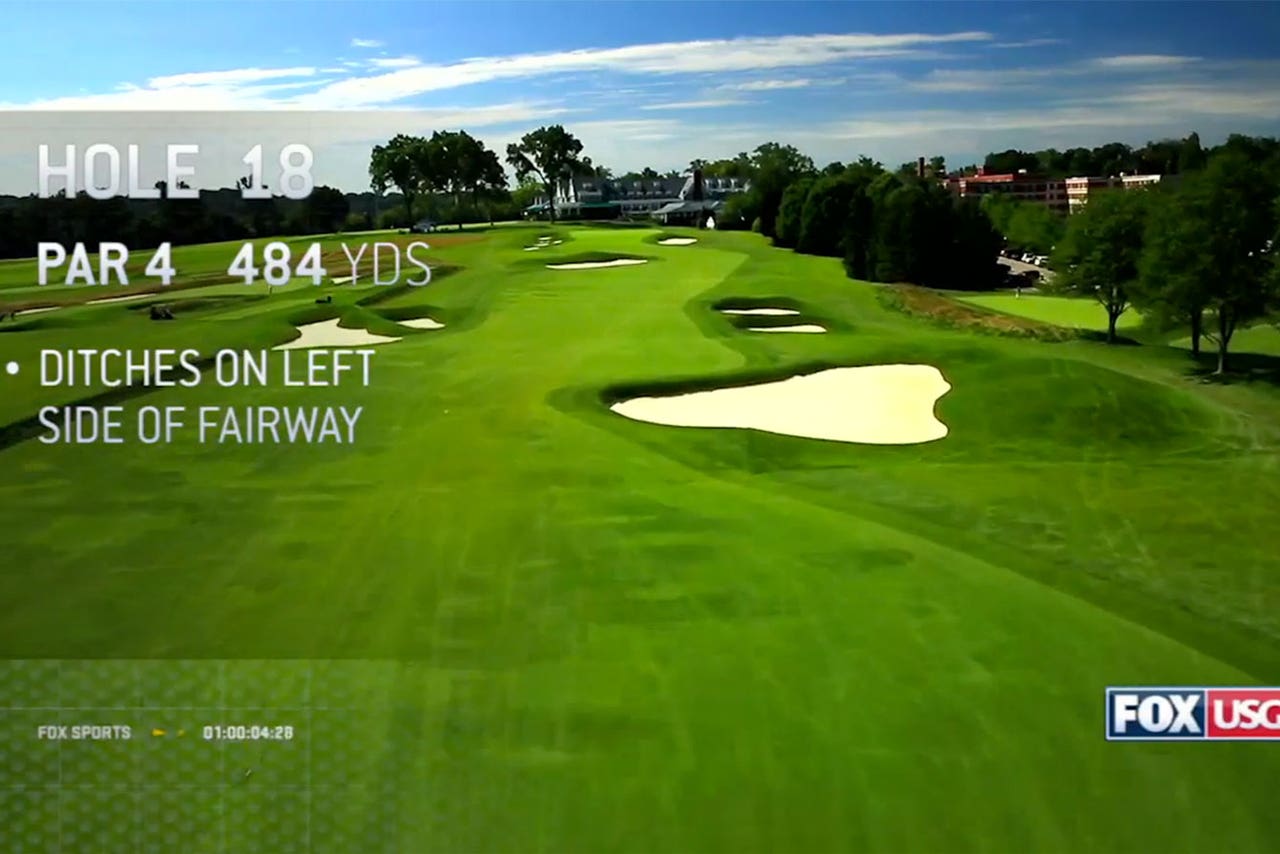 Off the 18th tee, players must be wary of a long ditch on the left side of the fairway and a smartly positioned bunker at right that can be tough to carry.

If you're on the wrong level, a two-putt is a heroic effort in golf terms, and more players will putt balls from the back of the green off the front of the putting surface than hole them if the hole location is up near the front.

Balls short can roll back off the green to a collection area some 20 yards away, meaning now players have to get it up and down to save par.