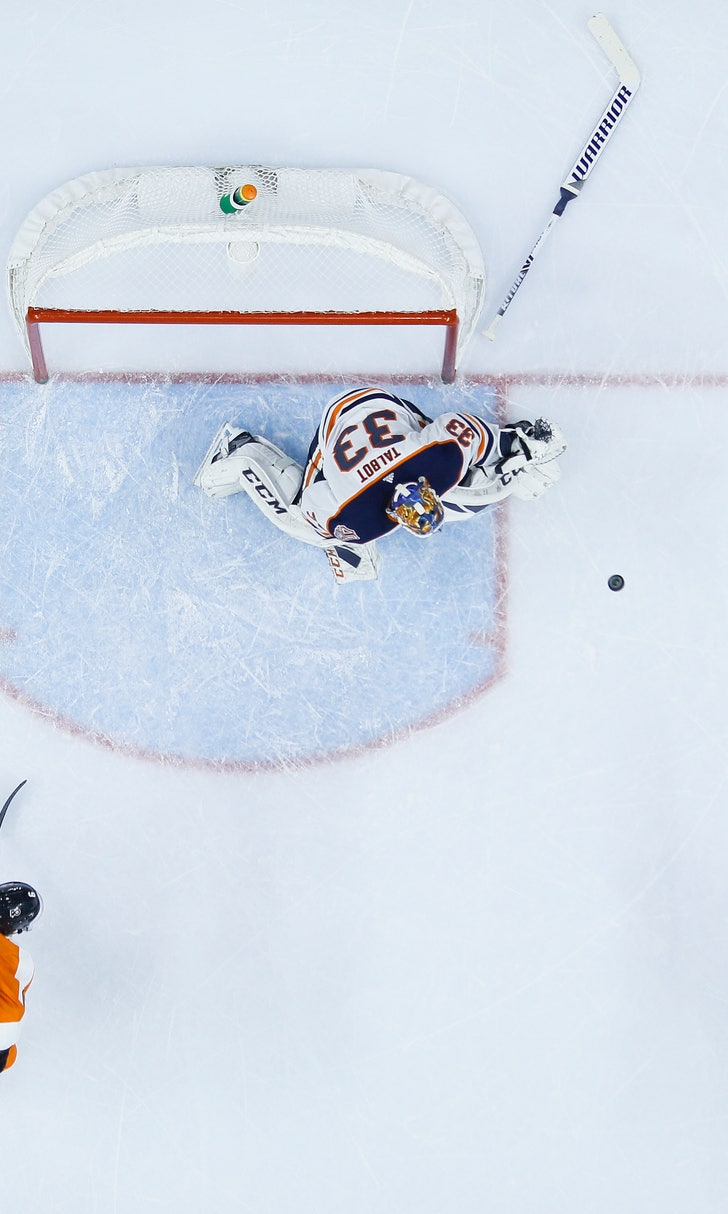 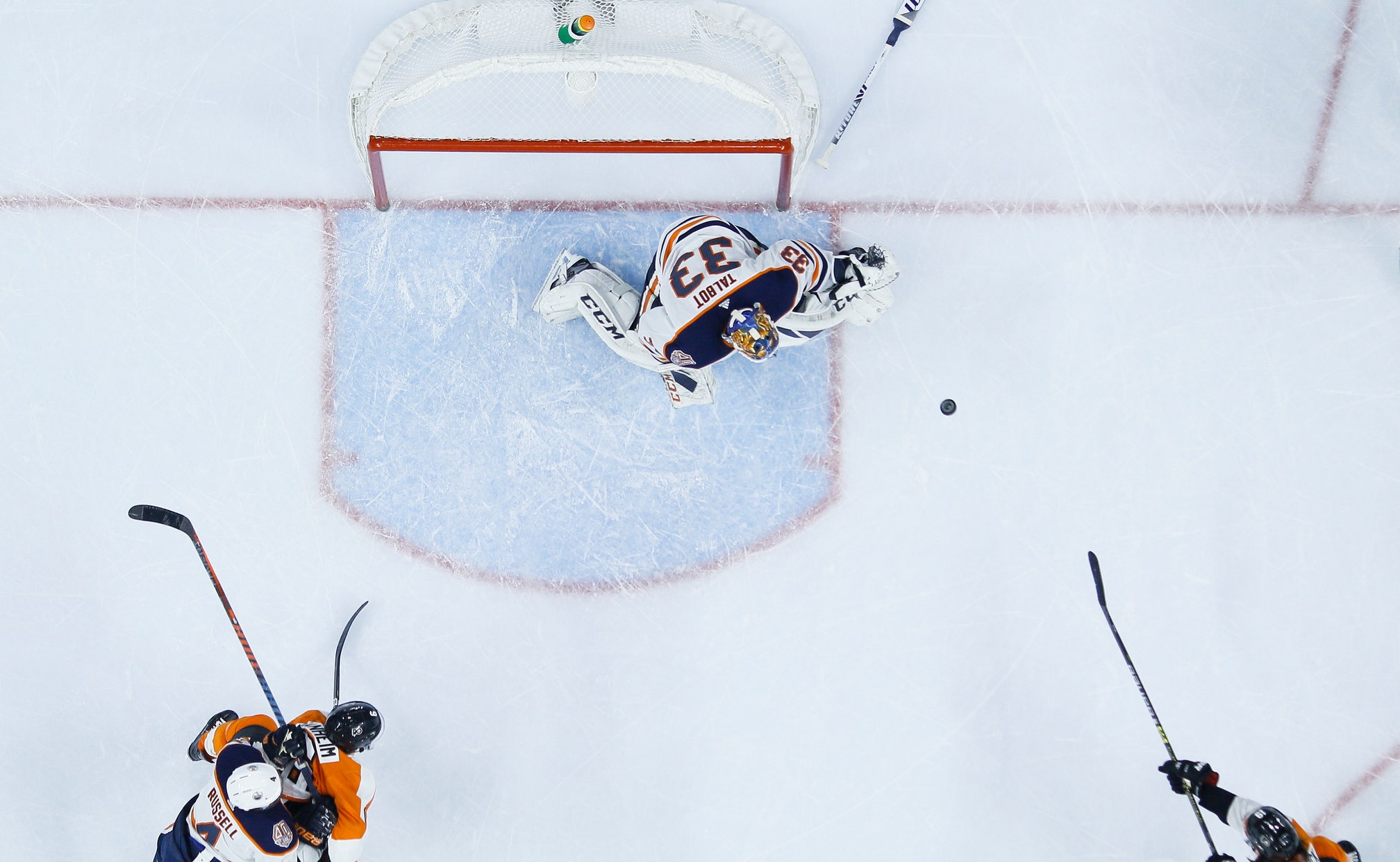 PHILADELPHIA (AP) — Nolan Patrick scored 2:01 into overtime and the Philadelphia Flyers rallied past the Edmonton Oilers 5-4 on Saturday, extending their winning streak to a season-best seven games.

Patrick won it on the third opportunity by his line in OT after Edmonton goalie Cam Talbot made big saves on Travis Sanheim and James van Riemsdyk.

Travis Konecny and Claude Giroux scored in the third to pull Philadelphia even. Sean Couturier also scored, and Carter Hart made 40 saves.

MONTREAL (AP) — Nico Hischier scored at 1:56 of overtime after tying it midway through the third period in New Jersey's victory over Montreal.

Jesperi Kotkaniemi and Phillip Danault scored for Montreal, playing its first game in 10 days. Antti Niemi made 24 saves, with Carey Price serving a one-game suspension for declining an invitation to the All-Star Game.

WINNIPEG, Manitoba (AP) — Jack Roslovic had his first career hat trick and Winnipeg scored a franchise-record six goals in the first period in the rout of Anaheim.

Roslovic had three power-play goals and an assist. Bryan Little scored twice and had one assist. Andrew Copp, Blake Wheeler, Brendan Lemieux and Tyler Myers also had goals for Winnipeg, which has won three straight and seven consecutive games at home. Connor Hellebuyck made 26 saves for the Jets and was credited with an assist.

Nick Ritchie, Daniel Sprong and Devin Shore scored for the Ducks, who lost their third straight in the first game of a five-game trip.

John Gibson stopped eight of the 14 shots before being pulled. Chad Johnson made 14 saves in relief.

TORONTO (AP) — Zach Hyman snapped a tie late in the second period and Garret Sparks made 28 saves to lead Toronto past Pittsburgh.

Auston Matthews also scored for Toronto, and Travis Dermott had a goal and an assist. Jake Gardiner added two assists.

Sidney Crosby and Teddy Blueger scored for Pittsburgh, which was without Evgeni Malkin for a second straight game because of an upper-body injury. Matt Murray stopped 30 shots.

Danny DeKeyser and Darren Helm scored for the Red Wings, who won their third straight and improved to 5-2-0 in their last seven games.

Craig Anderson made 19 saves for the Senators, who are mired in a four-game losing streak. Ottawa has lost its last two games since returning from a nine-day break.

COLUMBUS, Ohio (AP) — Vladimir Tarasenko had a goal and two assists as St. Louis returned from the All-Star break and a bye week to beat Columbus.

Ryan O'Reilly added a goal and an assist, Oskar Sundqvist also scored and Brayden Schenn had three assists for St. Louis. Rookie Jordan Binnington had 18 saves and improved to 6-1-1.

Oliver Bjorkstrand and Pierre-Luc Dubois scored and Artemi Panarin had two assists for the slumping Blue Jackets, who have dropped a season worst five in a row. Joonas Korpisalo had 29 saves.

Aleksander Barkov had a goal and an assist and Frank Vatrano also scored for the Panthers, who won for the fourth time in five games. James Reimer made 34 saves.

Vegas lost its fourth straight game for the first time in its short franchise history.

Casey Cizikas, Mathew Barzal and Brock Nelson also scored to help the Islanders stretch their point streak to eight games (6-0-2). Ryan Pulock had assists on each of the third-period goals and Robin Lehner stopped 34 shots.

Anze Kopitar had a goal and an assist, Ilya Kovalchuk also scored for Los Angeles. Jonathan Quick finished with 28 saves.

Yanni Gourde and Erik Cernak also scored to help the league-leading Lightning get their 39th win and become the first team to reach 80 points this season.

Mats Zuccarello and Kevin Hayes had goals for the Rangers, and Mika Zibanejad had two assists. Henrik Lundqvist finished with 20 saves as New York lost for the second time in three games since the All-Star break.

Tyler Seguin also scored for Dallas, which has won four straight. Radek Faksa and Esa Lindell each had two assists.

Calle Jarnkrok scored for Nashville, which had its three-game winning streak snapped.

ST. PAUL, Minn. (AP) — Erik Gustafsson scored his second goal of the game 1:19 into overtime to send Chicago past Minnesota.

Alex DeBrincat and Jonathan Toews also scored for Chicago, and Patrick Kane had an assist to extend his point streak to 11 games. Rookie goalie Connor Delia made 28 saves to help the Blackhawks win their fourth straight.

Jason Zucker opened the scoring for Minnesota, while Mikko Koivu and Victor Rask each had tying goals in the third to push the game to overtime. Alex Stalock stopped 27 shots for the Wild.

DENVER (AP) — Jake Virtanen and Antoine Roussel each had a goal and an assist as Vancouver raced to an early lead and defeated Colorado.

Brock Boeser, Nikolay Goldobin and Tyler Motte also scored for the Canucks. Jacob Markstrom had 34 saves as Vancouver moved to 4-1-2 in its last seven games.

The Canucks moved two points in front of Colorado in the Western Conference standings. The Avalanche have three wins in their last 20 games.

Joe Pavelski and Kevin Labanc scored goals less than a minute apart in the second period and Martin Jones made 31 saves to help San Jose move within four points of first-place Calgary in the Pacific Division.

Conor Garland and Josh Archibald scored for the Coyotes. Darcy Kuemper made 32 saves for Arizona to earn at least a point in his ninth straight start.