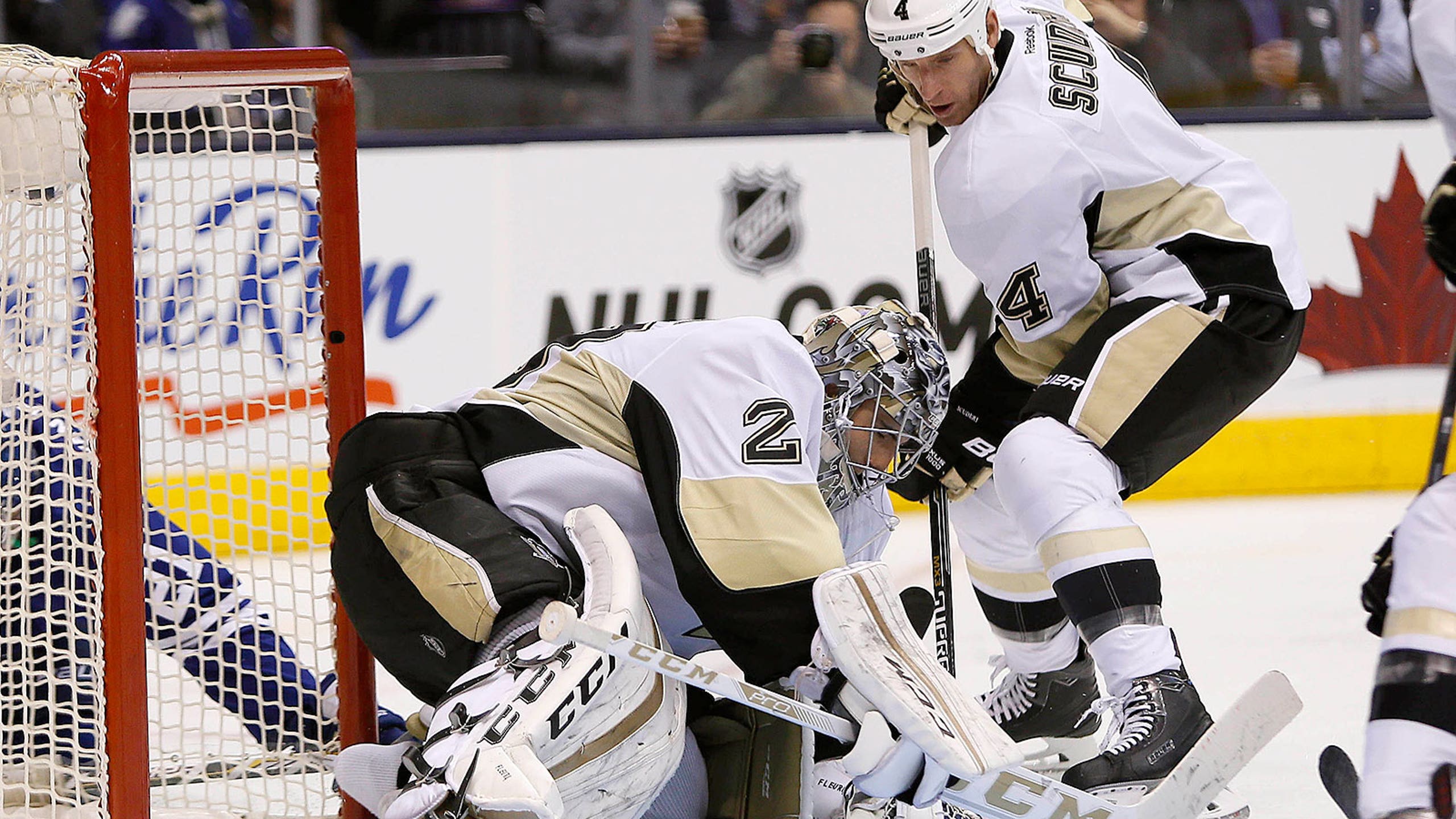 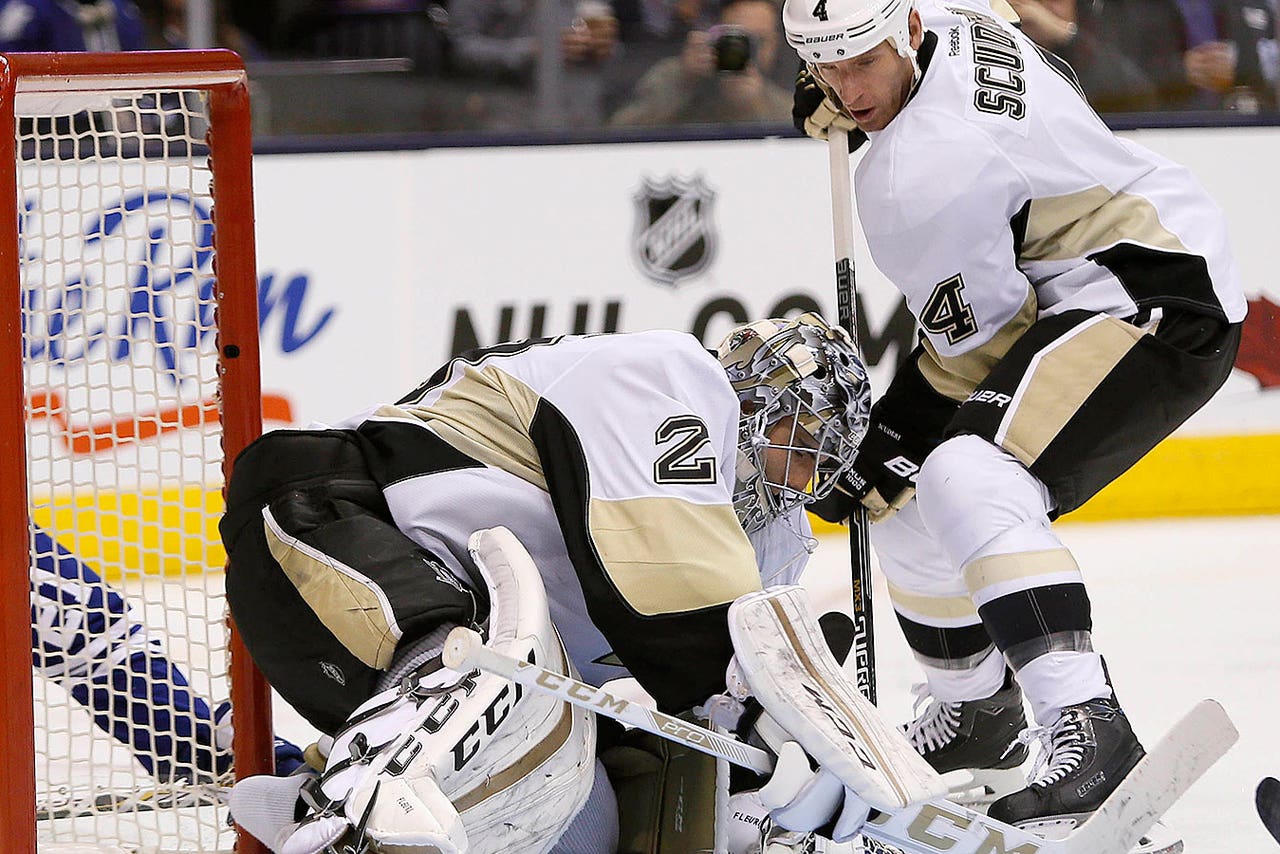 Fleury recorded his 40th career shutout and the Penguins beat the Toronto Maple Leafs 4-0 Saturday night for their fourth straight win in Kessel's first game back at the Air Canada Centre.

Toronto kept Kessel, Sidney Crosby and Evgeni Malkin off the scoresheet, but the Penguins stars had plenty of help in adding to the Leafs' early misery this season.

Chris Kunitz, Eric Fehr, Matt Cullen and Patric Hornqvist scored before a Halloween crowd of 19,197 that included Gumbie, Super Mario and Superman. Many left before the final whistle.

The Penguins outshot Toronto 32-21. Fleury picked up an assist on the Pens' fourth goal and improved his record against the Leafs to 18-9-3 with his first shutout against the club.

Pittsburgh is 7-1-0 since losing its first three games of the season.

"It was one of our better games in the past weeks," said Fleury. "From start to finish, our penalty kill, our power play looked good. I felt like our four lines contributed, did well. I felt pretty confident in tonight's game."

The Leafs are winless in six straight. Babcock delivered an emphatic news conference speech that lasted just 3 minutes, 30 seconds and was aimed at the Leafs locker room.

"Life's about responding to adversity, life's about doing things right," he said. "I believe we're a way better hockey club than that.

"I believe you have a responsibility as a good pro to bring it every day. And when adversity hits, you dig in a little bit harder and you stay with your structure and you stick with the program. I didn't think we gave our fans that tonight at all."

Kessel was booed whenever he touched the puck, with the volume increasing the longer he had it. Still, he was in good company on the ice, seeing power-play time with Crosby and Malkin.

Kessel had one shot in the first two periods and reminded the home fans that defense is not his thing. He ineffectively waved his stick at attackers during a second-period shift with the Penguins bottled up in their own end.

Kessel scored 181 goals and 395 points in 446 games for the Leafs. But he was dealt to Pittsburgh in July after president Brendan Shanahan said fans couldn't understand "people that go out and give half-efforts and that don't appear to enjoy playing here."

Pittsburgh opened the scoring seconds after Fleury made a good stop on a short-handed shot by Michael Grabner. On the ensuing rush, David Perron's shot trickled through Bernier's pads and Kunitz pounced, poking the puck over the line at 13:33.

"I didn't think we responded very well after that," Babcock said.

Winger Rich Clune, in his second outing for the Leafs, was assessed a 5-minute major for boarding with some 4 minutes remaining in the period as he sent Rob Scuderi flying into the boards. The penalty lasted more than double his 2:21 ice time in the period, but the Penguins -- who came into the game ranking 29th on the power play, above only Toronto -- did little with it.

Fehr, in his first game with Pittsburgh, scored short-handed at 2:34 of the second period. Jonathan Bernier made the initial save but failed to control the rebound and the former Capital got to it, tucking it in as the Penguins penalty was announced over the PA. He also had an assist on the night.

The Penguins rubbed salt in the wound at 4:31 of the third when a long shoot-in bounced off the back board and came right back in front to Hornqvist, who beat Bernier.

NOTES: Crosby and Malkin came into the game with a combined 36 goals, 64 assists and 100 points against the Leafs. ... It was the ninth time in 10 games this season that Toronto conceded the first goal. The Leafs are 1-7-1 in those games. ... It took 6:33 for the first shot of the night, with the Leafs doing the honors.