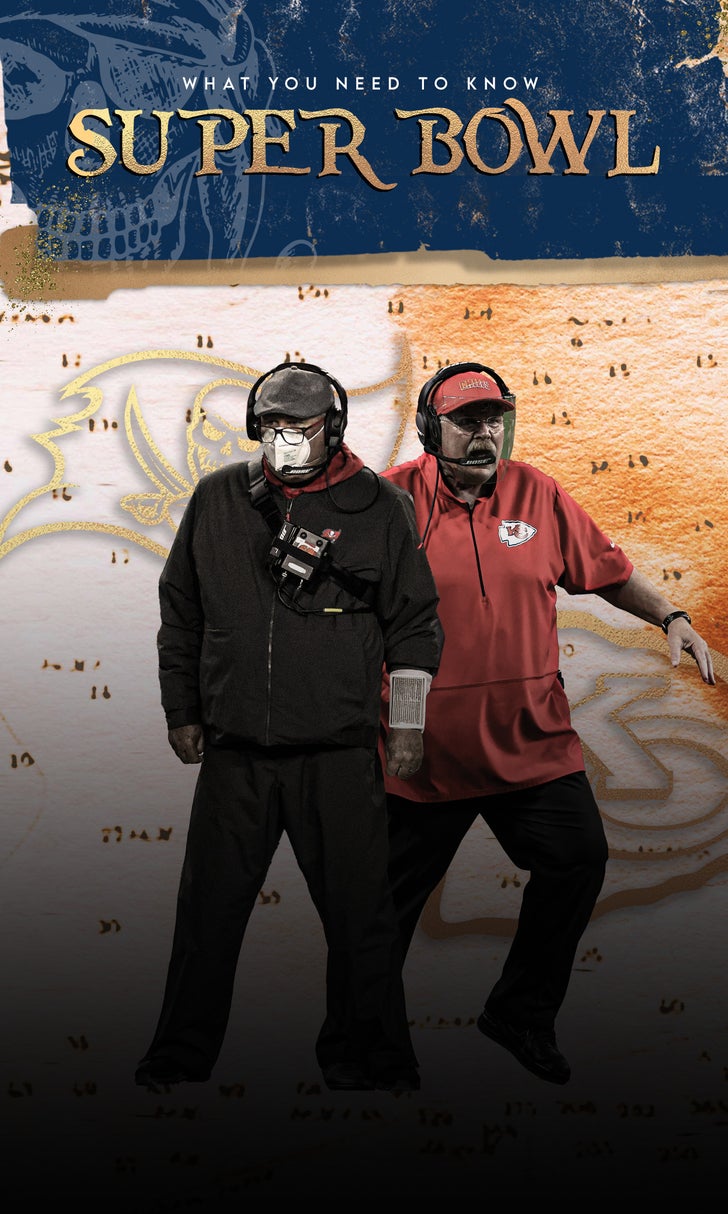 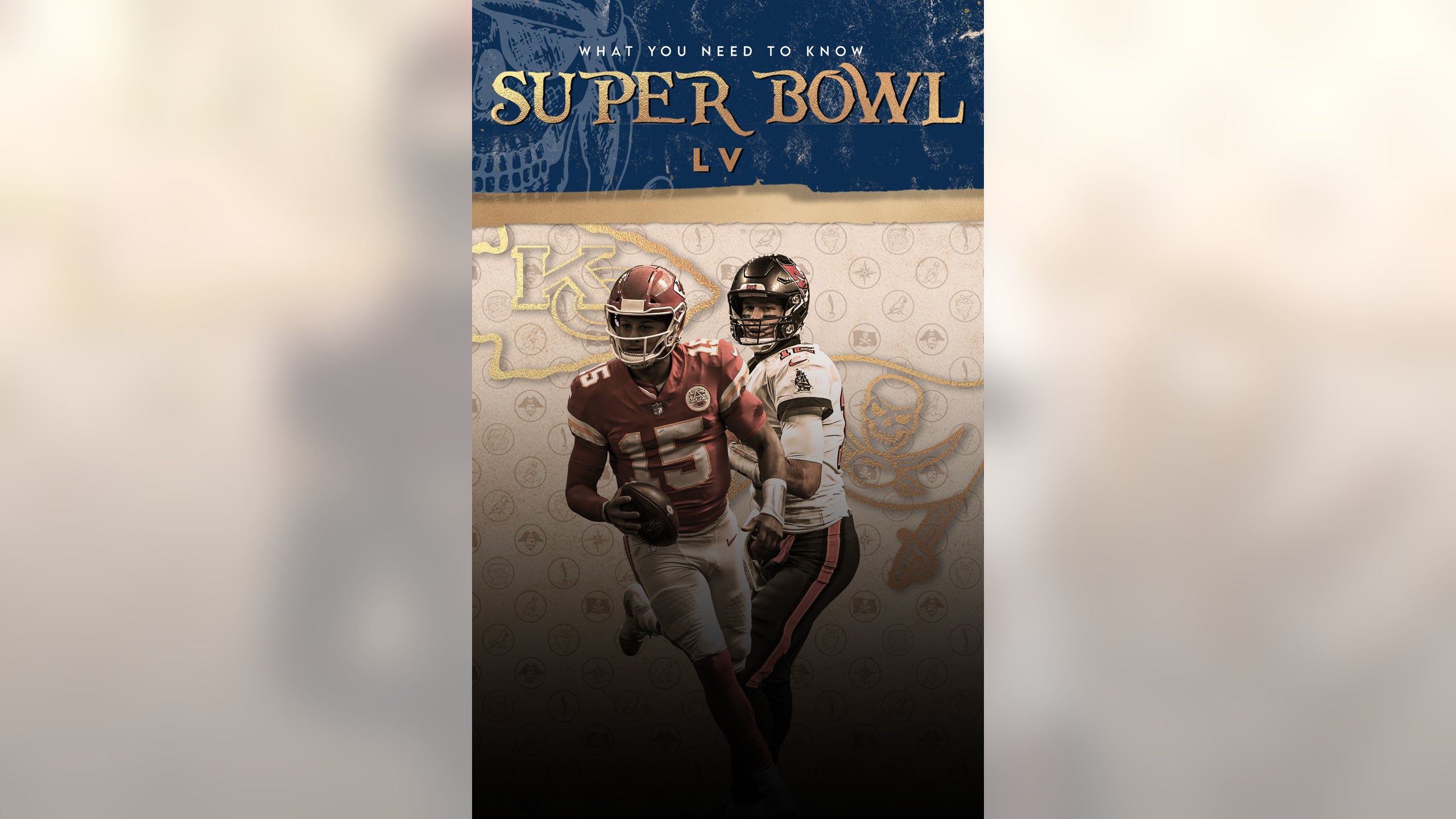 Super Bowl LV: Kickoff time, odds, and everything you need to know

Come Sunday night, either the Tampa Bay Buccaneers or the Kansas City Chiefs will be crowned winners of Super Bowl LV and champions of the National Football League.

Here's everything you need to know heading into Sunday's big game:

When does it start, and how can I watch the Super Bowl?

Tom Brady's Buccaneers will square off against Patrick Mahomes and the Chiefs at 6:30 p.m. ET on CBS. The game will also be available to stream on the NFL app, CBSSports.com, the CBS Sports App and CBS All Access. ESPN Deportes and the ESPN app will carry the game in Spanish.

Which team is the favorite?

The over/under for the Super Bowl is set at 56 points, per FOX Bet.

Those numbers have held fairly steady throughout the week, although the total over/under has come down from 56.5.

Where is this game being held?

Super Bowl LV will be held in Tampa, Florida, at Raymond James Stadium, home of the Buccaneers. The Bucs will be the first team in NFL history to play the Super Bowl on their home turf.

With two Super Bowls (XXXV in 2001 and XLIII 2009) and the 2016 College Football Playoff National Championship already to its name, Raymond James Stadium is no stranger to massive events. In addition to hosting Sunday's Super Bowl, the stadium will host WrestleMania 37 in April.

Whom did the Bucs and Chiefs beat to get here?

Kansas City, the defending Super Bowl champion, secured the AFC's No. 1 seed with a 14-2 record in the regular season. Mahomes & Co. took down the Cleveland Browns 22-17 in the divisional round before beating the Buffalo Bills 38-24 in the AFC Championship Game.

With a regular-season record of 11-5, the Buccaneers finished second in the NFC South to secure a wild-card spot. As a result, they took a more circuitous route to the championship, beating the Washington Football Team (31-23), New Orleans Saints (30-20) and Green Bay Packers (31-26) all on the road to earn a berth in the Super Bowl.

Are any records within reach this year?

Set to play in his 10th Super Bowl, Brady will extend his record of Super Bowl appearances the moment he takes the field. He can add a seventh ring with a win, which would give him two more than any other player in history and make him the only starting QB in NFL history to win a Super Bowl in each conference.

Brady can also pad his stats for a number of other records he holds, including attempts, completions, passing yards, touchdown passes ... you get the idea.

At 25 years old, Mahomes would become the youngest QB in NFL history to win two Super Bowls if he beats Brady; the Kansas City QB would supplant Brady, who won his second championship at age 26.

Sunday's clash will also mark the first time two QBs who have won both a league MVP and a Super Bowl MVP award will go head-to-head on the big stage.

As far as coaches go, Tampa Bay's Bruce Arians, at age 68, could be the oldest head coach in NFL history to win a Super Bowl. Currently, that record belongs to Brady's old boss, Bill Belichick, whose most recent championship with the New England Patriots came in Super Bowl LIII, when he was 66 years old.

Due to the pandemic, the hullabaloo in the week leading up to Sunday will largely take place virtually. The "Opening Night" event will be held Monday, with players and coaches taking a digital approach to media availability.

The Chiefs are planning to arrive in Florida on Saturday, a perk afforded to them because of the kibosh put on in-person interviews.

Attendance will also be impacted by COVID-19 protocols, with an estimated 22,000 fans being allowed admittance to the stadium.

Even the commercials, which have just as much buzz as the game for some viewers, will be different this time around. A few marquee brands, including Coca-Cola, Pepsi and Budweiser, announced their decision to forgo their typical Super Bowl ad spots.

Some of the pageantry and familiarity will remain, however. Jazmine Sullivan and Eric Church are scheduled to sing the national anthem, and The Weeknd will be performing this year's halftime show.

Whom do I need to know other than Brady and Mahomes?

While the two QBs are undoubtedly the main attractions, both have ample weapons at their disposal on offense.

Mahomes has one of the game's best tight ends in Travis Kelce and a speed demon at WR in Tyreek Hill.

Brady's riding with a receiving corps that boasts Chris Godwin and Mike Evans on the outside and familiar Brady safety valve Rob Gronkowski at tight end.

Defensively, Chris Jones anchors the Chiefs on the defensive line, and jack-of-all-trades defensive back Tyrann Mathieu is a menace for Brady to contend with in the secondary.

For Tampa Bay, keep an eye on sack artists Jason Pierre-Paul and Shaquil Barrett at the defensive end positions, along with linebacker Lavonte David. If Mahomes tests Sean Murphy-Bunting, he does so at his own risk, as the cornerback has three interceptions in three playoff games.

Are there any other fun bets?

Heck yeah, it's the Super Bowl!

The two quarterbacks are the front-runners for MVP, with Mahomes at -118 and Brady +187, according to FOX Bet's insights. Hill (+1400) and Kelce (+1400) lead among Chiefs not named Mahomes, and Leonard Fournette (+2500) and Evans (+3300) round out the favorites among the Buccaneers contingent.

For the more adventurous, a whole host of additional prop bets — such as the coin toss result, the first scoring play of the game, defensive player props and more — is available at FOX Bet.

Mayfield Or The Field?
Colin Cowherd played another fun game this week called 'Baker Mayfield or the Field.'
17 hours ago