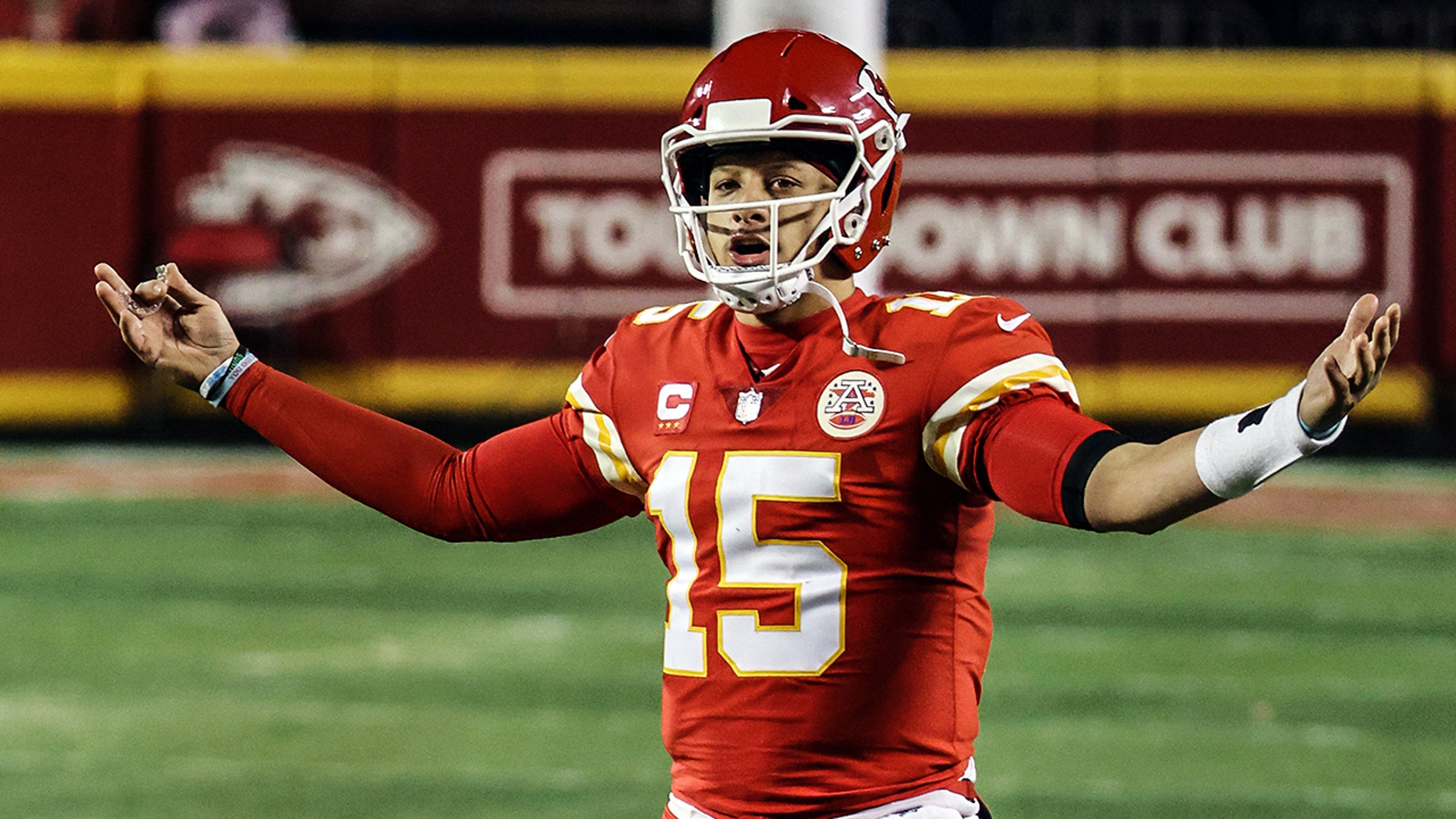 It's official: The GOAT and his apparent successor will meet with the Lombardi Trophy on the line.

After Tom Brady and the Tampa Bay Buccaneers went into Lambeau and knocked off the Green Bay Packers in a thrilling NFC Championship Game, Patrick Mahomes and the Kansas City Chiefs effectively took the suspense out of the AFC title game, defeating the Buffalo Bills 38-24.

In the process, K.C. earned its second consecutive Super Bowl berth and will look to become the first franchise to win back-to-back NFL titles since Brady's New England Patriots won Super Bowl XXXVIII in the 2003-04 season and Super Bowl XXXIX in the 2004-05 season.

Let's take a look at the major takeaways from Kansas City's dominant win:

A "walk in the park" would accurately describe Kansas City's day through the air, considering how its two superstar pass-catchers – both first-team All-Pro selections this season – had their way with the Buffalo secondary.

Kelce's second touchdown came at the midway point of the fourth quarter and gave the Chiefs a 38-15 lead, essentially sealing the Bills' fate.

In two games this postseason, Hill has 282 receiving yards on 17 total catches for an average of 16.6 yards per catch.

Kelce has a total of 227 yards through the air on 21 catches, with a total of three touchdowns.

Of course, Hill and Kelce catch passes from none other than reigning Super Bowl MVP Mahomes, who will have a chance to defend his individual crown after another masterful performance Sunday.

Mahomes completed 29 of 38 passes for 325 yards and added three touchdowns, thoroughly outplaying his Buffalo counterpart, Josh Allen, who was under pressure all night and completed 28 of 48 passes for 287 yards.

Allen threw two touchdowns and one interception and was sacked four times on the day. 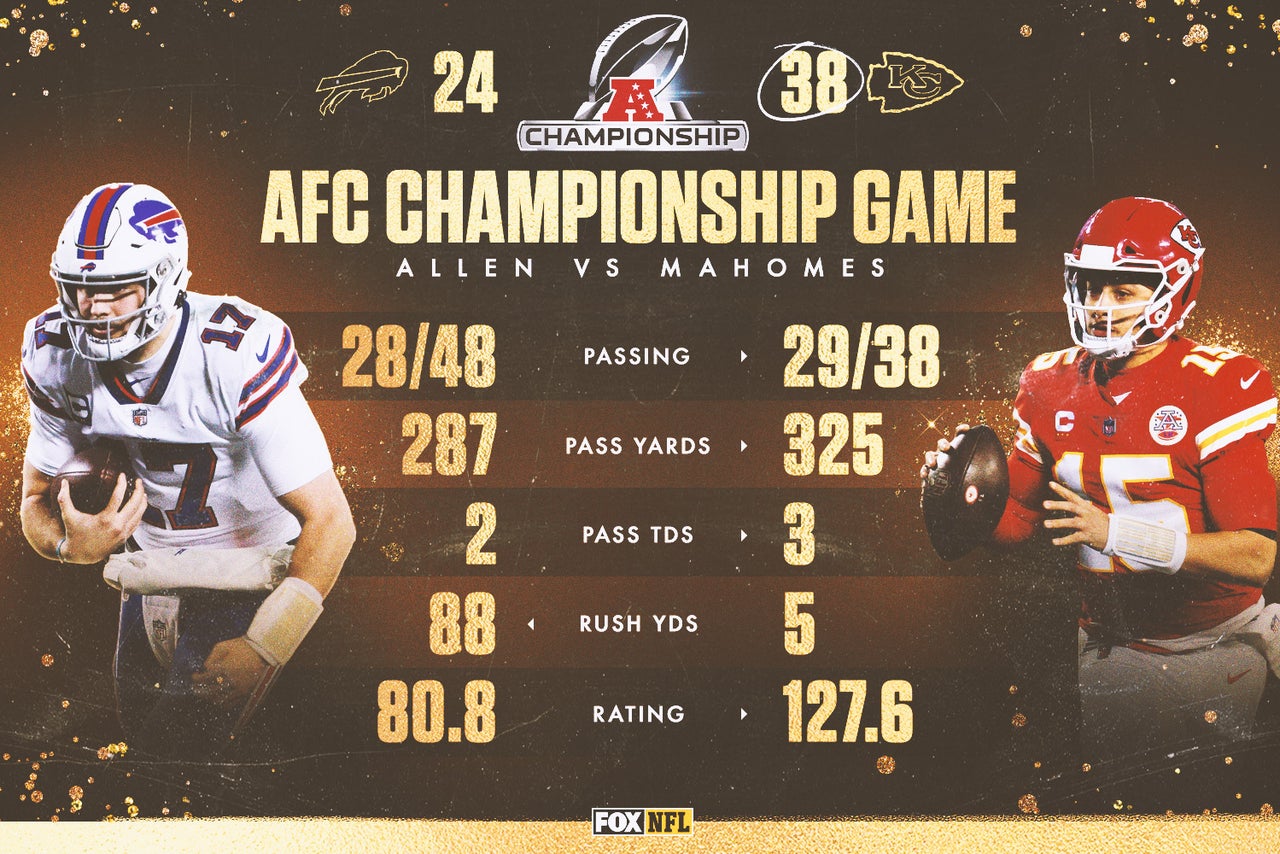 Mahomes showed no ill effects from an apparent head injury suffered last week against the Cleveland Browns, one that landed him in the NFL's concussion protocol in the week ahead of the AFC Championship and threatened his availability for the game early in the week.

They were aplenty for Buffalo.

The Chiefs and Bills each made five trips to the red zone on Sunday.

However, Kansas City scored touchdowns on all five of its trips, while Buffalo scored only two TDs, settling for a field goal twice and turning the ball over once.

After taking a 9-0 lead, Buffalo allowed Kansas City to score 21 unanswered. Then the Bills found themselves with first-and-goal at the K.C. 8-yard line with 33 seconds left in the first half.

However, the Bills weren't able to capitalize and settled for three points.

On their first possession of the second half, the Bills lined up for first-and-10 at the K.C. 15-yard line, trailing 24-12. Yet again, Buffalo was unable to find pay dirt and kicked a field goal.

On their next possession, with the Chiefs leading 31-15, the Bills moved the ball to the K.C. 20-yard line, but on second-and-10, Allen was intercepted by Rashad Fenton, and his team left the red zone scoreless.

Buffalo had its chances but just couldn't capitalize against the defending champs.

Just as both of Sunday's championship games were rematches from the regular season, the Super Bowl will serve as a Part 2.

And just as the Chiefs won their first matchup with the Bills (26-17 in Week 6 at Buffalo), Kansas City won on the road at Tampa Bay.

In Week 12, the Chiefs made their way to Raymond James Stadium and knocked off the Buccaneers 27-24, moving to 10-1 on the season at the time.

In that game, Mahomes put on arguably his best individual performance of the season, throwing for a season-high 462 yards, completing 75.5 percent of his passes and tossing three touchdowns.

Shockingly, however, Mahomes wasn't the star of the day. That title went to Hill.

Come Feb. 7 in Super Bowl LV, Tampa Bay presumably won't have much of an advantage playing at home.

The Prayer, Unanswered
In our Black History Month series, RJ Young looks at the career of Eldridge Dickey, the first Black QB selected in the first round of the draft.
14 hours ago