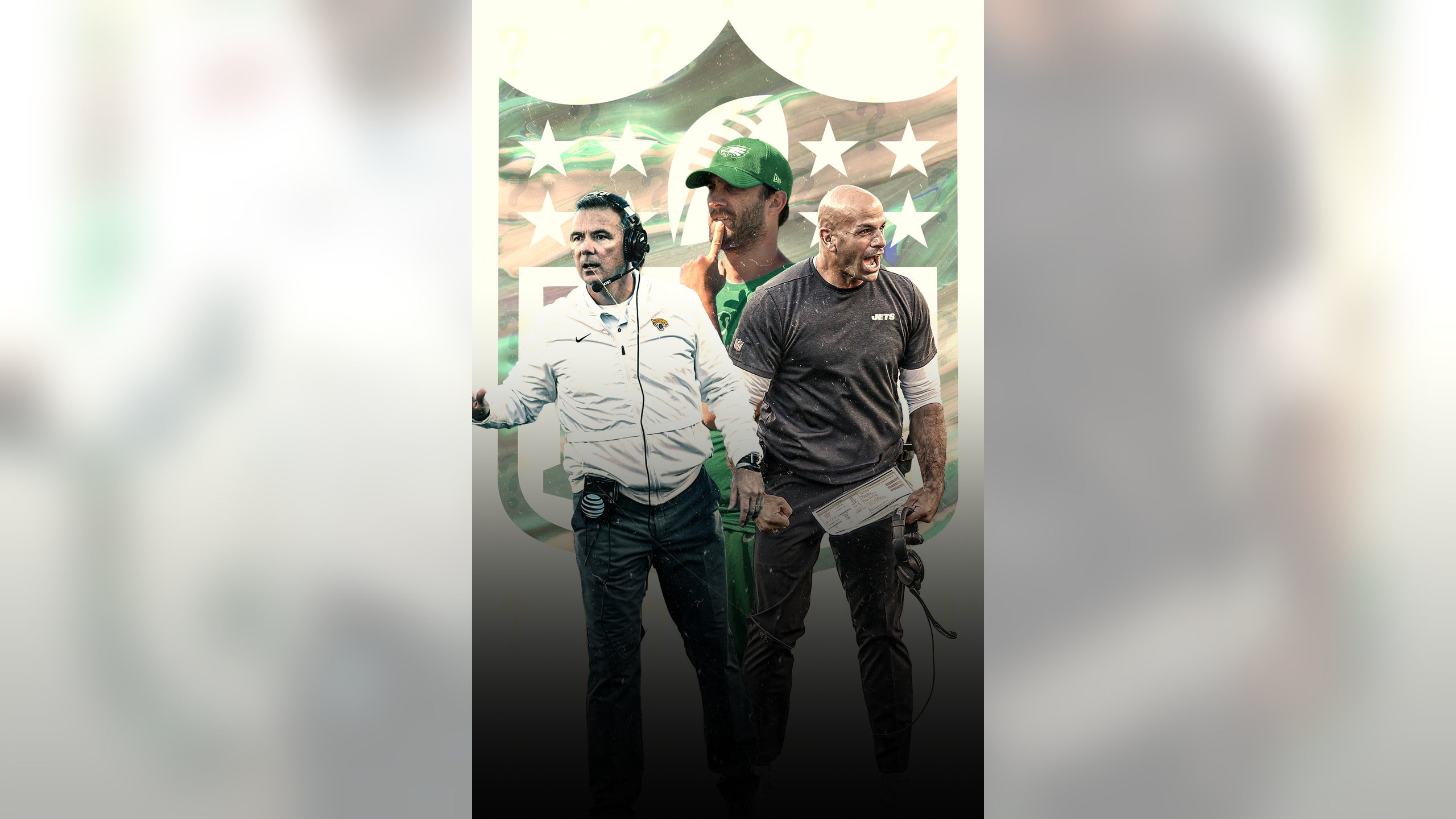 The seven head-coaching vacancies in the NFL have all been filled. Now it's time to get down to business.

With David Culley joining Houston as the last domino to fall, there will be new coaches calling the shots for the Atlanta Falcons, Detroit Lions, Houston Texans, Jacksonville Jaguars, Los Angeles Chargers, New York Jets and Philadelphia Eagles next season.

What are the biggest questions these coaches face with their respective teams?

While there are plenty of issues to address ⁠— coaching changes don't usually occur when a team is humming ⁠— here are the most pertinent matters that each coach, along with his team's general manager, will need to address.

How do you fix this defense?

Although regarded as an offensive-minded hire, Smith has said his responsibilities extend beyond putting points on the board. That should be good news for Falcons fans, as they saw their team give up a league-high 4,697 passing yards in 2020.

The real heartbreak came in Atlanta's inability to hang on to big leads throughout the season. The Falcons blew 15-plus-point leads in three games this season, including back-to-back collapses against the Dallas Cowboys and Chicago Bears.

With the No. 4 overall pick in the NFL Draft, Smith and the Falcons have options.

Although they could eye a quarterback to eventually replace 35-year-old Matt Ryan, the likes of BYU's Zach Wilson or Ohio State's Justin Fields won't solve their defensive woes. Still, given a dreadful cap situation, Atlanta could move off of Ryan ⁠and/or other high⁠-priced veterans ⁠— such as wide receiver Julio Jones ⁠— with an eye toward the future and a young QB.

If the Falcons ride with their existing offensive talent, perhaps Smith and new GM Terry Fontenot could look to trade down in the draft to add a few more selections and pick up a defensive difference-maker later in the first round.

Can you bring Justin Herbert to the next level?

Of all of the new coaches, the 38-year-old Staley inherits arguably the most desirable quarterback situation. Herbert shattered multiple records in his rookie season, taking over the job in Week 2 and never looking back.

The Chargers' sixth overall pick in 2020 has all the makings of a franchise quarterback, but the 22-year-old has room to improve. That's where Staley comes in.

As the defensive coordinator of the Los Angeles Rams' top-ranked unit last season, Staley might not seem like the obvious hire when it comes to nurturing a quarterback. The new Chargers head coach acknowledged as much but said he considers himself an "offensive coach."

If Staley can bring the defensive oomph the Rams displayed last season and partner that with an emerging Herbert, the Chargers should be poised to make the leap to the playoffs after a 7-9 finish in 2020.

Where do you begin the rebuild?

The Lions have already made a massive splash ahead of the offseason's official start. Following Campbell's hiring, the team agreed to ship longtime quarterback Matthew Stafford to the Rams for Jared Goff and a bounty of draft picks.

Detroit will have to wait a year to see the bulk of its draft haul, as L.A. didn't have a 2021 first-rounder to part with. Instead, the Lions added first-round picks in the 2022 and 2023 drafts, along with a 2021 third-rounder and, of course, Goff ⁠— along with his contract.

Goff has shown flashes in his five years, but his inconsistency seemed to be the impetus for the Rams to show him the door. With the No. 7 pick in the draft at their disposal, the Lions could see if a quarterback they like falls to that spot. That would allow them to develop the QB for a year while Goff gets a season to prove if a change of scenery can revitalize his career.

With questions on both the offensive and defensive sides of the ball, trading Stafford signals that Campbell and new GM Brad Holmes are content to build from the ground up.

Can you bring Deshaun Watson back into the fold?

Normally, with an elite QB in Watson, Houston's situation would be the dream scenario for an incoming coach. But there's one huge caveat: Watson wants out of Houston.

Early indications are that Culley's hiring hasn't done much to change Watson's mind.

Houston has said it has "zero interest" in trading Watson, who threw for a league-high 4,823 yards and a career-best 33 touchdowns this season.

Watson could bring in a king's ransom if the Texans find a trade partner, but that could prove difficult, given that Watson's desires are so publicly known. If Culley and new Texans GM Nick Caserio can somehow convince Watson to stay in Houston, the offseason will likely be deemed a success.

Who is your starting QB?

Very few in-season dramas matched what the Eagles did in 2020.

Franchise quarterback Carson Wentz had an awful season, seeing himself benched in favor of rookie Jalen Hurts. The season culminated in a controversial quarterback decision in a game against the Washington Football Team and in the firing of Doug Pederson a bit more than a week later.

The 39-year-old Sirianni will have to face the issue that Pederson couldn't adequately solve. In his introductory news conference, Sirianni said Philly had two "top-notch" quarterbacks, but he remained noncommittal beyond that.

For now, this looks like a question that will become a battle in training camp. Both quarterbacks fancy themselves as starters, but only one can win the job. Once Sirianni and the Eagles name a starter, the biggest question will become: What do they do with their unhappy backup?

What will you do with the No. 2 overall pick?

Despite a 2-14 finish in 2020, there's a sense of optimism around the Jets following the Saleh hiring. Although a pair of late-season wins all but blew the team's chance to draft Trevor Lawrence, the Jets have plenty of options at No. 2.

Sam Darnold's future hangs in the balance, as the Jets could look to move off of the 2018 No. 3 overall pick in favor of a rookie standout ... or perhaps a veteran looking to escape his current situation.

GM Joe Douglas has six selections in the top 98 of April's draft, including Nos. 2 and 23, along with a double helping of first-round picks in the 2022 draft. Combined with their other draft capital and perhaps Darnold as a reclamation project in Houston, the Jets might be able to secure Watson if they think he's worth it.

Or Saleh could see Darnold as a viable option, and New York could use its extensive draft assets to build the team around him. Nevertheless, the Jets have plenty of routes to choose from.

How will you spend your pile of free-agent money?

The consensus is that Lawrence is the surest thing to be the No. 1 overall pick since the Indianapolis Colts landed Andrew Luck in 2012.

Lawrence threw for 90 touchdowns and more than 10,000 yards in his three seasons at Clemson, finishing second in 2020 Heisman Trophy voting. It would be stunning if Meyer and new GM Trent Baalke went with anyone other than the QB.

The prospect of picking Lawrence had to factor into Meyer's decision to join the NFL coaching ranks for the first time in his career, which boasts three national championships at the collegiate level. Another perk? Jacksonville's considerable salary-cap space.

With a projected $74 million at their disposal, per OverTheCap.com, the Jaguars can flex their muscle in the free-agent market to great effect — or take on contracts via trade with little issue from a cap standpoint.

There are a lot of variables — such as franchise tags ⁠— to consider⁠ before the free-agent market crystallizes, but expect the Jags to be players when the frenzy begins.