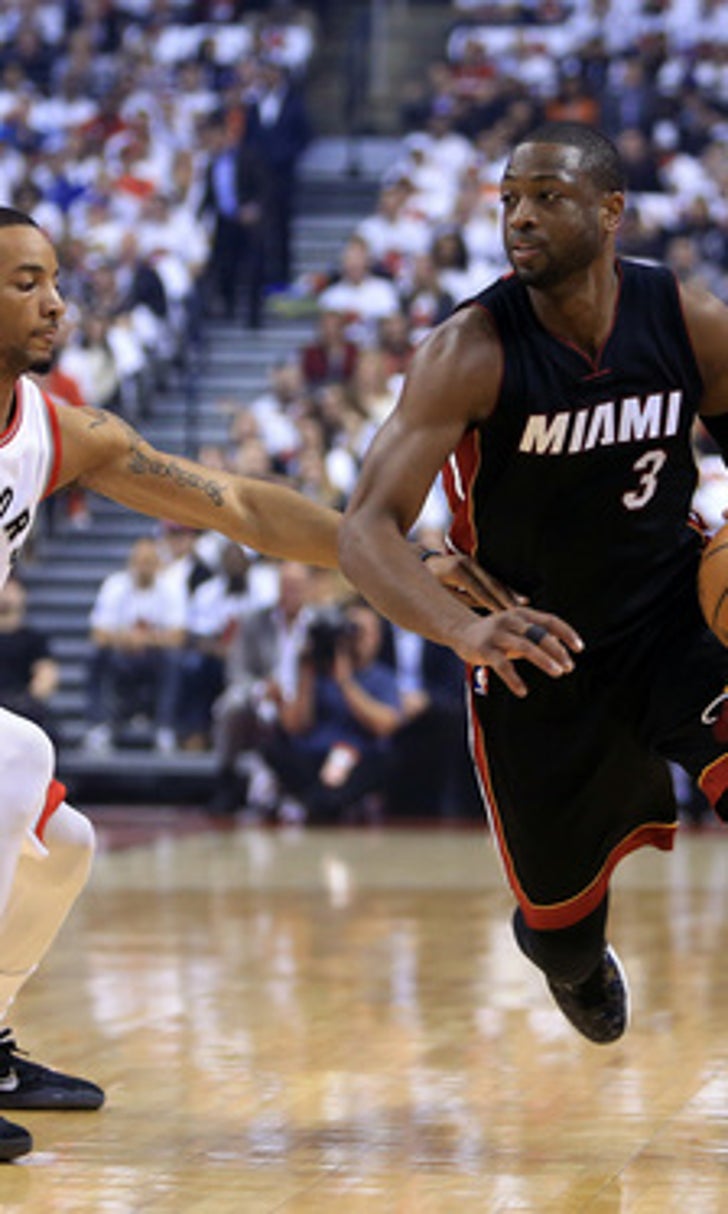 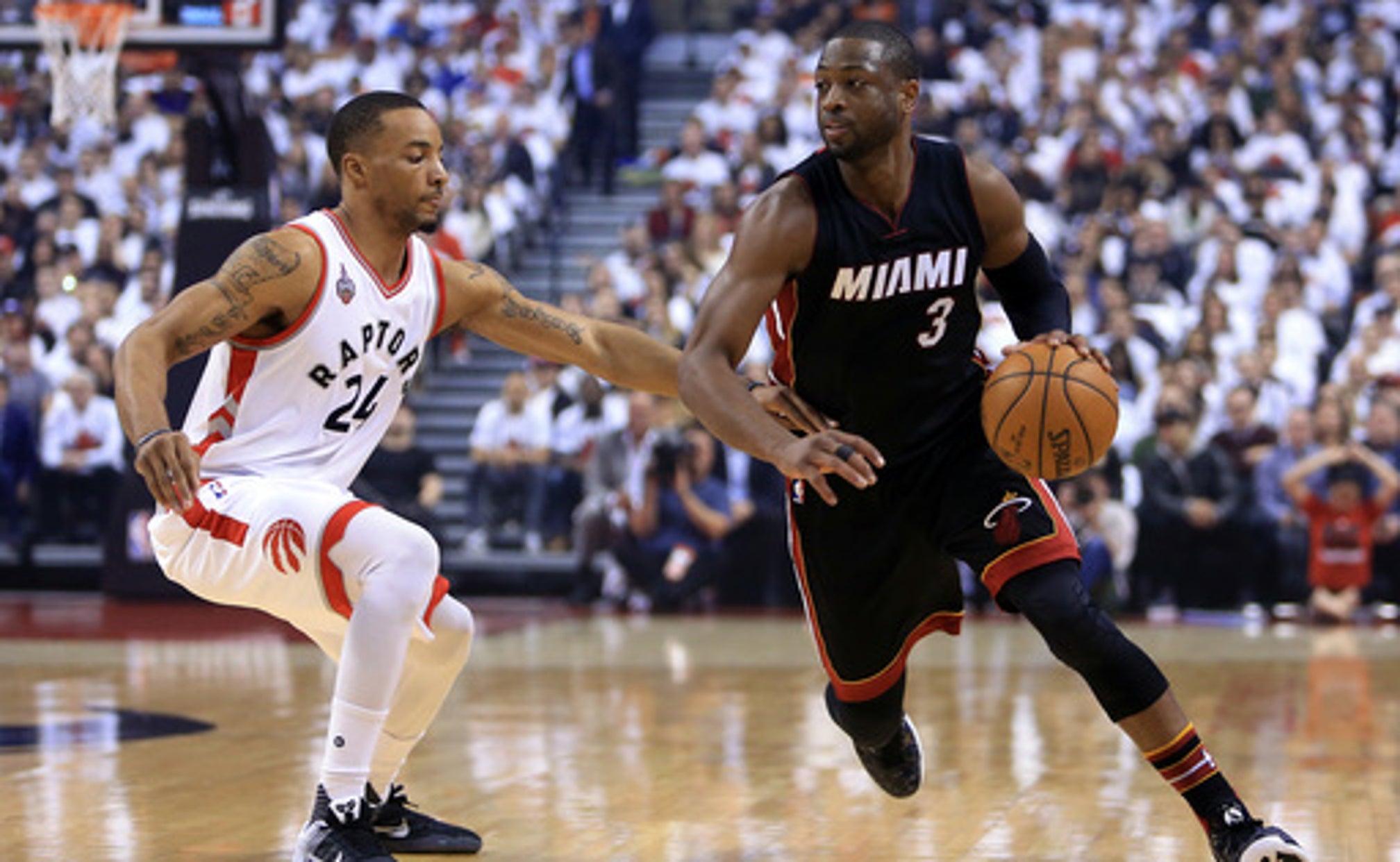 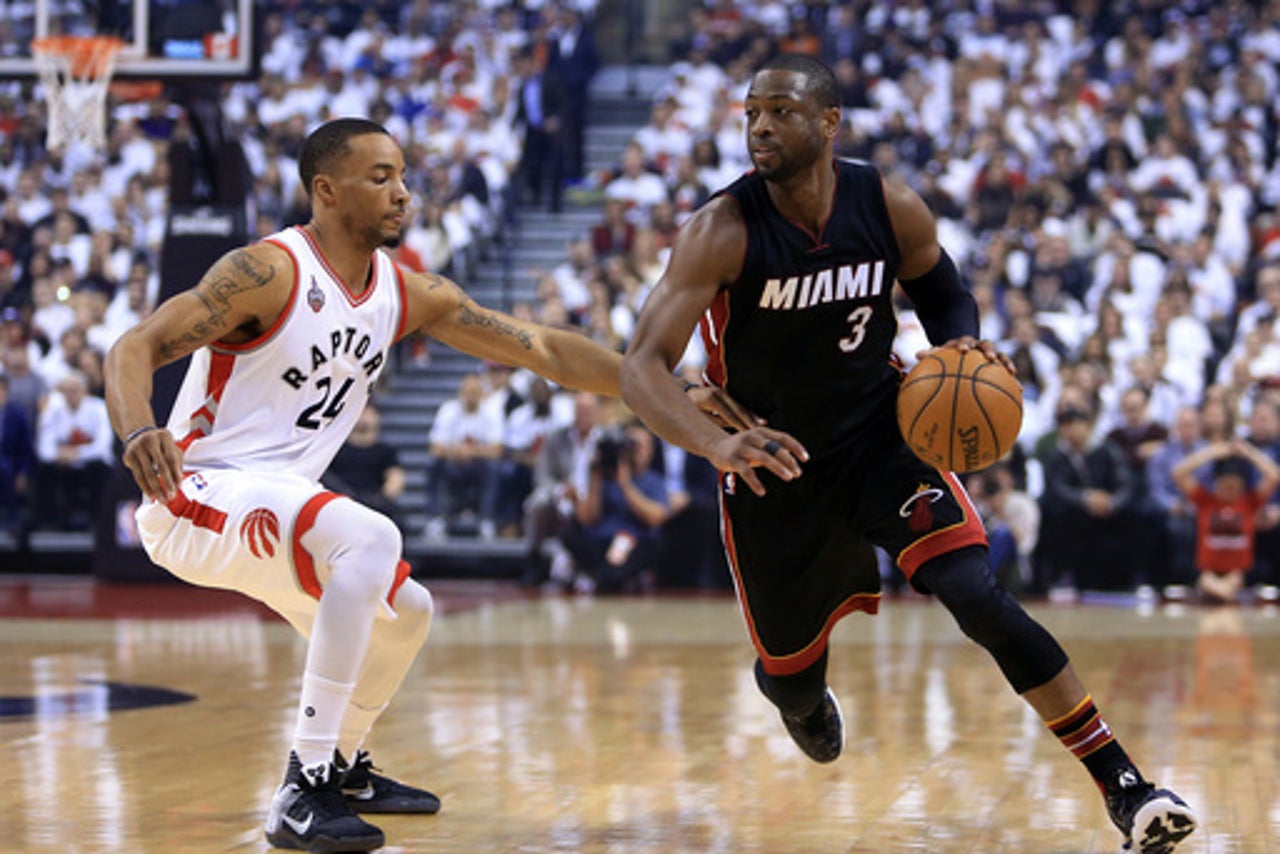 TORONTO (AP) It only counts as one win, though the Miami Heat had to work twice as hard to get it.

Goran Dragic scored 26 points, Dwyane Wade had seven of his 24 in overtime after Kyle Lowry's halfcourt shot tied it at the buzzer, and the Heat beat the Toronto Raptors 102-96 on Tuesday night in Game 1 of their Eastern Conference semifinal series.

''We had to win the game twice tonight,'' Wade said.

Joe Johnson scored 16 points and Josh Richardson had 11. Hassan Whiteside had 17 rebounds for the Heat.

Game 2 is Thursday night in Toronto.

Lowry's improbable 3-pointer from his own side of the halfcourt line capped Toronto's six-point comeback in the final 20 seconds of regulation, but the Raptors couldn't deliver in the extra session. Toronto went scoreless for the first 3:46 of overtime before DeMar DeRozan hit a jumper.

Dunks by DeMarre Carroll and Jonas Valanciunas made it 99-96 with just over 10 seconds to play. Toronto got the ball back after a Miami turnover on the inbounds play, but Wade stripped the ball from DeRozan and sealed it with a three-point play.

''D-Wade did a great job of reading the play and jumping toward the ball, trying to take the ball away from me,'' DeRozan said.

Valanciunas had 24 points and 14 rebounds, and DeRozan added 22 points for the Raptors, who dropped to 1-9 in the opening game of a postseason series. Five of those defeats have come at home.

''Game 1, you've got to be on point,'' Raptors coach Dwane Casey said. ''You can't have some of the mistakes that we made, turning it over. We'd get stops and lose it back, not rotate quick enough in some of the situations.''

DeRozan connected on his first three field goal attempts of the game, then made only six of 19 the rest of the way.

Lowry also struggled, going scoreless in the first half and finishing 3 of 13 for seven points. The All-Star guard headed to Toronto's practice gym on the upper level of Air Canada Centre to work on his shooting after the game.

''We know he's not shooting the ball well,'' Casey said. ''He's not making the shots that he normally makes. It's just like a hitter, hitters go through slumps. He's there.''

Wade saw the lighter side of Lowry's 8-for-50 performance from 3-point range in the playoffs so far.

''Sounds like me in the regular season,'' joked Wade, who didn't make a 3 from late December until Game 6 of Miami's first-round series against Charlotte. ''He's right on track to make some big 3s soon.''

Lowry then was given time and space by the Heat to let go his long-range attempt and it went through for his first made 3 in six attempts, sparking a wild celebration in front of the Toronto bench.

Wade went down clutching his right knee after the botched inbounds play that put Ross on the line, but stayed in.

Whiteside strained his right knee when he slipped and fell with 4:54 left in the first quarter. He limped to the bench and left for the locker room but returned at 9:01 of the second.

This was the second overtime playoff game in Raptors franchise history, and their second defeat. They lost 93-86 to Washington in Game 1 of the first round last season.

Heat: Miami had three 24-second violations in the opening quarter. ... The Heat outrebounded Toronto 52 to 41.

Raptors: Norman Powell started for first time since Game 1 of the opening round against Indiana. ... Ross scored 11 points in the second. ... Lowry missed his first five shots before making a pull-up jumper with 7:18 left in the third.

A Big Liability In Brooklyn
How do sportsbooks react to blockbuster trades? How much money is on the Nets? And is there any value? Sammy P asked the experts.
17 hours ago

Worthy of Attention
Zach LaVine is setting the league on fire. Is Chicago officially looking at its next superstar guard?
18 hours ago