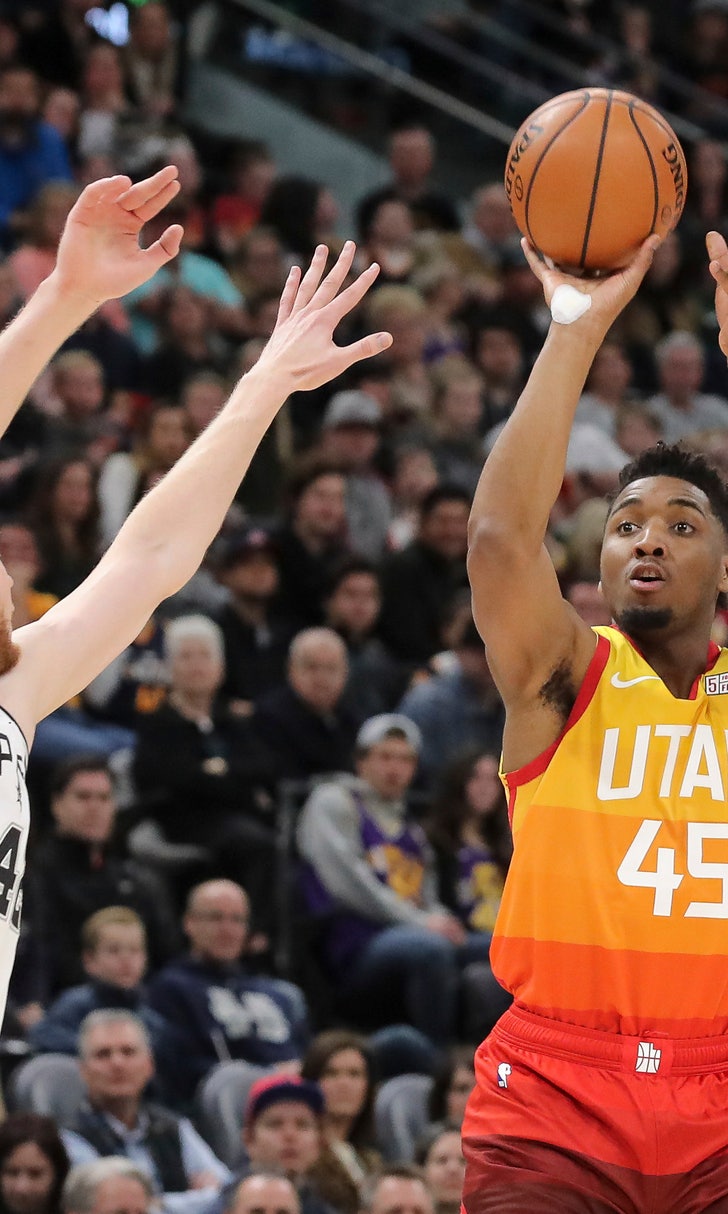 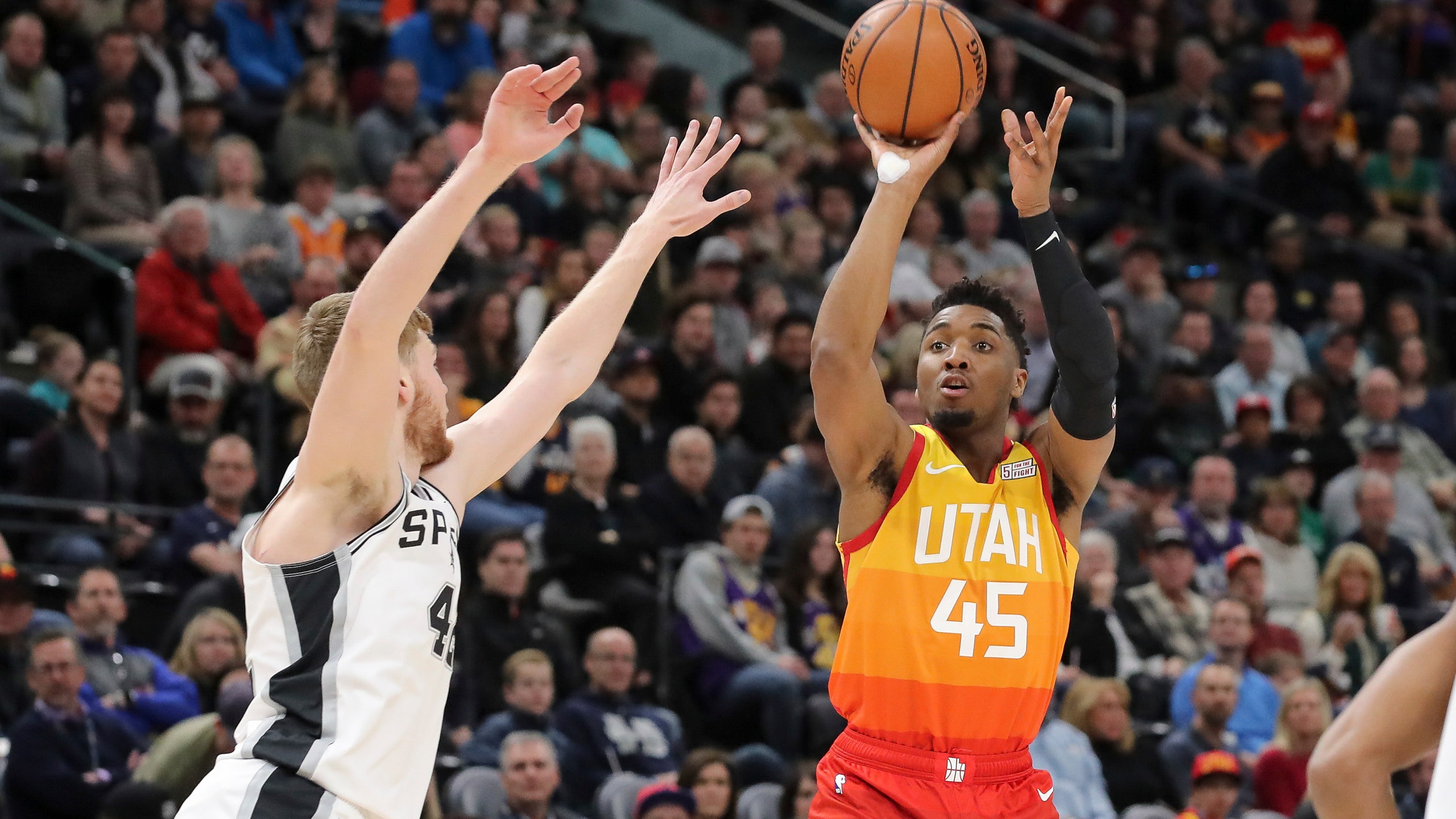 SALT LAKE CITY (AP) — When the Utah Jazz are executing their offense at home, it doesn't really matter what the defense throws at them.

Playing against a triangle-and-two and zone at times, Donovan Mitchell scored 23 points, Rudy Gobert had 21 points and 13 rebounds and the Jazz beat the San Antonio Spurs 125-105 on Saturday.

"I haven't seen that kind of defense since maybe one time in college and a couple times in high school," Mitchell said.

The Jazz shot 52.2 percent from the field and improved to 43-1 in their last 44 home games when making at least half their shots.

"We are moving the ball. We are putting a lot of pressure on the rim with our drives and the rolls, then we find the open guys, draw fouls or find the big man," said Gobert, who leads the league in field goal percentage at 65.3.

Royce O'Neale, who spent his first extended time at power forward, tied his season high with 17 points and made all four of his 3-point attempts to help the Jazz win for the third time in their last four games.

"We got easy shots," O'Neale said. "Once you see one go in, you get comfortable and you see another one go in, it feels good."

Ricky Rubio, who took to social media to celebrate surviving the trade deadline to stay with Utah, tallied 16 points, six rebounds, six assists and didn't turn the ball over. With the afternoon tip-off, his family in Spain watched the game at a more reasonable hour than the usual wee morning hours.

"I'm happy they could watch it and watch us win," Rubio said. "It was a little weird in the beginning with that defense that we're not used to, but once we read the defense, we got what what we wanted and got the lead."

DeMar DeRozan scored 23 points and LaMarcus Aldridge had 15 for the Spurs, who have lost four in a row on their eight-game trip while their home arena hosts a 17-day stock show and rodeo.

Their defense will need to improve if the Spurs want to end their skid on this road stretch.

"We got to stay in front of guys. It's our job as guards to stay in front of our man and not let that penetration get in and cause stress on our defense and let them get easy shots, easy layups, and put them on the free throw line. That's been a killer," DeRozan said.

Tied at 32, the Jazz scored nine consecutive points, including two baskets at the rim by Gobert, to gain command. The Jazz got to the basket repeatedly and outscored the Spurs 22-2 in the paint during the second quarter and led 62-48 at the half.

"We turned the ball over. We had poor execution. That killed us right there, especially on the road where teams take advantage of it (by) getting out in transition with the crowd behind them," DeRozan said about the second-quarter collapse.

This was the finale of the teams' three-game series. The Jazz own the tiebreaker and moved a full game ahead of the Spurs in the jumbled Western Conference standings.

Aldridge, who was chosen for the All-Star Game while Gobert was snubbed — prompting Jazz coach Quin Snyder to call for a different way of selecting participants — went 5 of 16 from the field and had 10 rebounds.

"I liked the way we played today. We came locked in from the beginning and there was no slippage," said Gobert, who has 45 double-doubles and is tied for the league lead with Joel Embiid.

This was Utah's third game making at least half their shots in the last four. The Jazz consistently found wide-open shooters against the Spurs' slow rotations and mismatched switches on pick-and-rolls.

"There's no time for sulking or anything like that. Utah played better than we did. They executed better. They made fewer mistakes over a 48-minute stretch and they won the game," San Antonio coach Gregg Popovich said.

"That's our identity," said reigning Defensive Player of the Year Rudy Gobert. "When we are all out there working and communicating with each other about the game plan, it's hard for us not to dominate defensively."

Though Gobert shrugged off his individual matchup against Aldridge and just complimented his opponent's skills, Mitchell said, "The Big Fella took that one personally. ... I love seeing that. We all did a great job giving him help but he didn't really need that much of it."

That will be the key to extending Utah's run up the standings. "We need to keep that same intensity on defense, like we had today. It starts with the Big Fella and leads to us, keeping the same poise and control."

Spurs: Rudy Gay missed the game with an ankle sprain. ... Jakob Poeltl started but fourth-quarter minutes went to Pau Gasol until the game was decided. ... The Spurs posted only four second-chance points as they were out-rebounded 52-36.

Jazz: Gobert got a technical foul in the first quarter after a series of non-calls. ... O'Neale, who averages 4.9 points per game, hit three 3s in the second quarter. ... Favors had his eighth double-double of the season with 11 points and 10 rebounds. The Jazz are 7-1 in those games.

The James Harden Experiment Is Working
James Harden appears to be both happy and motivated since his move to Brooklyn, and that’s scary for the rest of the NBA.
10 hours ago

'Club Shay Shay' Welcomes Rick Ross
"The Boss" Rick Ross stopped by "Club Shay Shay" to talk about the Miami Heat, his resemblance to James Harden and more.
12 hours ago

No Easy Explanation
Kyrie Irving is fighting an internal battle that has intrigued, inspired and infuriated NBA fans, Melissa Rohlin writes.
14 hours ago

The NBA's Most Devastating Injury
In recent years, Achilles tears have plagued some of the NBA's top players. Melissa Rohlin examines a painful trend.
1 day ago