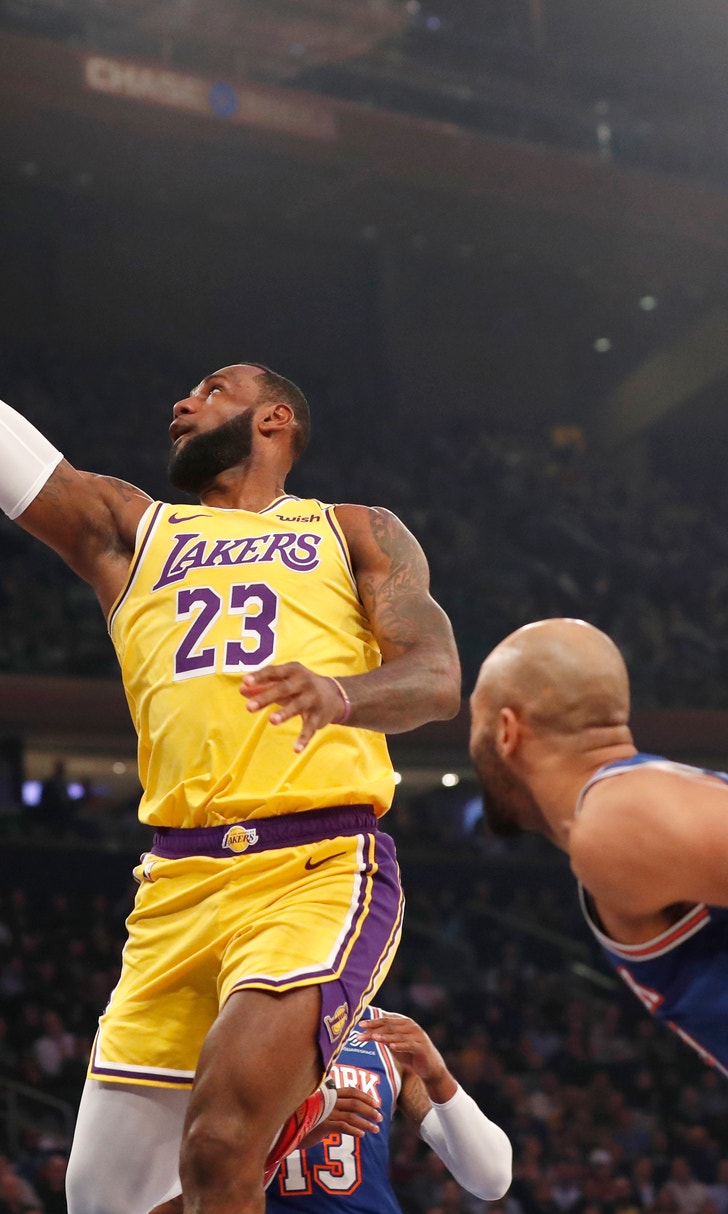 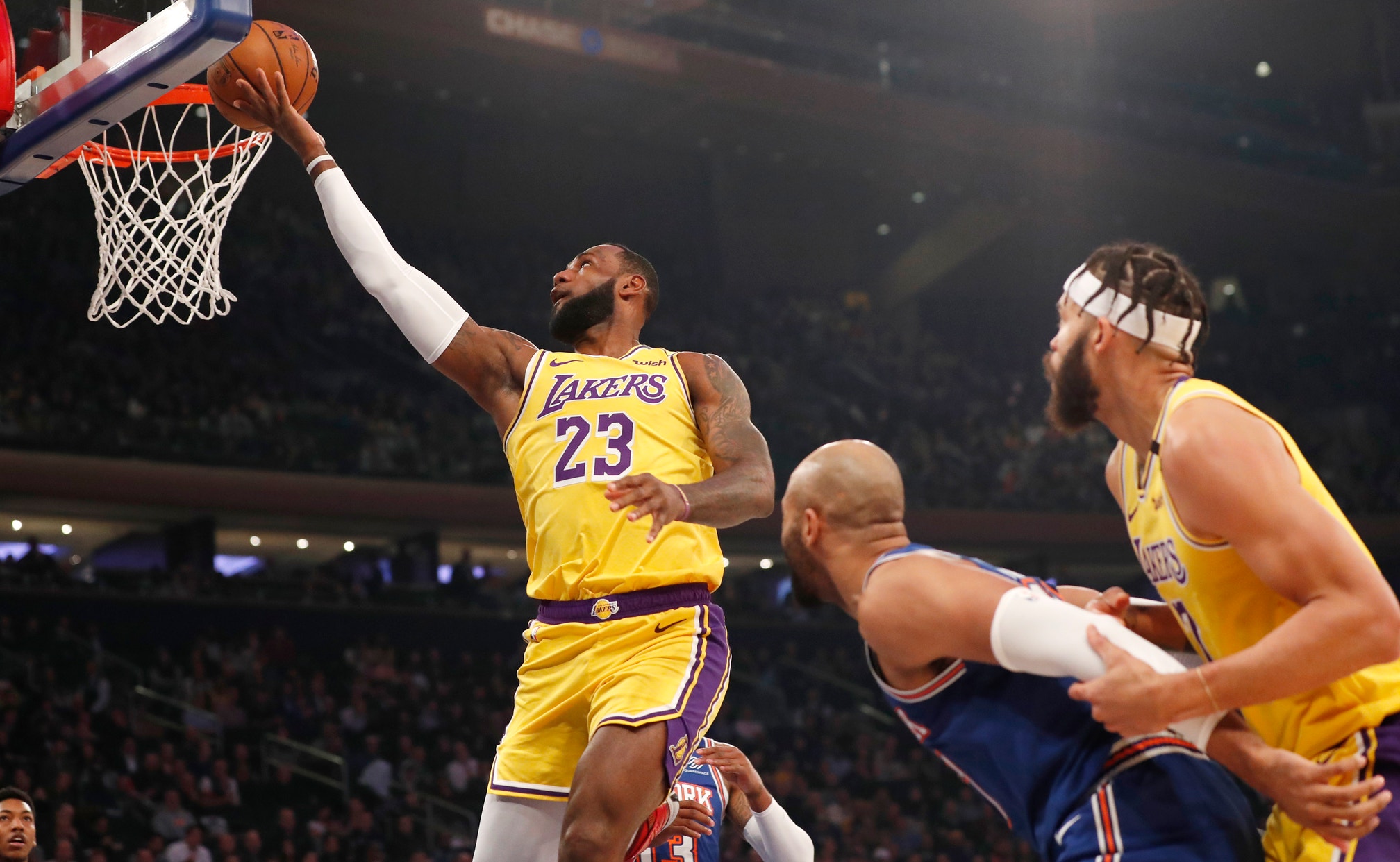 James closes on Kobe, Davis has 28 as Lakers beat Knicks

NEW YORK (AP) — LeBron James spent the first half showing why he will soon pass Kobe Bryant for third place on the NBA's career scoring list.

Then this season's assists leader put his own offense aside to help Anthony Davis find his.

James scored 19 of his 21 points before halftime to quickly cut into Bryant's shrinking lead over him for the No. 3 scoring spot in NBA history, and the Los Angeles Lakers beat the New York Knicks 100-92 on Wednesday night.

Davis led the Lakers with 28 points in his second game back after a five-game absence, after the Western Conference leaders were handed their worst loss of the season Monday in his return.

James took only six shots in a quiet second half but Davis scored 17 points after the break to help the Lakers pull away.

“I was more of a facilitator in the second half,” James said. “I wanted to get AD going. He looked a little out of rhythm in the first half. So it was a point of emphasis for me in the third quarter and the fourth quarter to get him going. And that was the difference."

James has 33,599 points, 44 back of Bryant. That leaves him in good shape to catch the former Lakers star Saturday at Philadelphia, where the five-time NBA champion was born. Los Angeles has a game in between Thursday in Brooklyn.

Davis scored eight points in the final 3:45 and finished 13 of 13 from the free throw line. He played 30 minutes after going only 23 in his return from a bruised gluteus maximus on Monday in Boston, where the Lakers were routed 139-107.

“Still getting my wind back. Just trying to find a rhythm again," Davis said. “I'm not trying to go out there and get my shots or force anything. Felt good tonight to get to the free throw line and see the ball go in the rim."

Marcus Morris scored 20 points and Damyean Dotson had 17 for the Knicks, who put up a much better effort after losing by 30 two weeks ago in Los Angeles. But they just couldn't come up with timely shots to really threaten the Lakers in the fourth quarter.

James shot 8 of 10 in 17 minutes of the first half, but the Knicks held the rest of the Lakers relatively in check and the game was tied at 48 at halftime.

The Lakers led by six after three quarters, then opened the fourth with Dwight Howard's dunk, a 3-pointer by Rajon Rondo and a basket by Kyle Kuzma to extend it to 83-70.

“In the first half we weren't making them uncomfortable enough or taking the fight to them enough," Lakers coach Frank Vogel said. “It was a tie score and we knew there was another gear we had to get to."

New York hung around and was within six again late but the Lakers prevailed despite only two baskets, both by Davis, in the final four minutes.

“I thought we got some pretty good looks at times, and just didn’t get them to go," Knicks interim coach Mike Miller said. “We went into it and wanted to play good basketball. I think we went in and played good basketball. We're not out trying to play close games or anything like that, but we took a shot and we came up a few points short."

Lakers: Kuzma had 10 points. ... Howard finished with 12 rebounds off the bench.

LEBRON AT THE LINE

James came into the game averaging 5.5 free throw attempts, which would be a career low and about 2 1/2 per game below his career average. Vogel isn't sure why there's been a reduction because he said James is still aggressively attacking the basket.

“We send clips in all the time to the league office, so I don’t know why he’s not getting calls," Vogel said.

Knicks guard Dennis Smith Jr. returned after missing 13 games with a strained left oblique. He entered in the third quarter and was scoreless in four minutes, missing both shots.

LaVar's Last Laugh
There was a method to the madness with LaVar Ball's efforts to get his three sons to the NBA. Does he deserve the credit?
1 hour ago

Here I Am: Skip Bayless' Story
In an emotional, revealing essay, Skip shares the people, places and events that made him the man he is today.
3 hours ago

AD Deal Reminds Us Of Lakers' Dominance
Anthony Davis’ new contract was expected and is a reminder that the Lakers are the focus of everyone else’s ambition, Martin Rogers writes.
22 hours ago

Face(s) of the Franchise
LeBron James and Anthony Davis have taken their friendship and turned it into a potential dynasty in LA, writes Melissa Rohlin.
23 hours ago