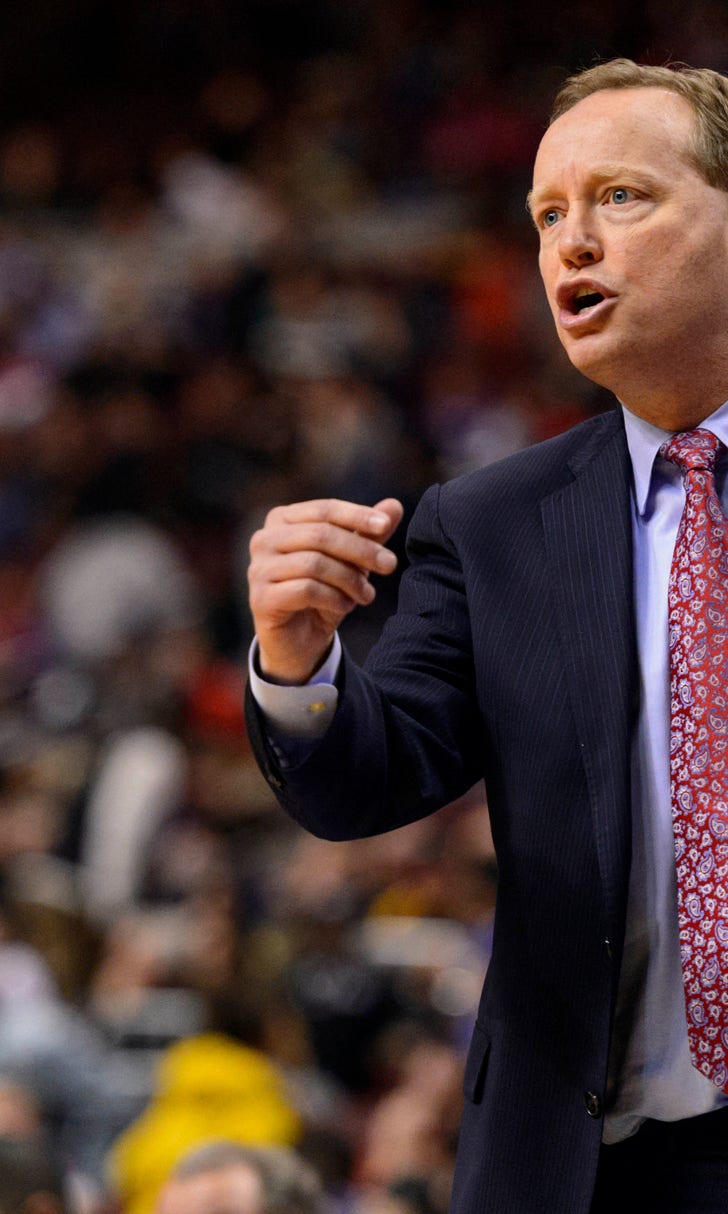 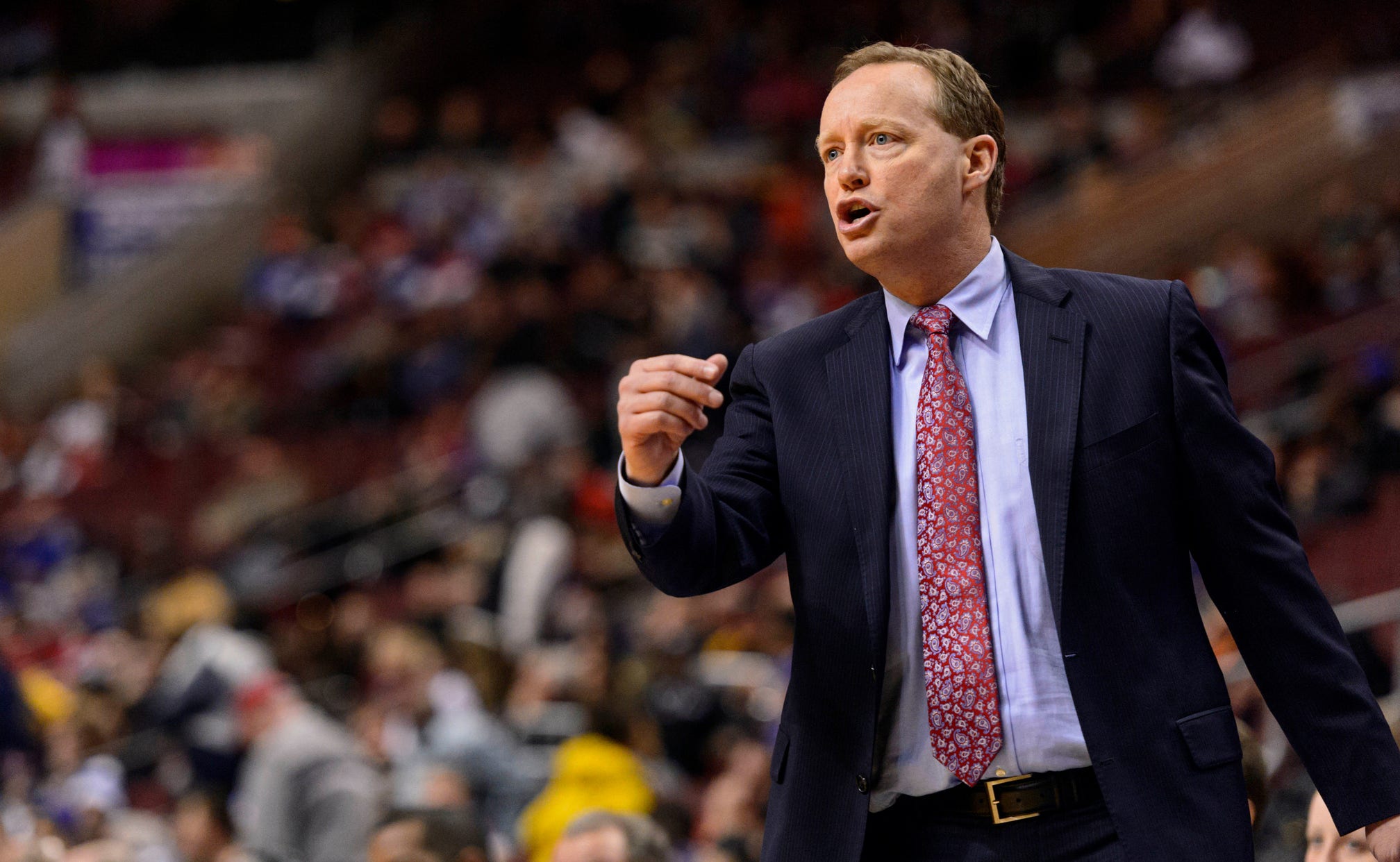 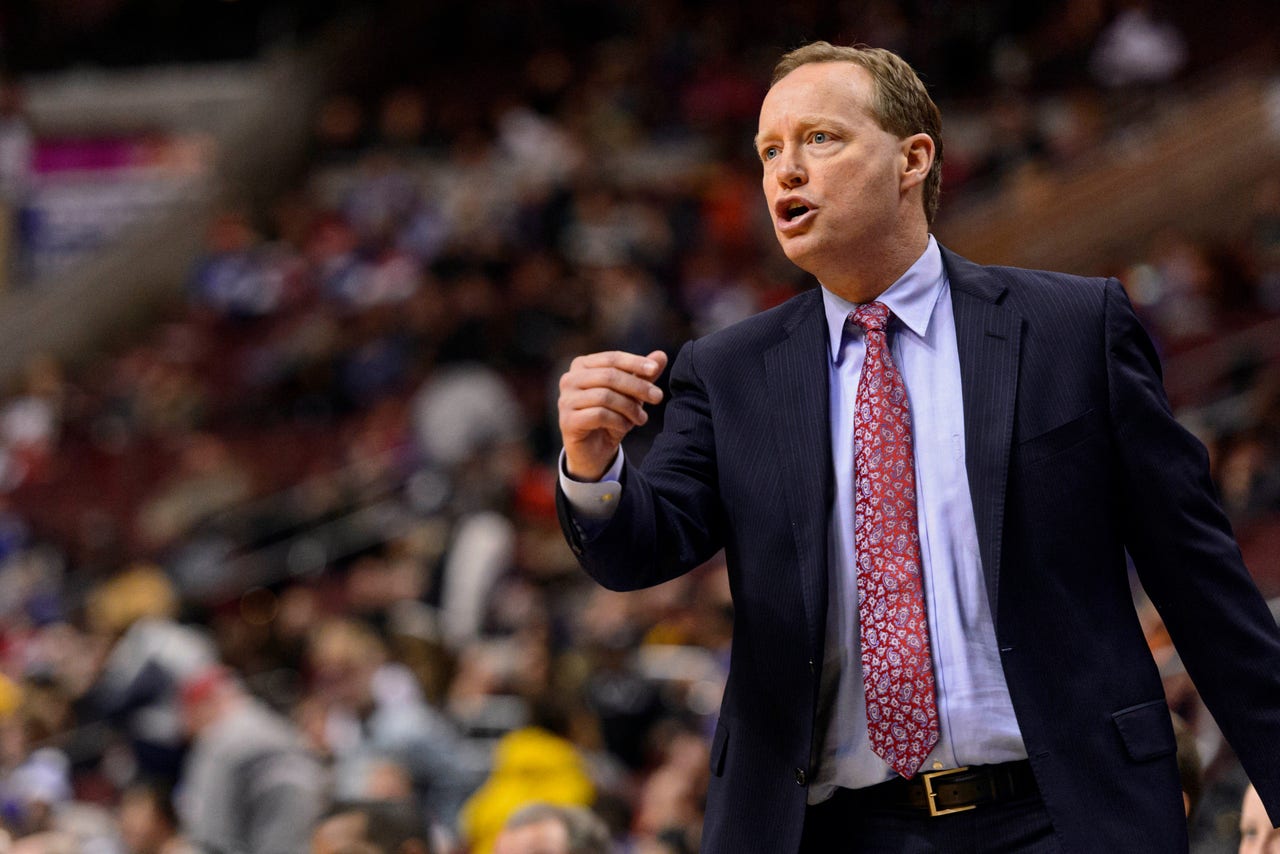 There was no avoiding it. Not after leading the Atlanta Hawks to the top of the Eastern Conference.

Budenholzer was honored as the NBA coach of the year on Tuesday, an award that moved him to tears as he spoke about the people who meant so much to his career.

His players. His father. Danny Ferry. And, of course, Gregg Popovich.

He is clearly uncomfortable in the spotlight, rarely opening up about anything more than the next game. So it didn't sound like polite modesty when he said he would have preferred for Golden State's Steve Kerr to win the award.

Kerr, whose team finished an NBA-best 67-15 in his first season with the Warriors, was second in the balloting, the only other candidate to receive serious consideration.

"I don't want to sound like I'm not appreciative of it," Budenholzer said after a ceremony at Philips Arena. "But in a perfect world, I'd be somewhere else."

A longtime assistant under Popovich at San Antonio, Budenholzer won the Red Auerbach Trophy for guiding the Hawks to a 60-22 mark during the regular season, the best in franchise history. They had a 19-game winning streak, became the first NBA team to go 17-0 during a calendar month, and cruised to their first division title since 1994, which also was the last time they held a No. 1 seed.

"He deserves it," said Jeff Teague, the Hawks' All-Star point guard. "He's made me a better player. He's made our team better."

"I'm actually really glad Mike won," Kerr said. "I just got into this gig. It would've felt really weird to win that award when this team has had so much success and was already really good last year before I got here."

Indeed, while the Warriors put together one of the great seasons in NBA history, they did go 51-31 under former coach Mark Jackson. Atlanta went 38-44 during Budenholzer's injury plagued debut season with the Hawks, a result that was not unexpected given the team's almost total makeover the last couple of years.

The Hawks' turnaround is even more impressive given their troubled offseason. Emails emerged showing owner Bruce Levenson made racially charged comments about the fan base, prompting him to put the team up for sale. Not long after, it was revealed that Ferry -- the team's general manager, architect of the roster overhaul, and the one who hired Budenholzer -- made racially insensitive comments during a conference call to discuss the potential signing of free agent Luol Deng. Ferry was forced to take an indefinite leave that lasted all season.

The 45-year-old Budenholzer, with help from assistant GM Wes Wilcox, took control of player personnel matters as well as his coaching duties. He molded a tight-knit unit that has been willing to sacrifice individual stats for the good of the team.

After a sluggish start, the Hawks finished seven games ahead of the overwhelming East favorites, LeBron James and the Cleveland Cavaliers. Atlanta had six players average in double figures, with the five starters finishing between 12.1 and 16.7 points a game.

In January, all five starters were honored as NBA players of the month, the first time the league has given the award to an entire unit.

"It's been a tough year," said Budenholzer, the first coach of the year from Atlanta since Lenny Wilkens in 1994. "But hopefully everybody has handled it to the best of all of our abilities."

Budenholzer teared up as he talked about his father, a retired high school coach who "gave me my love for the game." He also got emotional when thanking Ferry, whose future with the team will apparently remain in limbo until new ownership takes over.

"I would not be here today without Danny Ferry's faith in me," said Budenholzer, whose team leads Brooklyn in the opening round of the playoffs heading into Game 2 Wednesday night.

In a fitting touch, the Hawks arranged for Popovich, whose defending NBA champions are in Los Angeles to play the Clippers in the Western Conference playoffs, to make the call to Budenholzer telling him he was coach of the year. It was Popovich who gave Budenholzer his start in coaching as a lowly film coordinator.

"This award has a permanent spot on his desk in San Antonio," Budenholzer said, his eye moist as he looked at the trophy. "He just shares it around the league every couple of years."

LaVar Talks His Stuff at Club Shay Shay
LaVar Ball stopped by the club to talk LaMelo being drafted, his three sons playing together, and going one-on-one with MJ.
9 hours ago

NBA Free Agency Tracker
The NBA free agency period is officially underway. Stay up to date with all the latest moves across the Association!
13 hours ago