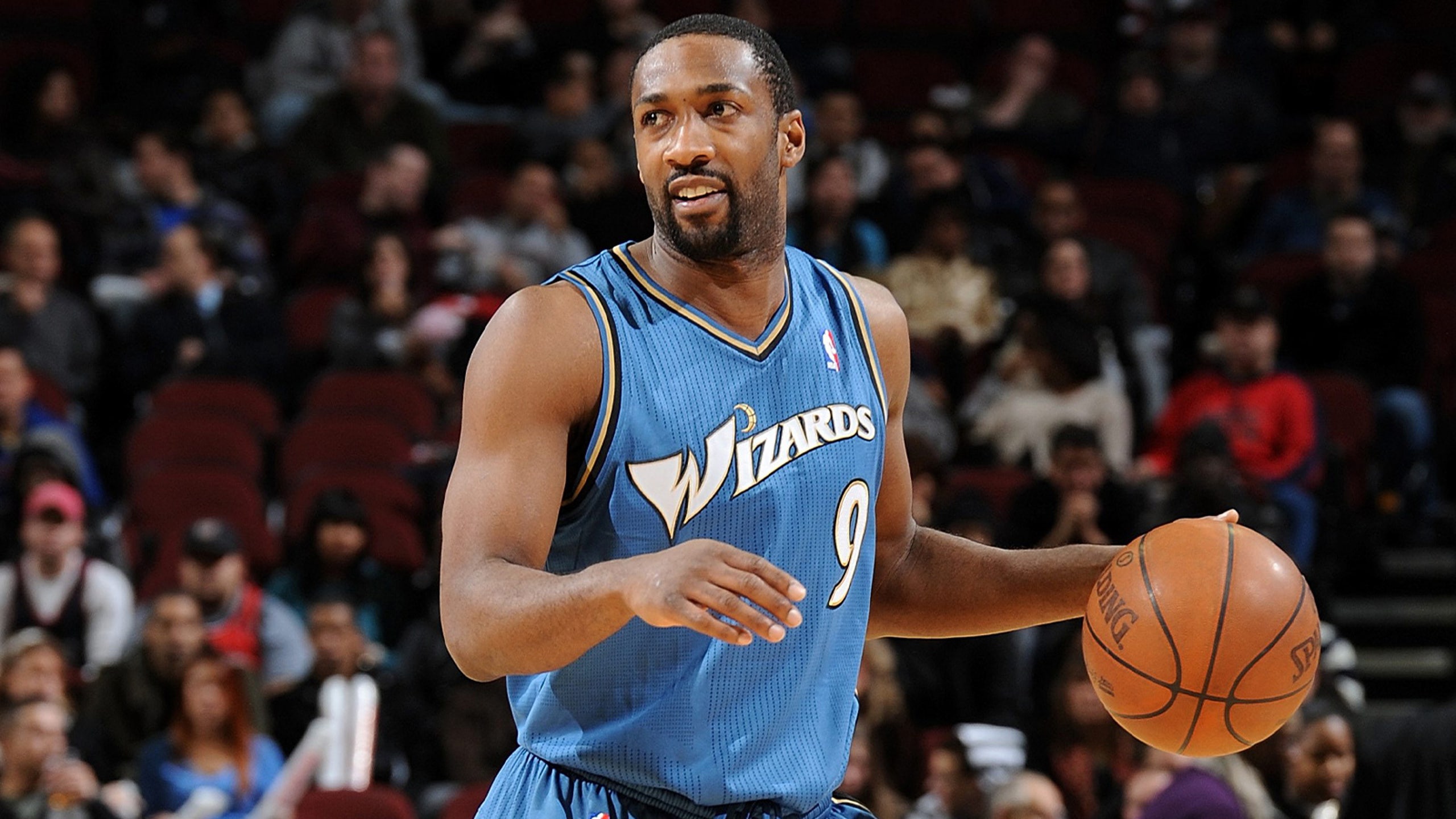 The stars keep coming out in droves to get beyond the velvet ropes and chat with Shannon Sharpe on his podcast, Club Shay Shay.

This week, Sharpe welcomed in three-time NBA All-Star and host of The No Chill Podcast, Gilbert Arenas.

And in true Agent Zero fashion, Arenas did not hold back.

While Arenas touched on a whole laundry list of subjects, including Nate Robinson's boxing debut, the Russell Westbrook/John Wall trade and his early encounters with LeBron, Arenas' critique of Giannis Antetokounmpo is sure to turn a few heads. 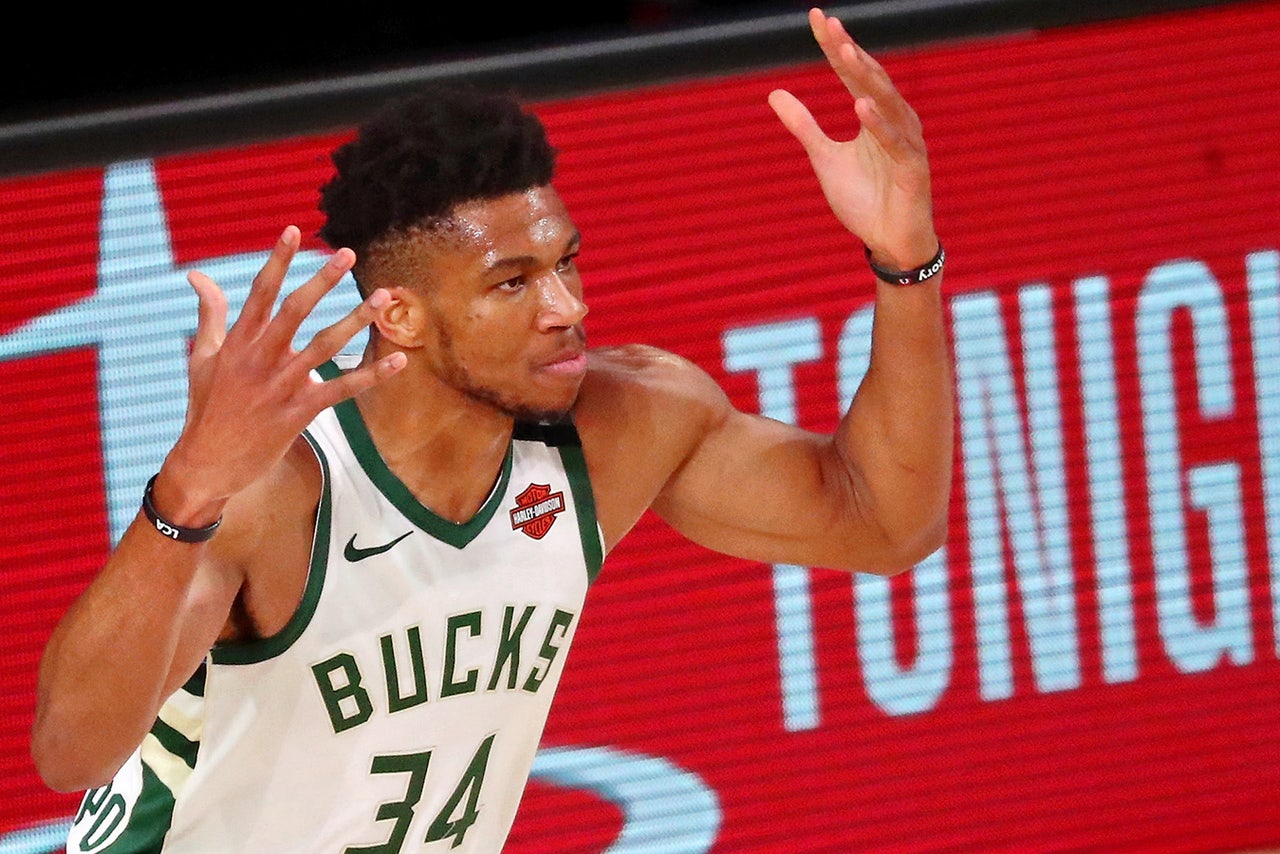 Sharpe posed Arenas a straightforward question: "What does Giannis need to do to win a championship?"

And Arenas answered bluntly: "Learn how to play basketball."

His Bucks famously crashed out of the 2020 Eastern Conference semifinals after posting a league-best 56-17 record in the regular season.

The Bucks were favored to come out of the East when the playoffs began but managed just one win in their series against the Heat.

Giannis averaged 21.8 points, 11 rebounds and 5.3 assists in the four games he played before missing the series-clincher due to injury, all of which fell below his season averages of 29.5 points, 13.6 rebounds, 5.6 assists.

"To be honest, he's the James Harden of the East Coast. What James Harden is in the West, is what Giannis is there. You have a guy who's not a point guard, who dominates the ball, and he's playing one style. And that style is: 'I'm gonna try to take all the big men who can't move off the dribble, Euro step and get some dunks.' That is amazing during the regular season, but when that court gets small you can't do that anymore."

Agent Zero offered some tips for Antetokounmpo to improve his game and add more dimensionality:

"Unless he learns how to play back-to-the-basket, where, when he gets the ball, teams are actually shifting, now [Khris] Middleton hit three threes, now they've gotta play you one-on-one, now you can go score, now you can do those little things."

One of Arenas' former teams, the Washington Wizards, recently made headlines following a blockbuster swap of guards with John Wall heading to the Houston Rockets and Russell Westbrook going the other way.

When it came to picking a winner in that trade, Arenas gave the edge to his former employer.

"I think Wizards win a little bit on this one. Because even though Westbrook needs the ball, he's not a bouncer. He doesn't need many dribbles to actually do what he's trying to do. He gets right to the point."

Arenas touched on a wide variety of other basketball topics, too, including what makes LeBron James such a great player and why Arenas knew James would be destined for greatness as a teenager.

While other major basketball topics, like the Los Angeles Clippers' postseason collapse and Arenas' own NBA career ⁠— plus his countless stories on and off the court ⁠— were discussed, Sharpe and Arenas did kick off the pod chatting about ex-NBA player Nate Robinson's ignominious foray into boxing.

After Robinson's knockout at the hands of YouTube star Jake Paul went viral, Arenas posted an Instagram that also gained traction on social media. Rather than piling on Robinson, Arenas offered a bit of support ... albeit in a not-entirely-SFW fashion.

When Sharpe brought the moment up, Arenas expounded on his decision to offer Robinson words of encouragement.

"I know because of the Currys, the LeBrons, everyone laughing, that probably hurt his soul. I think that hurt more than the actual fight, losing to a YouTuber. But it's your peers, you feel like you let them down. As a big bro to him I'm like, 'No, the letdown is if you don't get back into that ring.'"

Episode 12 of Club Shay Shay with Arenas clocks in at just under two hours, so there is a lot more to unpack from the episode. Be sure to give it a download and subscribe wherever you get your podcasts, or catch the whole interview below:

How to win $25,000 on NBA Wednesday
A possible NBA Finals preview looms, as the West's top team heads to Philadelphia to face the East's top dog.
10 mins ago

Philly Rising
After big changes across the franchise, the 76ers are atop the East so far this season. Is this the year they break through?
1 hour ago

Still Holding Court
LeBron James put up 46 in his old stomping grounds on Monday night. Just how incredible has the King been this season?
3 hours ago

Sports World Honors Kobe And Gigi
On the one-year anniversary of the tragic deaths of Kobe and Gianna Bryant, here's how the sports world paid tribute.
4 hours ago

Remembering Kobe: His Legacy Lives On
The Lakers organization still struggles with the loss of Kobe Bryant. But his legacy inspires them on a nightly basis.
5 hours ago
those were the latest stories
Want to see more?
View All Stories
Fox Sports™ and © 2021 Fox Media LLC and Fox Sports Interactive Media, LLC. All rights reserved. Use of this website (including any and all parts and components) constitutes your acceptance of these Terms of Use and Updated Privacy Policy. Advertising Choices. Do Not Sell my Personal Info