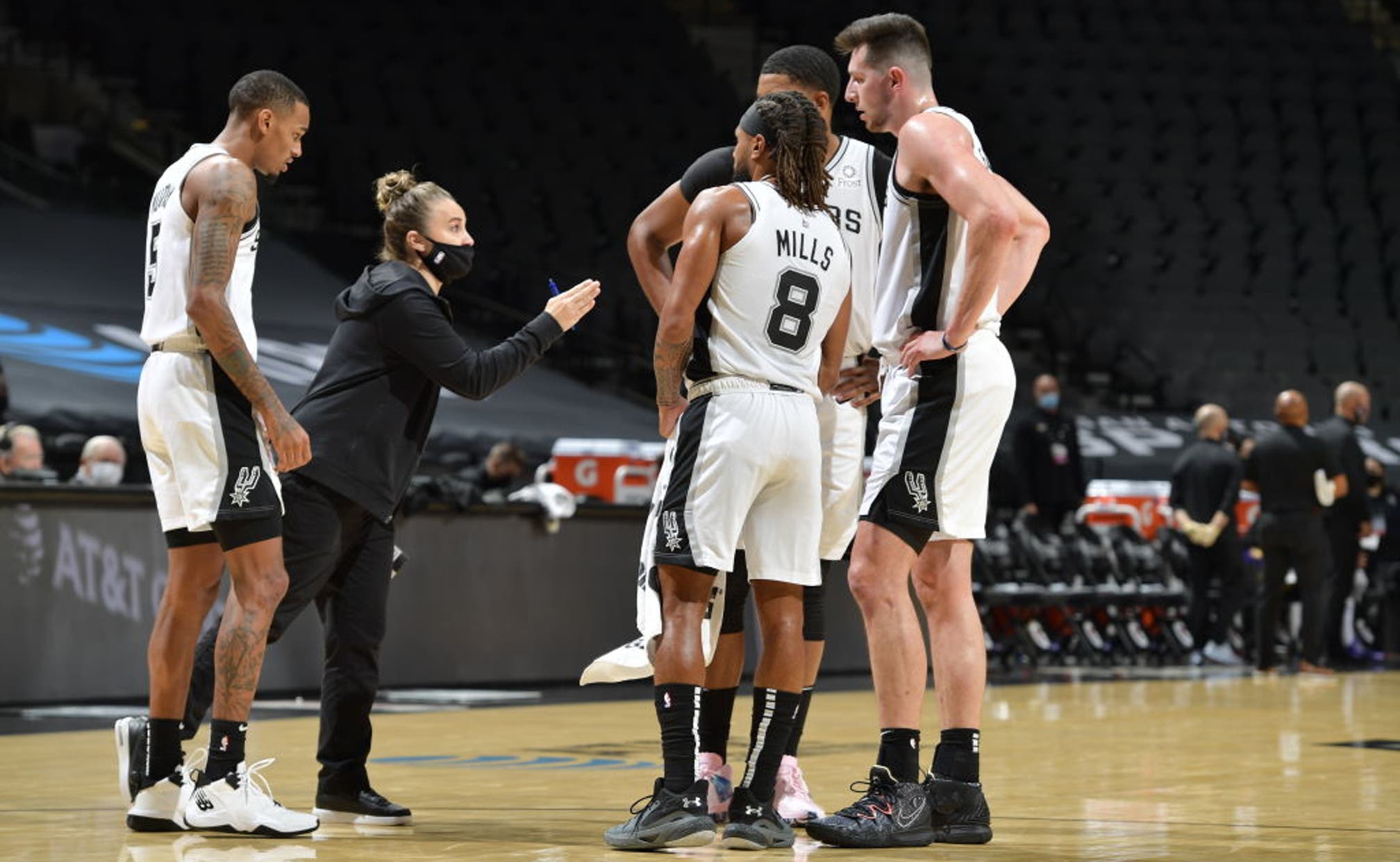 There was no big announcement. No pep talk. No celebration.

After San Antonio Spurs coach Gregg Popovich was ejected late in the second quarter of Wednesday's game against the Los Angeles Lakers, picking up two technical fouls before halftime, he made history with a gesture.

"He officially pointed at me," Spurs assistant coach Becky Hammon said. "That was it."

Hammon went on to become the first woman to coach a regular season NBA game in the league's 74-year history.

The 43-year-old Hammon didn't have time to process the importance of that moment. She couldn't contemplate how it might affect her future, whether it could elevate the way women are viewed in a male-dominated field, or how it might inspire future generations.

Not against LeBron James and Anthony Davis, who led the defending champions to a 121-107 victory.

"Honestly, in the moment, I was just trying to win the game," Hammon said. "I say this a lot, but I try not to think about the huge picture and the huge aspect of it because it can get overwhelming."

Hammon took over at the helm with just under four minutes remaining in the first half and the Spurs down, 52-41. The Spurs went on to cut their deficit to five points before halftime, but in the third quarter, the Lakers shot 61 percent from the field and 85.7 percent from beyond the 3-point line, effectively eliminating any chance at a San Antonio comeback.

Hammon did everything in her power to turn things around.

In fact, Patty Mills said it felt as though Popovich never left.

"You know what?" Mills said. "There is not that much difference in the ferocity between the both of them. She came out guns blazing a couple of times in those timeouts. But, again, everyone is receptive to that."

Hammon's big opportunity came on an unexpected date, at a random time.

But she was ready.

It's something the former WNBA superstar has been preparing for since she suffered a torn ACL in 2013 and asked Dan Hughes, her then-coach on the San Antonio Silver Stars, if he'd ask Popovich if she could attend Spurs practices to learn about coaching while she couldn't play.

Popovich, who had long admired the grit Hammon showed by transforming herself from an undrafted player into a six-time All-Star, obliged her request.

She quickly impressed him. 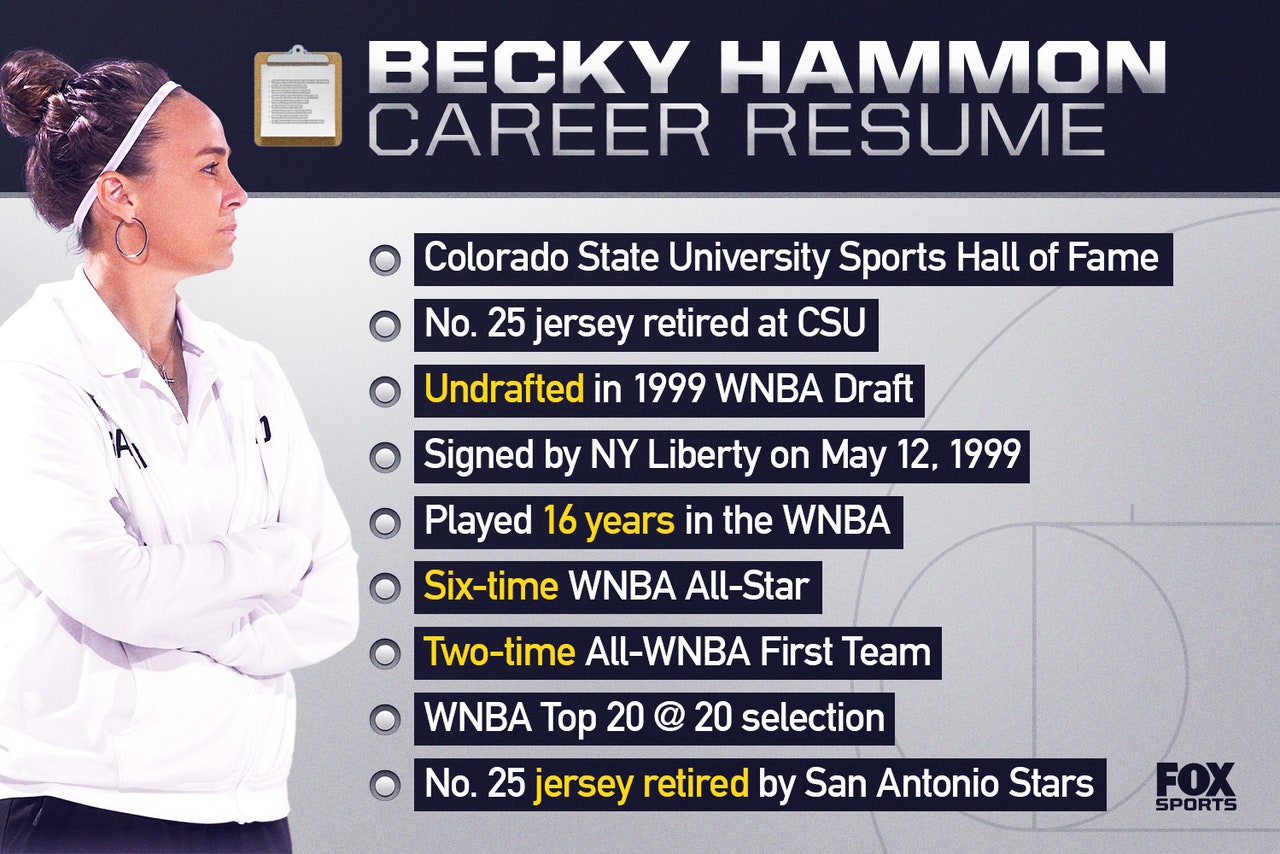 Hammon was officially hired as an assistant coach for the Spurs in August 2014. She went on to make headlines the following summer as the first female head coach of a Summer League team, leading the Spurs to a championship in Las Vegas in 2015.

Popovich used to watch Hammon play and had long respected her confidence and leadership style. But when they started working together, and he saw how her mind worked, his belief in her skyrocketed.

"We found out about her knack for the game, her innate understanding of what wins, what loses, what has to be there to make a program," Popovich said before Wednesday's game. "So she’s got all of the tools necessary to be a heck of a coach in our league."

It's quite an endorsement from one of the most widely-respected coaches in NBA history, who led the Spurs to five championships and an NBA record-tying 22 straight playoff appearances.

Popovich never cared about Hammon's gender. He wanted the best person for the job. And he believed that was her.

His team did, too.

Hammon gained the players' respect with her resume. She's sixth on the WNBA's all-time assists list (1,708) and 12th in all-time points (5,841). Over her 16-season career, she was savvy on both ends of the court and everyone immediately realized she had a lot to teach.

"She’s quick on her feet, understands defensive coverages, what we should run," DeMar DeRozan said. "...You don’t think twice about it. She’s one of us. When she speaks, we are all ears."

"I love Becky to death," Dejounte Murray said. "We are really, really close. She texts me on holidays to ask about my daughter, and I ask about her kids. I appreciate her."

Even though Hammon made headlines Wednesday, her guiding the team is nothing new.

Often in practices, players will be divided into two teams, one coached by Popovich and the other by her.

It's normal to them.

But Hammon recognizes the phenomenon appears unusual to just about everyone else, and that many people question whether a woman can truly lead a team of men.

The players themselves, however, are not among that group.

For James, seeing Hammon on the sidelines was a welcome change.

After his team's win, which came on a night in which he made history by becoming the first player to score in double-figures in 1,000 straight games, James took notice of a different historical feat.

"It’s a beautiful thing just to hear her barking out calls, barking out sets and she’s very passionate about the game, so congrats to her and congrats to the league," James said.

According to NBA rules, the loss will go on Popovich's record.

But really, that's all unimportant. Hammon forever changed things in the league. And everyone around her hopes she'll accomplish even more, such as becoming the NBA's first female head coach.

On Wednesday, she took another big step towards that goal.

"The future is bright for her," Murray said. "I hope she sticks to it and doesn’t give up. One day it may happen, or it may not happen. Who knows? But she is definitely on the right road, and I think everyone here appreciates her.

"She is setting an example for every woman out there."

Reactions To Harden's Impressive Debut
The Beard was in classic form in his first game with Brooklyn, making NBA history along the way. Here's how people responded.
19 hours ago