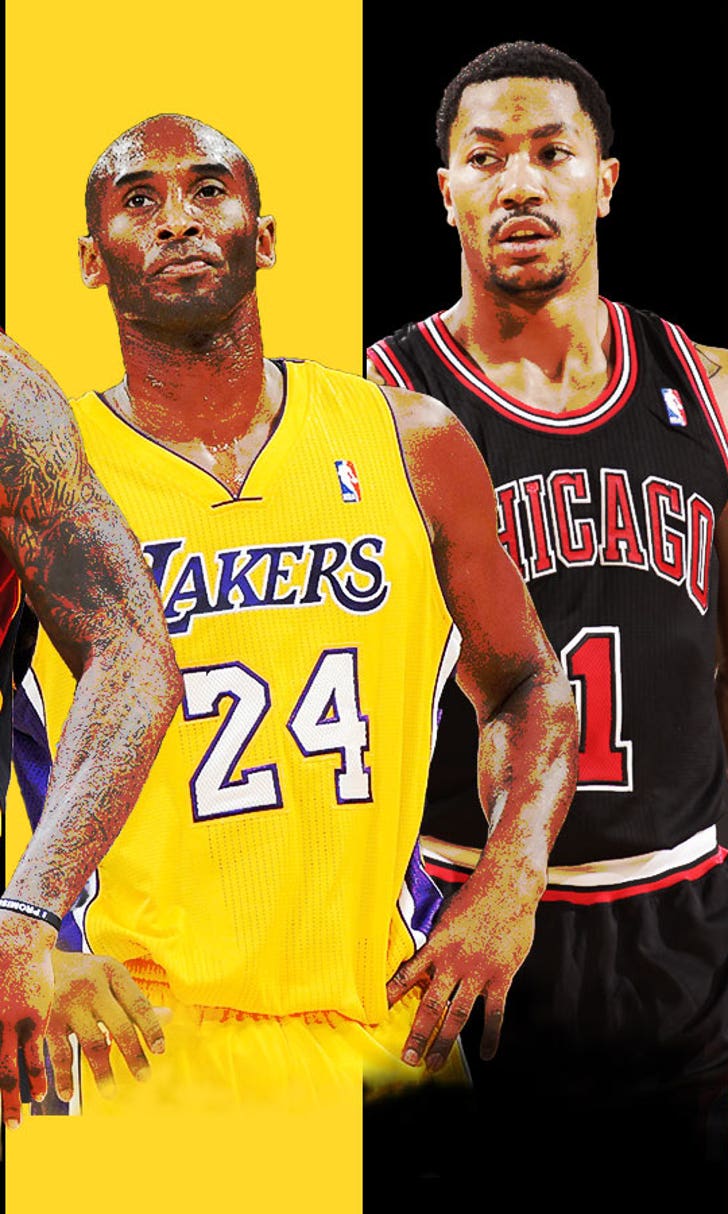 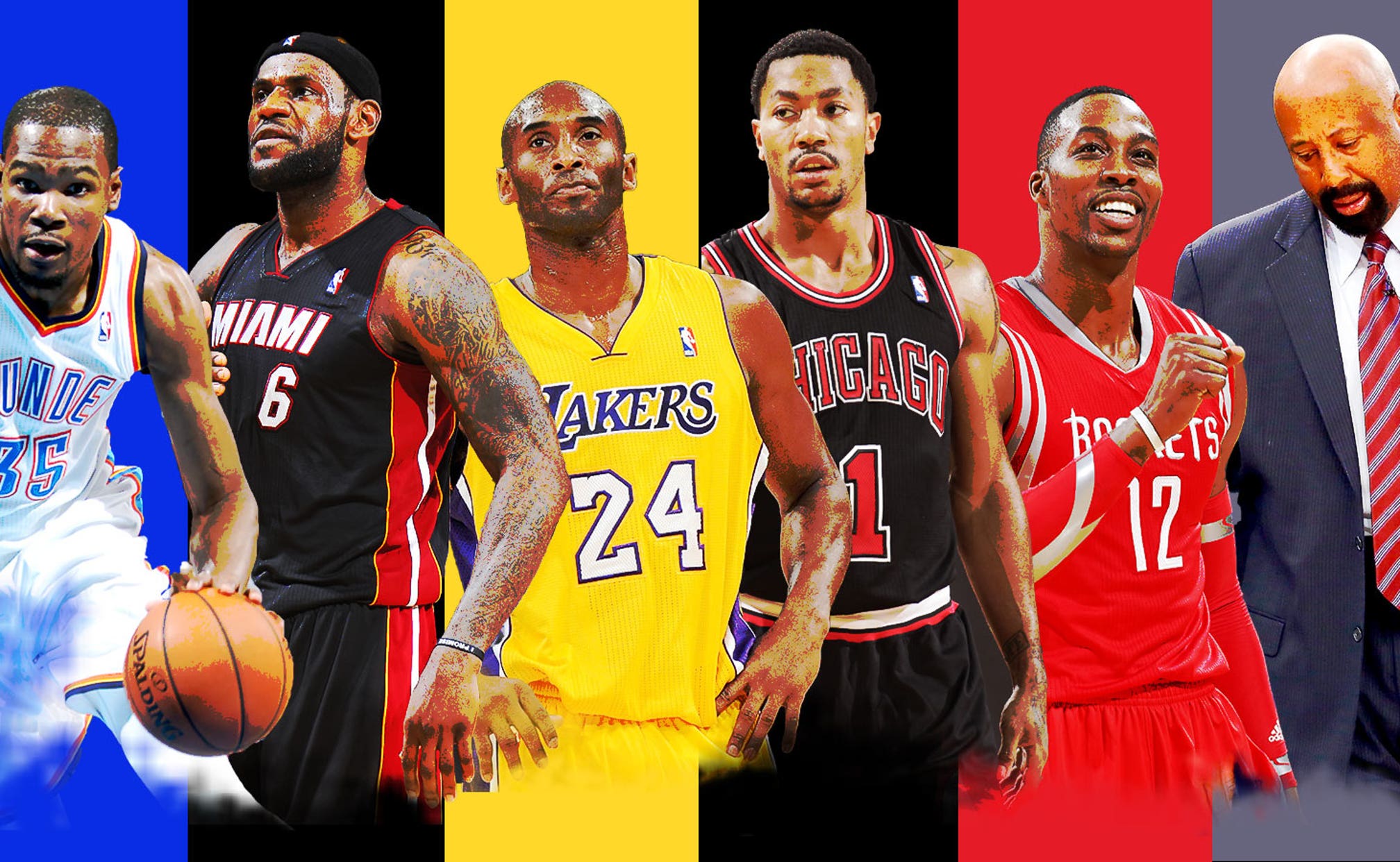 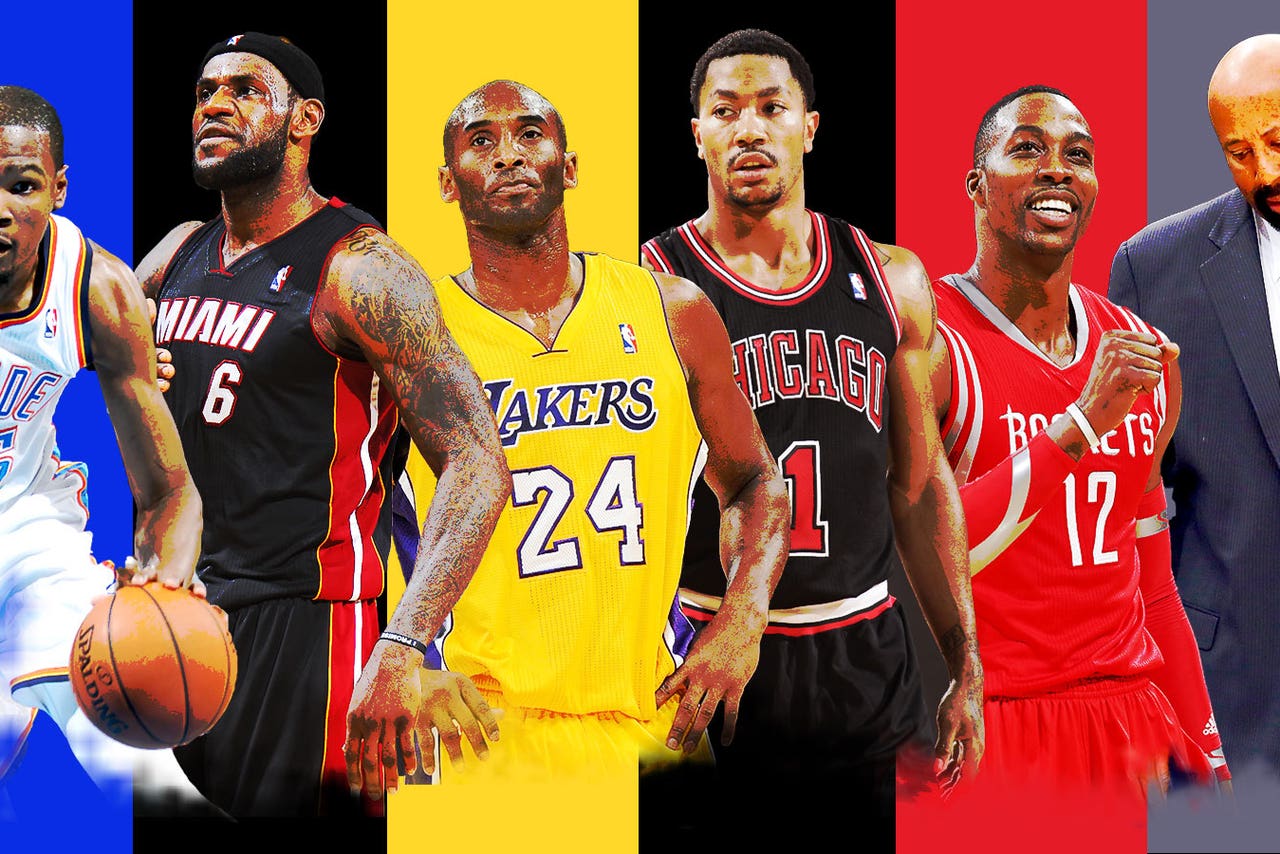 There are exactly 30 days left in the 2013-14 NBA regular season and, while you may be clamoring for the playoffs to just begin already, there are still plenty of storylines that need to play out first. Here's a list of the top 30 things to look for before the postseason begins.

1. Kevin Durant could be MVP

Durant ranted last year that he's tired of being second to LeBron James in terms of championships and MVPs. He's holding a slight edge in the MVP race, but can he keep his grip this final month?

2. But greedy LeBron James wants that trophy too

The beauty of this LeBron-Durant MVP chase is that both have embraced the battle. James isn't pretending he doesn't care, flat-out telling reporters he wants the award. He could still snatch it from KD's hands.

3. The Pacers and Heat give us a final peek

We get two more previews of the likely Eastern Conference Finals, in Indy on March 26 and in Miami on April 11. The battle for homecourt could be on the line, which may mean neither team will hold anything back. 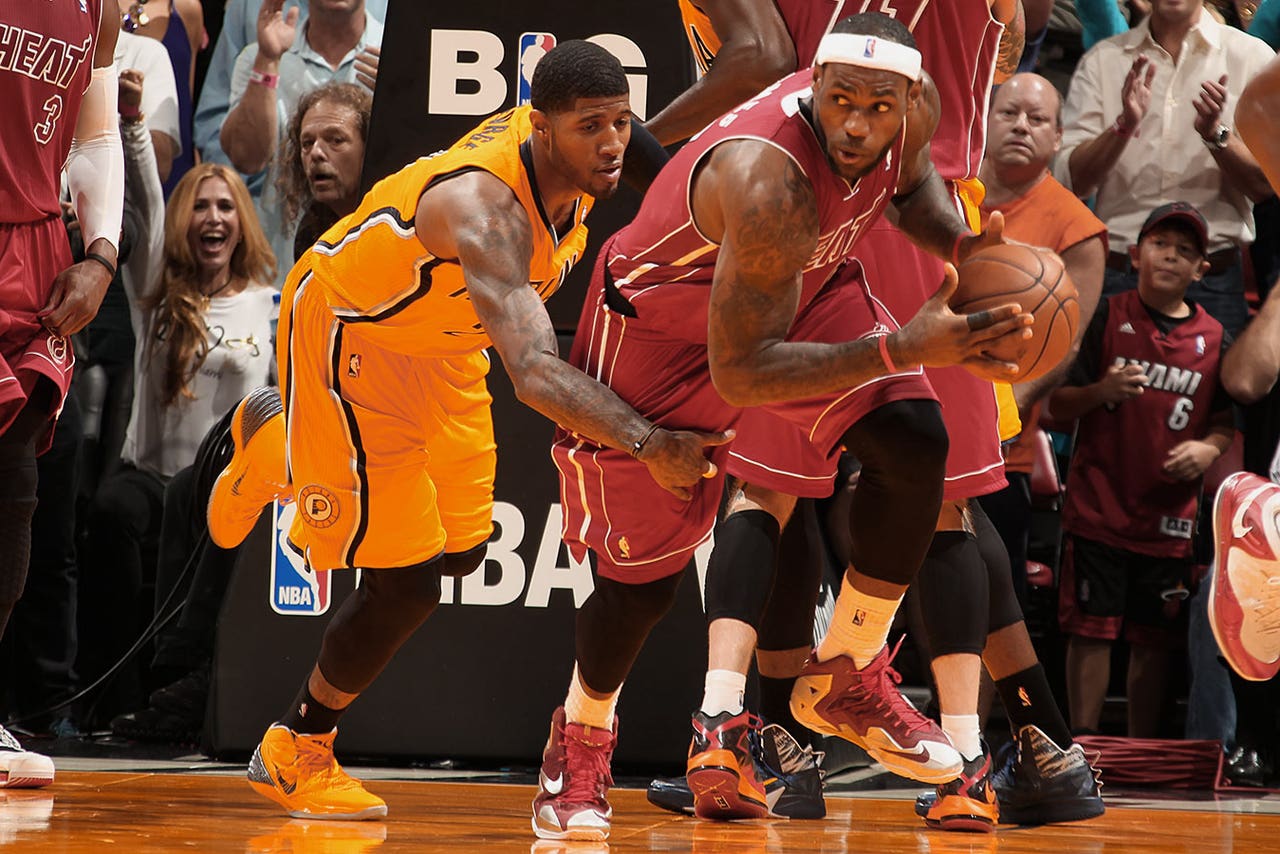 The Pacers and Heat will go head-to-head twice more in the season's final month.

4. The battle of West powers

The nationally televised matchup between the Thunder and Spurs comes on April 3 in San Antonio. This could be a preview of the Western Conference Finals, but it probably won't look like it; neither coach may be willing to show too much of their gameplan at that point.

Kobe Bryant will try to (un)officially fire Mike D'Antoni this offseason. Until then, how many times can he vent about it through the media? The over/under is six, coincidentally the same number of games Bryant played this season.

The 76ers have their eye on history. The team's current 21-game losing streak has set a franchise mark, but the real gold nugget in this tanking run is to surpass the 26-game losing streak set by the Cavs in the 2010-11 season. If they keep this up, there's no way Milwaukee can hang on to the tanking championship.

7. The Pacers look to keep the East's crown

Indy has held its No. 1 spot in the East all season, but can they hold off the Heat (3.5 GB) in the final 30 days? After losing in seven games to the Heat in last year's East Finals, it would be a dramatic fail if the Pacers relinquished control this late.

8. The Derrick Rose conversation will heat up

There's a new tradition in Chicago. Each spring, everyone gathers 'round the sports talk radio and asks the question: "Will, or should, Rose return for the playoffs?" The outcome will be the same as last year, but it's still a nice ritual.

9. If Rose is on the bench, he better chest bump

With the Bulls in the thick of the East's playoff picture, be on the lookout for more of Joakim Noah's gif-worthy moments with teammates. He's arguably the league's top center, and he's also perhaps the league's most interesting man.

10. Another reunion in Los Angeles

Dwight Howard has that huge smile, and Lakers fans are really going to hate him when he returns to Staples with his playoff-bound Rockets on April 8. 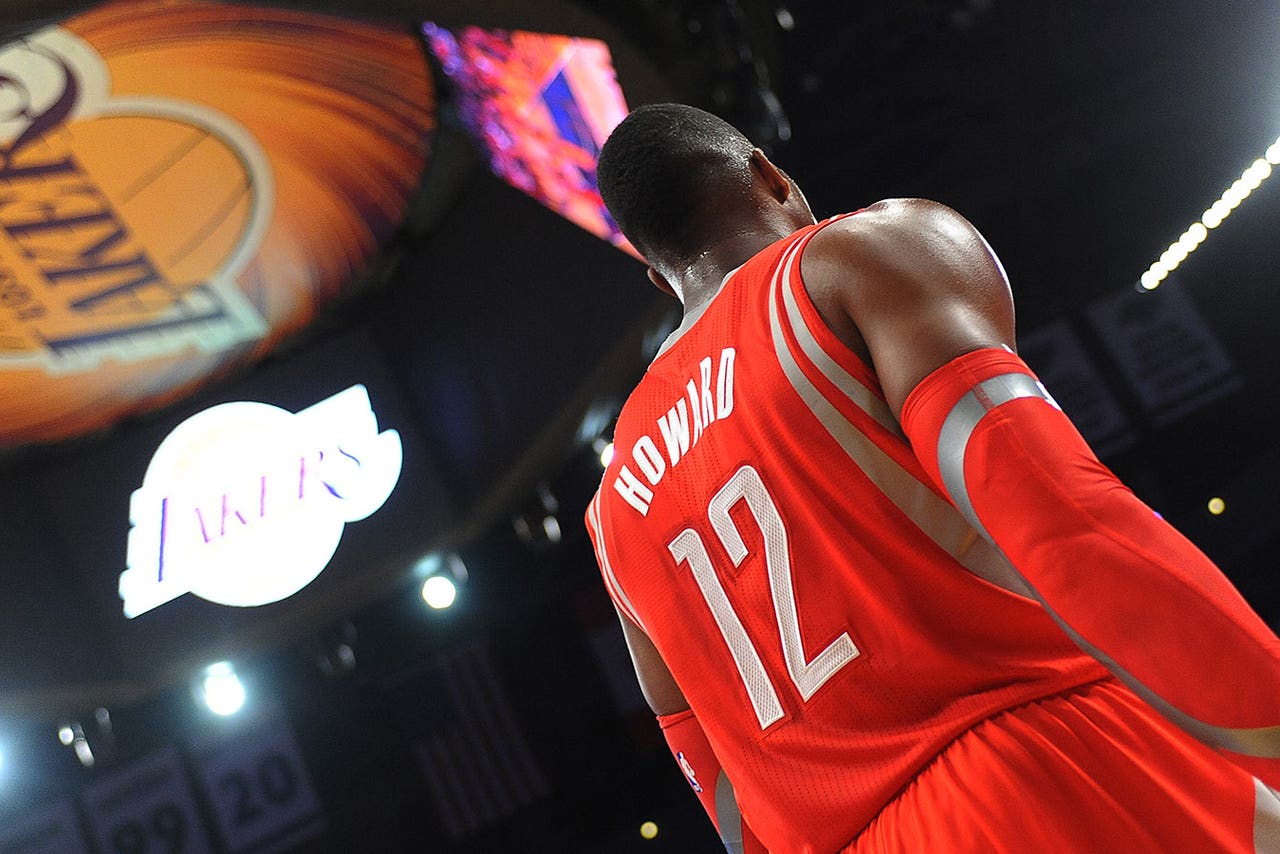 Dwight Howard will make one more visit to the Lakers' home floor.

Portland was the most provocative of this year's surprise teams early, opening up at 33-11 by Jan. 25. Since that date though, the Blazers are just 10-13. With 15 games left, Portland will be in the postseason, but this season may be more of a stepping stone than anything.

12. Curry will remind us just how elite he truly is

Stephen Curry averages 3.3 3-pointers per game, so he won't likely reach the 60 more he'd need to reach his record-breaking 272 3-pointers last season. He should get some MVP (third-place) votes though, as his numbers look mighty close to Derrick Rose's MVP season of 2011.

13. The Spurs fly back above the radar

It's such a Spurs thing to do. They fly undetected throughout most of the season, never giving an alarming reason to pay attention. Suddenly you check the standings and BOOM, they're the best team in the West. They could finish with the league's best record.

14. The day Woodson gets canned

The Knicks have actually won six in a row and are still in play for the postseason. If they don't make it, Mike Woodson's final game as coach could be at MSG on April 16.

The Wizards just might finish above .500, and make the postseason, for the first time since President Obama was first inaugurated. They may even host a first-round playoff series.

Apparently getting under the skin of Blake Griffin is a new part of every gameplan. Griffin is an all-around superstar at this point, but can he resist not taking the bait for another 30 days?

We knew Brooklyn would act as an NBA retirement home this season, but the hope is Kevin Garnett can return to playable health by the postseason. If him and Paul Pierce are healthy -- well, BINGO -- the Nets could reach the second round.

18. ROY chase will have some intrigue

Michael Carter-Williams seemed to have claimed the Rookie of the Year award in the first week of the season, when he dominated his first four games. But Victor Oladipo keeps pushing to tighten up the race. 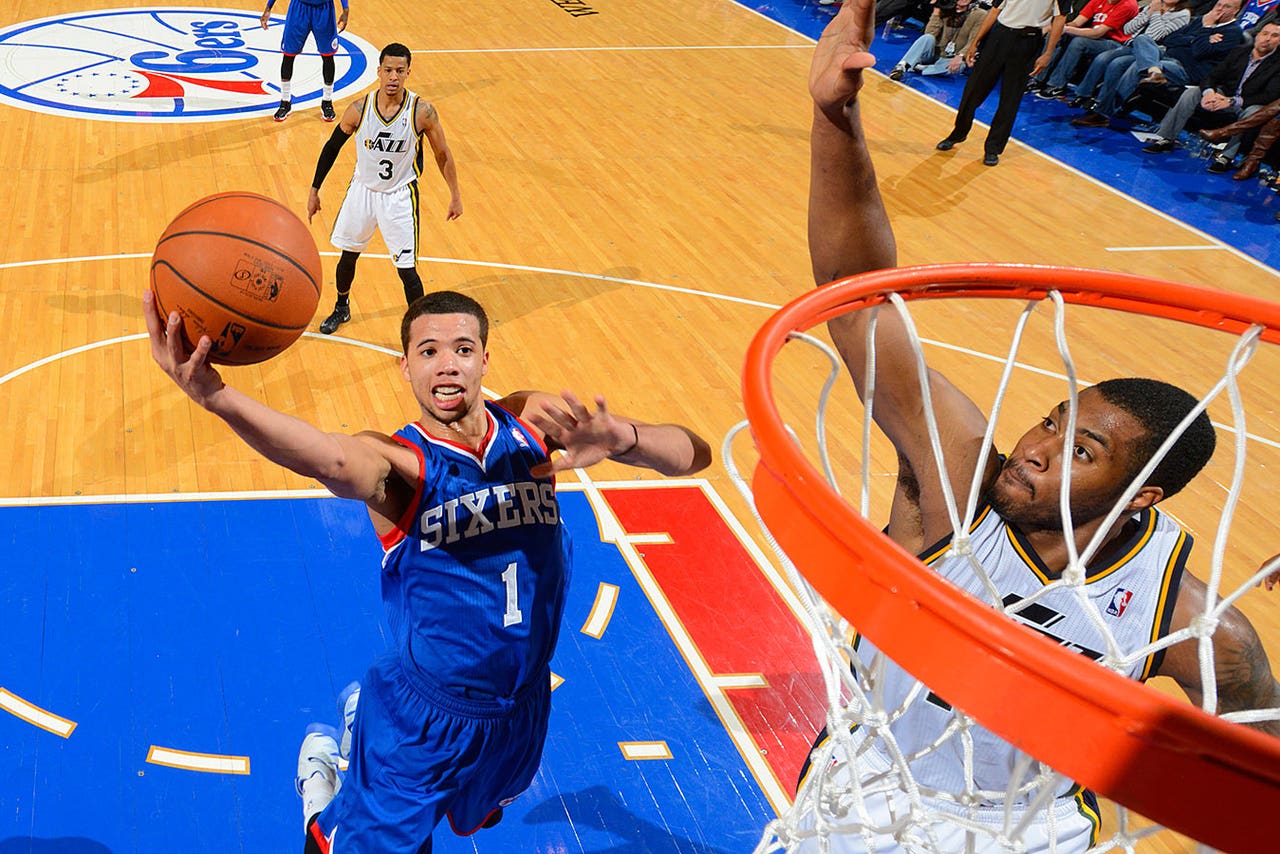 Despite the Sixers' struggles, Michael Carter-Williams could be your Rookie of the Year.

When the music stops, which of the top nine West teams will be left out of the postseason? Only 5 games separate the Blazers, Warriors, Mavericks, Grizzlies and Suns.

OKC was an incredible 21-4 earlier this season with Russell Westbrook. They were then 20-7 without him and became the hottest team in the league before his most recent return. Since then, the Thunder are just 6-5 and looking to regain that earlier chemistry before the playoffs.

The Clippers have the championship ingredients: multiple superstars (Chris Paul and Griffin), a championship coach, depth and heightened intensity. J.J. Redick's return from injury will be important, but finishing the season with a high seed will be critical.

22. How much Canadian magic remains?

The Raptors were a tanking candidate, and trading Rudy Gay was supposed to be another push toward the lottery. But 30 days away from the finish line, Toronto is the third-best team in the East.

23. How history will remember the East

The East is less laughable than it was earlier this season, but two current playoff-bound teams (Charlotte and Atlanta) are still below .500. The Bobcats may finish with a winning record, but the eighth seed will definitely have a losing record.

24. The curse of Kyrie continues

Kyrie Irving's potential season-ending biceps injury could be the final blow in the Cavs' season of disappointment. It's also yet another significant injury that's all too regular in the career of Cleveland's star.

The scene: Phil Jackson returns to Staples on March 25, this time wearing a Knicks jacket to complement his 11 rings. Look closely for the coffee-shop style conversation between Phil, Carmelo and Kobe as offseason recruitment begins. 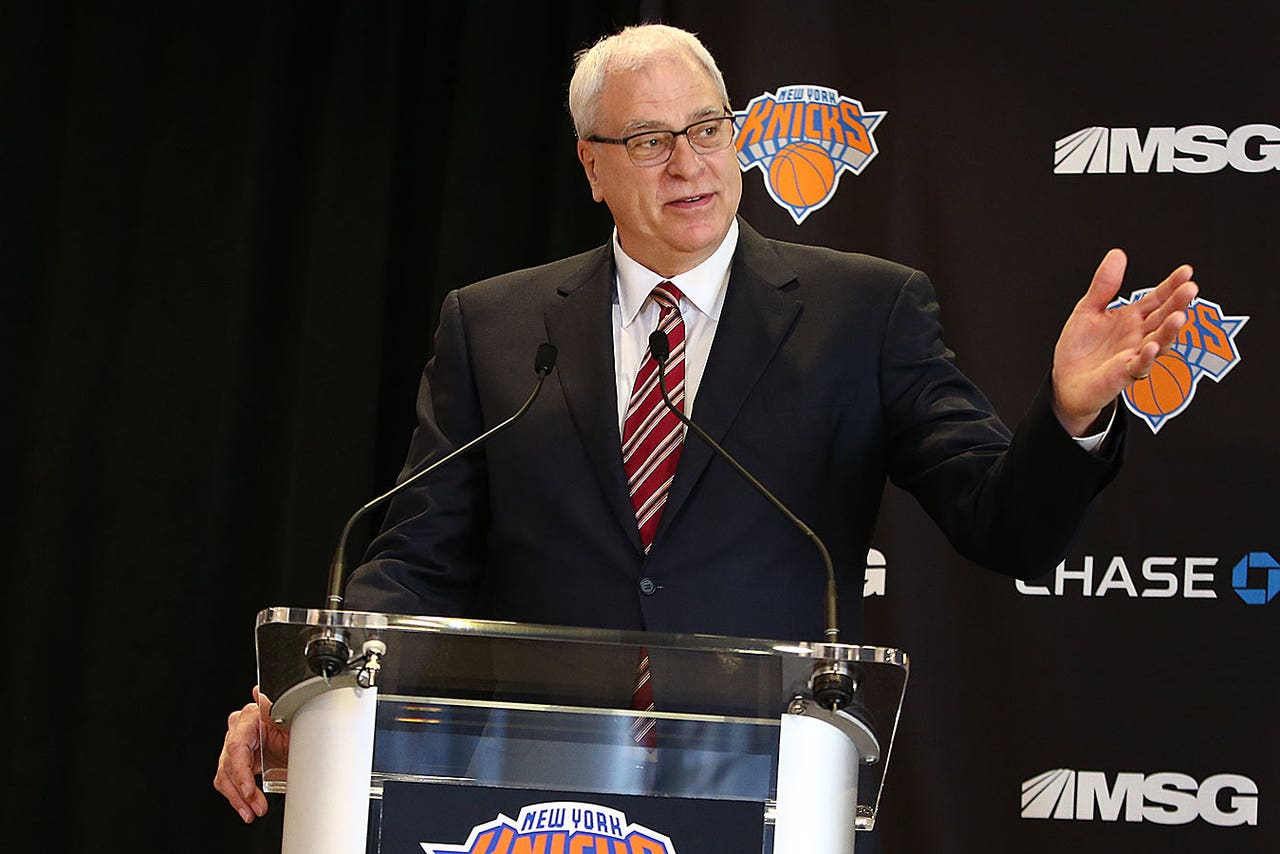 Phil Jackson is back to his roots with the Knicks ... what's up his sleeve for the rest of this season?

26. They wanna get so hot right now

The Clippers and Spurs are the hottest teams in the league right now, but the peak may be coming slightly early. Keep an eye on teams that start streaking now, in the final 10-15 games of the season.

Goran Dragic should win Most Improved Player for the surprise Suns, but both Lance Stephenson and Anthony Davis could also make a run down this final stretch. Coach of the Year already belongs to Jeff Hornacek.

28. The Pistons' misery nears an end

Joe Dumars can't possibly keep his GM job following this season. The Pistons may wait to make that call until after the season, but Dumars might opt to resign before then.

March Madness is upon us, and of course NBA GMs will be paying attention. With so many teams circling the May 20 draft lottery, plenty of attention will be on the future of the NBA playing in the tournament.

The season ends with the two late games on April 16, the Clippers at the Blazers and the Suns at the Kings. Both games could have playoff implications, but mostly it means the end of the NBA's 82-game regular season, also known as the preseason for elite teams.

Follow the final stretch of the NBA through the lens of Jimmy Spencer on Twitter at @JimmySpencerNBA.

Nuggets Of Wisdom
For almost every team, down 2-1 in the conference finals to LeBron would be a must-win. Not for Denver, Martin Rogers explains.
2 hours ago

Super Herro Makes History
The Heat are on the verge of the Finals thanks to Tyler Herro, who joined Magic Johnson with one record and broke another.
2 hours ago

Lethargic In Los Angeles
The Lakers looked sluggish in their Game 3 loss to Denver. Will it wind up costing LeBron & Co. in the long run?
13 hours ago

'I Want to Win Tomorrow'
NASCAR's newest team owner, Michael Jordan, sat down with Bob Pockrass to explain his move into the Cup Series.
14 hours ago

A Shift In Momentum?
Boston welcomed the return of Gordon Hayward in Game 3, with hopes it will translate into a comeback series win over Miami.
16 hours ago
those were the latest stories
Want to see more?
View All Stories
Fox Sports™ and © 2020 Fox Media LLC and Fox Sports Interactive Media, LLC. All rights reserved. Use of this website (including any and all parts and components) constitutes your acceptance of these Terms of Use and Updated Privacy Policy. Advertising Choices. Do Not Sell my Personal Info