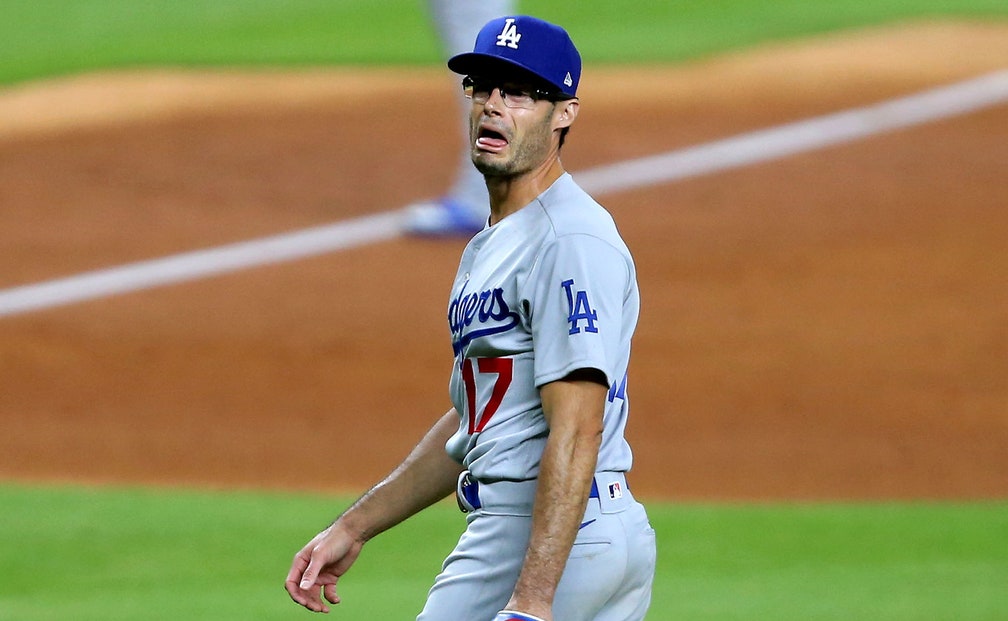 The first game between the Dodgers and Astros since Houston was punished for sign-stealing predictably resulted in fireworks — and now, suspensions.

Kelly stuck his tongue out and made a pouty face after striking out Correa, who ended up on his backside earlier in the at-bat after a wild pitch.

Correa wasn’t the first Astros batter that Kelly nearly plunked, either. Alex Bregman had to duck out of the way of a 3-0, 96-mph fastball earlier in the sixth inning.

Frustrations peaked after the inning ended and benches cleared, but no punches were thrown.

On Wednesday, MLB suspended Kelly for 8 games, with Dodgers manager Dave Roberts suspended for one game as well.

According to reports, Roberts will serve his suspension for Wednesday's game against the Astros. Kelly is appealing his punishment. Astros manager Dusty Baker, meanwhile, was fined an undisclosed amount.

After the punishment was announced, Mets pitcher Marcus Stroman gave his thoughts:

Following the game, which LA won 5-2, Baker was particularly upset with the Bregman pitch:

“When you throw a 3-0 fastball over a guy’s head, now you’re flirting with ending his career.”

Kelly proclaimed his innocence after the game, saying he didn’t throw at the Astros on purpose and joking about his poor accuracy.

Tuesday’s clash was the first time the Dodgers and Astros had squared off since Houston was punished for stealing signs in 2017. They won the World Series that year, beating the Dodgers in seven games.

In January, MLB concluded that "most of the position players" on the 2017 Astros either received sign information or participated in the sign-stealing scheme, which relied on using video and banging on a trash can to relay signs.

As a result, the league fined the organization $5 million, stripped them of draft picks and suspended then-GM Jeff Luhnow and then-manager AJ Hinch.

In February, Dodgers outfielder reacted to the punishments and apologies in an all-time rant, accusing Jose Altuve of stealing the 2017 MVP award from New York Yankees slugger Aaron Judge and a World Series ring from the Dodgers.

Correa then fired back, defending his teammate and telling Bellinger to, "shut the f--k up."

For more on the recent history between these two clubs, check out Ken Rosenthal's recap of this new, heated rivalry:

Betts Makes History With Trio of Homers
Mookie Betts tied the record for 3-homerun games on Thursday, going yard three times for the sixth time in his career.
9 hours ago

Cardinals-White Sox Game Postponed
Another Cardinals game has been postponed due to a coronavirus outbreak that has kept the team sidelined since July 29.
16 hours ago

Joe Kelly Rips 'Snitch' Astros
With his suspension reduced, the Dodgers pitcher didn't hold back in his criticism of the Astros' players.
22 hours ago