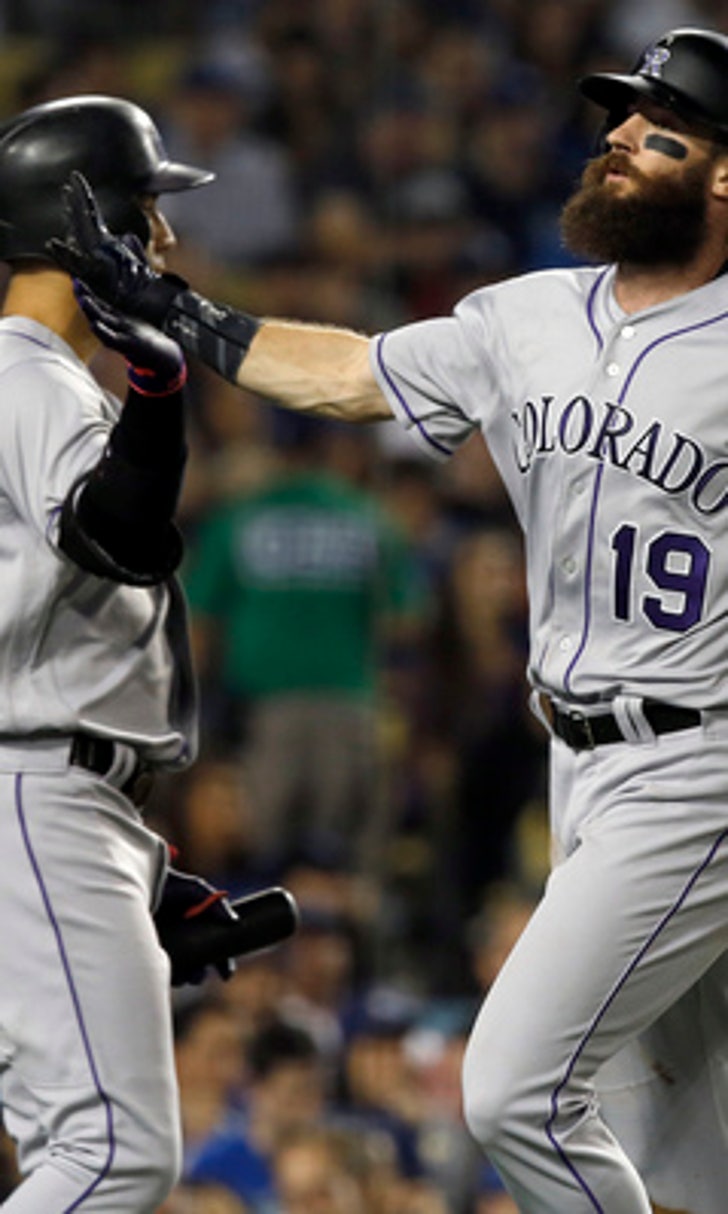 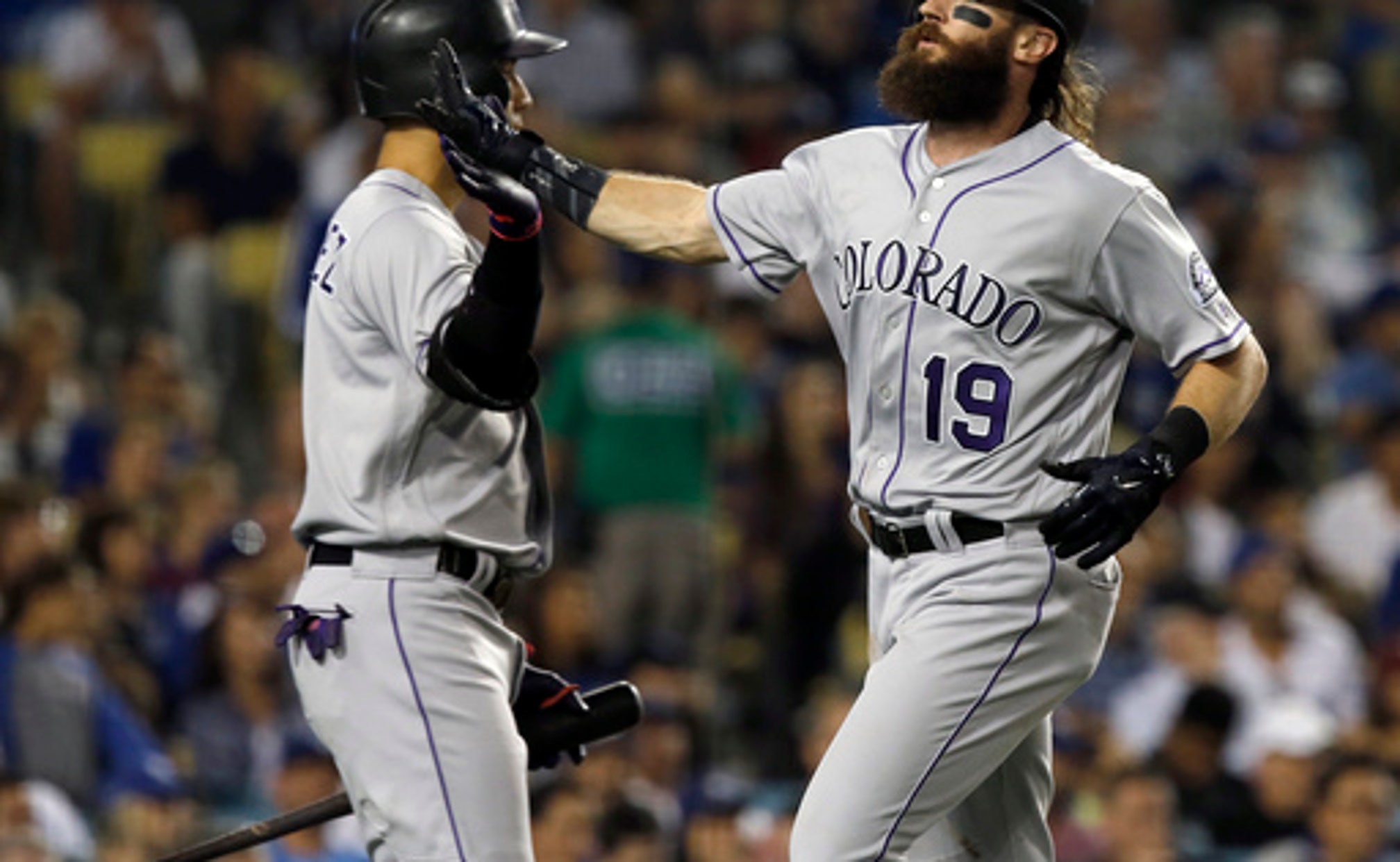 A night after the Rockies jumped on Kershaw in a 9-1 victory, Darvish was tagged for all their runs in Colorado's 5-4 victory Friday night that sent the stumbling Dodgers to their eighth straight loss and 13th in 14 games.

''It just wasn't meant to be,'' Dodgers manager Dave Roberts said after the NL West leaders opened a 4-1 lead in the first only to have Darvish blow it. He was chased after giving up four runs in the fifth.

Los Angeles still owns the best record in baseball at 92-49, but has equaled its longest skid since May 2013. The majors' best team at home this season has lost seven straight at Chavez Ravine for the first time since August 1999.

The Rockies rallied to take a 5-4 lead in the fifth. They have a three-game lead for the second NL wild card.

''Those guys are fighting for their lives as well and they came back on us,'' Roberts said.

Alexi Amarista doubled, Jonathan Lucroy walked and they moved up on Darvish's wild pitch. That set up pinch-hitter Raimel Tapia, who belted a two-run double. The ball eluded the glove of a diving Joc Pederson in center field and squirted into left, catching Curtis Granderson wrong-footed as he went to back up Pederson.

''Hitting is contagious like anything else in life and we've been doing that the last few days,'' Amarista said. ''Our approach has been pretty solid.''

The Dodgers had the potential tying run on in the fifth, sixth, seventh and eighth - three times on walks - but failed to score. They stranded 10 runners in the game.

Chris Rusin (5-0) got the win with two innings of one-hit relief. Greg Holland earned his 38th save.

Darvish (8-12) got his 1,000th career strikeout to reach the milestone faster than any other starting pitcher in major league history, but again failed to deliver a solid outing. The Japanese right-hander was coming off his worst start for his new team, giving up five runs and eight hits in just three innings of a loss at San Diego last weekend.

This time, Darvish allowed five runs and five hits in 4 1/3 innings. He struck out six and walked two in his sixth start since being acquired from Texas at the July 31 trade deadline.

''The last couple outings I was constantly thinking about my mechanics. Today I wasn't,'' Darvish said through a translator. ''I was getting behind in the count. I think it's just trying too hard maybe.''

Roberts blamed most of the damage to Darvish on soft contact by the Rockies.

''Yu should be encouraged,'' the manager said. ''The pitch execution was considerably better. It's important for him to not be results driven.''

Darvish fanned Carlos Gonzalez in the fourth, giving him 1,000 strikeouts in 128 career games and 812 innings.

Gonzalez homered on Darvish's first pitch with two outs in the first.

Los Angeles got All-Star shortstop Corey Seager back in the lineup after he was limited to pinch-hitting duty the last week because of a sore right elbow. Seager and All-Star first baseman Cody Bellinger were in the lineup together for the first time in 19 games.

But their bats couldn't save the Dodgers. Seager went 1 for 5, while Bellinger was 0 for 5 with two strikeouts and a run scored.

Justin Turner's two-run homer highlighted a four-run first that gave the Dodgers a 4-1 lead. Austin Barnes singled in the other two runs with two outs.

Pedro Baez was greeted with boos in the sixth, angering the usually low-key Roberts. The reliever had some rocky outings earlier in the week that cost the Dodgers, and he walked his first batter before striking out the next three Friday. ''I absolutely think it's ridiculous,'' Roberts. ''That's something that really (ticked) me off. These are our fans that come here and welcome him with boos. The way he responded was outstanding.''

Ashli Bellinger tossed out the first pitch to her brother, Cody, on his bobblehead night. She toed the rubber and tossed an arcing ball that the NL Rookie of the Year candidate caught while their dad, former big leaguer Clay Bellinger, and mother, Jennifer, looked on.

Dodgers: RHP Brandon McCarthy (right finger blister) pitched for Class A Rancho Cucamonga in the California League playoffs, his third rehab appearance. Roberts said there's a chance McCarthy could be back with the team this season. ... LHP Scott Kazmir (left hip strain) will pitch three innings of relief for Rancho Cucamonga on Saturday, but won't rejoin the Dodgers this year.

Rockies: RHP Chad Bettis (0-2, 4.91 ERA) makes his sixth start of the season after returning from testicular cancer. He is 0-2 with a 6.75 ERA in five career games, including three starts, at Dodger Stadium.