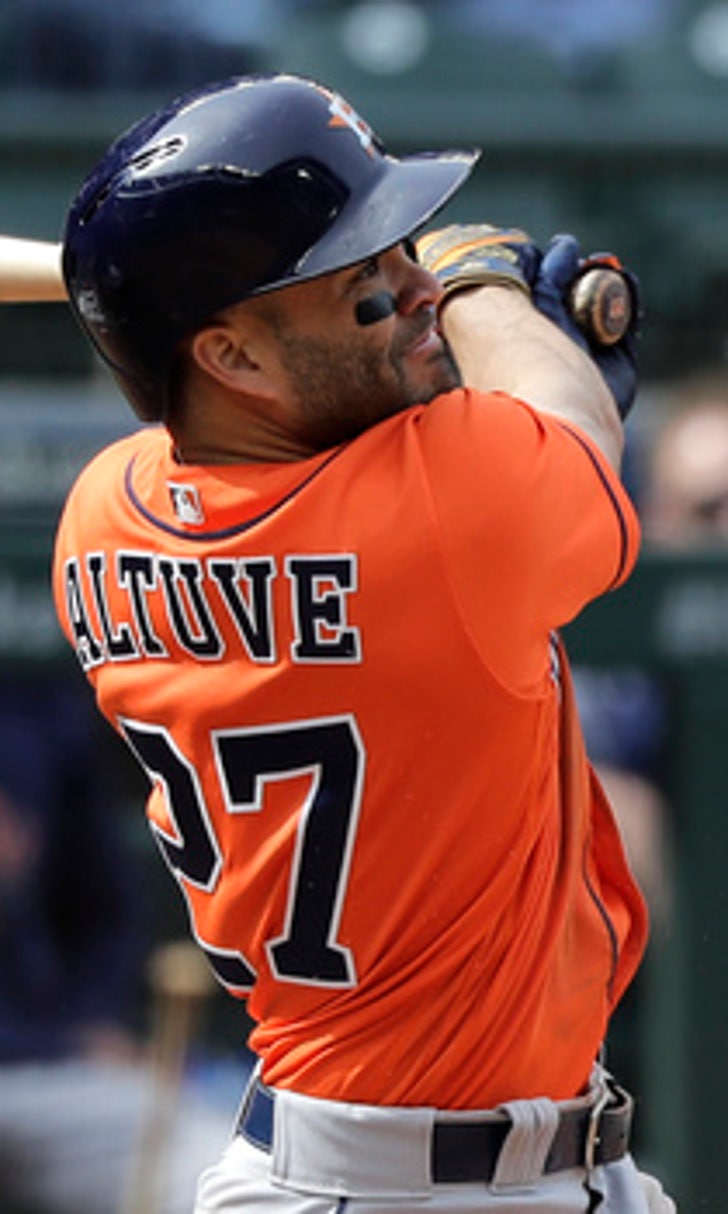 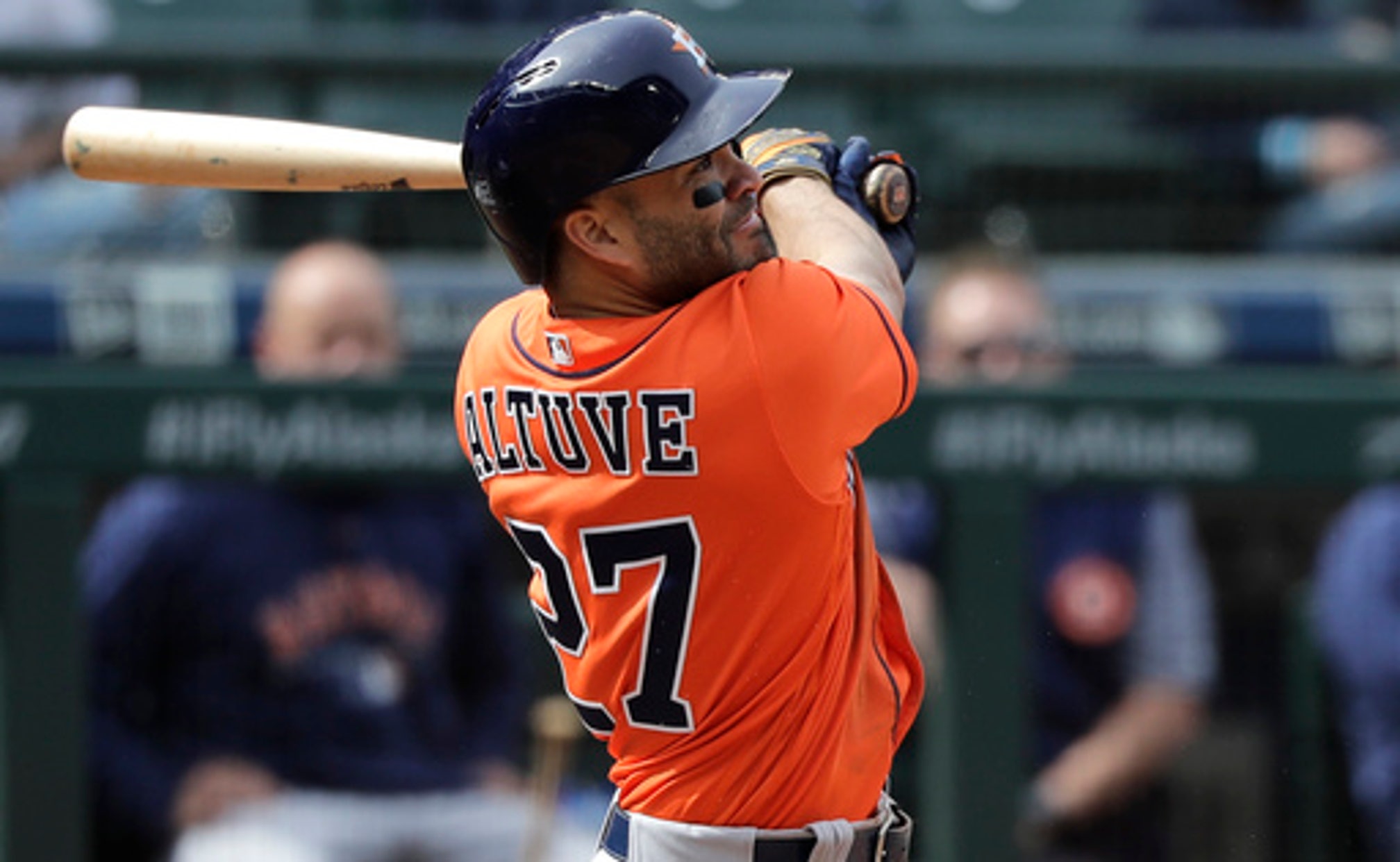 SEATTLE (AP) Charlie Morton pitched seven innings of three-hit ball, Jose Altuve had a three-run double and the Houston Astros beat the Seattle Mariners 9-2 on Thursday after Evan Gattis hit into a bizarre 5-4-3 triple play in the fourth inning.

Morton (3-0) retired 15 straight during one stretch and didn't allow a runner to reach second base.

Marco Gonzales (1-2) allowed three runs - all unearned because of a throwing error by third baseman Kyle Seager - and four hits in 4 2/3 innings.

J.D. Martinez and Rafael Devers also drove in runs during the seventh consecutive victory by the major league-leading Red Sox, who have won 16 of 17 since losing on opening day.

Boston's 11 homers off the Angels are the franchise's most in a three-game series since 1977. The Red Sox pounded out 43 hits and 27 runs in 27 innings at the Big A, continuing their torrid start to manager Alex Cora's debut season.

Chris Young homered for the Angels, who started the season 13-3 before running into the Boston buzzsaw.

Shohei Ohtani went 0 for 4 with three strikeouts as the Angels' designated hitter in his first action since taking his first career loss on the mound Tuesday. Although he's still batting .324, the two-way rookie struggled while moving up to sixth in manager Mike Scioscia's lineup.

Betts opened the series with a homer off Ohtani on Tuesday night, going on to a three-homer game. He added another homer off Nick Tropeano (1-1) in the series finale, giving him six this season.

CHICAGO (AP) - Jon Lester (2-0) was dominant through six innings of two-hit ball in his 100th start with the Cubs, and Jason Heyward hit a two-run homer.

Kris Bryant and Kyle Schwarber each had two RBIs as Chicago took a 6-1 lead after two innings. Every Cubs starter had a hit, including three by Anthony Rizzo and two each by Heyward, Schwarber and Javier Baez.

Brandon Morrow pitched a perfect ninth to complete a five-hitter and remain perfect in three save chances.

Jordan Zimmermann (1-0) gave up four runs and seven hits in 5 1/3 innings, allowing two home runs to Manny Machado and one to Chris Davis.

NEW YORK (AP) - Aaron Judge hit his fifth home run for a 4-2 lead in seventhm and David Robertson pitched out of an eighth-inning jam.

CC Sabathia allowed two unearned runs over 4 1/3 innings in his first start since straining his right hip on April 6. Chad Green (1-0) retired five straight batters, Dellin Betances pitched a perfect seventh and Robertson delivered a lead to Aroldis Chapman, who struck out the side on 12 pitches for his third save, twice topping 100 mph.

Giancarlo Stanton had an infield single to snap an 0-for-15 skid. He was 1 for 3 with a walk and is 4 for 38 with 20 strikeouts at Yankee Stadium this season.

Neil Walker sparked New York's two-run second inning by snapping an 0-for-16 skid with a double off the right-field wall. He scored on a single by Ronald Torreyes.

PHILADELPHIA (AP) - Jake Arrieta (2-0) struck out 10 and tossed one-hit ball over seven innings. Yacksel Rios allowed a hit in the eighth and Victor Arano finished the two-hitter with a perfect ninth.

Rhys Hoskins homered and Cesar Hernandez had a three-run single.

ATLANTA (AP) - Preston Tucker drove in a career-high five runs, and Matt Wisler (1-0) allowed one run two hits in seven innings after being called up from the minors.

Kurt Suzuki had three hits and drove in three runs, including a two-run homer in the first off Matt Harvey (0-2), who allowed six runs and eight hits in six innings.

MILWAUKEE (AP) - Lorenzo Cain homered, doubled twice and scored four times, and pinch-hitter Ryan Braun launched a three-run homer that gave him 1,000 RBIs. The Brewers erased a 3-2 deficit with three runs in the fifth inning and added seven in the sixth.

Slumping outfielder Lewis Brinson, acquired from Milwaukee in the offseason trade for Christian Yelich, celebrated his return to Miller Park with his first two homers of the season for Miami.

Brad Boxberger got Belt to pop out with two on in the ninth inning for his fifth straight save to open the season, a night after allowing the go-ahead homer to Belt in the 10th.

A.J. Pollock hit a solo homer off Ty Blach (1-3), and Ketel Marte also had a solo shot to help the Diamondbacks take two of three from the Giants. Arizona had never opened a season with more than two straight series wins.