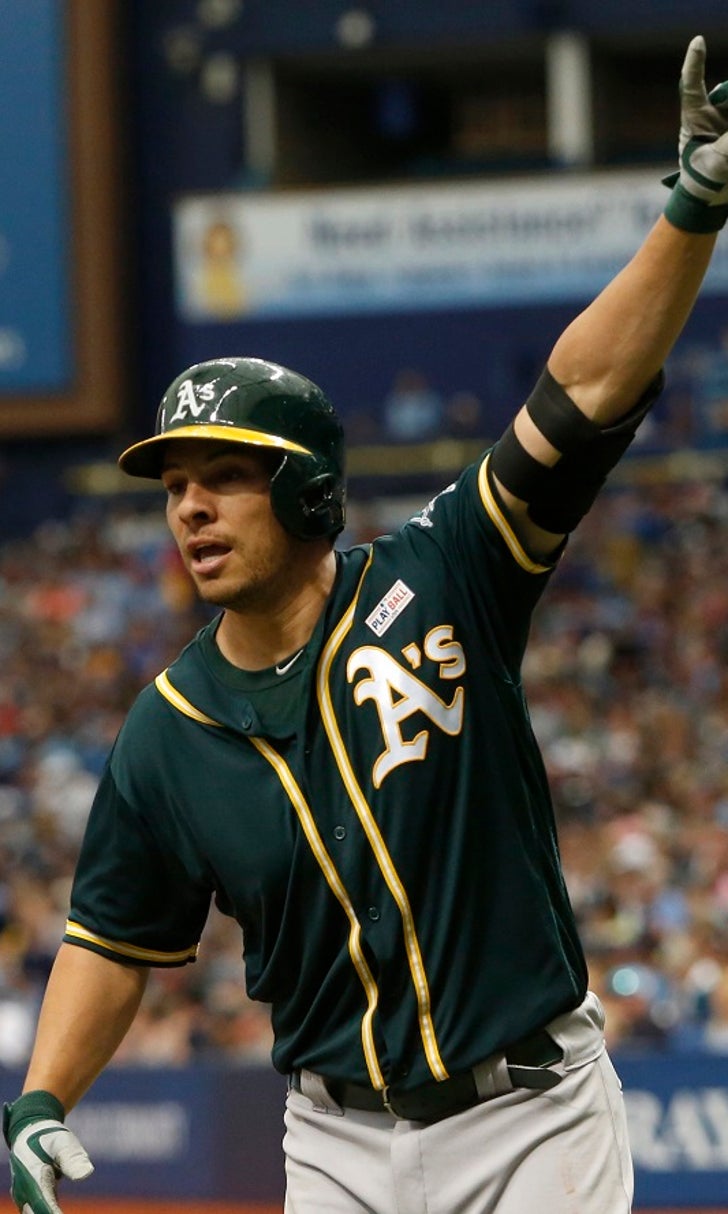 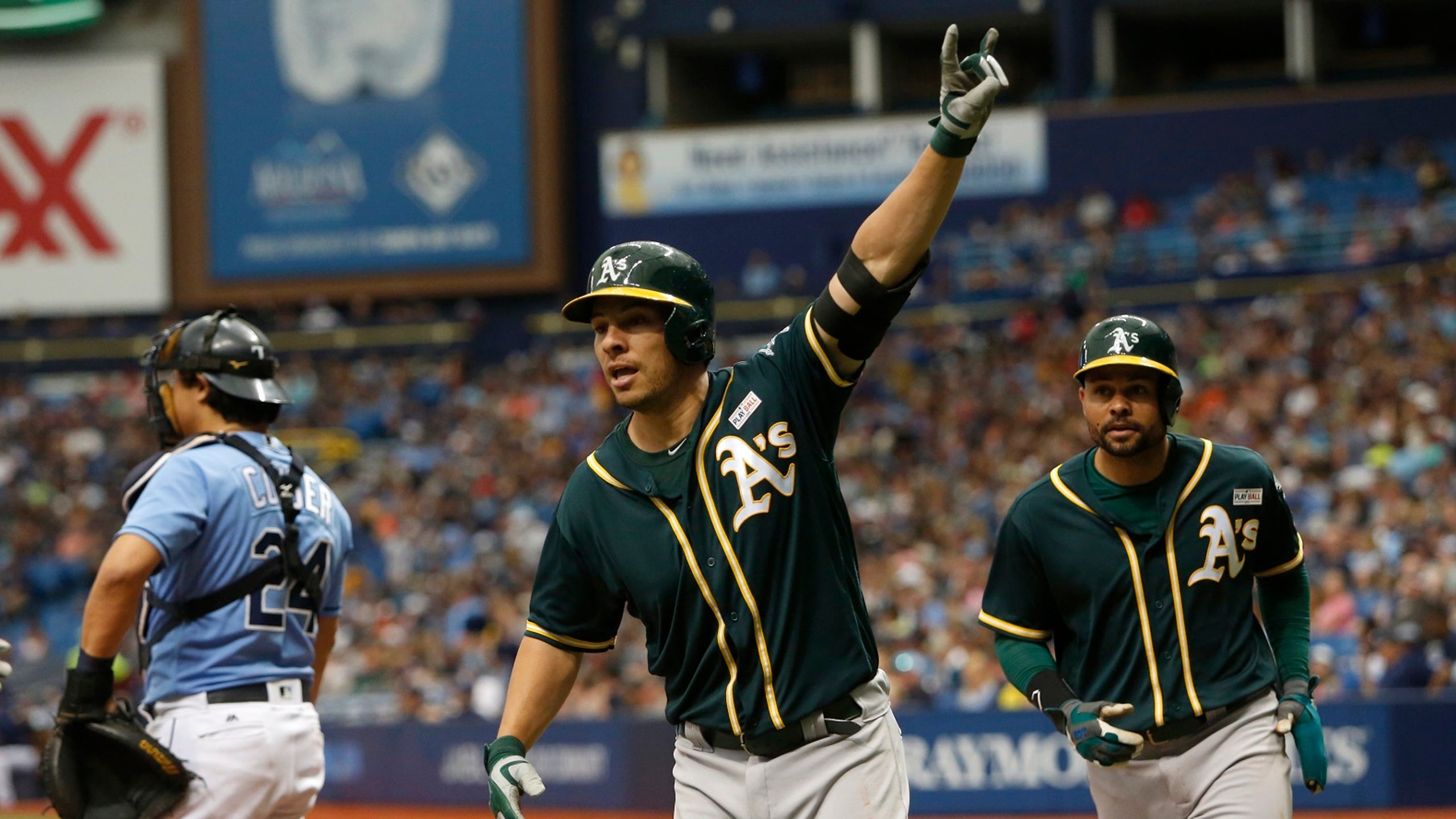 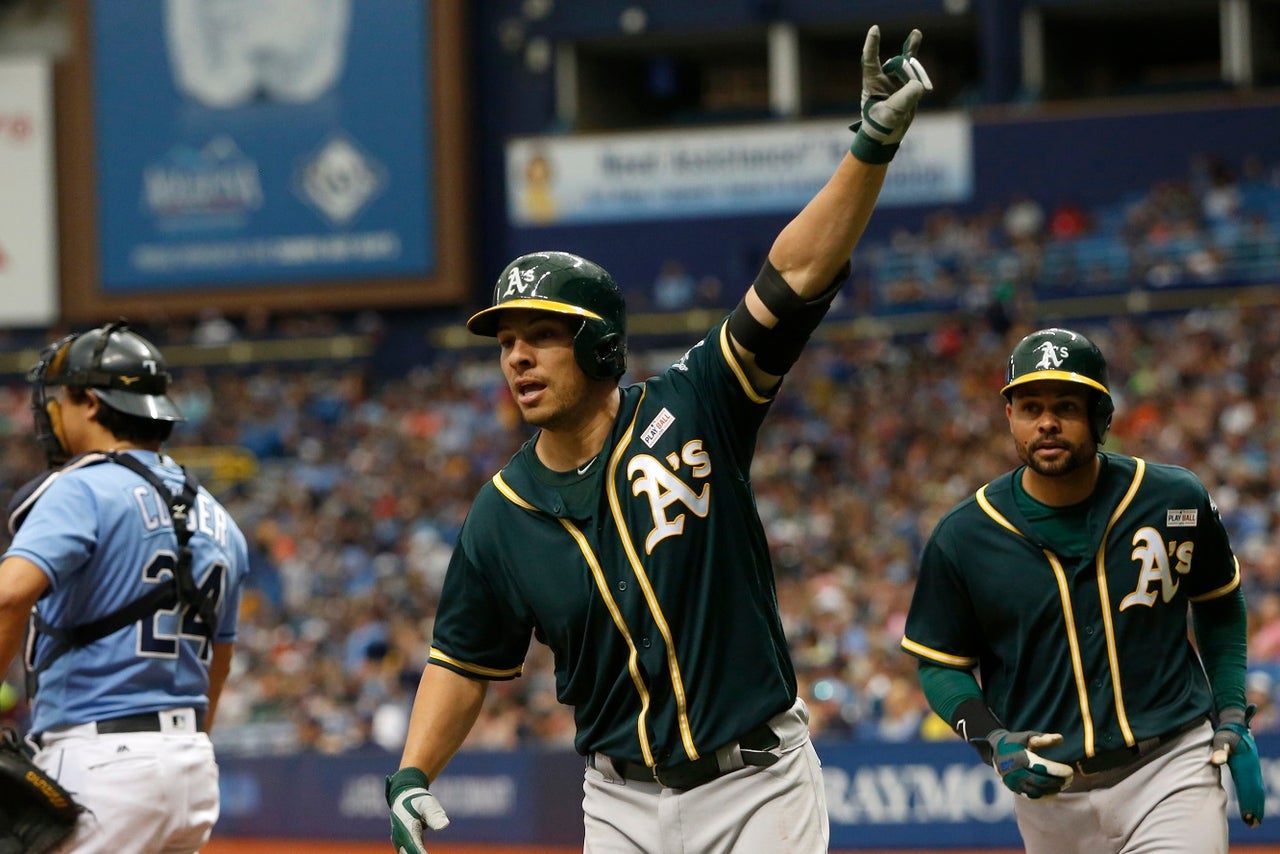 ST. PETERSBURG, Fla. -- When Danny Valencia came to the plate with a runner on in the ninth, the Oakland Athletics were one confident bunch.

"It wasn't `Let's hope he hits another one.' It was `He's hitting another one right here,'" catcher Stephen Vogt said.

Sure enough, Vogt and company were right.

Valencia's third home run of the day lifted Oakland to a 7-6 victory over the Tampa Bay Rays on Sunday. Valencia's final homer -- his fifth of the season, with each of them coming in the weekend series -- came on the first pitch from Steve Geltz (0-2).

"I felt pretty good in the whole series, really," said Valencia, who had been limited for much of the spring by a strained left hamstring. "I got some good pitches to hit and I didn't miss `em. It's just one of those days, one of those experiences. I've never done that before."

John Axford (3-1) pitched an inning for the win and Ryan Madson got three outs on four pitches for his 10th save.

Guyer homered in each of the first two innings off Sonny Gray. The second homer, Guyer's fourth of the season, came with two men on base after a two-out error on second baseman Tyler Ladendorf.

"We had a few things not go our way and I just wasn't able to pick it up when I needed to," said Gray, who is 0-3 in his last four starts.

Rays starter Matt Moore gave up four runs and seven hits in five innings, striking out three. He yielded Valencia's first two homers, and the third one kept Moore from winning for the first time in five starts.

"I definitely felt like I still had a lot of work left to go," Moore said. "I felt better than the four runs I gave up."

Coco Crisp had three hits for the A's, who won for only the third time in 11 games in May.

Valencia joined Lorenzo Cain, Aaron Hill and Andrew McCutchen as the only major league players with three-homer games this season. Valencia is batting .405 during his 10-game hitting streak, which is one game short of his career high.

Chris Coghlan's pinch-hit home run in the seventh was the first for Oakland since John Jaso accomplished the feat on June 22, 2014, ending a streak of 285 games without a pinch-hit homer.

Athletics: INF Jed Lowrie (right shin contusion) hit off a tee Saturday, resuming baseball activities. He is eligible to be reinstated from the disabled list on May 25. . . . Vogt took a bounced pitch directly on his thumb, but an X-ray was negative.

Rays: RHP Brad Boxberger (adductor surgery) pitched one inning for Class A Port Charlotte in his first rehab appearance. He gave up a hit and struck out one.

Athletics: LHP Sean Manaea (0-1) will face the Texas Rangers on Monday in Oakland, opening a three-game series in which all six scheduled starters are lefties.

Rays: LHP Drew Smyly (1-4) will open a seven-game road trip Monday by facing the Toronto Blue Jays for the third time this season.