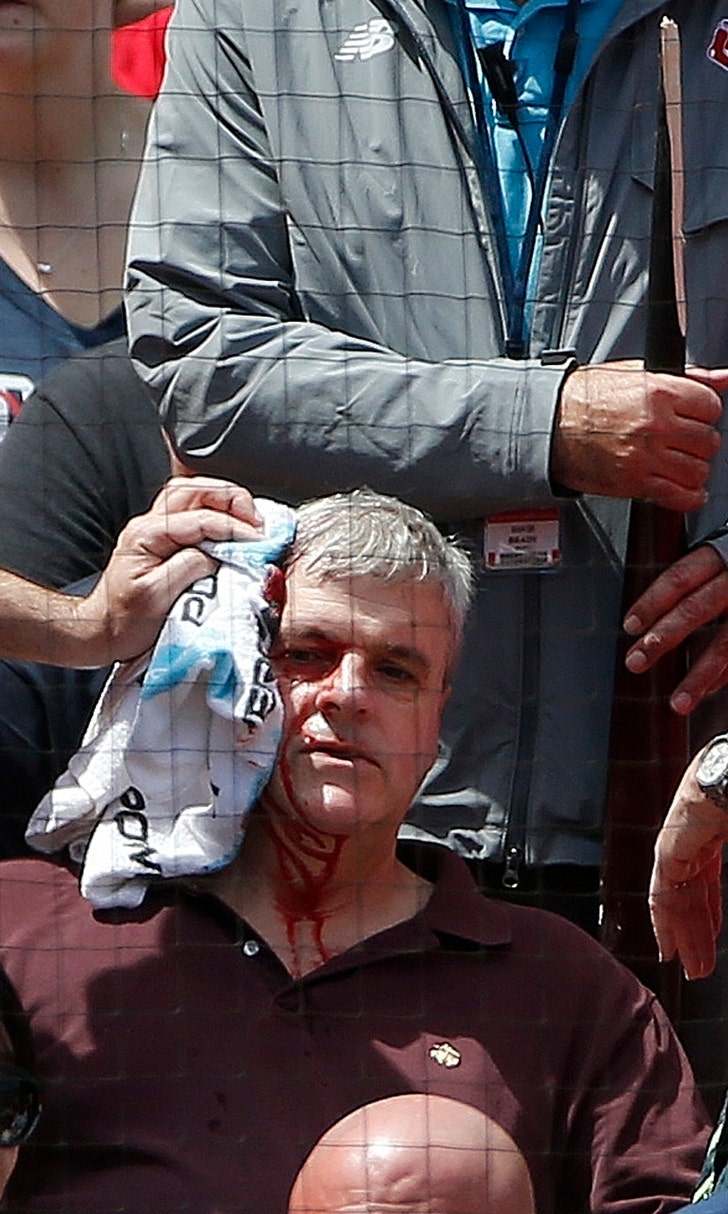 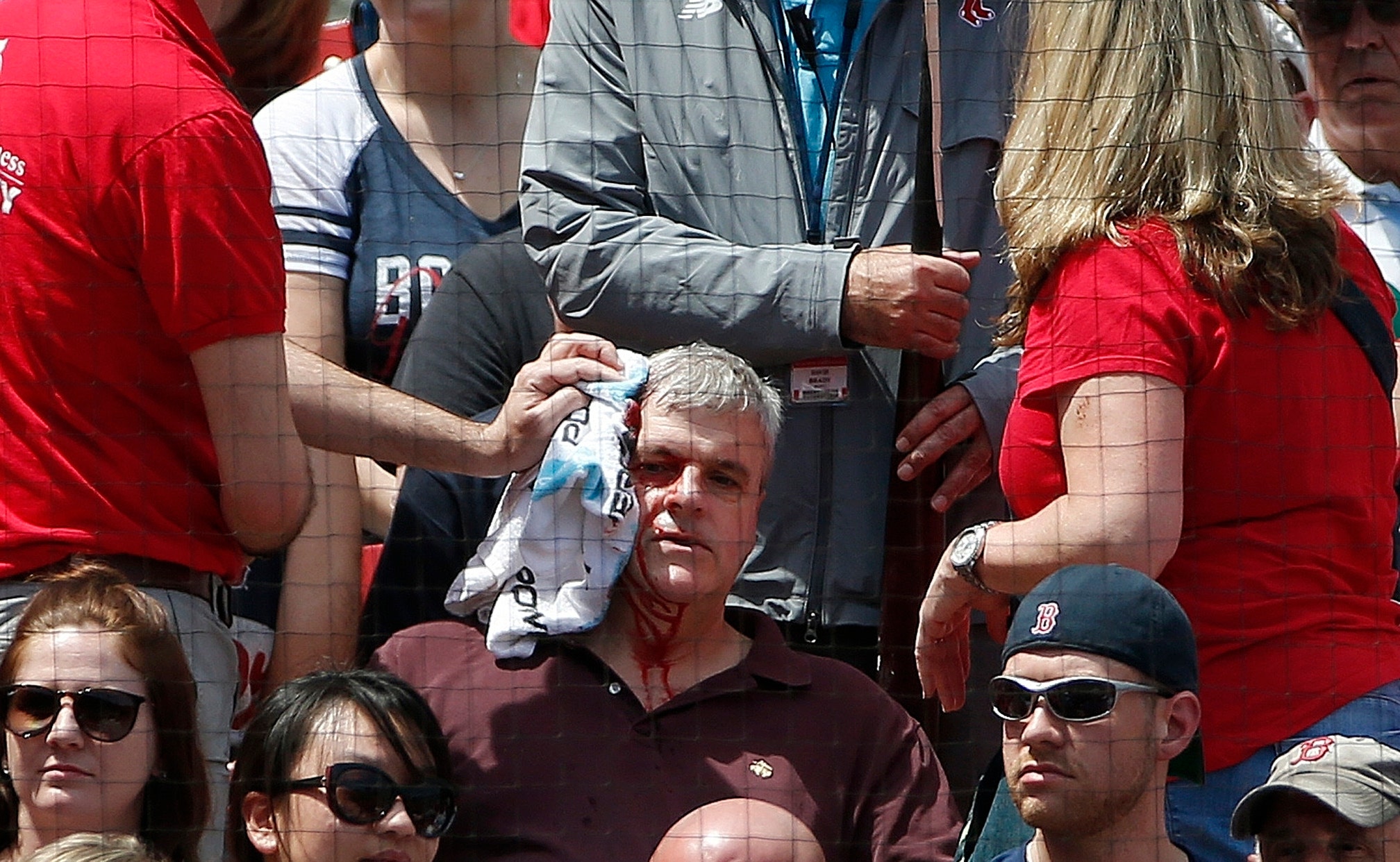 Column: MLB needs to protect its fans at every ballpark

ATLANTA (AP) — There's always a surge of excitement when a foul ball comes your way, mixed with a sense of dread.

It's a thrilling souvenir to take home from the ballpark.

Yet too many fans have been left bloody and maimed by these projectiles hurtling into the stands.

One person even died.

But, for some reason, Major League Baseball is playing a dangerous game by dragging its feet on requiring all teams to put up protective netting from foul pole to foul pole.

"I think everybody that's got a uniform on would like to see that," Atlanta Braves manager Brian Snitker said. "You look up there, you can't even see the nets. I've got to think once people get there and start watching the game, they won't even notice it."

Commissioner Rob Manfred is leaving it to the individual teams to decide what should be done, saying there's no one-size-fits-all solution given the different dimensions of each ballpark. We can also safely assume that MLB is doing a cost-benefit analysis, given that extra netting would have to be installed in front of some of the best seats in the stadium, which might make them harder to sell if fans believe their view is obscured.

Given the attendance woes that baseball already is facing, the owners are sure to be resistant to any changes that might further cut into their bottom line.

You know what's a potentially bigger drag on attendance?

Watching someone being hauled out of the stadium on a stretcher, blood pouring from their head after being struck by a ball that left the bat at more than 100 mph.

No one will forget that excruciating scene in May, when Chicago Cubs outfielder Albert Almora Jr. sent a screamer into the stands that struck a 4-year-old girl. He immediately put his hands on his head and took a couple of steps toward the stands. Then, he sank to his knees near home plate, breaking down as he was consoled by teammate Jason Heyward and manager Joe Maddon.

"Right now, obviously, I want to put a net around the whole stadium," Almora said.

Some teams have already moved in that direction.

Over the All-Star break, the Chicago White Sox became the first team to extend the netting all the way down each foul line after a liner at Guaranteed Rate Field opened up a bloody gash on a female fan's head, sending her to the hospital. The Washington Nationals followed suit, and several teams, including the Baltimore Orioles, Los Angeles Dodgers and Toronto Blue Jays, have announced they will extend their netting by the 2020 season.

That's a good start, but MLB should order all 30 teams to install the extra protection as soon as possible. No need to wait until next season if it can be done now.

And while we're at it, pass along the same edict to all minor league affiliates, which have been overlooked in this debate but where fans are just as much at risk.

Last season, a 79-year-old woman was struck in the head by a foul ball at Dodger Stadium and died four days later, though news of her death didn't come out until February. Linda Goldbloom was reportedly sitting in the second level of the stadium when she was struck by a ball that sailed over the netting.

It's not clear what measures could've been taken to prevent her death.

But we do know something can be done for those who sit close to the field with no protection.

Remembering his days as a third-base coach, Snitker said, "I stopped watching balls go in the stands ... because I did not want to turn around and see a young kid get hit. Because I did a couple of times. It makes you sick to your stomach to see that."

After several fans were injured by foul balls during the 2017 season, MLB ordered teams to extend the netting behind home plate to the far edge of each dugout.

But there are still far too many fans in the line of fire, especially when there's clearly a greater risk of being seriously injured these days.

The players are bigger and stronger. The pitchers are throwing harder. Every hitter in the lineup is swinging for the fences. There is speculation that the ball is livelier than it once was, which only increases the danger.

Stadium design is another factor. The stands are much closer to the field in pretty much every new ballpark that has gone up in recent years, in both the majors and minor leagues. Not to mention the times we live in, where attention spans are short and fans are mesmerized by the glare of their smartphones rather than keeping an eye on the batter's box.

During a recent Braves game at SunTrust Park, where the netting only meets the minimum MLB requirements, I watched a couple of innings from unprotected seats along both the first- and third-base lines. While many kids were wearing gloves in hopes of catching a foul ball, and plenty of fans were locked in on the game, it was astonishing to see how many weren't paying a lick of attention.

They were texting on their phones, or watching the giant video boards, or yukking it up with their friends, or flagging down the constant stream of vendors going up and down the aisles, peddling soft drinks and beer and popcorn.

Only once did a foul ball even come in my vicinity, but the reaction of the crowd made it clear that plenty were caught off guard. A rising cheer from fans suddenly leaping from their seats, hoping to grab one of the prized souvenirs, was offset by a bit of a gasp from those who weren't watching the swing but merely reacting to those around them.

"There's all sorts of things going on," Braves catcher Tyler Flowers said. "It's a challenge to be attentive for an entire game, especially when you're talking about kids. There's no way they're going to be paying attention the whole game. C'mon, it's boring between pitches."

One fan, sitting alongside his 8-year-old grandson in prime seats down the first-base line, said there are pros and cons to extra netting.

"The screen cuts down on the visualization out there. It makes you a little bit distant from the game," said the fan, who would only give his name as Jeff. "But it's certainly a protector. I've seen too many examples of people getting hit with bats, much less balls."

Glancing over at his grandson, he said it's time for baseball to come down on the side of safety.

"I've got a little guy here," he said. "A couple of balls already came out here. His father is on that side and I'm on this side. We're kind of keeping an eye on him just in case."

C'mon, baseball, there's no need for this carnage.

Do the right thing.

Before someone else dies.