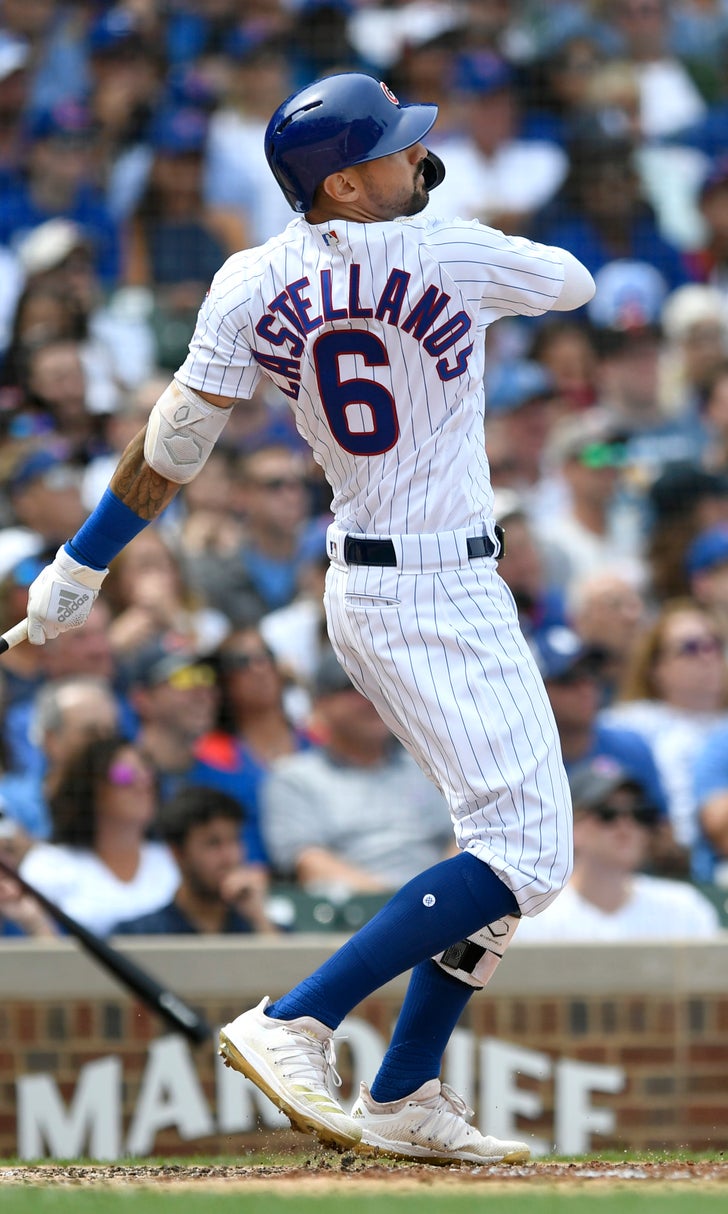 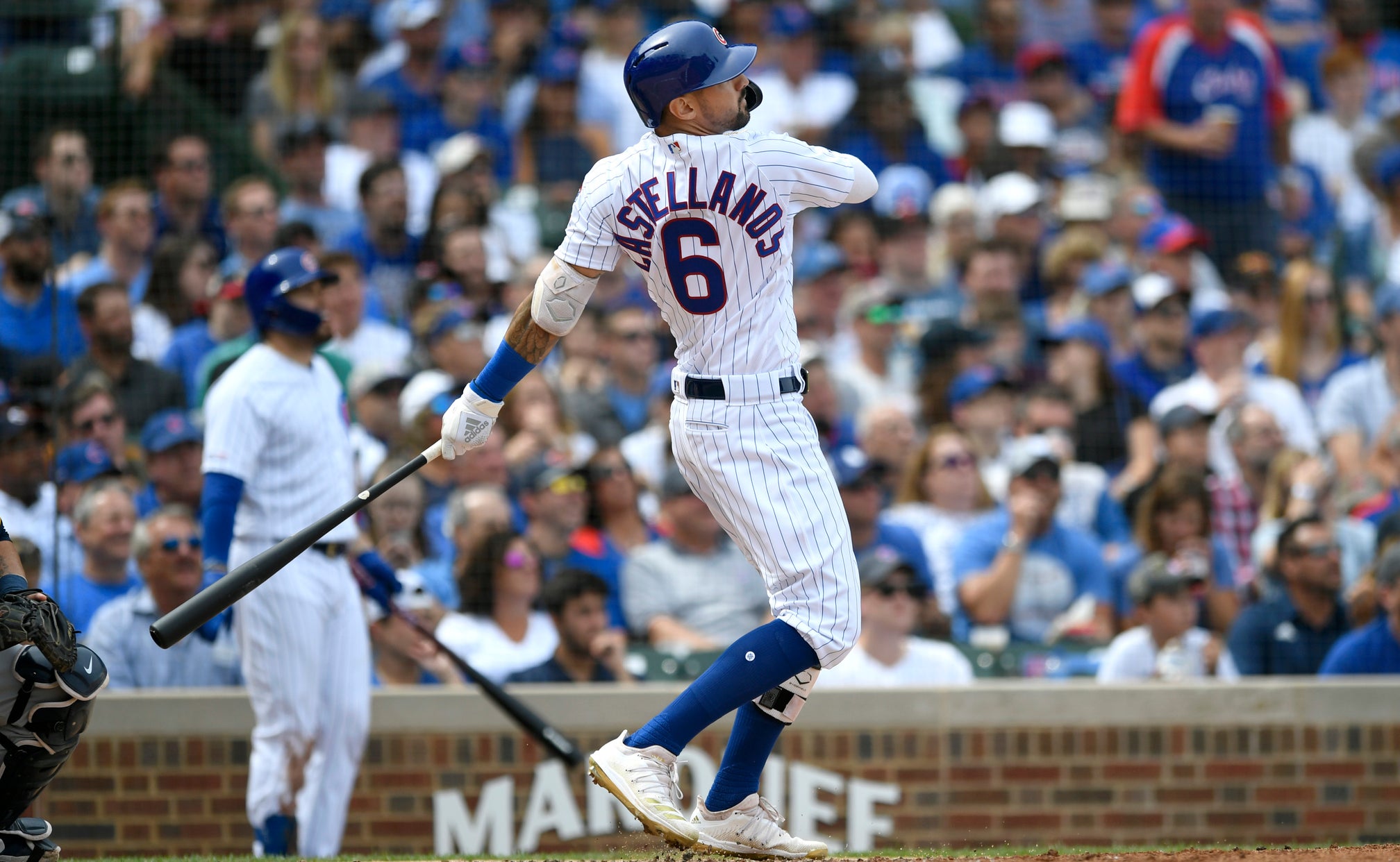 CHICAGO (AP) — Nicholas Castellanos has been in quite a hitting groove since joining the Chicago Cubs.

Castellanos hit a pair of two-run homers, José Quintana took a shutout into the sixth inning, and the Cubs cruised to their fourth straight win, 7-1 over the Milwaukee Brewers on Friday.

Castellanos, who went deep off Chase Anderson in each of his first two at-bats, has 11 homers in 27 games and is batting .357 since being acquired from Detroit a the trade deadline. It was his second multi-homer game this season — both with the Cubs — and sixth of his career.

Moving from the lowly Tigers and spacious Comerica Park to the contending Cubs and the friendly confines of Wrigley Field has helped lift Castellanos' mood and production over the past month.

"I don't consider myself really anything other than just somebody who loves to hit and swing hard."

Castellanos' emotions bubbled over on his second homer, a drive deep to left in the second on a 2-1 pitch that made it 5-0. As he exited the batter's box, Castellanos glanced to the Cubs dugout, lifted his bat over his head with two hands and slammed it into the ground with delight before sprinting around the bases.

"That's just how I felt expressing myself in that moment, looking into the guys and doing what I did," Castellanos said.

Kyle Schwarber added his team-leading 32nd homer, and third in five games, in the eighth.

The Brewers dropped their fourth game in five and fell to five games behind the Cubs, who hold the second wild-card slot. It was the first of seven meetings between the NL Central rivals in their next 10.

Chicago began the day 1 1/2 games behind first-place St. Louis in the NL Central, and 2 1/2 games back of Washington in the first wild-card spot.

Manager Joe Maddon said his team came out with energy, despite arriving in Chicago at about 2:30 a.m. following a 4-1 win over the Mets in New York on Thursday. Castellanos helped fuel it.

"He plays the game the right way," Maddon said. "The word is joy. I think he's just got a joy for the day. He's always upbeat."

Quintana (12-8) rebounded after being roughed up by Washington last week. The left-hander allowed four hits and walked two before being relieved by David Phelps with two outs in the sixth.

Quintana also drove in a run with a double, the first extra-base hit of his career. Victor Caratini had two hits and an RBI.

Anderson (6-4) allowed five runs in the first two innings, then lasted only through the fourth while allowing seven hits.

"It didn't go well from the start," Brewers manager Craig Counsell said. "They jumped on him. Unfortunately he made some poor pitches in the game and they were ready to go."

Manny Piña had three hits and singled in the Brewers' only run off Pedro Strop in the eighth.

Two Cubs regulars, Kris Bryant and Jason Heyward, were rested and didn't start. Bryant pinch hit in the eighth and struck out.

Ian Happ doubled to lead off the bottom of the first, then Castellanos followed with a two-run shot to left.

David Bote and Quintana smacked consecutive doubles to the left-center gap by with one out in the second to increase Chicago's lead to 3-0.

Castellanos went deep again one out later to make it 5-0.

Brewers: Brewers 2B Keston Hiura left the game in the sixth with left hamstring discomfort and will return to Milwaukee to be evaluated. ... Counsell said 3B Mike Moustakas is progressing since leaving Monday's game with pain in his left palm and wrist after being struck by hard-hit groundball, but had no date for his return. ... All-Star RHP Brandon Woodruff (strained left oblique) threw off a mound before Friday's game. He hasn't pitched since July 21. ... Counsell expects LHP Brent Suter and RHP Jimmy Nelson to rejoin the team this weekend. Suter underwent Tommy John surgery in July 2018 and Nelson had right shoulder surgery after a baserunning mishap at Wrigley Field in 2017.

Cubs: 1B Anthony Rizzo (back tightness) sat out his fifth straight game. ... C Willson Contreras (strained right hamstring) was scheduled to begin a rehab assignment behind the plate for Triple-A Iowa on Friday night. He's been sidelined since Aug. 3.