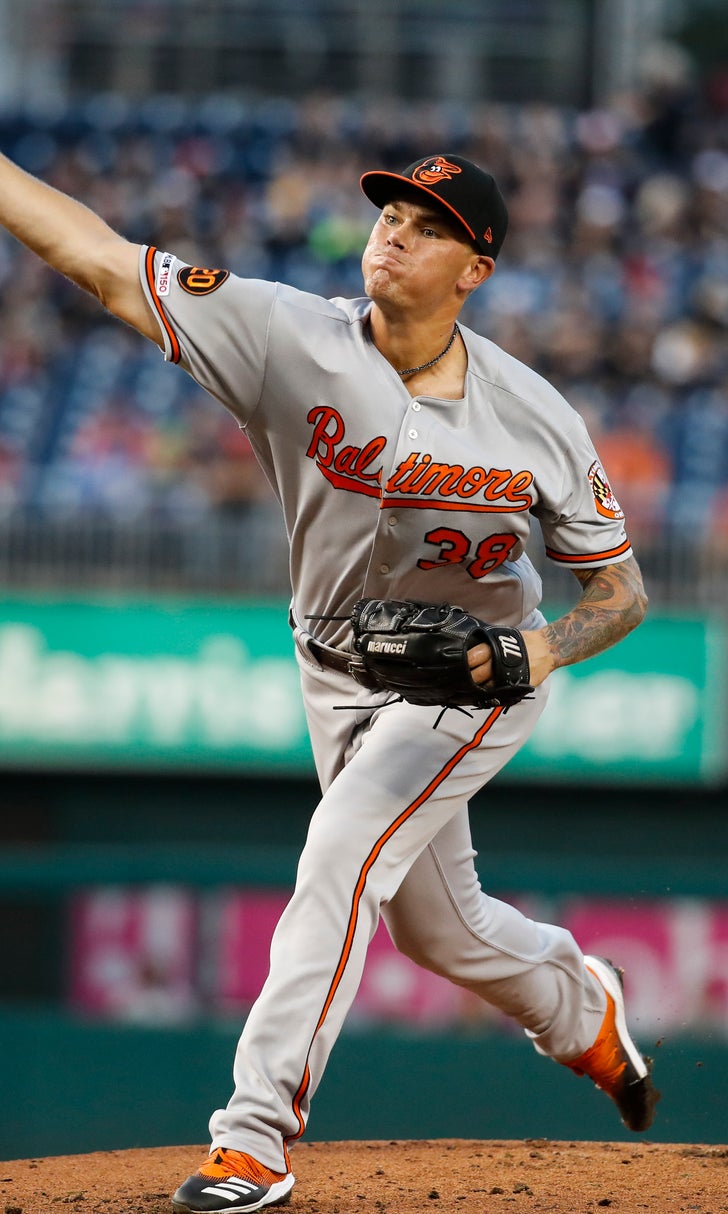 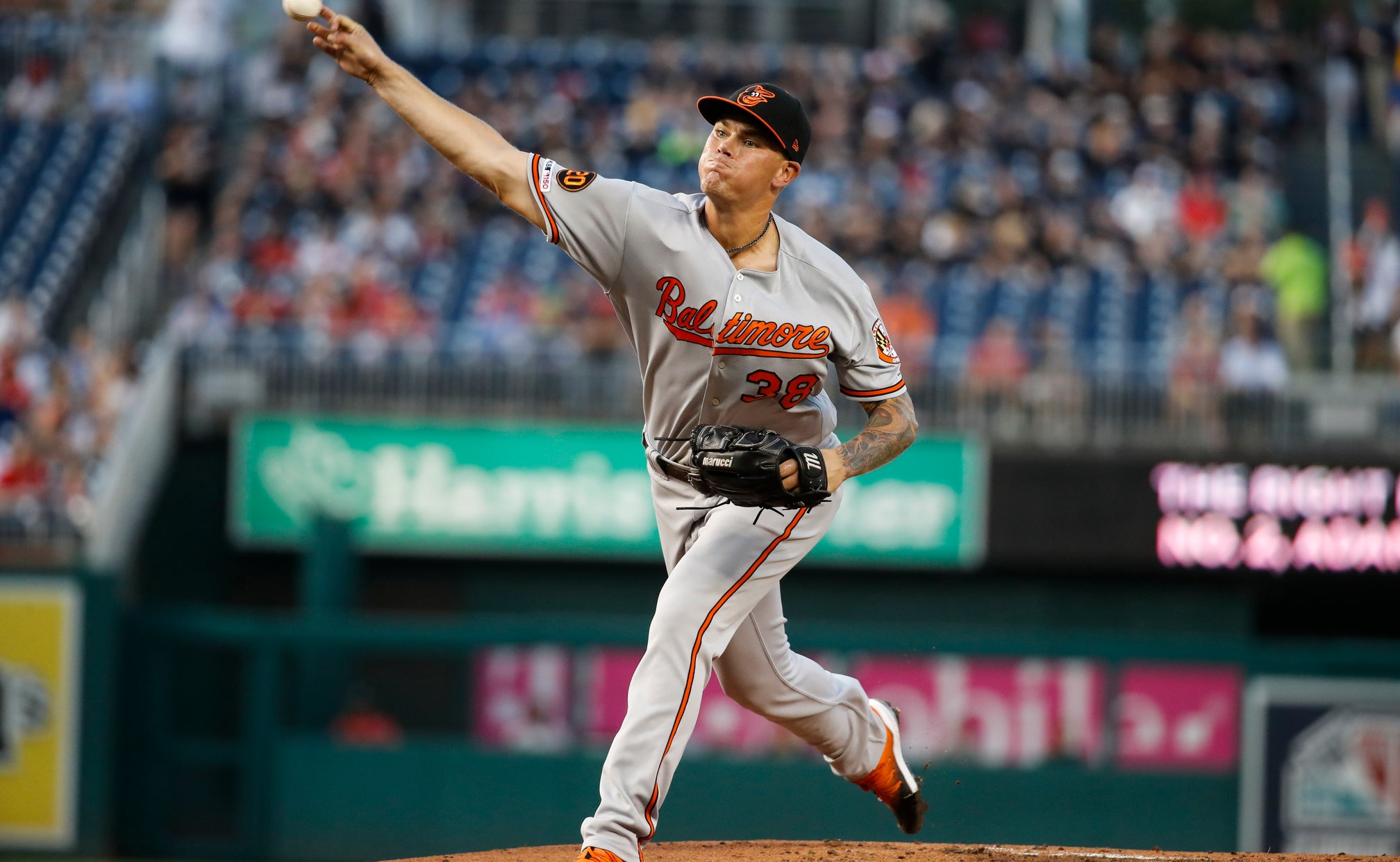 WASHINGTON (AP) — The Washington Nationals had gotten quite used to banging around the baseball and circling the bases, so they were understandably startled when their bats were rendered useless by Aaron Brooks and the Baltimore bullpen.

Brooks pitched a gem against the torrid-hitting Nationals, throwing six innings of two-hit ball Tuesday night to help the Orioles to a 2-0 victory that ended Washington's five-game winning streak.

The Nationals were coming off a weekend sweep of the Chicago Cubs and had won 12 of 14 to take control of the NL wild-card race before getting upended by the neighboring, last-place Orioles.

"We didn't hit," manager Dave Martinez said. "Aaron Brooks kept us off balance all night and couldn't score a run."

Brooks (4-7) took the mound with a 6.21 ERA and was facing a team averaging 9 ½ runs over its last 11 games. The right-hander allowed just four baserunners and struck out six, including four in a row bridging the first and second innings.

Rookie Hunter Harvey entered in the eighth for the fourth time since making his debut on Aug. 17. After Trea Turner hit a one-out triple, Harvey struck out Adam Eaton, walked Anthony Rendon and Juan Soto to load the bases and fired a few fastballs around 100 mph before striking out Asdrubal Cabrera .

It was the kind of performance the Orioles were looking for when they drafted him in the first round of the 2013 draft.

"When you throw 99 and it sounds like a vacuum cleaner going by me, it's pretty serious heat," Eaton said.

Mychal Givens, the last of four Orioles relievers, got three straight outs to complete the four-hitter and earn his 11th save.

"It's a great win, no doubt about it," Baltimore manager Brandon Hyde said. "That's a really good ballclub, a playoff ballclub that's the hottest team in baseball right now. To be able to come in and put zeroes up for nine innings, it's a testament to our pitchers."

Brooks and the Baltimore bullpen outpitched Patrick Corbin (10-6), who gave up two runs and four hits in seven innings with nine strikeouts. The left-hander was 5-0 in 12 starts since June 11.

Corbin came in with a 1.76 ERA at home and promptly gave up two first-inning runs. Hanser Alberto opened the game with a single on the first pitch and Corbin hit Trey Mancini in the foot with a slider before Anthony Santander doubled in a run and Jonathan Villar delivered a sacrifice fly.

It was hard to imagine at the time, but that would be enough offense to defeat a club that totaled 41 runs during its five-game winning streak and had not been blanked since June 13.

Turner and Victor Robles each had two hits for Washington.

"It's not easy to flush," Martinez said of the defeat. "I'll go home and watch the game."

The last time the Orioles took a shutout into the seventh inning was July 21, at home against Boston, behind Asher Wojciechowski. That was 34 games ago.

If the Orioles rebuild is to be successful, most of the stars will come from their minor league system. One of Baltimore's top prospects, 22-year-old first baseman Ryan Mountcastle, has been chosen MVP of the International League. The 2016 first-round pick batted .308 with 25 homers and 80 RBIs over 121 games with Norfolk in his first season at the Triple-A level.

"We've had a lot of bright spots, good stories this year in our minor league system, and Ryan is obviously one of those," said Hyde, who offered no clue whether Mountcastle would be summoned when rosters expand next month.

Nationals: Closer Sean Doolittle (right knee tendinitis) will throw a simulated game Wednesday and if all goes well could be activated as soon as this weekend. ... Left-handed reliever Roenis Elías (left hamstring) had a bullpen session Tuesday. If he feels good Wednesday, he might pitch an inning in a simulated game, Martinez said.

Orioles: Mark Trumbo started a rehabilitation assignment with Norfolk in a last-ditch effort to play in the big leagues this season. He's been on the injured list all year while recovering from right knee surgery. The 33-year-old led the majors with 47 homers in 2016. ... Alberto started Tuesday after taking a knee to his head and neck Sunday while being tagged out at second base.