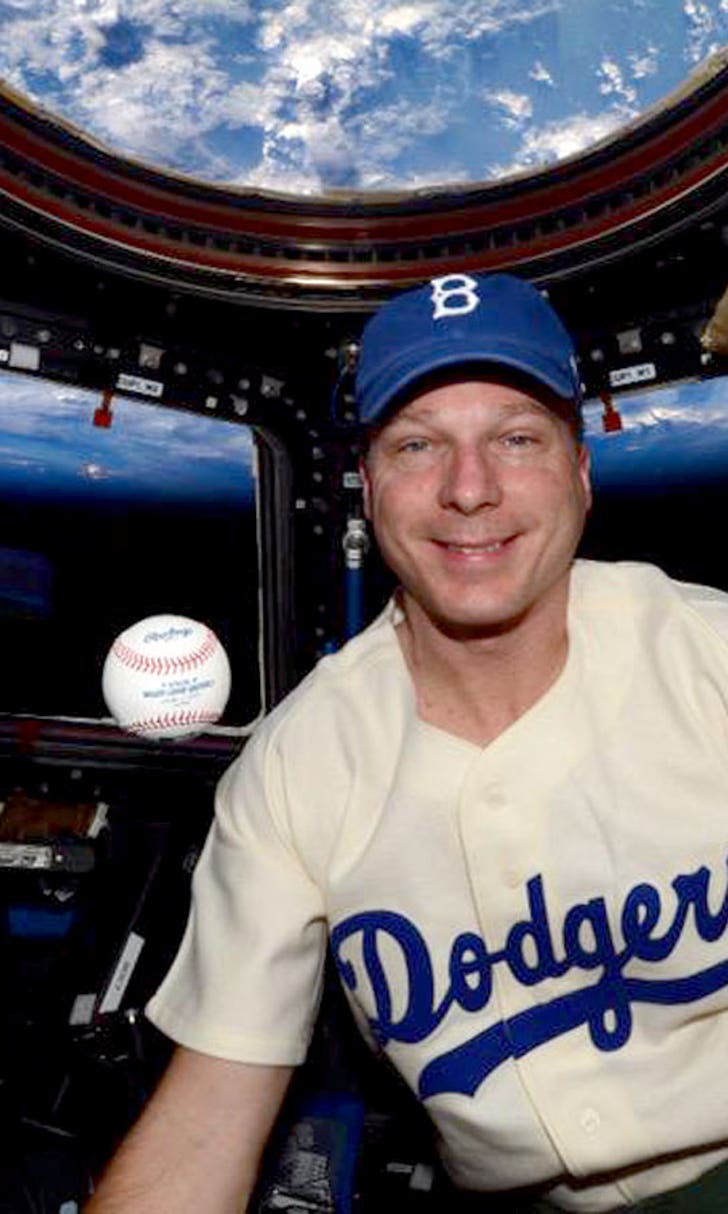 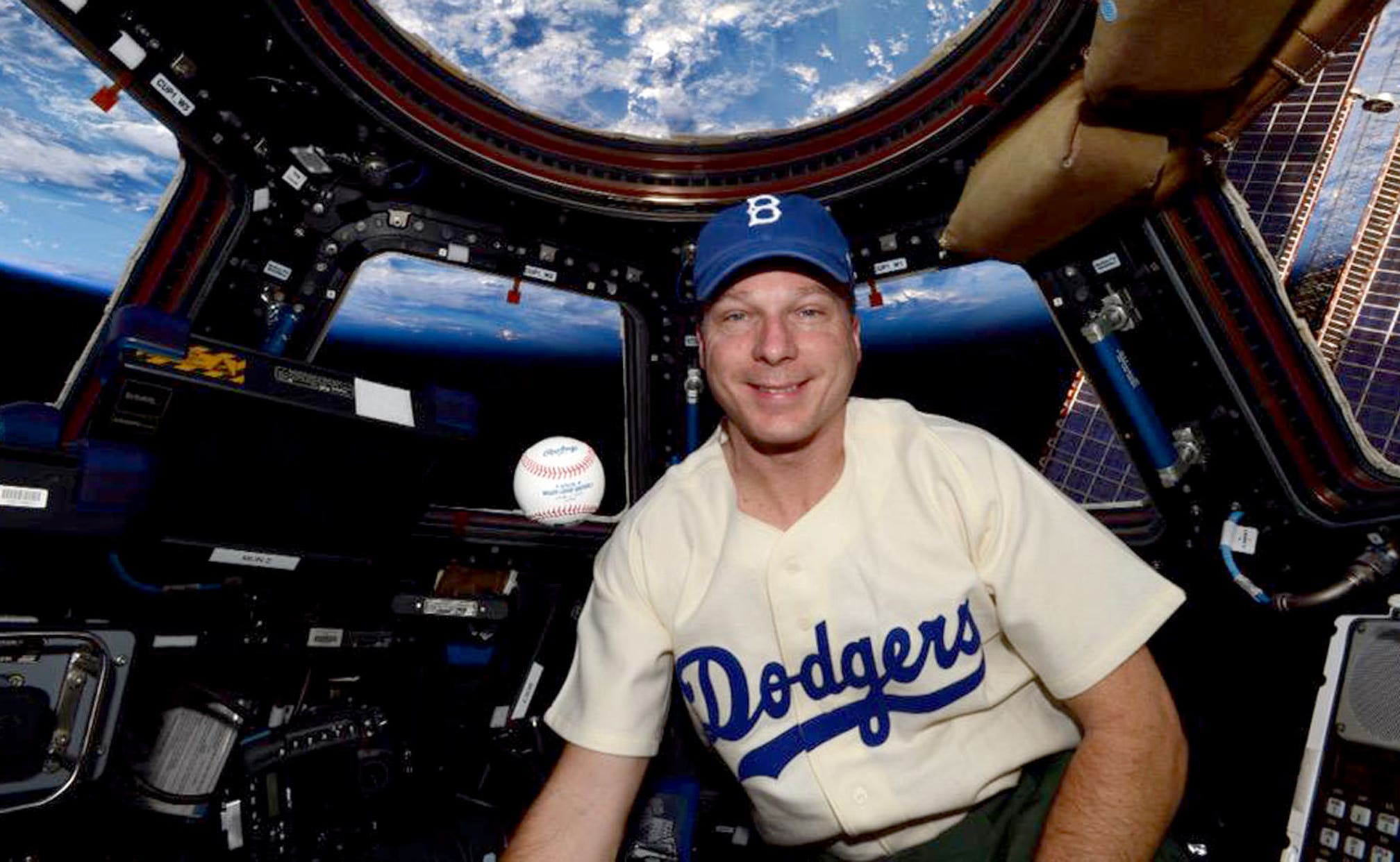 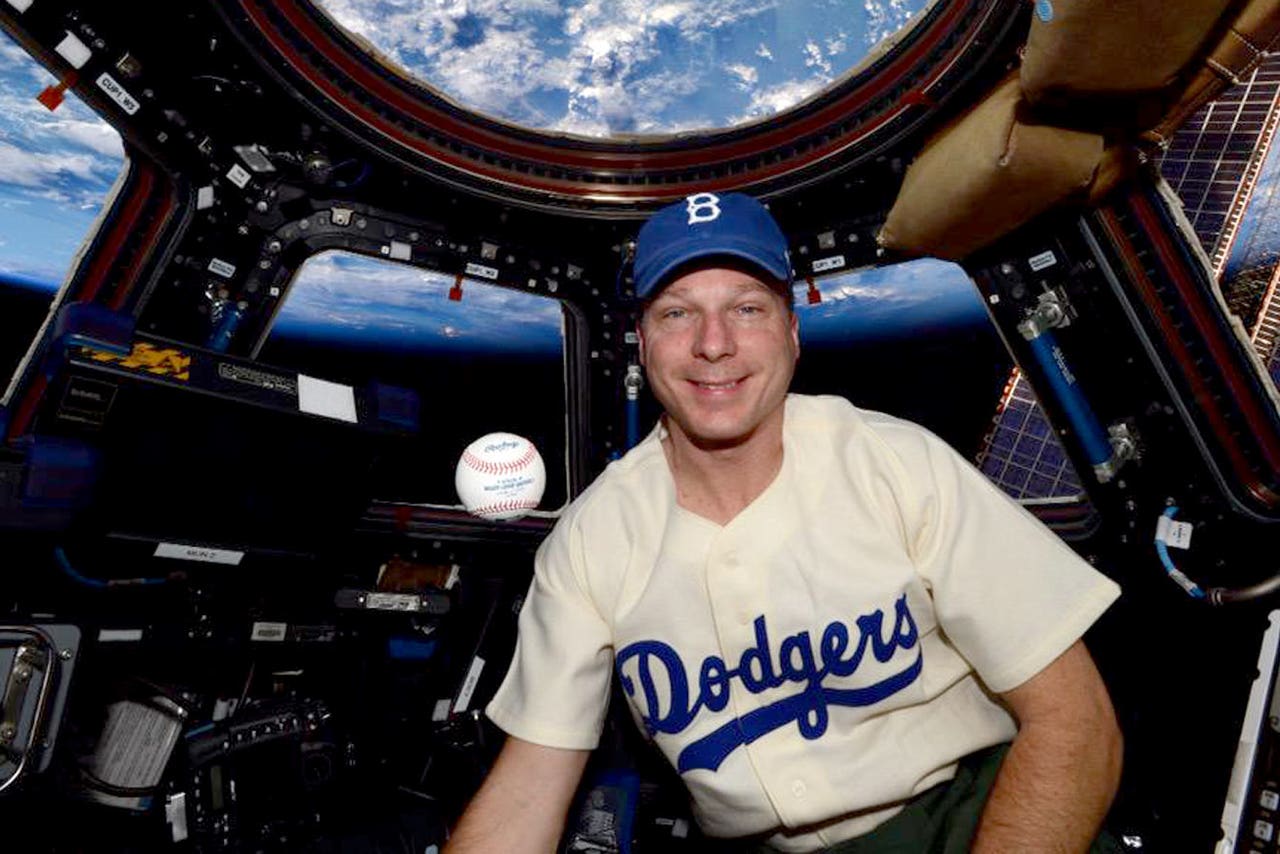 Jackie Robinson Day was celebrated even in space this year.

While Rachel Robinson, the player's 92-year-old widow, and Commissioner Rob Manfred honored Major League Baseball's first black player in a ceremony at Dodger Stadium on Wednesday night in conjunction with the annual Civil Rights Game, astronaut Terry Virts wore a Dodgers jersey with Robinson's No. 42 along with a Brooklyn cap at the International Space Station orbiting the Earth.

Wednesday marked the 68th anniversary of Robinson breaking the major league color barrier. His former team. the Dodgers, announced they will erect a statue of him at their ballpark.

"I can remember reading a book about Jackie when I was in the first grade," Virts said in a video posted on MLB.com. "Even at that young age, I was really impressed with what he did beyond baseball. Jackie, alongside his wife Rachel, opened up a world of opportunities that had been closed to so many Americans simply because of the color of their skin. What he did took courage, a lot of courage. He had to endure things that most of us could not imagine, and he had to do it while maintaining composure that most of us couldn't begin to muster."

Robinson's No. 42 was retired throughout the major leagues in 1997, with players already using the number grandfathered in. Yankees closer Mariano Rivera was the last player to wear it, in 2013. Then-Commissioner Bud Selig decided in 2005 that all teams would honor Robinson each April 15. Every major league player, manager and coach on the field wears No. 42 on the date.

"Jackie is the most historic figure who ever played the game, so it's fitting that we honor his legacy by adding the Civil Rights Game on the same day as Jackie Robinson Day," Manfred said.

Speaking at a news conference before the Dodgers hosted Seattle, Manfred and Rachel Robinson were flanked by Dodgers owner Magic Johnson and club President Stan Kasten, who announced that a statue of Robinson will be erected and placed on the stadium's grounds sometime this year -- although the location has yet to be determined.

"It's a true blessing for me to sit here with Rachel and understand what her husband has meant to changing society, changing the world and changing baseball," Johnson said, his eyes glistening. "I feel like he's still here -- his presence, his legacy."

Rachel Robinson, whose children also were in hand, was escorted to the pitcher's mound by Sandy Koufax. A video presentation was shown on the scoreboards behind the pavilions in left and right field. A No.42 was stenciled on the back slope of the mound and behind second base -- Robinson's position.

Most fans wore Dodgers jerseys with Robinson's number on the back, which they received as they entered the ballpark.

Robinson was a six-time All-Star, the 1947 major league Rookie of the Year and the NL MVP in 1949, when he won the league's batting title.

"Jackie was the only black man that I knew of at that time who could have done the job that he did -- and do it with the pride that he did it," former teammate Don Newcombe said. "That's why he was so respected. Martin Luther King came to my house one night for dinner 28 days before he died in Memphis. He said to me: `Don, I want you and Jackie and Roy Campanella and Larry Doby to know that without you, I would never have made it as successfully as I have in civil rights if it were not for what you men did on the baseball field.'"

In New York, Mets outfielder Curtis Granderson wore special spikes with Robinson's No. 42 on the side.

Opening-day rosters included 8.3 percent of players who identified as African-American, according to Richard Lapchick's Institute for Diversity and Ethics in Sport at the University of Central Florida. That was a slight increase from 8.2 last year, which equaled the study low set in 2007.

"We all recognize that there's a tremendous amount of athletes that are migrating to football and basketball," Red Sox manager John Farrell said. "Create more space in the inner cities is one possible way to do it."