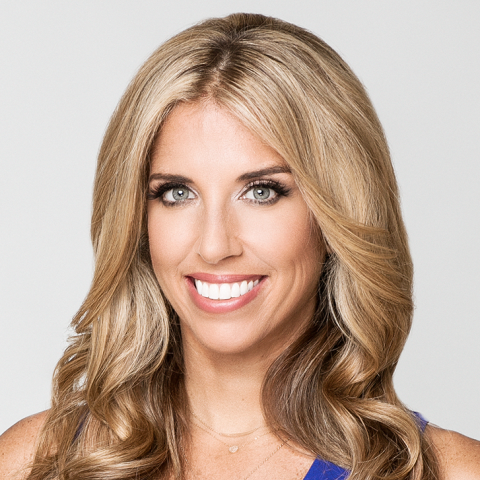 Sara Walsh joined the FOX Sports team in 2018 as an NFL sideline reporter with play-by-play announcer Kenny Albert and analyst Rondé Barber. She continues in that role in 2020, working alongside Dick Stockton and Brady Quinn. Walsh also contributes to the network’s college football and soccer coverage. In 2018, she served as a studio host for NASCAR RACE HUB: WEEKEND EDITION and Thursday NASCAR RACE HUB shows on FS1.

Prior to her move to ESPN, Walsh was the weekend sports anchor at WUSA-TV, the CBS affiliate in Washington, D.C., where she also served as the station’s Washington Redskins reporter. From 2003-2006, she was a sports reporter for WKRN-TV in Nashville and co-host of “Monday Night Live” with Coach Jeff Fisher. Walsh earned four regional Emmy Awards in three years while in Nashville.

She cut her broadcasting teeth as the sports director at WPGA-TV in Macon, Ga., from 2001-2003. Prior to TV, her journalistic career began as a sports writer for the “Beaches Leader” in Jacksonville, Fla.
Walsh grew up in Tampa, Fla., and graduated from the University of North Florida in 1999 with a Bachelor of Arts in communications. She holds the university record for most goals and points in a game.

While at Gulf High School in New Port Richey, Fla., Walsh excelled as a three-sport star, also playing volleyball and running track. She holds the school record for the 100-meter hurdles.

Walsh is married to Matt Buschmann, and the couple resides in Nashville with their twins, Hutton and Brees (born January 2017). In her spare time, Walsh enjoys horses, surfing and being near palm trees. You may follow her on Twitter at @Sara_Walsh.