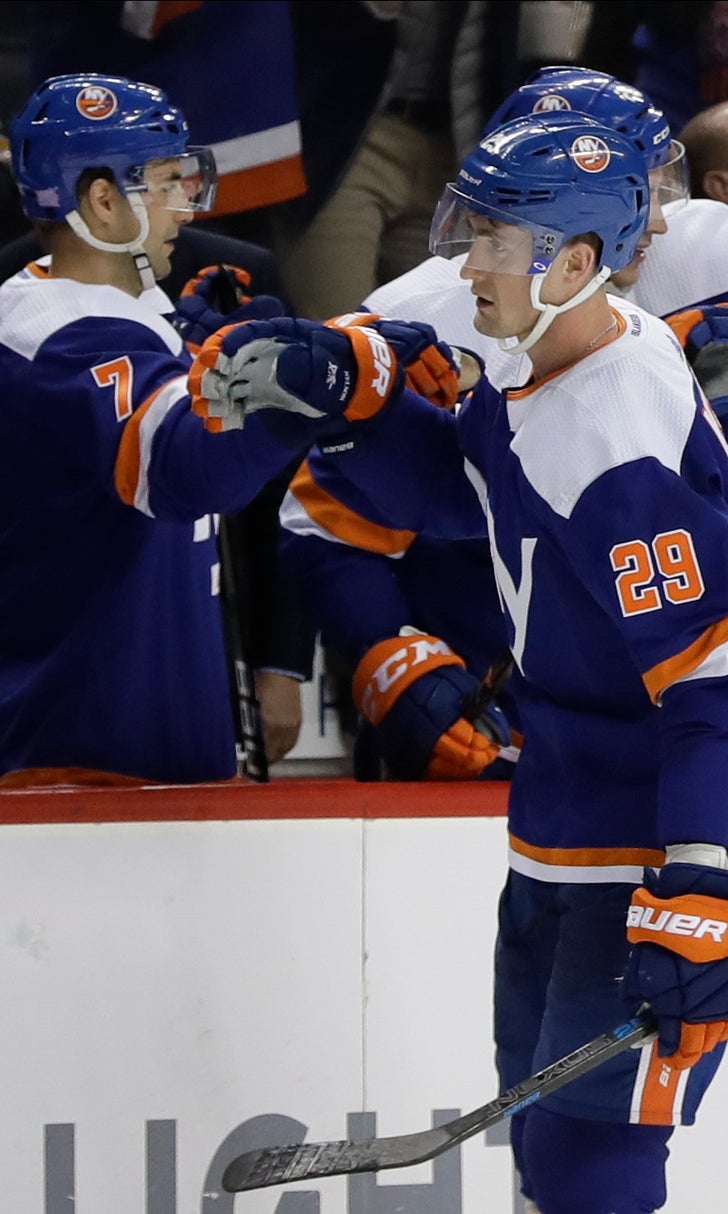 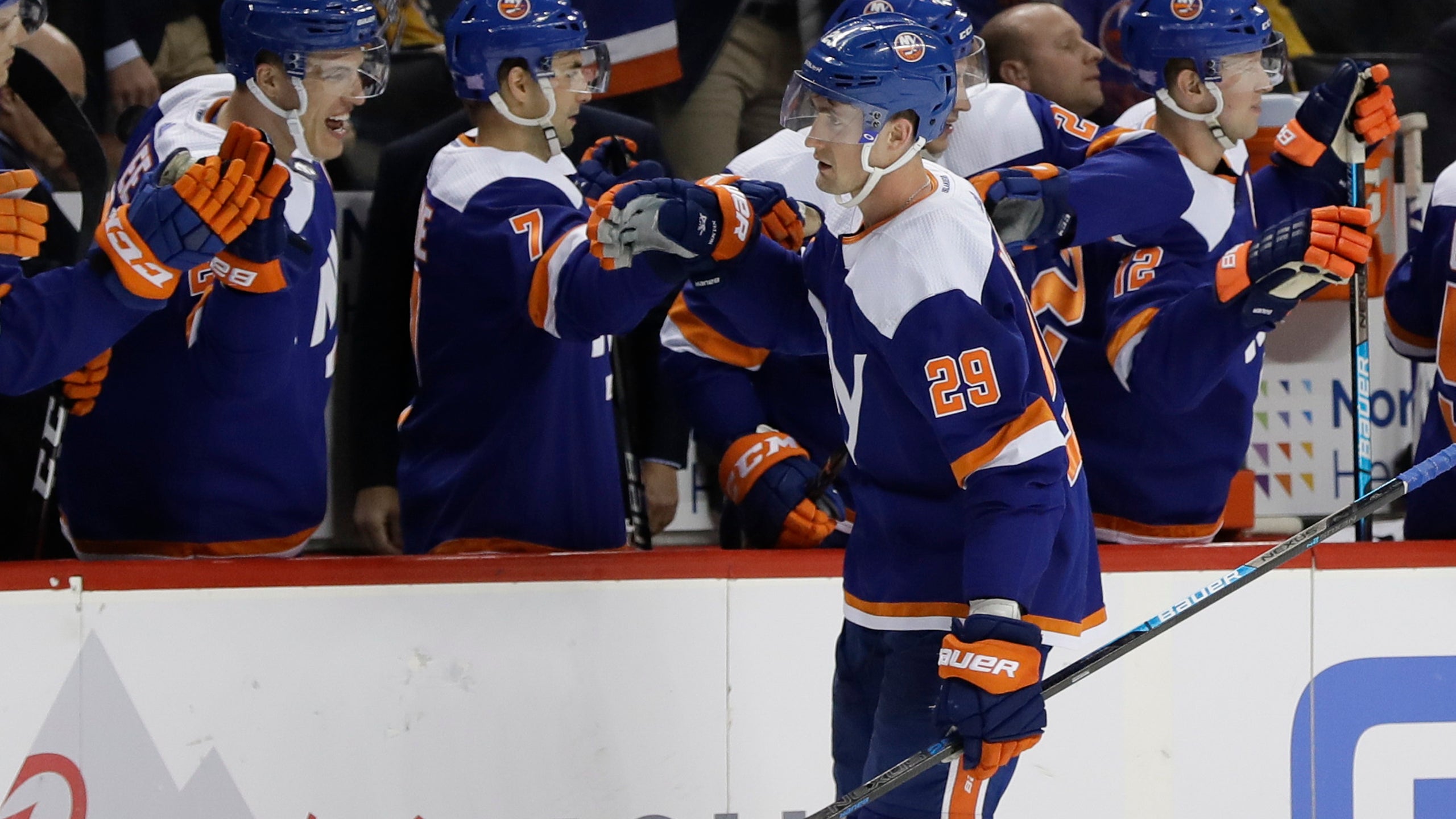 NEW YORK (AP) — Brock Nelson scored his second goal of the game 4:16 into overtime, and the New York Islanders beat the Pittsburgh Penguins 4-3 on Thursday night to extend their point streak to a franchise-record 16 games.

Nelson, who also scored the overtime winner at Pittsburgh on Tuesday night, got a pass from Mathew Barzal on the left side on a rush. He cut across the front of a goal to avoid a defender and draw goalie Matt Murray out of position, and then backhanded the puck into the right side for his eighth.

The Islanders improved to 15-0-1 during their streak while winning their fifth straight since an overtime loss to the Penguins on Nov. 7. New York had earned points in 15 straight games three times previously, the last during a 15-game win streak in the 1981-82 season.

Evgeni Malkin had a goal and an assist for the Penguins. Murray finished with 20 saves.

Auston Matthews, Tyson Barrie and Pierre Engvall scored for Toronto, and Frederik Andersen stopped 30 shots. It was Barrie’s first goal of the season, and the first one of Engvall’s career.

Keefe took over for the fired Mike Babcock on Wednesday.

SUNRISE, Fla. (AP) — Aaron Ekblad scored his second goal of the game 22 seconds into overtime, and the Panthers rallied with five straight goals.

Brett Connolly sparked the comeback with two goals in 27 seconds in the second period, and Dominic Toninato tied it with 4:23 remaining in the third. Sergei Bobrovsky made 28 saves, and Aleksander Barkov and Jonathan Huberdeau each had two assists.

Florida became the second team in NHL history to overcome a deficit of four-plus goals to win a game multiple times in a season, joining the 1983-84 Edmonton Oilers. The Panthers also pulled off the trick in a 5-4 shootout win at Boston on Nov. 12.

Ondrej Kase had a goal and an assist for the Ducks, and Rickard Rakell, Nick Ritchie and Max Jones also scored. John Gibson stopped 23 shots.

Vancouver went 5 for 6 with the man advantage. Elias Pettersson had a goal and two assists, and Tyler Graovac, J.T. Miller and Brock Boeser also scored power-play goals before Tanner Pearson made it 6-3 with a short-handed goal with 2:02 remaining.

Nashville dropped its sixth consecutive game. Ryan Johansen, Calle Jarnkrok and Matt Duchene scored for the Predators, and Pekka Rinne made 12 saves on 17 shots before he was replaced by Juuse Saros.

DALLAS (AP) — Jamie Benn scored with 4:21 left, and the rolling Stars got the win after they blew a three-goal lead.

Mattias Janmark returned from injury to score the first of three Dallas goals in the second period, all assisted by Corey Perry.

Patrik Laine got his 17th goal in 15 games against Dallas, and Luca Sbisa tied it with 4:46 left in the third.

Benn scored 25 seconds later, skating across the slot and slipping a shot into the right side of the net. Tyler Seguin added an empty-netter with 35 seconds to play.

Timo Meier scored early in the second period for San Jose, and Brayden McNabb tied it midway through the third.

Dell had perhaps his best performance of the season against a team that had given him fits in his three prior meetings. Dell came in 0-2-1 with a 4.28 goals-against average and an .868 save percentage against the Golden Knights.

LOS ANGELES (AP) — Tyler Toffoli had two goals and an assist to lead the Kings to the victory.

Jeff Carter added a goal and two assists for Los Angeles, which has won five straight at home. Anze Kopitar and Michael Amadio also scored, and Jonathan Quick made 25 saves.

Buffalo has dropped nine of 10 (1-7-2) after winning nine of its first 12 games. Rasmus Ristolainen and Brandon Montour scored for the Sabres, and Linus Ullmark had 24 saves.

Bruins star center Patrice Bergeron had an assist in his return after missing two games with a lower-body injury.

Mats Zuccarello and Jordan Greenway also scored for Minnesota. Alex Stalock made 25 saves and Ryan Suter added two assists as the Wild improved to 5-0-2 in their last seven home games.

Zach Sanford had a goal and three assists, helping the Blues improve to 9-1-2 in their last 12 games. David Perron and Vince Dunn also scored, and Robert Thomas had three assists.

David Rittich finished with 26 saves for Calgary, which has lost six in a row while being outscored 23-5.

Mikhail Sergachev scored a power-play goal in the first period, and Cedric Paquette added an empty-netter.

The Lightning played without NHL MVP Nikita Kucherov, who is day to day after suffering an upper-body injury in the second period of Tuesday’s 3-1 loss at St. Louis.

Steven Stamkos, who leads the Lightning with seven goals and 20 points, was held out of the second and third periods but was on the bench. He played 5:17 over nine shifts in the first.

Brent Seabrook and Dylan Strome scored for Chicago, and Corey Crawford made 31 stops.

Jenner beat Jimmy Howard with a sharp-angle shot 8:43 into the third, 63 seconds after Bjorkstrand’s tying power-play goal. Robinson made it 5-3 before Detroit’s Tyler Bertuzzi scored with 3:14 left.

Bertuzzi had two goals for Detroit, which has lost four straight. Filip Hronek and Luke Glendening also scored, and Howard made 32 saves.

Philadelphia’s Morgan Frost had a goal and an assist in his second NHL game. Ivan Provorov also scored, Travis Konecny had three assists and Kevin Hayes added an empty-netter with 5.7 seconds left.

Carolina had won four in a row. Lucas Wallmark tied it at 3 at 3:24 of the third period, Teuvo Teravainen had a goal and an assist 80 seconds apart in the first, and Sebastian Aho also scored.

Brian Elliott made 33 saves for Philadelphia while Petr Mrazek stopped 18 shots for Carolina.