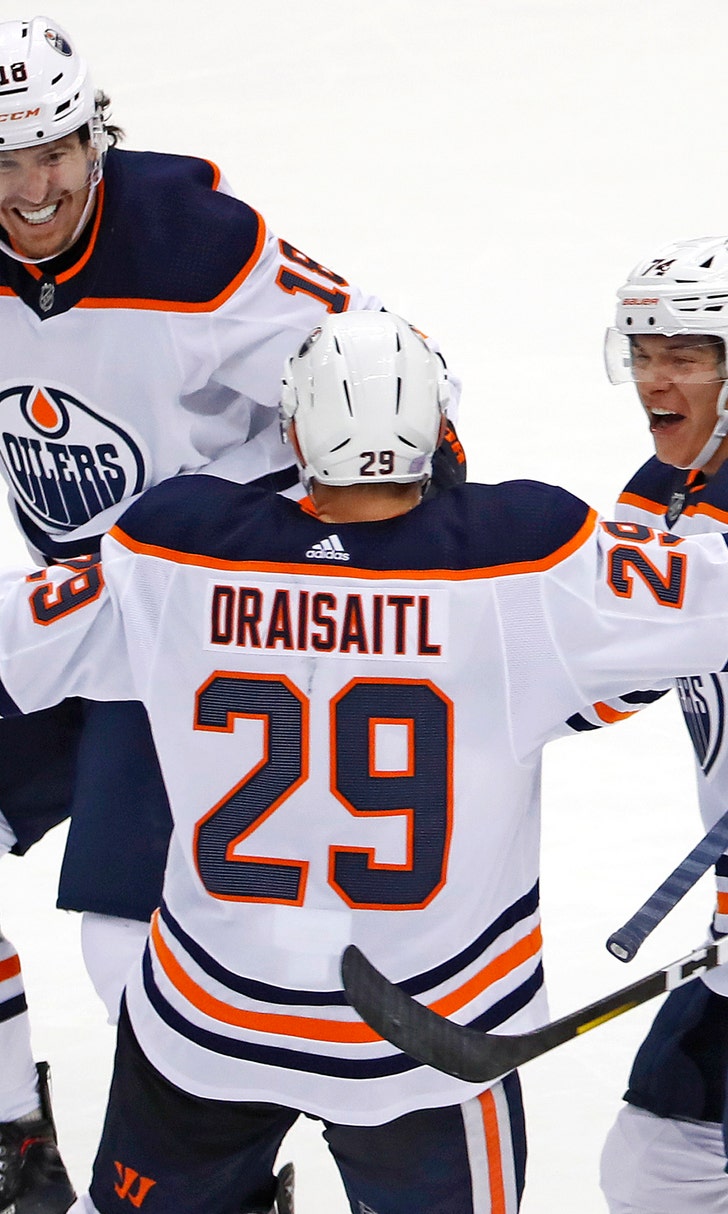 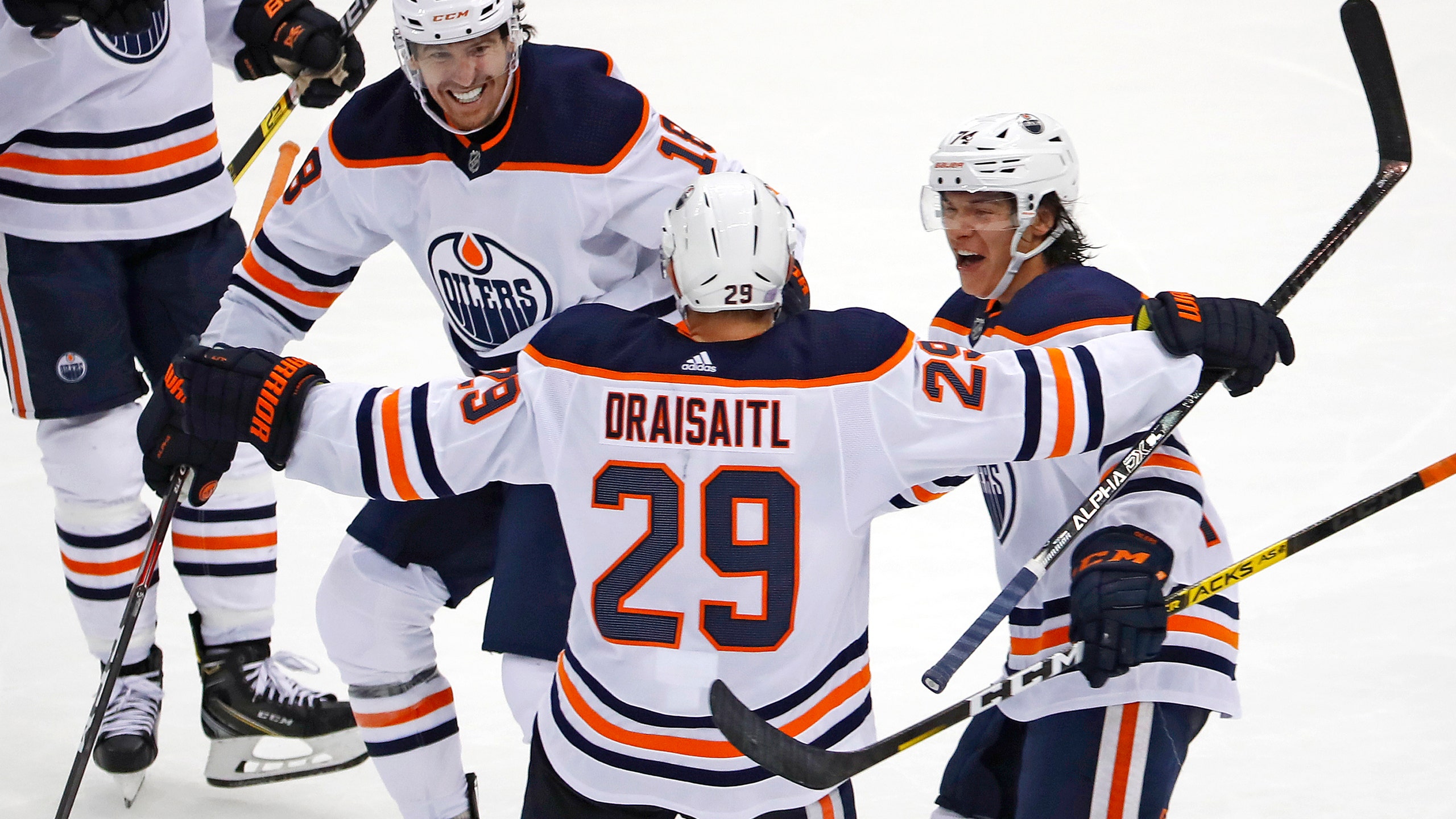 PITTSBURGH (AP) — Leon Draisaitl scored in overtime to give the Edmonton Oilers a 2-1 win over the Pittsburgh Penguins on Saturday.

Draisaitl had Alex Galchenyuk on his back when he flipped a rolling puck past Matt Murray on a breakaway 2:37 into overtime for his NHL-best 13th goal of the season. Draisaitl had 12 goals and 25 points in October and has seven goals and 10 points during a five-game point streak.

Colby Cave also scored for Edmonton, which has three wins in its last seven games after starting 7-1. Mike Smith stopped 51 shots for the Oilers.

Brian Dumoulin scored a short-handed goal for Pittsburgh, which has lost four of its last six. Murray made 27 saves.

BOSTON (AP) — David Pastrnak had a goal and two assists as Boston beat Ottawa, in a game in which the Senators' Scott Sabourin was taken to a hospital for evaluation after being taken off on a stretcher.

Sabourin was taken from the ice with his head immobilized following a collision with David Backes in which the players' helmets hit at nearly full speed early in the first period.

Patrice Bergeron, Brad Marchand, Danton Heinen and Jake DeBrusk also scored for Boston, which has lost just once in regulation this season. The Bruins have won five straight.

Tuukka Rask made 30 saves for the Bruins, including eight when Boston was short-handed for six straight minutes.

Derick Brassard scored in the first period as the Islanders continued their longest unbeaten streak in 30 years. They have won nine in a row twice before, in 1989-90 and during a franchise-record 15-game win streak during the 1981-82 season.

The Sabres lost in regulation at home for the first time this season and are on a three-game skid entering a trip to Sweden next week.

Carter Hutton stopped 20 shots to keep the Sabres in the game.

SUNRISE, Fla. (AP) — Sergei Bobrovsky earned his first shutout with Florida, and Jonathan Huberdeau had two goals and an assist as the Panthers cruised past struggling Detroit.

Bobrovsky, who signed with the Panthers as a free agent in the offseason, stopped 22 shots for his 34th career shutout.

Aleksander Barkov had a goal and an assist, and Brett Connolly also scored for the Panthers. Keith Yandle added two assists.

The Panthers have won five of seven. Jonathan Bernier made 37 saves for Detroit, which fell to 1-9-1 in its past 11 games.

Filip Chytil and Ryan Strome scored for the Rangers, who have won three of four.

Viktor Arvidsson had the lone goal for Nashville, which has lost two straight.

Chytil scored the game's first goal. He has scored in consecutive games since being recalled from Hartford of the AHL Oct. 28.

Miles Wood had a goal and an assist for New Jersey, which entered having been outscored 14-2 in three road games. Wood assisted Subban's score, and Mackenzie Blackwood made 24 saves. Nico Hischier and Jack Hughes also scored, and Damon Severson added an empty-net goal in the final minute.

Erik Haula had a goal and an assist for Carolina, which had its three-game home win streak snapped.

The Flames won their second game in two nights and dealt Columbus its fourth straight loss, and second straight at home.

Rittich stopped 43 shots for his seventh victory and second shutout.

PHILADELPHIA (AP) — Andres Johnsson scored in the 11th round of the shootout to give Toronto the win over Philadelphia.

Kasperi Kapanen, Jason Spezza and Mitchell Marner scored in regulation for Toronto, which received 37 saves from Frederik Andersen during regulation and overtime and 10 stops in the shootout session.

The shootout period saw both goaltenders shine. Andersen and Elliott allowed one goal in the first 10 rounds of the shootout. In the 11th, Andersen recorded a glove save on Provorov, while Johnsson was able to beat Elliott to the stick side for the winner.

DALLAS (AP) — Denis Gurianov scored two goals, one on a penalty shot, and Ben Bishop made 35 saves to lead Dallas past Montreal.

As Gurianov skated in on Canadiens goalie Carey Price on a breakaway, Nick Suzuki was called for slashing at 18:49 of the second period. After the stoppage, Gurianov slid the puck between Price's legs.

Gurianov also added the Stars' second power-play goal of the game, his fourth goal this season and fifth of his NHL career.

Alexander Radulov scored in the first period and Miro Heiskanen added an empty-netter for Dallas, which has won six of seven.

Montreal's loss ended a three-game winning streak. Artturi Lehkonen scored for the Canadiens with 3:42 to play, and Price stopped 36 shots.

The defending champion Blues lead the Western Conference with 21 points, despite losing star Vladimir Tarasenko to injury five games ago. Jake Allen made 20 saves in his third start of the season.

Mackenzie MacEachern and Carl Gunnarsson each scored their first goal in the first period for the Blues, who tied the game at 3 early in the third period when Sammy Blais jammed the puck past Devan Dubnyk for his fifth score in 13 games.

Dubnyk stopped 25 shots for the Wild, who went to an extra session for the first time this season and had their three-game home winning streak stopped.

GLENDALE, Ariz. (AP) — Darcy Kuemper stopped 33 shots in his first shutout of the season, Phil Kessel had a goal and an assist and Conor Garland scored his team-high seventh goal as Arizona beat Colorado.

Kuemper, who was fifth in the Vezina Trophy voting last season, weathered a short Colorado offensive burst midway through the second period for his 17th career shutout. He had a career-high five shutouts last season.

Brandon Sutter, Jake Virtanen and Adam Gaudette also scored as the Canucks won for the ninth time in 12 games.

Marc-Edouard Vlasic scored a short-handed goal for San Jose, which has lost five straight and seven of eight (1-6-1). Evander Kane scored his eighth goal for San Jose in the closing seconds.

Bo Horvat had two assists for the Canucks. He has 11 points (five goals, six assists) in his last seven games.

It was Connor's seventh career goal in seven games against Vegas.

The Jets won their second straight game on back-to-back nights, after surviving San Jose's 53 shots Friday during a 3-2 victory.

David Kampf, Dominik Kubalik and Jonathan Toews scored for the Blackhawks, who are 1-4-2 in their past seven games. Corey Crawford made 40 saves.

Los Angeles Kings
share story
those were the latest stories
Want to see more?
View All Stories
Fox Sports™ and © 2021 Fox Media LLC and Fox Sports Interactive Media, LLC. All rights reserved. Use of this website (including any and all parts and components) constitutes your acceptance of these Terms of Use and Updated Privacy Policy. Advertising Choices. Do Not Sell my Personal Info