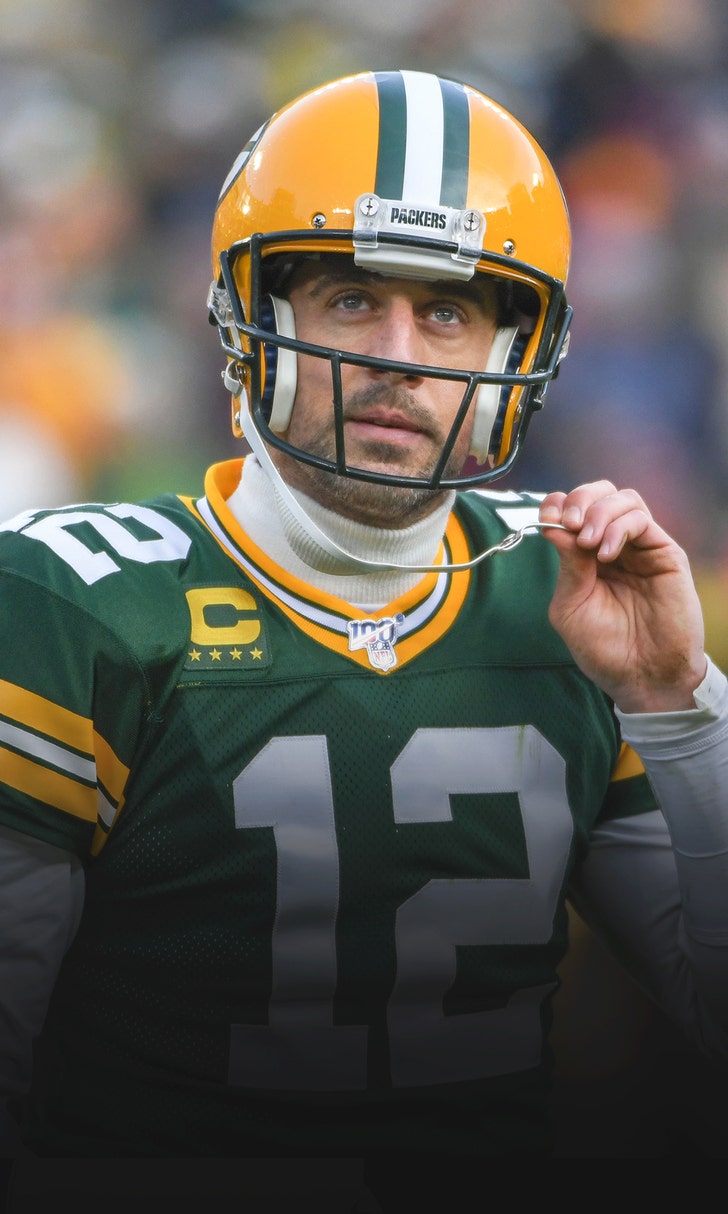 previous story
What's Next For The Fans?
next story
How We Got Here: Drew Brees
National Football League

The results are in – and Aaron Rodgers is nowhere to be found.

This week, Pro Football Focus released its list of the Top 50 players in the NFL heading into the 2020 season.

But what no one might have predicted is that Green Bay quarterback and NFL legend Aaron Rodgers would be left completely off the list, despite being PFF's top-rated quarterback from the last decade.

Did PFF get it right? How does Rodgers stack up against the other six QBs heading in 2020?

Well, first, let's analyze PFF's criteria for the list, which makes it clear that the rankings are about which NFL players will be the best in 2020, not who are the best players based on previous production:

The PFF50 is a product of evaluating every player on every play of each NFL season to produce PFF's unrivaled database of stats, grades and information. This list is not about how valuable players are, but rather about how good they are, regardless of position. A guard, cornerback, receiver or even a running back has just as good a chance to appear on this list as a quarterback does.

We started from the standpoint of a multiyear look at their grading before making adjustments based on situation, relevant injuries and new circumstances that could change a player's future outlook. Sample size was factored in as well as any suggestion of decline from players reaching the latter stages of their careers.

Regardless of the criteria, from the outside looking in, Rodgers has a strong case to be among the 50 best players in the league. In his 12 seasons as the starter for the Packers, not only is he a 2-time NFL MVP, 2-time First-Team All-Pro selection and 8-time Pro Bowler, he led the Packers to a 13-3 campaign last season and an NFC championship berth.

Individually, in 2019, Rodgers didn't have the best year by his standards, but he still passed for 4,002 yards, 26 TDs and only 4 INTs, the 9th consecutive season he's thrown less than 10 picks.

And heading into the 2020 season, ESPN's Max Kellerman expects Rodgers to lead the Packers to a second consecutive NFC North title.

"The thing about Aaron Rodgers is every single preseason, his team is among the preseason favorites to win a Super Bowl ... but every year there is some turnover – are the main pieces on offense still there? Yes. Is their quarterback, who is one of the best to ever do it, could you anticipate he could have a better season than he did last year? Yes. Hard for me to imagine them winning fewer than double digits."

There are a few significant areas in-need of improvement for Rodgers and the Packers this season, including the efficiency of the passing game, according to PFF.

According to Pro Football Focus, Rodgers used play-action on 26.1 percent of his attempts in 2019, up from 20.3 percent the 2018 season. However, the Packers lacked the production and incredible efficiency that play-action passes created for most of the NFL’s top offenses ... Rodgers threw only three touchdown passes off of play-action, tied for the 27th most in the NFL. Other quarterbacks that threw three play-action touchdown passes in 2019: Mitchell Trubisky, rookies Drew Lock and Dwayne Haskins, and stop-gap veterans Eli Manning, Case Keenum and Matt Moore.

What also can't be ignored is that Rodgers will turn 37 during the 2020 season, and four of the six quarterbacks on the top 50 list are younger than Rodgers, including the Texans' Deshaun Watson, who came in at No. 43

Watson's 2019 season was his best yet. He led the Texans to a 10–6 record and their second straight AFC South title.

PFF's Steve Palazzolo broke down why Watson made the cut and Rodgers was left off the list.

"I think both quarterbacks are just going in the opposite directions. Deshaun Watson, we've seen the third best grade of any quarterback in their division in their first three years since he started back in 2006 ... so we're banking on this year, he starts taking that next step. Whereas with Rodgers, the Packers offense has just gotten less and less efficient every year. Still has the special throws – he's just not as good on a throw for throw basis."

Up next? The legendary Tom Brady, who after 20 seasons and 6 Super Bowl titles with New England, is now a member of the Tampa Bay Buccaneers.

But, on the bright side, he's headed to a new team – one with a lot of weapons, including 1,000-yard receivers Chris Godwin and Mike Evans.

With Jameis Winston at the helm in 2019, Tampa Bay was the No. 1 passing and receiving offense in the NFL, and Bucs LB Shaq Barrett, believes Brady will only make the offense stronger.

"[Signing Tom Brady] instantly made us a Super Bowl contender, a playoff contender – and that's exactly where we need to be right now. We feel like we had almost everything. We added a few key pieces, and now we have everything we need to make a good run."

In 2019, the Saints went 13-3 in the regular season, marking the first time in franchise history the Saints posted back-to-back seasons with 12 or more wins. Brees was aided by wide receiver Michael Thomas, who broke the record for most receptions in a single season.

At No. 8 on the list is Baltimore Ravens quarterback Lamar Jackson, the reigning NFL MVP.

Baltimore finished the season 14-2 led by Jackson, who passed for 3,127 yards and 36 TDs, and rushed for 1,207 yards and 7 TDs. In the process, he broke Michael Vick’s record for rushing yards by a quarterback in a single season.

Jackson became only the second player to win the NFL MVP award unanimously (Tom Brady), and at age 23, he became the second-youngest player to ever win the award.

Just ahead of Jackson in the 7th spot is Seattle Seahawks quarterback Russell Wilson.

Wilson is a 7-time Pro Bowler and holds the record for most wins by an NFL quarterback through their first seven seasons (75) and is one of two quarterbacks in NFL history with a career passer rating over 100 (101.2) – the other is Aaron Rodgers (102.4).

With Wilson under center, the Seahawks have never had a losing season, and in seven of his eight seasons as starter, Seattle has won at least 10 games, making it to the playoffs seven times.

PFF analyst Sam Monson even picked him as the 2019 regular season MVP over Jackson.

This season, the data points to the fact that no player added greater value to their team than Russell Wilson did for the Seattle Seahawks ... While Jackson had an entire offense built around his strengths and had a coaching staff that embraced analytics to extend drives and steal fine winning margins, Wilson was dealing with a situation that consistently put him behind the 8-ball, then asked him to dig the team out of a hole. The fact that he was able to do just that as consistently as he did only stands testament to his MVP-caliber season.

The final quarterback on the list is Kansas City's Patrick Mahomes, who holds the No. 2 spot.

Mahomes was named Super Bowl MVP last season after he led the Chiefs to their first Super Bowl victory in 50 years. And this was coming off of a 2018 campaign in which he passed for 5,097 yards and 50 TDs, winning the NFL MVP award in his first full season as a starter.

NFL analyst Peter Schrager believes Mahomes is the closest thing the league has to NBA Hall of Famer and legend Michael Jordan, drawing five comparisons between the two.

For Rodgers, the competition is stiff at the top of the quarterback hierarchy, but considering he is only one of two quarterbacks mentioned here that played in one of the NFL's conference championship games last year, he still has some juice left in the tank.

Cowboys Drop The Ball Against Cardinals
A nightmare season for Dallas continued on Monday Night Football, as Arizona capitalized on multiple miscues for the win.
11 hours ago

Chiefs Get Back On Track
Kansas City ran wild over the Bills on Monday night, as an unexpected facet of the offense led to a decisive victory.
14 hours ago

The GOATS, the bad and the Jets
Charlotte Wilder recaps a wild NFL Sunday, including a battle of QB legends, a bevy of QB struggles and one hapless, winless team.
18 hours ago

Coach 'Em Up
The Titans, Bucs and Steelers are showing just how valuable elite coaching is to NFL success, Geoff Schwartz explains.
19 hours ago

Steeling the Spotlight
Pittsburgh is not-so-quietly making its case as the best team in the AFC, and so far, its defense has been the catalyst.
20 hours ago
those were the latest stories
Want to see more?
View All Stories
Fox Sports™ and © 2020 Fox Media LLC and Fox Sports Interactive Media, LLC. All rights reserved. Use of this website (including any and all parts and components) constitutes your acceptance of these Terms of Use and Updated Privacy Policy. Advertising Choices. Do Not Sell my Personal Info