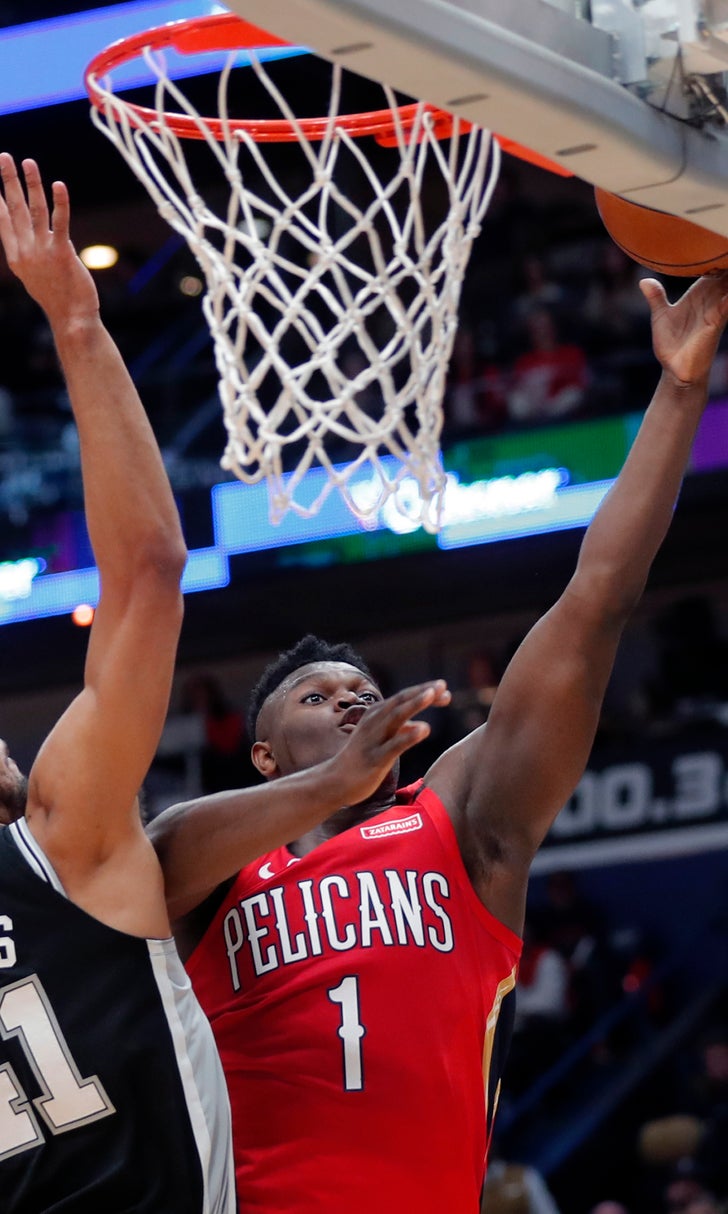 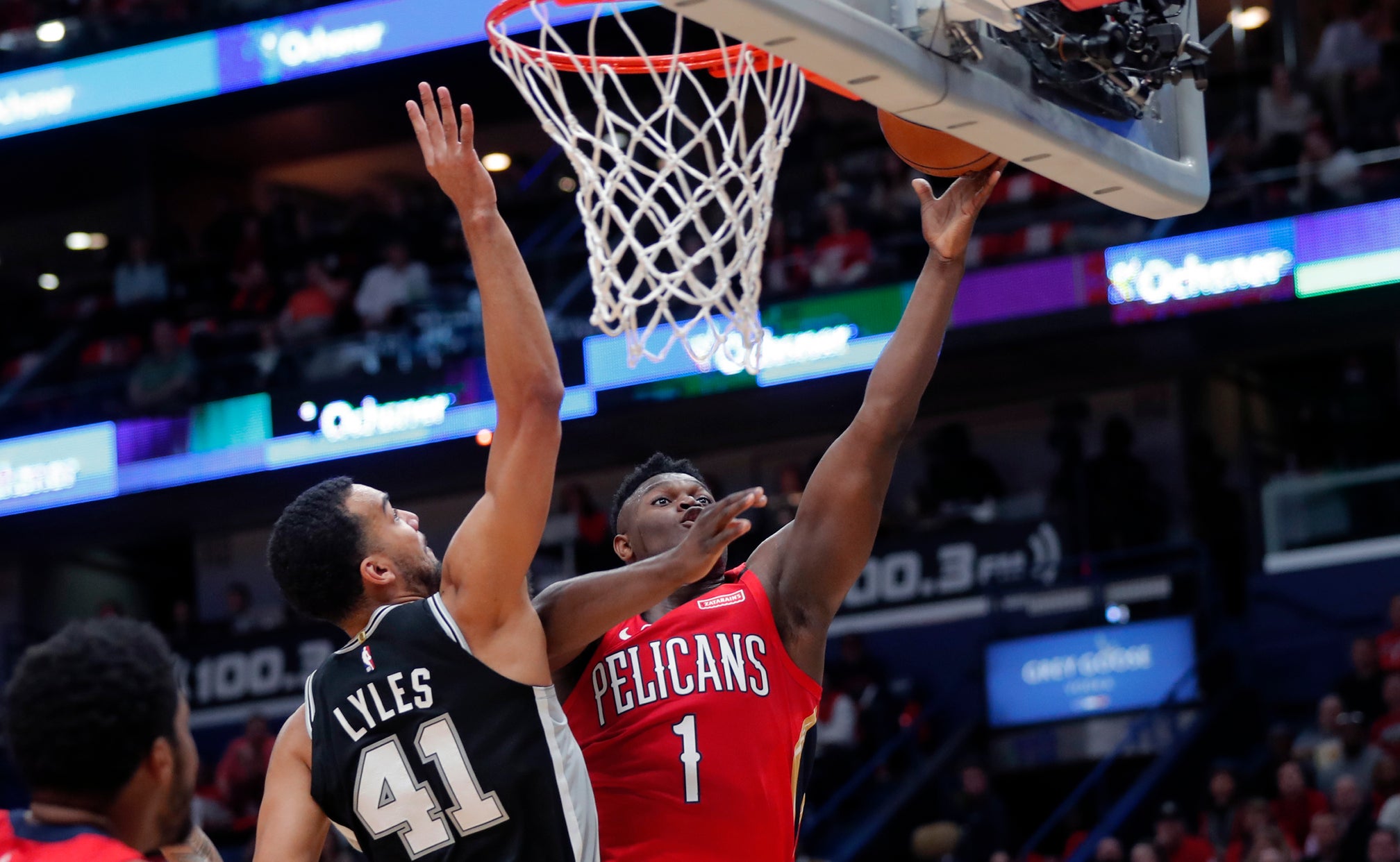 Williamson's 22 in debut not enough for Pelicans vs. Spurs

Then the NBA's No. 1 overall draft pick went to the bench — as mandated by medical staff — and watched the game slip away from the Pelicans while unheeded chants of, “We want Zion!” echoed around the Smoothie King Center.

Williamson capped his long-awaited NBA debut by scoring 17 of his 22 points in the fourth quarter and stirring the crowd into a frenzy — but the savvy and composed San Antonio Spurs weathered the surge for a 121-117 victory Wednesday night.

The celebrated rookie out of Duke, whose maiden regular season appearance was delayed three months by arthroscopic surgery on his right knee, said watching the final five minutes from the bench out of caution was “very hard.”

“I'm 19, honestly. In that moment, I'm not thinking about longevity,” Williamson continued. “I'm thinking about winning that game, so it was very tough.”

“The crowd got into it. We didn’t let it rattle us,” DeRozan said, adding that Williamson “went on a hell of a run.”

With Spurs coach Gregg Popovich sending double-teams at Williamson, the rookie struggled to find his shot during the first three quarters. When the fourth quarter began, he had just five points, four rebounds, an assist and four turnovers in a little less than 12 minutes.

But when the 6-foot-6, 285-pound Williamson found himself open for a straight-on 3 with about nine minutes to go, he let it fly and it went down, infusing the stadium with energy. He followed that up with a torrid three-minute stretch in which he laid in an alley-oop lob, put back a missed shot with a reverse layup and hit three more 3s.

Williamson wasn't known for shooting 3s when he starred at Duke. He was so often able to dominate inside. But Williamson noted that his long rehabilitation probably helped him refine his outside shot.

“When you're not able to move around and do athletic movements for a while, the only thing you can do is just shoot spot-up jumpers, I guess that was the result of that.”

His teammates loved it.

“The first one, I was like, ‘All right. Cool,” guard Jrue Holiday said. “Then the second three I was like, 'All right, boy, you’ve been practicing.' And the third one, and from that point on, the energy was crazy."

Williamson came into the game knowing his playing time would be limited — even though he started. He had played a total of 18:18 when he was subbed out for good with the Pelicans — who trailed by 12 to start the final period — down 109-108.

Soon after, DeRozan began San Antonio's decisive surge with a finger roll and pull-up jumper. Aldridge followed with a tip-in and jumper shortly after.

New Orleans got as close as 119-117 on Josh Hart's 3, but Aldridge responded with two free throws and the Spurs did not give up another basket.

“I was really proud of our guys,” Popovich said. “We took a huge blow. We stayed the course and just played.”

Brandon Ingram scored 22 for New Orleans but missed 16 of 22 shots, while Lonzo Ball had 14 points and 12 assists.

Williamson entered the Smoothie King Center wearing a black suit with a blue design and blue basketball sneakers. Written in pink on the black T-shirt he wore under his sport coat was the expression, “Let's Dance,” which was his message to New Orleans the night the Pelicans drafted him.

He certainly found his rhythm in the fourth quarter of his first game, raising hopes for what lies ahead in New Orleans' remaining 37 games.

“It was everything I dreamed of, except for the losing part,” Williamson said. “Just the energy the crowd brought, the energy the city brought, it was electric and I'm just grateful that they did that. So it was a dream come true to finally get out there, but at the end of the day I did want to win, so we've got to look to the next game.”

Spurs: Dejounte Murray scored 13 and Derrick White 12. ... DeRozan has scored at least 20 points in 15 of 16 games. ... Rudy Gay returned after being sidelined three games by an illness. He had two rebounds in nine minutes off the bench.

Popovich sounded genuinely enthused to be in the building for Williamson's first game.

“You just feel like you’re seeing a new generation come in and you get to see it. You get to be right in the middle of it," Popovich said before tip-off.

The 24th-year Spurs head coach, who has won five championships, began to reminisce about his first NBA job as a San Antonio assistant under Larry Brown in the 1988-89 season, which was the heart of the Michael Jordan era.

“I can remember my first days as an assistant for Larry and being mesmerized sitting on the bench watching Michael go up and down the court. I don’t even know if I knew what was going on in the game. I just couldn’t take my eyes off of him,” Popovich said. “So, I think about that and now we’ve got this generation coming in and it’s been a lot of fun to see.”

Pelicans: Host Denver on Friday night in the second of three home games in five nights.