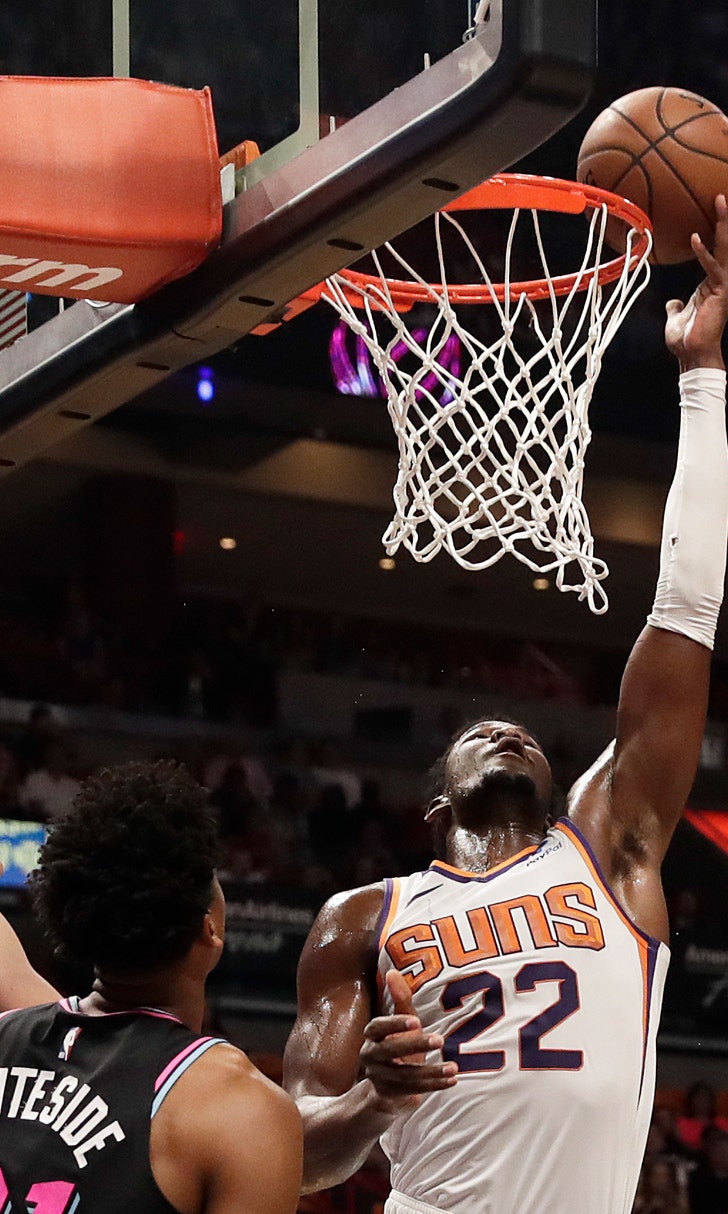 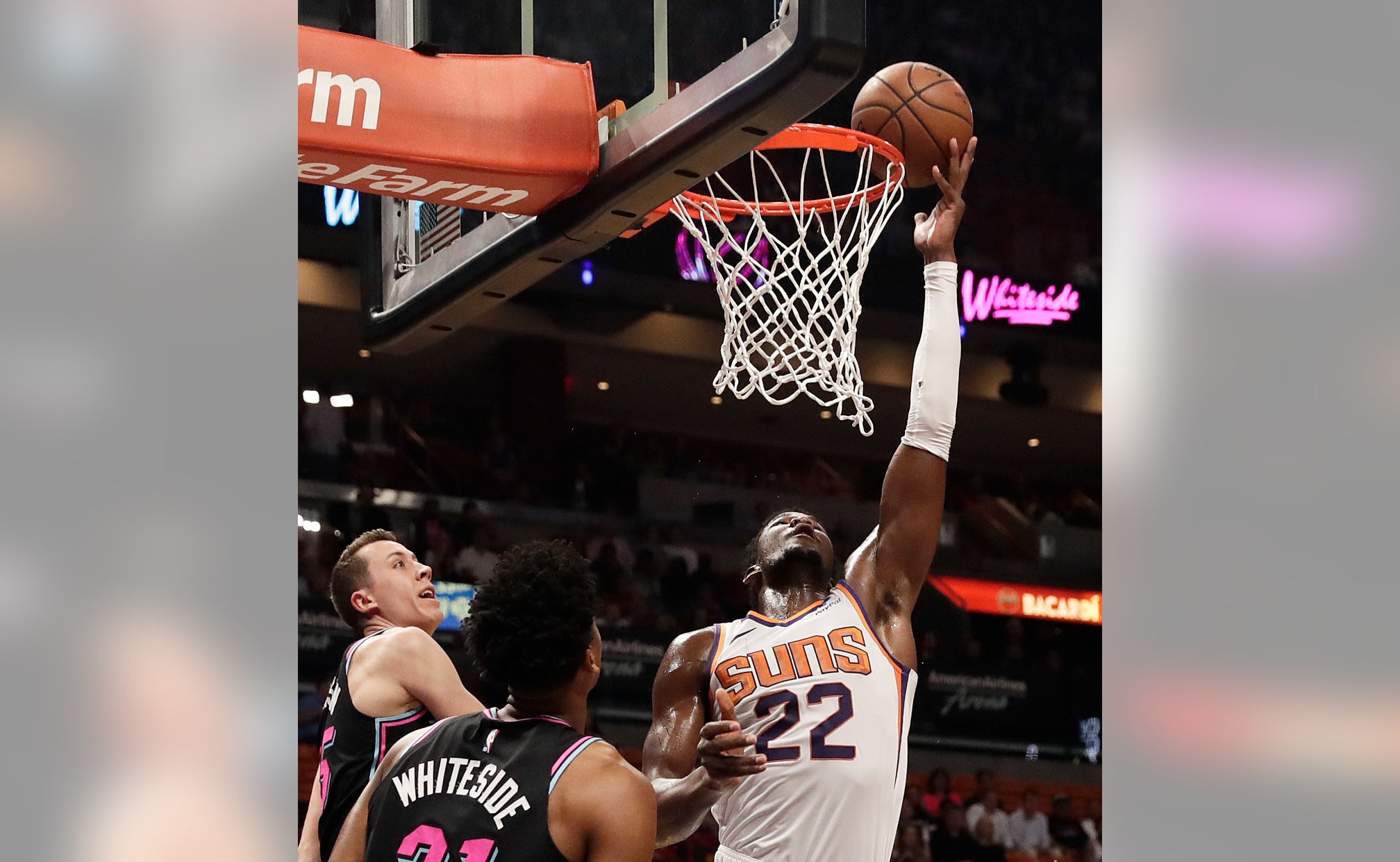 Harden returned after missing Saturday's win over Golden State with a neck injury. His run of games with 30 or more points was the second-longest in NBA history behind a 65-game streak by Wilt Chamberlain.

Harden, who said he was still bothered by the neck problem Monday morning, missed all 10 3-pointers he attempted. He got to 28 points with 23.3 seconds left and had the ball on Houston's last possession but did not attempt a shot from half court with the game in hand.

Harden last came up short of 30 points in a Dec. 11 win over Portland, when he had 29. During the streak, he scored 50 or more points four times, including a career-high 61 in a win at the Knicks on Jan. 23.

Former Heat guard Tyler Johnson scored 18 points for Phoenix. Jamal Crawford and Kelly Oubre Jr. each had 16 and were huge down the stretch for Phoenix, which scored 40 points in the fourth quarter. Deandre Ayton and Troy Daniels each had 14, and Josh Jackson scored 11 for the Suns.

Hassan Whiteside scored 29 points and Kelly Olynyk added 28 for the Heat, who have dropped six straight at home for the second time this season.

The Warriors took a 1½-game lead over the Denver Nuggets in the race for the best record in the Western Conference. Golden State dropped its previous game, a home loss against Houston on Saturday night.

Kevin Durant had 20 points and seven rebounds for the Warriors, who have not lost back-to-back games since Dec. 27. It was an off night for Stephen Curry in his return to his hometown, finishing with 16 points on 4-of-14 shooting from 3-point range.

Cody Zeller made 13 of 14 shots from the field and finished with a career-high 28 points to lead the Hornets.

A night after their defense was absent in a loss to the Knicks, the Spurs couldn't get their offense going. San Antonio was held to its lowest point total of the season, and the NBA's leading 3-point shooting team at 40 percent was a season-worst 16.7 percent behind the arc.

That sent the Spurs to a third straight loss.

Joe Harris and Caris LeVert each added 15 points for the Nets, who made 19 3-pointers.

LaMarcus Aldridge had 26 points and 10 rebounds, and DeMar DeRozan added 23 points for the Spurs.

DETROIT (AP) — Andre Drummond had 26 points and 16 rebounds, Blake Griffin had a triple-double and resurgent Detroit won for the seventh time in eight games.

Griffin had 20 points, 10 rebounds and 10 assists for Detroit, which is battling for a playoff spot in the Eastern Conference.

Indiana lost for only the second time in 10 games.

The Blazers needed a 14-0 run late in the fourth quarter to put the game away.

Cleveland cut the lead to 88-84 going into the fourth and was behind 105-102 with 4:42 left, but Portland's backcourt duo of McCollum and Damian Lillard took over from there.

Damian Lillard scored eight of his 21 points in the final period for Portland.

Cedi Osman scored 27 points for the Cavaliers, who were attempting to win three straight for the first time this season. Kevin Love, playing his fifth game since returning from foot surgery, had 18 points and 12 rebounds in 28 minutes.

The Bucks overcame a sluggish start to pick up their 17th win in 19 games.

The Bucks picked up their eighth straight road win — their best streak since a nine-game run during the 1981-82 season.

Lauri Markkanen and Robin Lopez each scored 26 for Chicago, which saw its three-game win streak halted.

LeBron James had 24 points, 12 rebounds and 11 assists but made only 8 of 23 shots. Brandon Ingram led the Lakers with 32 points, and Kyle Kuzma finished with 22 as Los Angeles lost its fourth of five.

Joakim Noah had 14 points and 12 rebounds, while Avery Bradley scored 15 points for Memphis, which ended a four-game skid.

MINNEAPOLIS (AP) — Karl-Anthony Towns had 34 points and 21 rebounds in his return from the concussion protocol, helping Minnesota hold off Sacramento.

Derrick Rose added 20 points and Tyus Jones pitched in 16 points, eight assists and three steals for the Timberwolves, who split the previous two games without Towns, while he recovered following a highway crash last week involving the car he was riding in . The accident ended Towns' streak of 302 consecutive starts to begin his NBA career.

Rookie Marvin Bagley III had 25 points and 11 rebounds and De'Aaron Fox scored 23 points for the Kings (31-29), who like the Timberwolves (29-31) are just below the cut for the Western Conference playoffs with the Los Angeles Lakers between them.

Sixers 7-foot-3 reserve Boban Marjanovic had 12 points, 10 rebound and two blocks in less than 22 minutes to help fill the void in the middle created by the absence of 7-foot All-Star Joel Embiid, who has missed all three of Philadelphia's games since the All-Star break.

Marjanovic needed assistance getting off the court and was taken to the locker room after getting tangled up with a pair of Pelicans players in the paint with just more than a minute left.

Anthony Davis scored 18 points in 21 minutes, but was taken out of the game for good with 5:11 left in the third quarter. Jrue Holiday had 22 points and Julius Randle added 19 points and 14 rebounds for the Pelicans, who trailed by as many as 17 points before their comeback bid fell just short.

Harrell had eight dunks, rattling the rim with one- and two-handed jams, including five in the first half.

Rookie Luka Doncic returned after missing two games with a sore right ankle to post his fourth triple-double for the Mavericks, who lost their fifth in a row. He had 28 points, 10 rebounds and 10 assists.

Danilo Gallinari added 20 points for the Clippers. Williams had 10 assists.