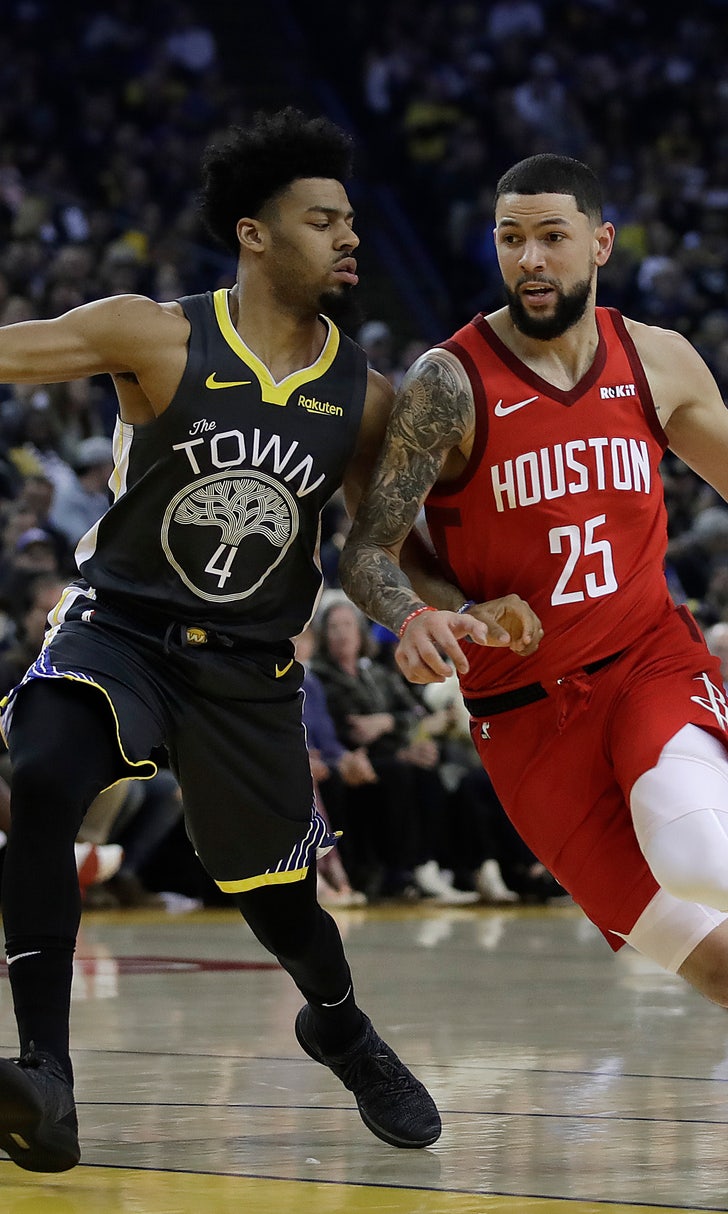 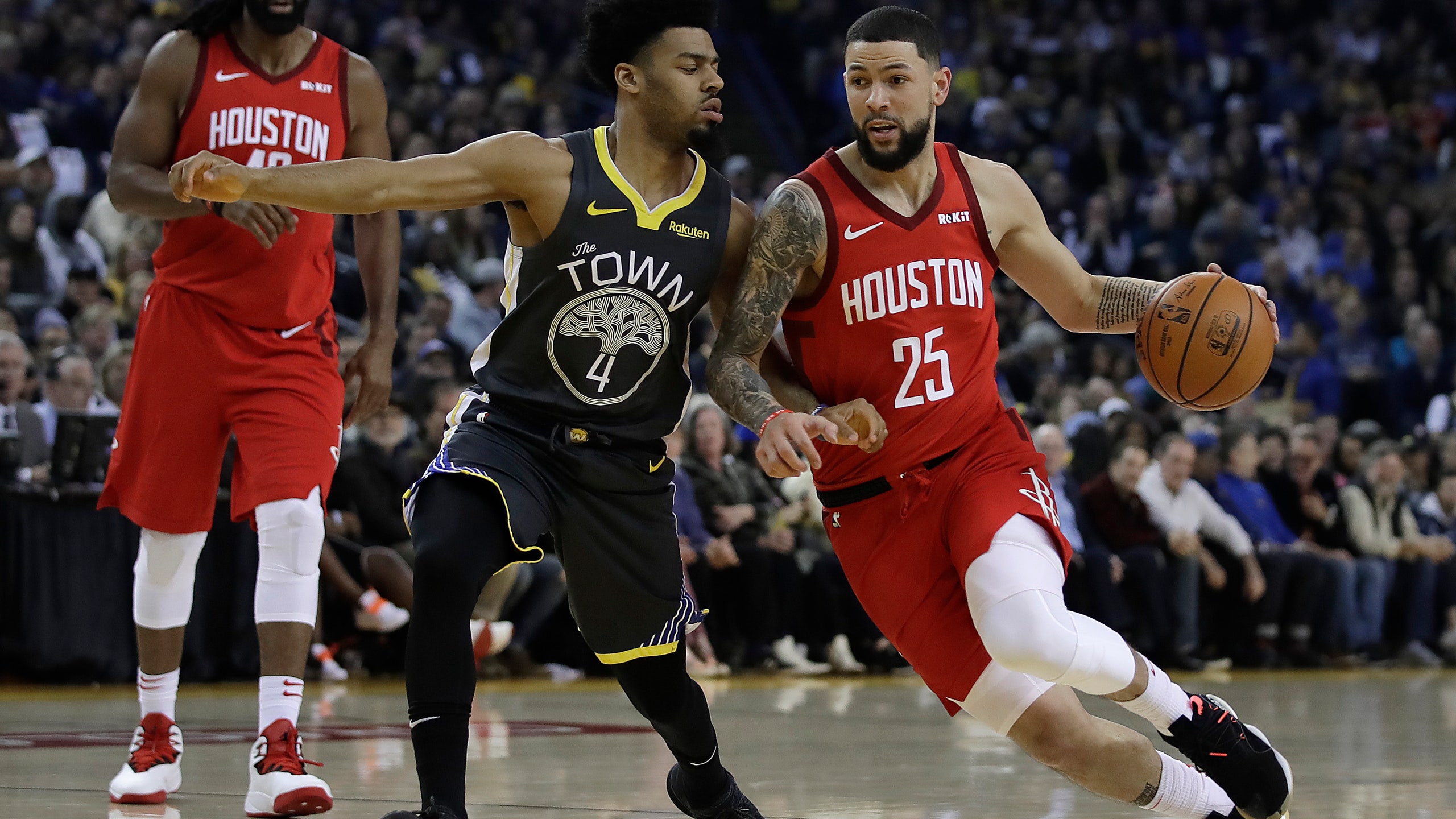 Stephen Curry's 3 with 1:57 to play pulled the Warriors to 114-108 then his two free throws at 1:26 made it a four-point game before Houston came through at the line.

Kevin Durant scored 29 points and Curry added 25 with five 3s, nine rebounds and seven assists as the Warriors had their five-game home winning streak snapped in a matchup of West powers who met in the 2018 Western Conference finals won in seven games by Golden State.

Early in the fourth, Golden State's Draymond Green exited the game with a sprained left ankle after grabbing at his foot in clear pain from stepping on teammate DeMarcus Cousins' foot.

Former Laker Julius Randle had 24 points for the Pelicans, who looked in sync and motivated as they slowed LeBron James and the Lakers' push to qualify for the playoffs.

James had 27 points and 12 assists, and Brandon Ingram scored 29 points for Los Angeles.

The Sixers struggled in their second game without All-Star center Joel Embiid, who is expected to miss at least a week with a sore left knee. Ben Simmons had 29 points and 10 assists and Tobias Harris scored 20.

Without Embiid, the Sixers couldn't keep up in a matchup between the fourth-place teams in each conference. The Blazers (36-23) have won three in a row, including a 22-point victory over Golden State before the All-Star break. Philadelphia (38-22) is 4-4 this month.

Hield, who played college ball at the nearby University of Oklahoma, shot 12 for 22 from the field. De'Aaron Fox and Marvin Bagley each added 19 points for the Kings.

Paul George, who hit the game-winner the night before in a 148-147 double-overtime win over Utah, missed a 3-pointer at the buzzer against the Kings that could have forced overtime. He shot just 4 for 19 for the night.

CHICAGO (AP) — Zach LaVine scored a career-high 42 points, Lauri Markkanen finished with a personal-best 35 points and 15 rebounds, and Chicago got some payback for the most lopsided loss in franchise history.

LaVine surpassed his previous high of 41 points at New York on Nov. 5.

Markkanen, whose high coming in was 33 against the Knicks last season, became the fourth Chicago player in 10 years to score 20 or more in eight straight games. And the Bulls returned the favor for a 133-77 beating at the United Center in December that was also the biggest romp in the Celtics' storied history.

Kyrie Irving led Boston with 37 points and 10 assists. Al Horford scored 19, but the Celtics lost for the fourth time in six games.

CHARLOTTE, N.C. (AP) — D'Angelo Russell tied a career high with 40 points and made some huge shots down the stretch, and Brooklyn picked up an important win over Charlotte.

The victory kept the Nets alone in sixth place in the Eastern Conference and gives them 2-1 edge in the series entering Friday night's game at Brooklyn.

The game ended with fans booing the officials off the court after a no-call when Kemba Walker attempted a 3-pointer from the right wing at the buzzer. Caris LeVert had him well defended and was credited with a blocked shot, but Hornets players threw their arms up in the air and the crowd erupted in loud chorus of boos believing there had been a foul.

Walker finished with 32 points, including 28 in the second half.

MILWAUKEE (AP) — Khris Middleton scored 28 points, Giannis Antetokounmpo had 27 points and 10 rebounds, and NBA-leading Milwaukee pulled away for a victory over short-handed Minnesota.

Derrick Rose had 23 points for the Timberwolves, who played without Karl-Anthony Towns for the second consecutive game.

MIAMI (AP) — Ish Smith scored 22 points off the bench, Langston Galloway added 15 points in the first five minutes of the fourth quarter and Detroit moved into seventh place in the Eastern Conference by downing Miami.

Blake Griffin had 20 points while Galloway and Luke Kennard each scored 17 for the Pistons (28-30), who are 1 1/2 games behind Brooklyn for the No. 6 spot. Reggie Jackson added 13 points and Andre Drummond had 12 points and 14 rebounds for Detroit, which started the fourth quarter on a 25-8 run to turn a fairly close game into a rout.

Domantas Sabonis added 13 points and 12 rebounds, while Darren Collison scored 11 of his 15 points in the fourth quarter to help the Pacers overcome 23 turnovers and sweep a second straight back-to-back set. Indiana has won eight of nine.

Bradley Beal scored 35 points for the Wizards, a night after posting a season-high 46 at Charlotte.

Jae Crowder chipped in 22 points off the bench and Joe Ingles added 18 for the Jazz. Rudy Gobert added 15 points and 11 rebounds.

Tim Hardaway Jr. scored 21 points for the Mavericks, who were without rookie Luka Doncic for a second straight game because of a sore right ankle. Trey Burke added 20 points off the bench in Dallas' fourth straight loss.

Love, playing in back-to-back games for the first time since returning from foot surgery, had 10 points in the fourth quarter. He was 9 of 15 from the field overall, hit six 3s and made all eight of his free throw attempts.

The five-time All-Star had 12 rebounds in 26 minutes — his most since returning from the injury — but was on the bench for the final 5:23 because he's still on a minutes restriction.

John Collins finished with 19 points and 14 rebounds for Atlanta, which snapped a two-game skid to avoid a home loss against the NBA's worst team. Just two weeks ago at State Farm Arena, the Hawks allowed the New York Knicks, last in the Eastern Conference, to snap an 18-game slide.