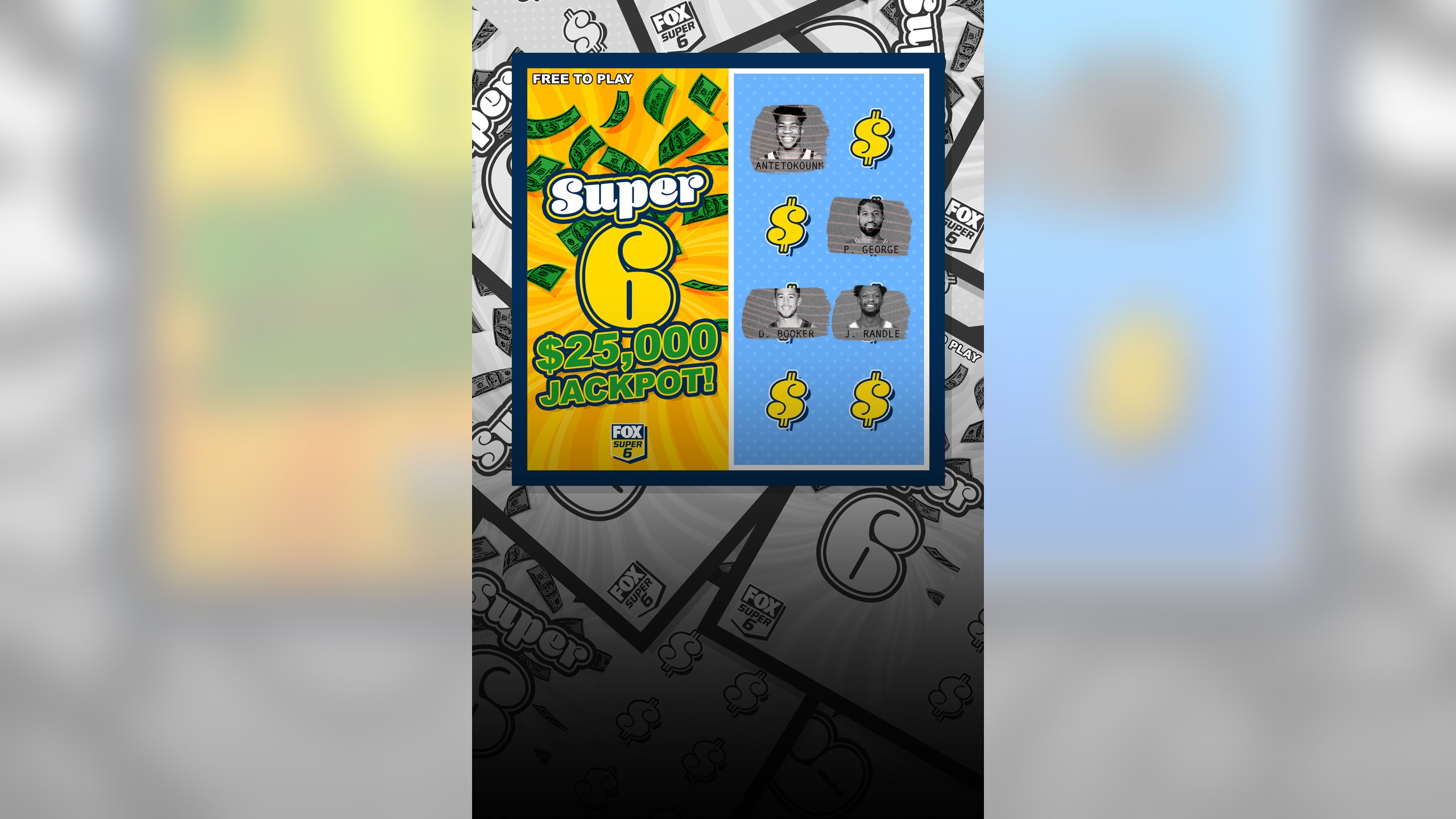 The West might have the best in the Lakers, but a number of teams in the NBA’s Eastern Conference are starting to line themselves as contenders to head to the Finals in July.

The 76ers currently stand atop the heap, thanks to Joel Embiid, and teams such as the Bucks with Giannis Antetokounmpo, the Nets with the James Harden/Kevin Durant/Kyrie Irving trio and the Celtics are certainly in the conversation.

Any night in the NBA right now is setting the groundwork for the playoffs. And Wednesday night’s slate could win you money with FOX Bet’s Super 6 contest.

Just download the Super 6 app on your mobile device and pick the winners with the correct margin of victory, and you could win the grand prize.

Here are the games for Wednesday night’s FOX Super 6 NBA contest (games subject to change due to COVID-19 protocol).

The 76ers recorded a riveting 119-110 win Sunday at Indiana without Embiid, who had back soreness as a result of a hard fall in last week’s win over the Lakers. The 76ers have gotten huge points from Tobias Harris, who scored 27 in Sunday’s win. Charlotte has won three in a row, including Monday's overtime victory at Miami, and Gordon Hayward is averaging 23.0 points per game.

On paper, these are two of the preseason contenders in the East, but both have been maddeningly inconsistent. Antetokounmpo is averaging 27.3 points a night but shooting an awful 59.3% from the foul line. Malcolm Brogdon can be counted on for 22.9 points and seven assists every night from the point guard spot for Indiana.

Two of the best young players will square off in Atlanta as Luka Doncic and the Mavs come into town to face Trae Young and the Hawks. Dallas has been struggling defensively, however, allowing 110 or more points in seven straight games before Monday’s contest against the Suns, in which they allowed 109. Young is averaging 26.9 points and nine assists for the Hawks.

The main contenders to take LeBron’s throne in the West come to James’ hometown on their final night of a six-game road trip, less than 24 hours after a clash of titans with the Nets. Kawhi Leonard & Co. have battled through some issues with COVID protocols, but the Clippers have kept right on rolling to stay atop the West. Cleveland, meanwhile, has taken on a new form of resilience, thanks in large part to Collin Sexton’s increased offensive attack.

The two teams meet in the second game of a Chi-town back-to-back following the first game Monday at the United Center. Both squads have improved, but they are doing it in different ways. The Knicks entered Monday second in the league in points allowed (104.2 per game), but they have struggled to generate a lot of offense and are worst in the league in scoring (102.2). Meanwhile, the Bulls are the opposite: fourth-worst in defensive yield (117.6) and fifth in points (115.4).

The Suns wrap up a three-game road trip with the first of two trips to New Orleans in three weeks – the other will be mid-February. Devin Booker was listed as questionable because of a hamstring injury before Monday’s game, but he played 31 minutes and finished with 24 points. Still, his status might be something to keep an eye on in this one. Meanwhile, Zion Williamson is averaging 23.5 points per game for the Pelicans in his sophomore season.

Coach Kyle For The Raptors?
When the Raptors announced the bulk of their coaching staff had been sidelined, fans called for Kyle Lowry to take the reins. Why not?
14 hours ago

Working their Wizardry
The Wizards have hit their stride in the East. Could they be on their way to a stunning playoff appearance?
22 hours ago

Time for a new logo?
Kyrie Irving believes that the NBA logo should be changed to an image of Kobe Bryant. Is there merit to that argument?
1 day ago
those were the latest stories
Want to see more?
View All Stories
Fox Sports™ and © 2021 Fox Media LLC and Fox Sports Interactive Media, LLC. All rights reserved. Use of this website (including any and all parts and components) constitutes your acceptance of these Terms of Use and Updated Privacy Policy. Advertising Choices. Do Not Sell my Personal Info