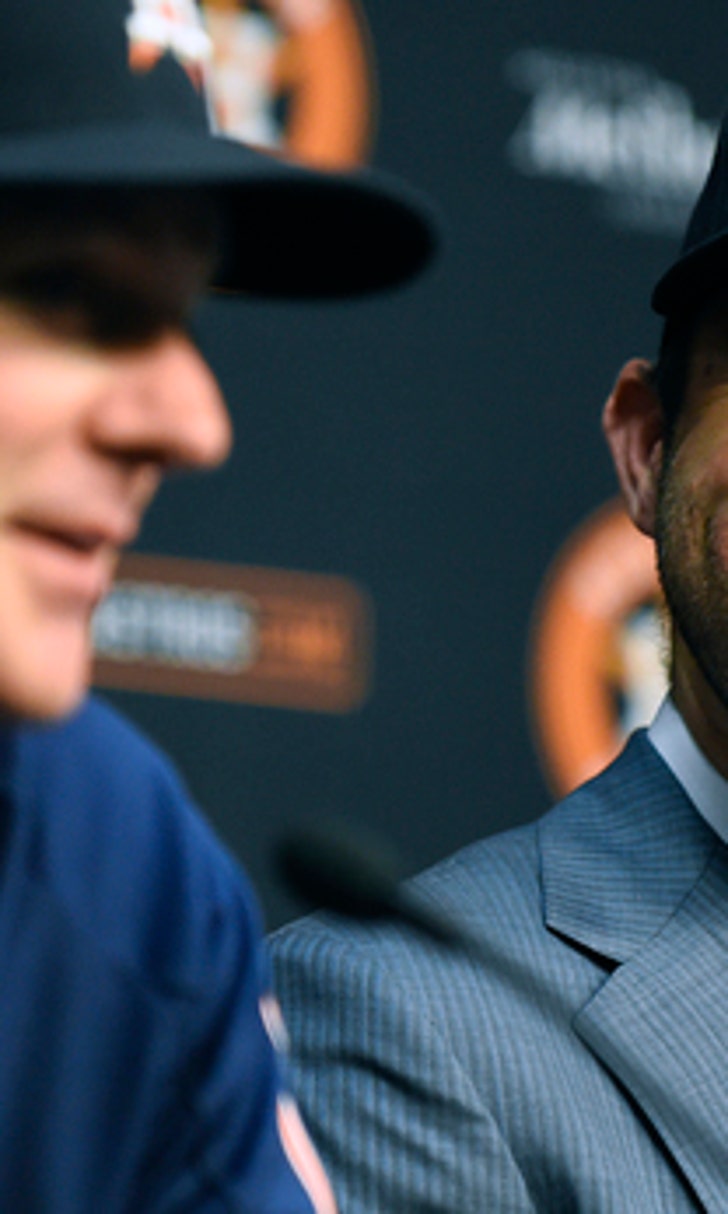 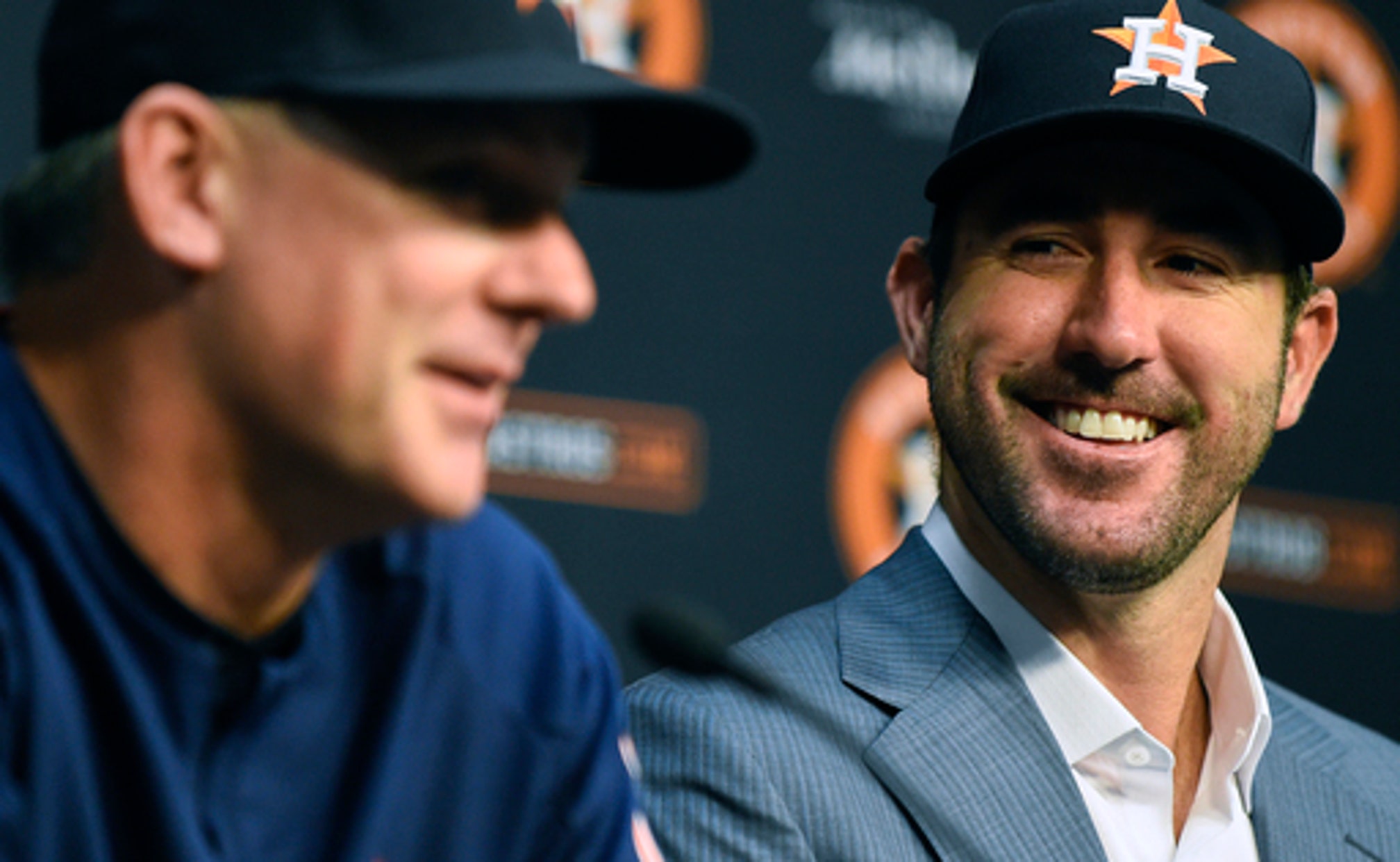 HOUSTON (AP) Justin Verlander only had about 30 minutes to decide whether to accept a trade the Houston Astros.

In the end, he figured he simply couldn't pass up a chance to join the team with the American League's best record.

''Ultimately it came down to winning and joining an organization that is set up to win for a long time,'' he said.

The right-hander was acquired from the Detroit Tigers on Thursday night in exchange for three minor leaguers just before the deadline for having players eligible for postseason play, and was introduced in Houston on Sunday.

''We've done a lot of work since Jim Crane bought the team in 2011 to put this team in a position to potentially bring the first championship to the city of Houston,'' general manager Jeff Luhnow said. ''And adding a top of the rotation-caliber pitcher, All-Star, Cy Young, MVP to our club is exactly what we need to maximize our chances of not only winning this year but potentially in the years to come.''

Verlander beamed as he donned his Astros cap, a different look for the 34-year-old after he spent his entire 13-year career playing for the Tigers. The trade came amid a difficult week for the city after Hurricane Harvey caused catastrophic flooding throughout the area.

''Hopefully we can bring a championship to a city that really could use something like that right now and hopefully I can be a part of that and we can give this city something to rally around,'' Verlander said.

The addition of Verlander bolster's an already solid rotation led by 2015 Cy Young Award winner Dallas Keuchel and Lance McCullers. Keuchel, who voiced displeasure after the Astros failed to make any big trades in July, is thrilled to add another ace to Houston's pitching staff.

''Excitement is an understatement,'' Keuchel said. ''Anytime you get a perennial All-Star and pitcher of this caliber and what he's done it just makes the team that much better.''

Verlander is looking forward to getting to know Houston's pitchers and hopes he can learn from the group.

''I'm excited to work with these guys and see these guys up close,'' he said. ''I think this rotation has a chance to be something pretty special.''

The six-time All Star is a playoff veteran having appeared in the postseason five times. He is 7-5 with a 3.39 ERA and 112 strikeouts in 16 career starts in the playoffs.

He is 10-8 with a 3.82 ERA in 28 starts this season. The Tigers got minor league prospects outfielder Daz Cameron, right-hander Franklin Perez and catcher Jake Rogers as well as a player to be named later or cash in the deal.

Manager A.J. Hinch loves the experience he brings to the team and joked that he was already 2-0 with the Astros after they won both games of their doubleheader on Saturday after Verlander arrived at Minute Maid Park.

''He's a winner,'' Hinch said. ''We've had a couple of seasons here in a row that we're very proud of that are winning seasons and he's going to create more of that for us ... he's as big of a potential impact as we could have imagined.''

Verlander will make his debut for the Astros on Tuesday at Seattle. He's already thought about what it will be like to pitch for team other than the Tigers for the first time in his professional career after he was drafted by Detroit in 2004.

''It will be different in my routine and everything getting ready and just getting accustomed to everything around, but once you step on the mound it's business as usual,'' he said.

Though he won't actually play for the Astros for a couple more days, he has already received a warm welcome from Houston fans, getting a standing ovation on Saturday when he was introduced and shown on the big screen.

''I'm getting goosebumps right now just thinking about it,'' he said. ''It was really a special moment.''

Astros Sting Rays, Force Game 7
The Astros are only the second team ever to come back from down 3-0 and force a Game 7. And you probably remember last time.
2 days ago

Correa Walk-Off Forces Game 6
The Houston Astros are one win away from forcing the ALCS to a winner-take-all matchup, after a big win in Game 5.
3 days ago

Rays Closing in on ALCS Sweep
A sixth inning surge on Tuesday put Tampa Bay just one win away from their first World Series trip in over a decade.
5 days ago

Rays Take Commanding Lead Over Astros
The Astros' bats have gone silent in the ALCS, while the Rays received a little M&M magic in Game 2.
6 days ago
those were the latest stories
Want to see more?
View All Stories
Fox Sports™ and © 2020 Fox Media LLC and Fox Sports Interactive Media, LLC. All rights reserved. Use of this website (including any and all parts and components) constitutes your acceptance of these Terms of Use and Updated Privacy Policy. Advertising Choices. Do Not Sell my Personal Info