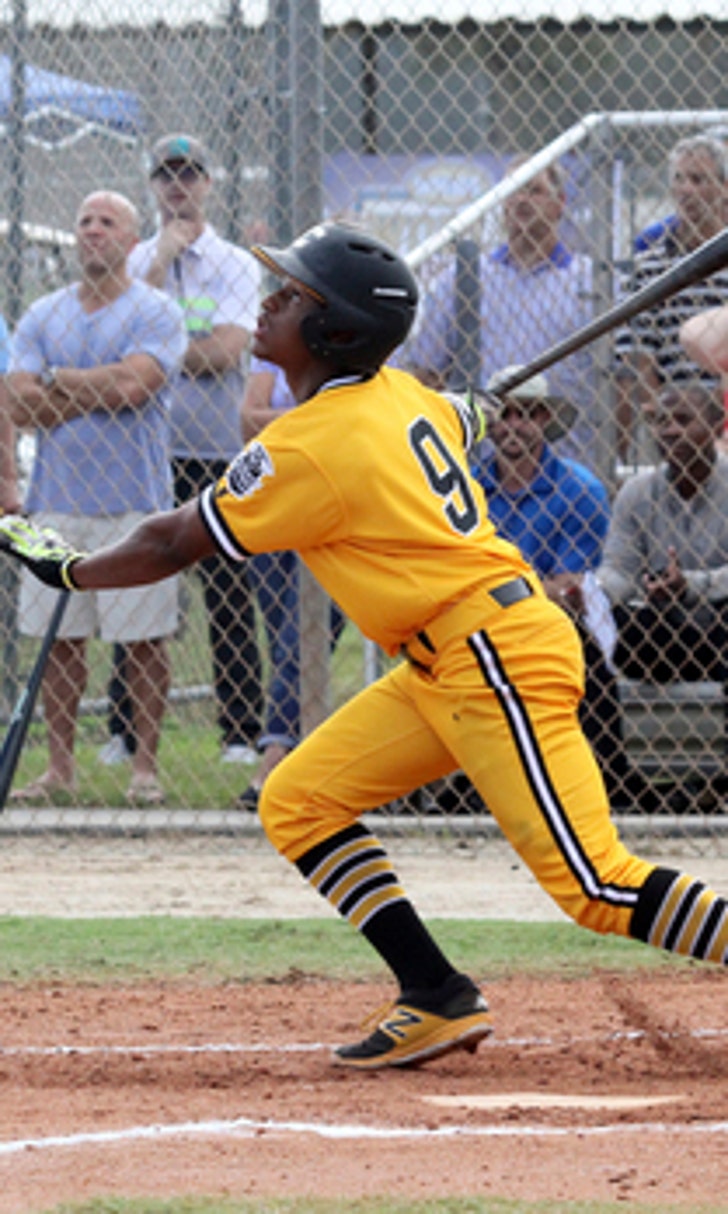 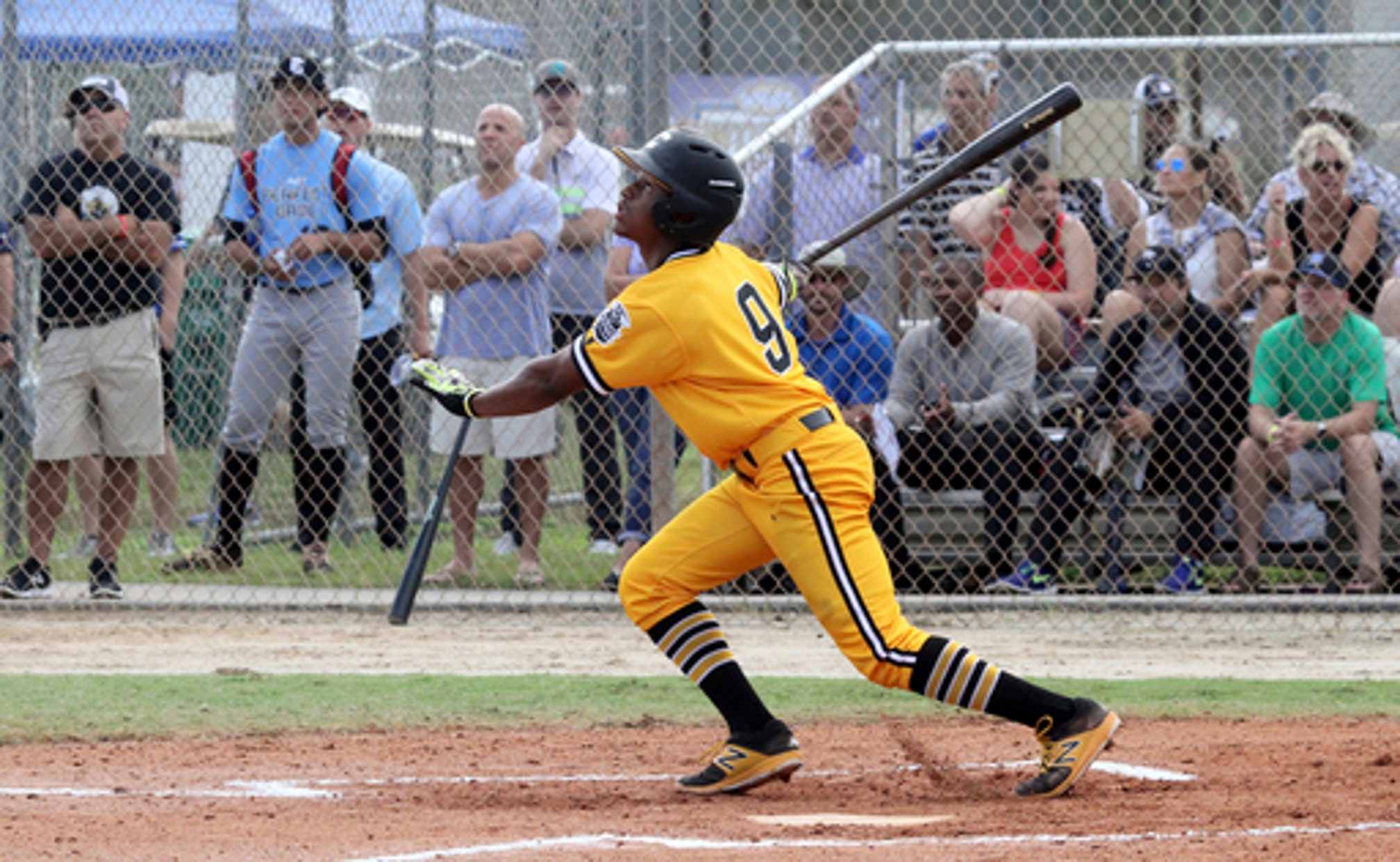 Switch hitters not anymore frequent even in age of analytics

A bona fide switch-hitter, the Florida native is among six on MLB.com's list of top 100 prospects for the amateur draft that starts June 4.

The art of batting from both sides of the plate would figure to be at a premium in this age of shifting defenses and advanced analytics. But in a sport of constant change, the amount remains remarkably steady.

The number of switch hitters with 300 or more major league at-bats per season has been at least 30 but no more than 42 since expansion to 30 teams in 1998, according to the Elias Sports Bureau. There were 33 switch hitters on pace to reach that figure at the quarter mark of this season.

The simple explanation for why it hasn't soared in popularity is because, well, it's far from as easy as Chipper Jones, Pete Rose , Eddie Murray , Tim Raines, Mickey Mantle and a host of others have made it appear.

''Hitting is extraordinarily difficult to do at a high level, and asking someone to do it from both sides of the plate is encroaching on impossible,'' said Brian Sakowski, the national scouting supervisor for the website Perfect Game . ''That's what makes the guys who do it successfully at the major league level so special.''

As of Monday, 48 switch-hitting position players were on active rosters, including Philly with five. In addition, five teams didn't even have one.

This in an era when teams frequently carry 13 pitchers to create favorable right-on-right, left-on-left matchups. Imagine the late-game possibilities if a manger stacked a lineup early with lefties against a right-handed starter and they could turn around to bat right should a lefty be brought out of the bullpen.

Budding switch hitters need plenty of time to learn the skill - and plenty of room to fail.

''Younger kids get discouraged without immediate success and it becomes difficult to see it through to the end result, which could be years down the road,'' said Jones, the Atlanta Braves standout who will be inducted into the Hall of Fame in a July ceremony. ''It takes diligence, more failure than you can imagine and acceptance that the short term must be sacrificed for the long term.''

A top-30 prospect , Edwards began honing his skills as a switch hitter about the time he was old enough to hold a bat. He picked up the skill because his dad, Jovon, was a switch hitter when he was drafted in the fourth round by the Los Angeles Dodgers in 1984.

Nothing was going to derail the process for Xavier Edwards , who's committed to Vanderbilt. Not even times when coaches wanted him to bat right-handed - his more dominant side - against right-handed pitchers for the sake of winning. He and his father stayed the course.

''If the game was close, some coaches would be like, `Hey, let him go to the plate right-handed. When the score is like 10-0, then let him hit left-handed,''' recalled Jovon Edwards, who made it as far as the Double-A level before a broken ankle sidetracked his career. ''As a parent, if you're trying to raise a switch hitter, that's probably the worst thing you can do, because you have to be in pressure situations.''

''I thought many times about quitting from age 7 to age 19. My father and the Braves said quitting was not an option,'' Jones said. ''It became natural and instinctual at age 19, once I was in pro ball. That is a lot of time, failure and heartaches.''

Over the decades, there have been many, many elite switch hitters. From Frankie Frisch to Mantle and Rose. From Murray to Raines and Roberto Alomar. From Bernie Williams to Carlos Beltran and Jones. The current crop includes Francisco Lindor and Jose Ramirez of Cleveland, along with Atlanta's Ozzie Albies.

Baltimore manager Buck Showalter remembers turning Williams into a switch hitter and having the standout from Puerto Rico threaten to go home.

''He came in one day and said, `I'm done, if you make me switch hit,''' Showalter recalled. ''His dad said that he would get homesick. I said, `No problem, Bernie, I'll call your dad and let him know that you're quitting.' He's like, `Oh no, don't do that.' So he got it going. I said, `One day, you're going to thank me for that breaking ball coming toward you instead of away from you.'''

Williams did, too, as he hit .292 against right-handers and .308 versus southpaws over a career with the New York Yankees that saw him earn four World Series titles.

''There was a moment in the winter league - it was down there at the Caribbean World Series - he came over from the on-deck circle, I was over in the stands scouting for the expansion draft, (he said), `I want to thank you for making me switch hit,''' Showalter said.

Switch-hitting infielder Alfredo Griffin was in a similar position in the Cleveland organization. He was playing Class A ball and hitting .080 as a righty. His manager at the time asked him if he could switch hit.

''I told him, `No,''' said Griffin, now the Los Angeles Angels first-base coach. ''He told me to take the next at-bat left handed. I slapped the ball and almost beat it out.''

Similar story with Milwaukee utility infielder Jonathan Villar, who was converted into a switch hitter when he arrived in the Philadelphia Phillies organization in 2008. He added a left-handed swing to take advantage of his speed.

''It's better for me, because I can bunt and when you bat lefty, you're getting two more feet,'' Villar said. ''That's two more feet for a chance to be safe.''

Rockies shortstop Trevor Story toyed around with the concept as a sophomore in high school, but ended the experiment.

''It takes a lot of maintenance to be successful,'' Story explained. ''But if kids are able to do switch hit, I'd encourage it for sure.''

Jeff Petty certainly does. He's in charge of the Evoshield Canes baseball program that grooms players for the collegiate level. Two of his players, Edwards and prospect catcher Anthony Seigler , both switch hit.

''A kid just needs encouragement,'' Petty said. ''Because if you can hit from both sides of the plate with equal success, it becomes very attractive.''