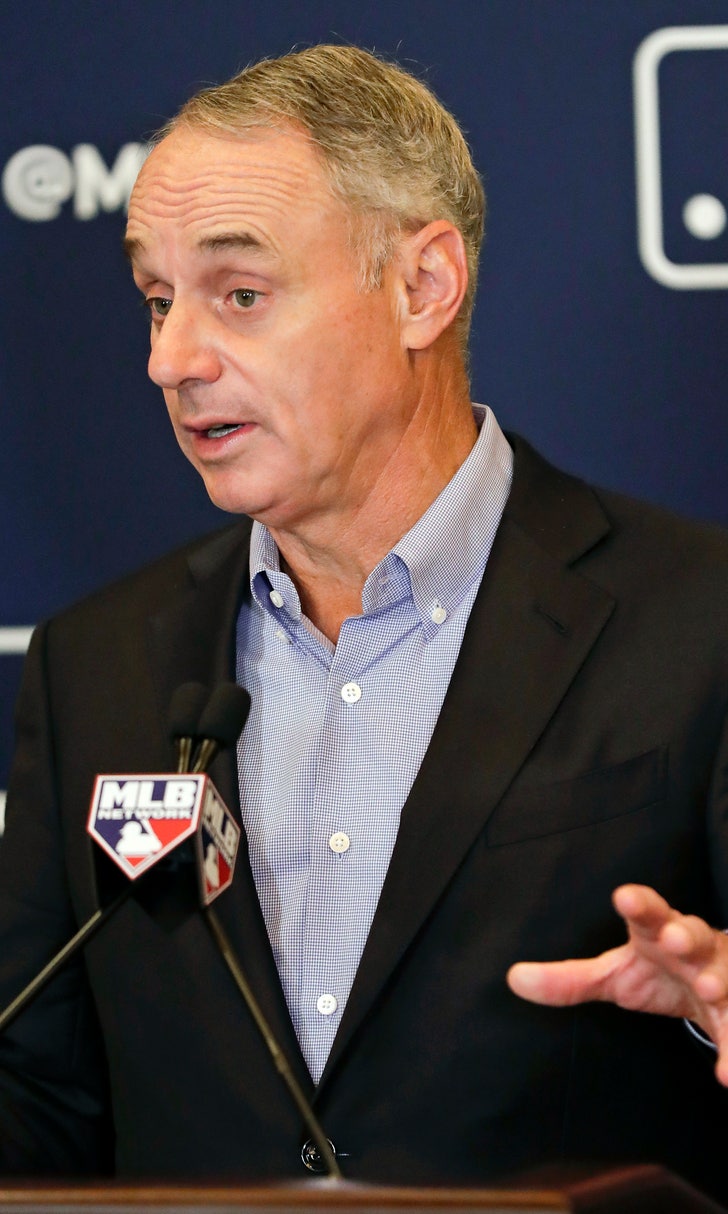 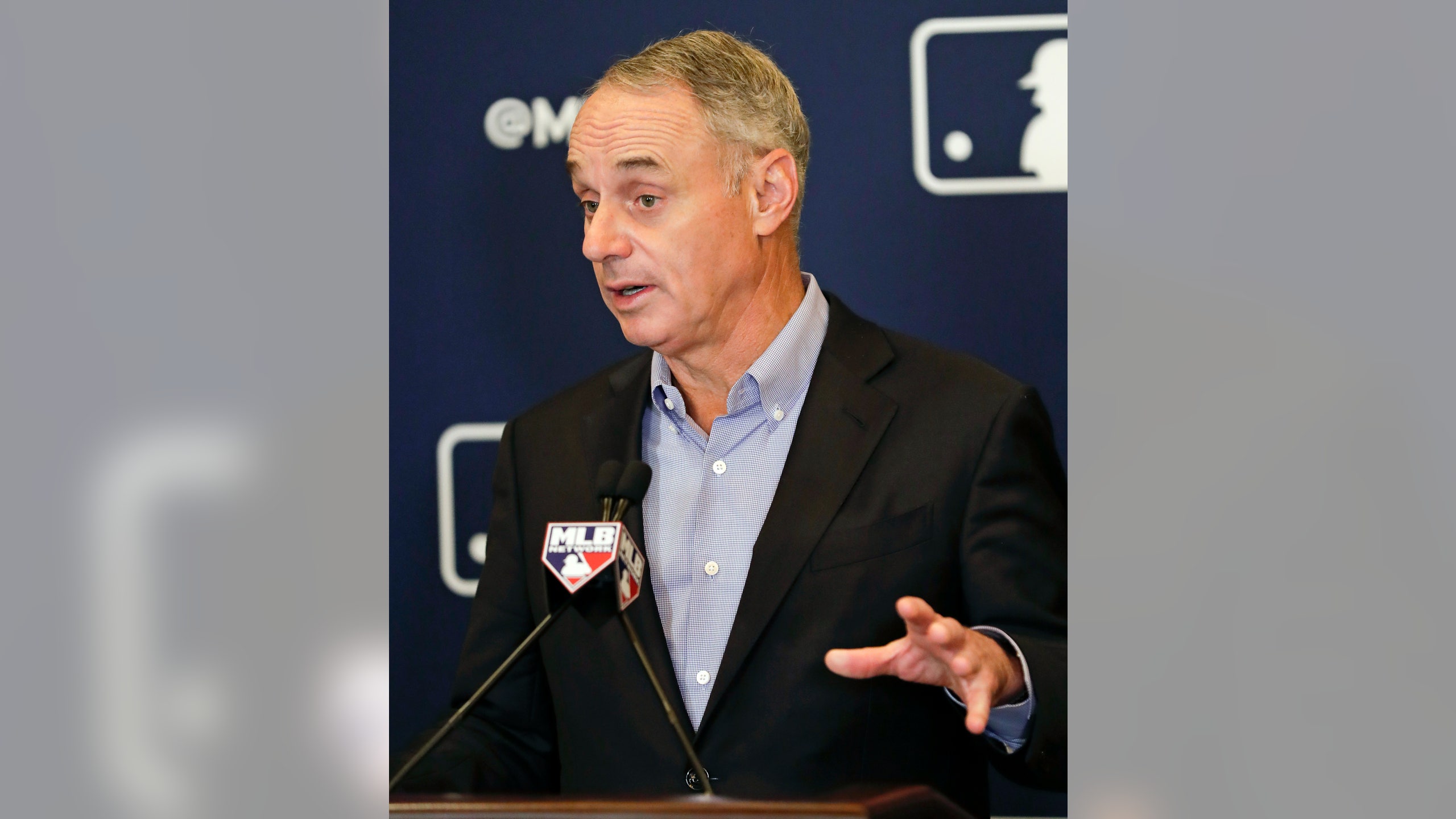 Manfred: Slow market may be ‘much ado about nothing’

"In some ways I feel like it's a little much ado about nothing if in fact those players all sign at the end of the day," he said Tuesday. "The season's going to go on. We're going to have the right players out there playing on the field, and it's kind of no harm, no foul."

Manny Machado agreed hours earlier to a $300 million, 10-year deal with San Diego, a person familiar with the negotiations told The Associated Press. The person spoke on condition of anonymity because the deal was subject to a successful physical.

Machado's deal is a record for a free agent and the second-largest in baseball history behind Giancarlo Stanton's $325 million, 13-year contract.

Bryce Harper, Dallas Keuchel and Craig Kimbrel remain on the market just ahead of the start of spring training games this week. Throughout the major leagues, players have criticized teams for not spending to land top available stars and started to push for significant changes in the collective bargaining agreement, which runs through the 2021 season.

"I do think are a little overblown right now," Manfred said. "I do think it would be helpful if we tried to not sensationalize the back and forth on the individual issues. I think that the dialogue is best conducted in a room between the bargaining parties."

Management has proposed on-field changes, such as a pitch clock and limits on relief pitchers. Union head Tony Clark and his members would like the designated hitter to expand to the National League and changes to the amateur draft to make rebuilding through the draft less attractive. They have criticized teams for failing to try to win now, and Clark on Monday questioned whether some teams justify the cost of their tickets.

"I would urge Tony and the players to save what they had to say for the bargaining table, where we can hear it directly and we can address it and hopefully reach a positive solution for the industry," Manfred said. "I don't think it really helps to subject our fans to all this back and forth."

He defended the rules of the current labor contract,

"We bargained for a market system. We have smart, aggressive negotiators on both sides. A completely predictable tactic is to use timing as a point of leverage in those negotiations on both sides," he said. "It's not like this is some unexpected result."

Manfred said there had been a split of opinion on whether rules changes are needed to counter offense-suffocating defensive shifts.

"I think there is substantial sentiment within the game for the idea that eliminating the shifts, or limiting the amount of shifting that could be done, might be a positive for the game," he said. "There is another group, however, who believes that the game will self-adjust in response to the shift and that we're better off leaving it alone. We're in the process of trying to get a consensus between ourselves and the players' association as to how to best handle that issue."

Management made the unilateral decision to experiment with pitch clocks during spring training and has the right to order them for the regular season but prefers to reach an agreement with the union.

Asked that he would like to see in five years, Manfred mentioned expansion.

"I would like baseball to be in the midst of exploring whether we could get to 32 teams either by adding additional teams in the United States but also open to the idea of Canada, Mexico as possibilities," he said. "I think 32 opens up the opportunity for a substantial rethinking of our format and postseason format, meaning realignment, as well as reconstruction of divisions. Maybe even geographical realignment."

He said management and the union continue to discuss how to handle service time for young players. There remains a pending grievance over the Chicago Cubs' Kris Bryant, who was brought up in 2015 on the day his free-agent eligibility was pushed back from after the 2020 season to after 2021. There has been speculation Toronto will act similarly this year with Vladimir Guerrero Jr.

"Clubs have always — and it should be this way — had the right to decide who's going to be on their roster at a particular point in time," Manfred said. "It's hard to figure out a mechanism that you can impose on top of that really fundamental right that gets you to the result that you may want to achieve."

He praised the use of relief pitchers as openers by Tampa Bay and Oakland last year but said lesser prominence for starting pitchers, often used by teams for marketing, is a concern.

"They're thinking outside the box, they're innovating and in most businesses, innovation is seen as a good thing," he said. "It is an example of smaller-market clubs trying to put themselves in a position to be as competitive as possible."