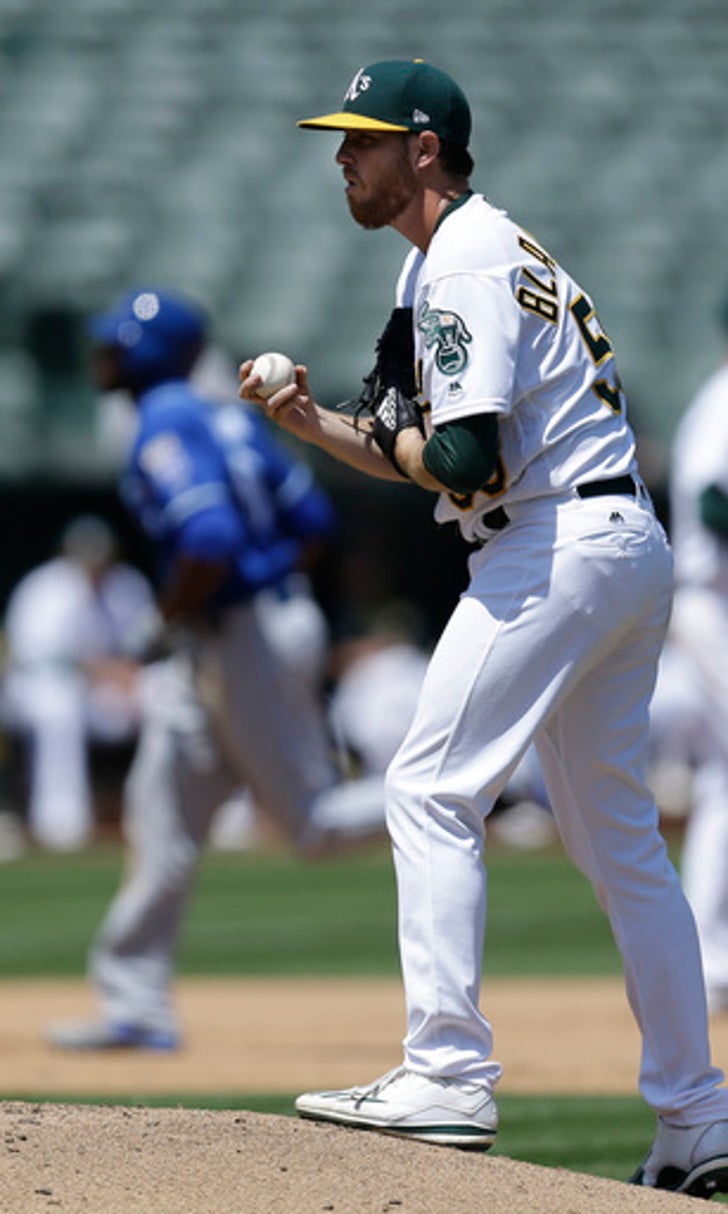 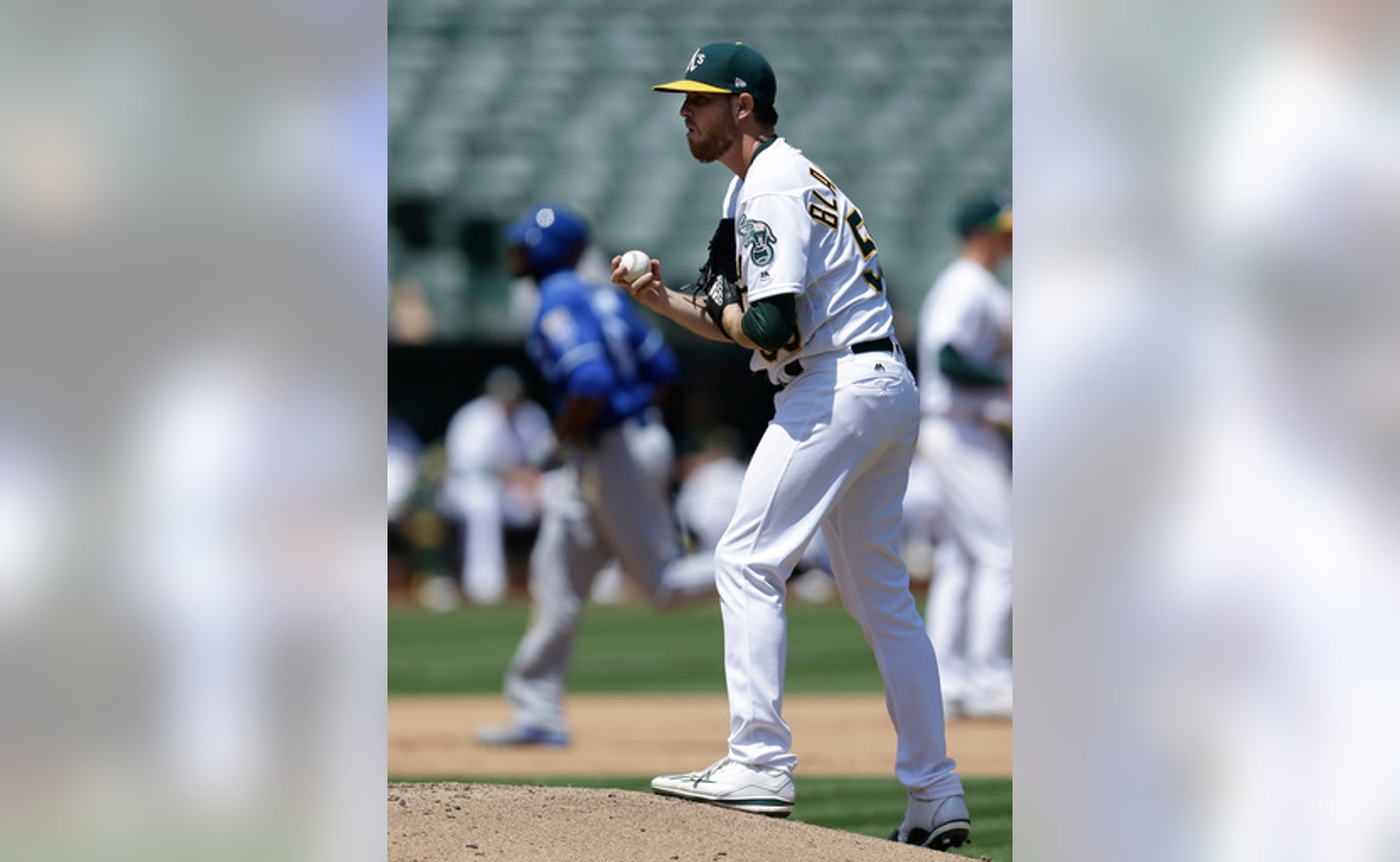 OAKLAND, Calif. (AP) The Kansas City Royals could have headed home with another squandered late-inning lead and far less momentum as they prepare for an important weekend series against first-place Cleveland.

This time, the Royals gave it up again before rallying once more.

Alex Gordon hit a go-ahead RBI single in the top of the ninth after Oakland tied it in the bottom of the eighth, and Kansas City beat the Oakland Athletics 7-6 on Wednesday.

Alcides Escobar doubled to start the ninth against Blake Treinen (1-1), matching his season high with three hits. Then Gordon delivered his second run-scoring single of the series finale as Kansas City won its fourth in five following a five-game skid.

''Today was a step in the right direction for us,'' Royals starter Danny Duffy said. ''It's huge. We had a pretty decent roadie.''

Oakland's Matt Chapman hit a tying two-run homer in the eighth against Brandon Maurer (1-1), who wound up the winner.

Lorenzo Cain hit a two-run homer in the fourth and Duffy struck out eight over five innings, but the Royals needed clutch hitting in the ninth a day after giving up a four-run lead in a 10-8 defeat.

''This was a big win for us today, especially after last night,'' manager Ned Yost said. ''Games like last night can cease your momentum, so to come back and show the heart and the ability to grind a tough game out like our guys did today was very satisfying.''

Cain added a key RBI single in the eighth for the Royals, who began the day tied with Minnesota six games behind the AL Central-leading Indians.

Kelvin Herrera finished for his 26th save in 29 chances after allowing Ryon Healy's two-out infield single.

Duffy's winless stretch reached four outings since a victory at Detroit on July 25. The left-hander earned his first major league win at Oakland on June 14, 2011, and has never lost to the A's - 3-0 in seven career appearances and six starts - but hasn't beaten them since April 10, 2012.

Marcus Semien hit a two-run homer in the third and Oakland got back in it on Jed Lowrie's two-run single in the fifth.

''It just was an ugly game all the way around,'' A's manager Bob Melvin said. ''There was no pace to the game, and it just seemed like one of those games that was just blah.''

Kansas City's Melky Cabrera fouled a ball off his leg in the third and went down writhing in pain before recovering to hit a single on the very next pitch to load the bases with no outs. But Blackburn struck out Mike Moustakas and induced an inning-ending double play from Brandon Moss to escape unscathed.

A's starter Paul Blackburn was tagged for eight hits and four runs in four innings of his first career start against Kansas City, striking out two and walking three.

The A's acquired lefty Sam Moll from Colorado for a player to be named later or cash then optioned him to Triple-A Nashville. Oakland added right-hander Chris Hatcher to the 25-man roster and he made his A's debut in the sixth inning, a day after coming to Oakland in a trade from the Dodgers. The A's optioned righty Josh Smith to Nashville and designated righty Zach Neal for assignment to clear 40-man roster space to add Moll.

Royals: RHP Joakim Soria - who allowed four straight hits in the eighth inning Tuesday night - is scheduled for an MRI on Thursday after stiffness in his lat and ribcage area to determine when he can pitch again. The reliever showed up to the Coliseum with discomfort. ''He's been battling with it for two weeks, he's been pitching through it, he's been pitching very effectively through it,'' Yost said. ''But after last night he showed up more so than usual.''

Athletics: Josh Phegley (strained left oblique) was slated to catch five or six innings in a rehab game for Triple-A Nashville at Tacoma. ... OF Jake Smolinski, on the disabled list since March 30 recovering from right shoulder surgery, isn't expected to be able to play in the outfield until ''well into September,'' Melvin said.

Royals: RHP Ian Kennedy (4-8, 4.80 ERA) starts Friday at home against the first-place Indians trying to snap a 14-start winless stretch at Kaufmann Stadium since a victory vs. Minnesota on Aug. 20 last year.

Athletics: Following Thursday's day off, LHP Sean Manaea (8-7, 4.59) starts at Houston on Friday looking to end a five-start winless stretch in which he's 0-2 since beating Cleveland on July 16.